The highlight of today’s voyage was seeing the mighty Mississippi River from the lookout on Highway 52, followed by actually crossing the river as we went from Iowa into Illinois.

Weather – initially clear with cumulus clouds, but more hazy as we reached our destination

Yet again we had a few options for the route to Rockford, the easiest and longest being straight along the I-90. However, this morning we elected to be adventurous and take the shorter local roads, including the glimpse of the mighty Mississippi. 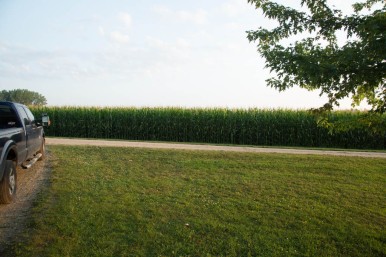 Got Judi up about 07:00 and as we had been here for 4 days had a bit more packing to complete, so finally hit the road about 08:30. As can be seen the sites are wide open, so real easy departure.

On departing the campground we took the local road to Austin, joining the I-90 East for a few miles before heading South on County Road 56. We spent 30 miles on this road, then onto US Hwy 63, where we immediately crossed into Iowa. Having been on the road for an hour we found a pull over to stop to give the dogs a quick walk. Then it was onto Hwy 9, which wasn’t the best road we have driven over. At Decorah we switched to Hwy 52, which would take us passed the Mississippi Riven and down to the main East/West Hwy 20.

Mississippi panorama from the lookout on Hwy 52 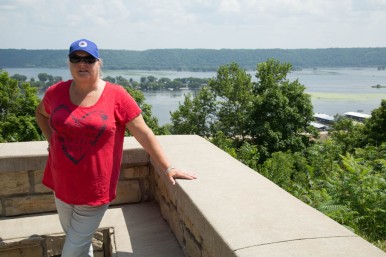 We stopped for lunch at the Mississippi River lookout, wow what a great view of this mighty river, that must be at least 1,000 miles from the Gulf.

After lunch we continued down to Hwy 20, where we headed East, shortly crossing the river, leaving Iowa and entering Illinois. We passed through Galena, the home of past President Grant and numerous historical homes. This is definitely a place to return for a future visit.

On arrival at the campground, we were faced by a really steep hill down into a valley by the adjacent river. It’s going to be fun leaving tomorrow.