Our niece Kathryn invited us over for dinner at their house in Orangeville, so we decided to go play tourist in the surrounding area for the day. We had already researched the area, so on the agenda was – Island Lake Conservation Area, Hockley Brewery and Orangeville downtown carvings.

The Island Lake Conservation Area, located in Dufferin Country adjacent to the towns of Orangeville and Mono, is a very picturesque conservation area operated by Credit Valley Conservation. It is located on the shores of Orangeville Reservoir, or Island Lake and is a natural oasis in the middle of Metro Toronto suburbs. The park encompasses 332 hectares of lake, wetlands, forest and meadows, which play an important role protecting the headwaters of the Credit and Nottawasaga Rivers. Being a source of underground water, it feeds clean filtered water into the local rivers.

At the park entrance we paid the fee of $5.00 each and the young lady advised that due to wind, no boats would be going out today. Entering the parking lot adjacent to the lake I expected to see trees leaning over and wind waves crashing on shore; alas, all we saw was a gentle ripple on the water. Back in the days when I worked, I can only wish we operated with similar restrictions, as I would never have actually left port.

The park has a number of trails although at present you cannot completely circumnavigate the lake by trail, although the final connecting trail is planned and will be constructed when funds are available. We elected the trail originating at the parking lot that leads along the lake to the bridge, which was about 1.5 miles in each direction. 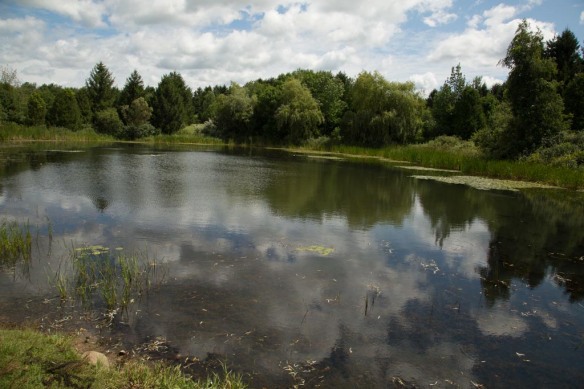 The above photograph is of the small lake we walked around, immediately after leaving the parking lot. The trails are level and very well maintained and are a mixture of open and canopied forest.

Judi and Kona in a canopied section of the trail

The vegetation was completely natural, with lots of tall grass blowing in the wind.

Adjacent to the lake with long grass blowing in the wind

After a very pleasant, slow stroll, with the dogs, through the conservation area we arrived at the bridge across the lake.

The bridge is about 2/3 of the way up the lake and affords excellent views in both directions up and down the lake. 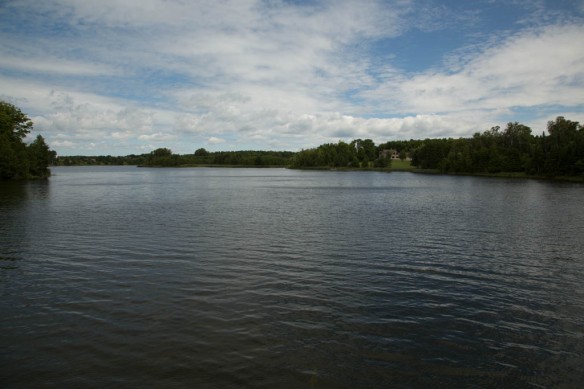 Looking to the lake head from the bridge

Island Lake looking towards Orangeville from the bridge

Judi on the bridge 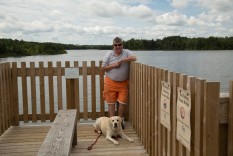 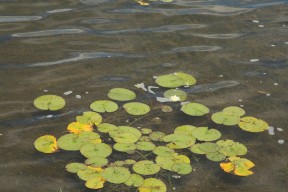 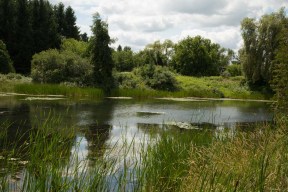 After another slow stroll back to the car we were feeling rather peckish, so time for lunch. Perfect timing, so off to the brewery.

The GPS didn’t list the brewery, but having researched it on Google, I had a reasonable idea where to find it. I had taken a quick look at their website, which indicates tours, tastings and a Hockley Gourmet, so we expected to find a good sized brewery. Well, on arrival, surprised was an understatement.

Located in an industrial strip mall it consists of an office and a back room, where they make and bottle/can the beer. Tasting room? – nope, not even close. They fetch a can and provide you about 1 oz in a plastic cup, while standing in the office. Lunch was definitely not a possibility, so we had to rethink our plans.

Thanks goodness for the GPS, as we checked for local pubs, finding one just off the main street. On arrival, the street was blocked off so we headed on a detour of about 3 miles. Finally we approached the pub, which was located on the back streets just off the main street, but our next issue was parking. There were very few spots and definitely none that would handle our F350 CC. So, yet again another change of plans as we decided to head to a diner we noted on the main street during the detour to the pub.

After a spectacularly unimpressive snack, which didn’t include a pint as they only had yellow beer, it was time to head to Kathryn’s, so we gave up on walking around downtown looking at the tree carvings.