Top of the Falls from the shop building

Finally the day had come that we planned to walk the Falls by day and night; while we enjoyed the previous drive past, we just couldn’t wait to stand by the river bank and actually feel the spray and be deafened by the thunderous roar. We had a beautiful warm and sunny day, but this presented a challenge, as we aren’t comfortable leaving the dogs in the car, even with windows open. Therefore, our plan called for a number of trips down to the Falls and back to the campground at least every four hours to let the dogs out.

Our day started with a trip to the local Tim Hortons for tea and to use the internet, since the campground WiFi is hopeless. Having spent a couple of hours checking up on the news we headed back to the campground to check on the dogs and take them out for a walk.

Finally we were ready to drive down to the Falls, so we jumped in the truck and headed for town. We took the Clifton Hill down to the Falls and we can only describe the immediate area as tourist tacky. Fortunately we passed it quickly and turned onto the Parkway heading for parking. We used the lot just above the Falls – they charge $20 per day and permit multiple entries, which works for us. Arriving at the river bank, above the Falls, this is the view up river towards the control barriers.

Looking up river from the Falls

This is the view down river from about the same location, looking over the top of the Falls at the Rainbow Bridge. 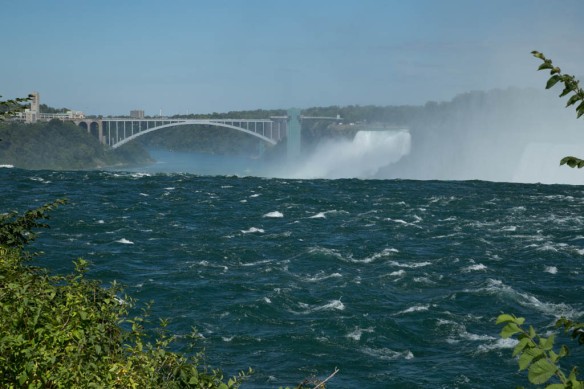 Looking down towards the Canadian Falls and the Rainbrow Bridge 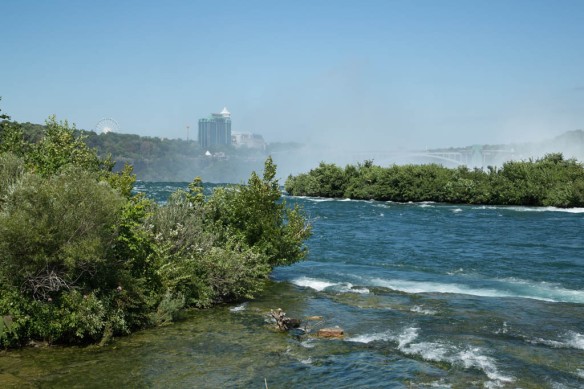 Looking up the Niagara River from the Falls 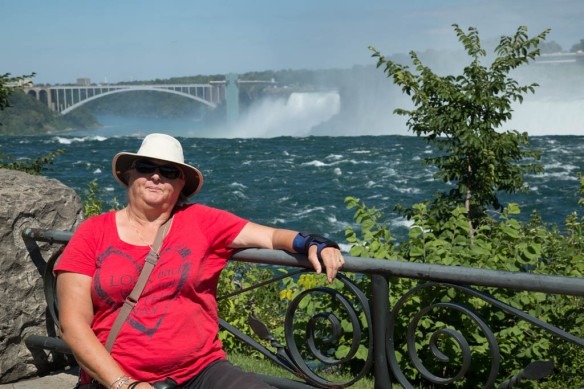 Judi with the Falls and Rainbow Bridge in the background

Andy with the Falls and Rainbow Bridge in the background

Continuing to walk down river we eventually passed the Falls and the environment was simply breathtaking, the spray everywhere and the roar of the Falls sounded like thunder.

Canadian Falls close up from the top

On reaching the Welcome Centre we got tickets for the 15:20 Behind the Falls Tour, which was about 45 minutes away. Judi found some shops and got the urge to spend money, so she went shopping while Andy wandered further down river towards the U.S. Falls.

US and Canadian Falls

US Falls and tour boat 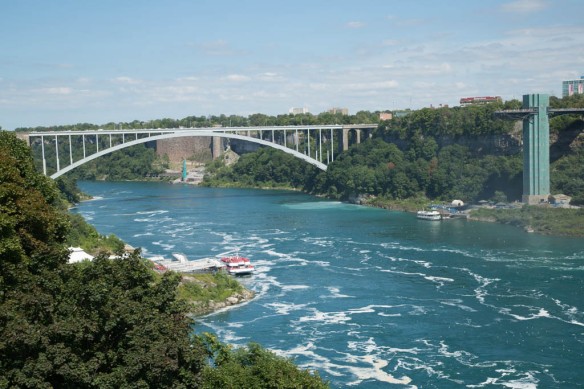 Rainbow Bridge and US observation platform

Looking up river at the Canadian Falls

At the appointed time we joined the queue for the Journey Behind the Falls, which was definitely worth the one hour and cost of two tickets. On entering the facility you are issued with a poncho – 1 size fits all, which was a very fashionable bright yellow. You then follow the line until eventually reaching the lifts, which take you about 125 feet down to the base of the Falls. The view is even more spectacular at the base than from the top. 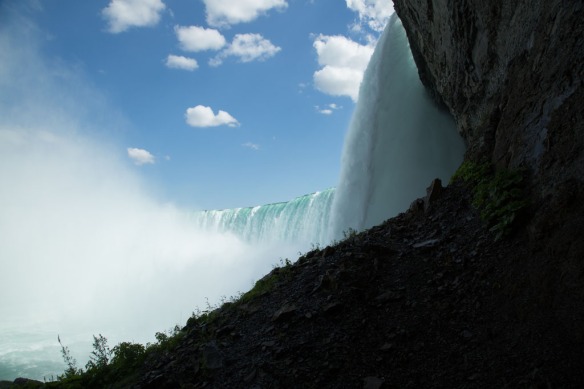 The Falls from the upper viewing platform

The Falls from the viewing platform 2

Returning to the surface we noted the rainbows were now out in full force.

That was amazing, but all hot and sweaty we decided to head back to the truck and return to the campground to check on the dogs. We took them for a walk, gave them an early dinner and spent a few hours with them before returning for dinner and a view of the Falls at night. For dinner we were considering the buffet in the revolving restaurant or the Keg. Once parked we took the inline railway up the hill to hotel row and noted the Keg was right there in the first hotel. Decision made, it would be the Keg. Arriving at the hostess desk she advised it was a 1 hour wait for a table along the window or you could sit in the lounge in a couple of minutes. Since it was already 19:00 we elected the lounge. The already substantial Keg prices are inflated, similar to Whistler and while the meat was good and tender the other items could have been better.

When we left the Keg it was already dark, so we headed back down the incline railway to get a good view of the Falls at night. Getting a clear photograph was challenging as the spray was being blown over to our side of the river. 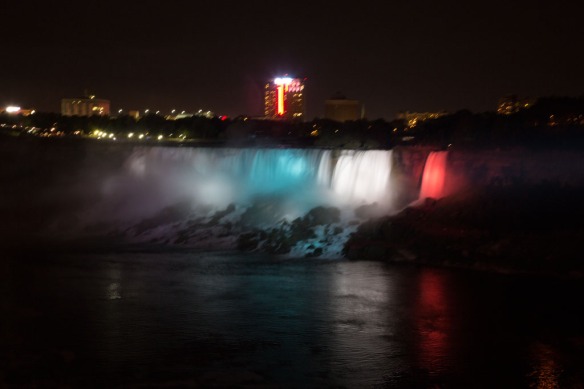 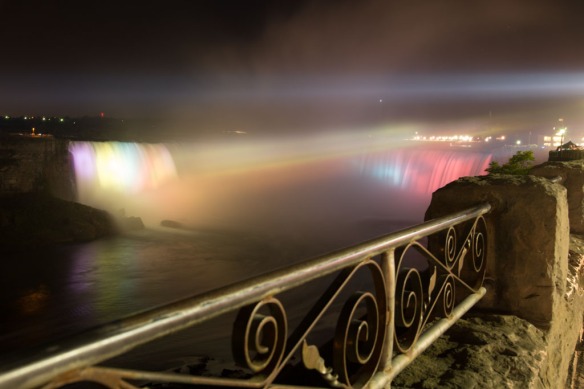