Fort Erie entrance to the museum

Our plan for today is to drive the Niagara Parkway, which follows along the entire river from Fort Erie north to the small town of Niagara-on-the-Lake. We were pleasantly surprised, as it is one of the rare water front roads that predominantly runs along the banks of the river affording spectacular views. Today’s agenda includes a tour of Fort Erie, drive along the river to the Falls, followed by stops at the whirlpool, Queenston Heights Park, Brock Monument, McFarlane House, Fort George and a walk around Niagara-on-the-Lake. A rather busy day of sightseeing; read on to find out if we achieved all our goals.

View of Buffalo across Lake Erie

We departed the campground after breakfast and headed along the QEW to Fort Erie, where we took the final exit before the bridge to the U.S. Once clear of the motorway we headed along the shores of Lake Erie until arriving at Old Fort Erie. The signage wasn’t the best so we parked along the shore line below the fort. Before heading to the fort we took the dogs for a short walk along the beach, enjoying the views across the lake of Buffalo, NY. Since it was overcast, we dropped the windows and left the dogs in the truck while we headed over to the fort. At the entrance we discovered the fort’s parking lot.

Shortly after trading our passes for visitor stickers we joined a tour conducted by a guide dressed in period costume. The tour started with an informative short film about the War of 1812, and the taking and siege of Fort Erie. We left the film theatre and our guide commenced the walk around the grounds, with a discussion on the cannon used by the British troops who laid siege on the Fort.

The tour then proceeded across the moat and drawbridge to enter the Fort, where we were treated to a live fire exercise with the smaller of 2 cannons. Two cannons are situated on a platform just outside the inner gate, the smaller cannon still functions, but the larger cannon, which could hit Buffalo, is not safe for use. The live fire exercise is conducted by a team dressed in period costumes and is performed very professionally, with all safety concerns being addressed.

At this point the tour continued into the Fort, but the skies had cleared and we were concerned about the dogs, so Andy ran back to the car while Judi continued with the tour. While not in danger, the truck was starting to get warm even with windows well down, so I decided to move the truck up to the Fort parking lot, finding a shady spot. After giving them some water I returned to the tour.

The following photographs are from the rooms inside the Fort. This is the officer’s messroom, a comfortable space that is paid for by the officers from their salaries.

Officer’s Galley, where the officer’s paid one of the enlisted men to be the cook. The shortbread on the table was cooked in the oven and was as good as mother made. We all sampled a piece of the shortbread.

Doctor’s office and hospital ward, with 2 bunks and an operating table. The display case exhibited the primitive tools the doctors used in the 1800’s.

Quarters for the Fort’s Commanding Officer and his family, with the bed having been preserved by the family and donated back to Niagara Parks.

On completion of the tour through the barracks and other rooms, we were treated to our 2nd live fire exercise, this time it was muskets. This exercise was again performed by people dressed in period costumes and was performed with the utmost professionalism and safety. Reloading the muskets after the first volley.

The musket firing concluded an exception tour of the fort.

View from the large cannon

Judi at one of the displays 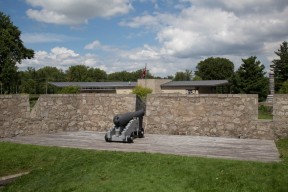 Cannon looking towards the museum

On leaving the Fort we drove along the banks of Lake Erie to the end of Lakeshore Drive. This is the view looking West along the lake. 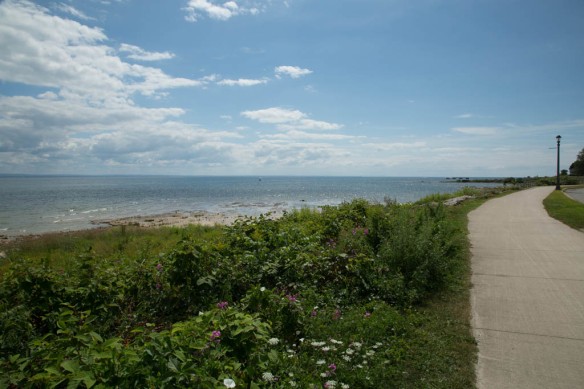 Lake Erie looking West across the lake from Lakeshore Road

Having spent way longer than expected at the Fort we cancelled the Railway Museum and headed towards the Parkway, crossing beneath the bridge over to Buffalo. Wow, the current passing the bridge trestles was exceptional, there is a considerable volume of water moving from Lake Erie to Lake Ontario. Wasn’t able to stop and photograph the current at the bridge, but this was taken from just after the railway bridge. The current here is also considerable. 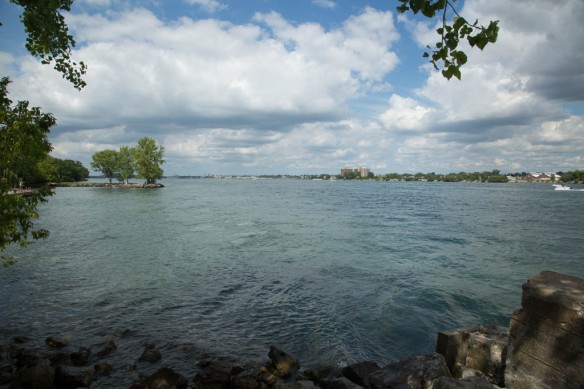 On clearing the town of Fort Erie the Parkway consisted of the river and a grass verge on one side and a single row of homes on the other. It was simply a spectacular drive with beautiful scenery on both sides of the road.

View along the Niagara Parkway

Homes across the road

View along the Niagara Parkway 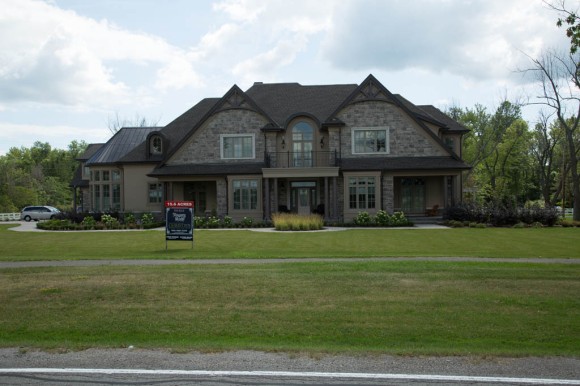 Having already scouted Kingsbridge Park and the Falls, we drove onto our next stop – Niagara Whirlpool

We pulled into the Thompson’s Point view point, located above the whirlpool and aero car. The whirlpools are located at a bend in the river and consist of significant rapids.

Thompsons Point – Niagara Whirlpool and Aero Car across the river

Thompsons Point – Judi with the river in the background

Shortly after passing the Ontario Hydro generating plant we saw a sign for a Floral Clock. This is something we hadn’t read about, so decided to check it out. Unfortunately I couldn’t get any elevation for a better aspect photo.

We took a drive around the park, which is well laid out and has lots of parking. It is well used by families enjoying the sunshine. BBQ’s were everywhere, so it is obviously a great location to enjoy a picnic and/or BBQ. They even had a covered pavilion filled with picnic tables for the not too sunny days. The parking lot adjacent to the Brock Monument was full, so we elected to drive around to the rear entrance. 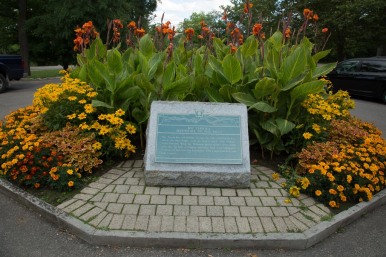 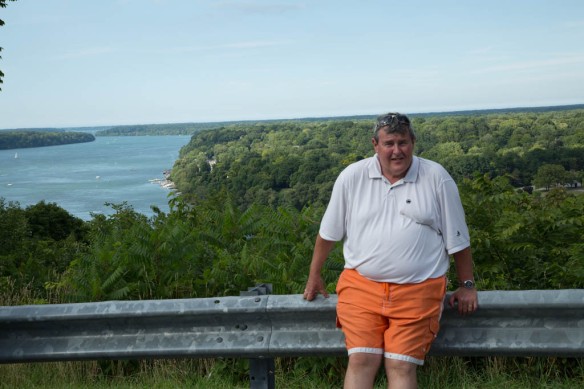 Unfortunately the last tour was 16:00 and we were too late, since we spent so much time enjoying the previous stops. 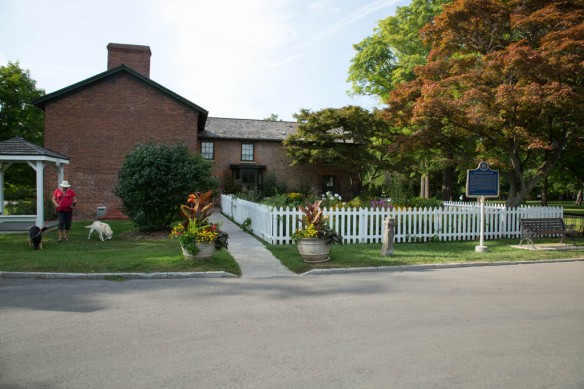 Similar to our previous stop, the Fort was closed for the day by the time we arrived, so this will be added to the list of places to visit the next time we are in the Niagara area. We continued on to Niagara-on-the-Lake, which is a quaint, touristy town, but does not have much parking for full sized trucks. Therefore, as we were getting some hunger pangs, we decided to have a quick drive through town and head for the Irish Pub close to the campground for dinner.

Judi offered to drive home so Andy could enjoy a couple of hopped beverages. What else would you have in an Irish Pub, but Guinness, which for a touristy place was actually good. For the 2nd pint I decided to try the local IPA they had one tap. Lots of flavour, bit lighter than the Guinness, but definitely enjoyable. Oh! yes we did have food, but the quality was definitely on the lower side of average.

A thoroughly enjoyable day we headed back to the campground to rest up for tomorrow’s excursion for a close up look at the Falls.