Judi having lived in Nova Scotia is very familiar with Halifax, but that was many years ago back in the 70’s, so it could have changed. Andy, however, never made it to Halifax during his deep sea days with his only experience being a couple of trips to play in the navy simulator in Victoria. Therefore, we were both interested to compare Canada’s premier East Coast port to Vancouver. How did it turn out? 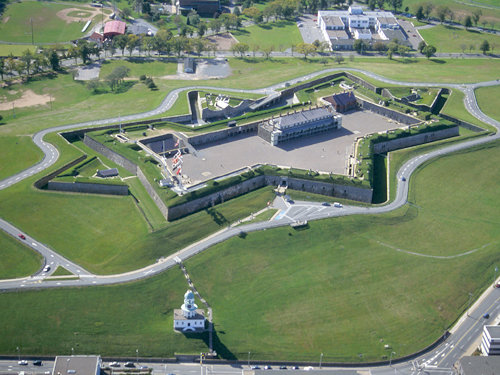 A Parks Canada National Historic Site, Fort George is the fortified summit of Citadel Hill, which lies just on the edge of downtown Halifax. This is the first difference, history, Halifax has some real history dating to the 1700’s. While the current fortress was completed in 1856, this is the 4th such structure on this site, with the first being completed in 1749. 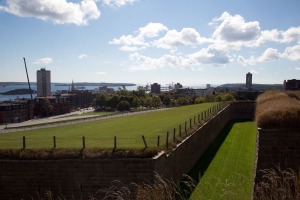 Driving through the gates, at the bottom of the hill, the view is unlike any fortress/castle we have ever seen previously. Most are built on a hill, cliff or other promontory, with the structure standing proudly above the land. In this case, it is almost like the fortress is built into the summit of Citadel Hill. We noticed lots of cars parked on the streets at the bottom of the hill, but don’t see any parking lots on the hill. Street parking for a F350 CC & 8′ bed is challenging, so we drive up the hill to check it out. Shortly, we arrive at the main gate, which has a couple of spots for busses, but no car parking. Becoming demoralised, we continue and eventually find a small booth and a parking sign at the rear of the building. We can only assume that parking signs were a Parks Canada budget cut.

Even more importantly, it is a dog friendly attraction, so we can take the dogs everywhere, except into buildings. So off we went, on entering we found a large star shaped fortress that is almost hewn into the summit, surrounded with a moat and topped with ramparts around the outer edge. A tour was just about to start so we ambled over to the meeting point to check it out.

Didn’t get a good connection with the guide at the first few stops and as it would include all the buildings, we decided to head out on our own. Probably a good decision.

First we toured the buildings, so Andy held the dogs while Judi perused inside, including, you guessed it, the gift shop. Here is a panorama view of the fortress.

Then we climbed the stairs and walked around the ramparts, enjoying the vistas of Halifax and the surrounding area from all sides of the fortress. 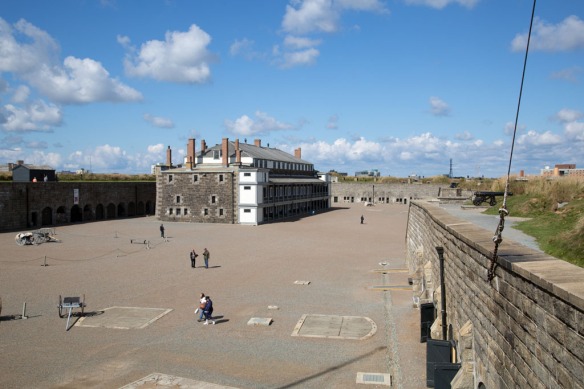 When we finished strolling around the ramparts it was about 1140, or a mere 20 minutes before the firing of the Noon cannon. Well we’re in no rush, so we found a reasonably comfortable place to sit and wait for the big moment. Here is Judi sitting at the signals station hut waiting for Noon. 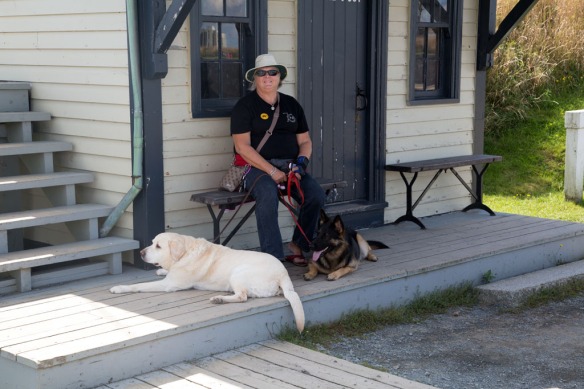 Their timing was impeccable, with the cannon exploding with noise at precisely Noon. This is the cannon used for the Noon signal.

Yes, we found our first similarity to Vancouver, as Halifax is a cruise ship port, with 2 ships in port today – a Fred Olsen ship and another from Crystal Cruises. Halifax is one of the ports of call on our World Cruise next year, so we wanted to scope out the passenger terminal and surrounding area. Similar to Vancouver it is adjacent to downtown and a container terminal. The Maritime Museum is close by, so we elected to forgo that attraction, this time, and check it out while in Halifax on the cruise.

Similar to Vancouver’s Stanley Park, this is a natural oasis of grass, trees and hiking trails at the harbour entrance. We drove through the port to a headland surrounded with water on 3 sides. It had a large parking lot at the entrance, with a small beach. Unlike Stanley Park you cannot drive around, but it has an excellent network of hiking trails.

However hunger pangs were rumbling, so we elected to go find a restaurant on the waterfront.

We found a large parking lot with spaces of sufficient size to fit the truck right on the waterfront, on the edge of downtown. After a short walk we found the Waterfront Warehouse, a restaurant/pub with a patio affording waterfront views. Excellent beer, but poor food was the result of this lunch. Andy tried a pint of Propeller IPA, a beer brewed by a local micro brewery in Halifax. Very nice, will need to check the Liquor Stores for other beers from this brewery.

After lunch we rescued the dogs from the truck and went for a stroll along the waterfront. One of the attractions we saw was an old Canadian Corvette, which is now a museum and open to the public. Problem was it was painted in a white and sky blue colour scheme. Warships are grey, it looked ridiculous, needless to say we didn’t go aboard.