Peggys Cove, located about 25 miles SW of Halifax is probably most famous for the lighthouse, but it is also a functioning fishing village and so much more. A collection of small brightly coloured homes built around the small harbour on the barren landscape, the village has a very small resident population of only 35 people.

Read on to find out more.

Peggys Cove is almost a magnet for tour buses, so we decided to avoid it during the morning and early afternoon, so we left the campground about 1600. Enroute we stopped at the Swissair Memorial.

Flight 111 was a McDonnell Douglas MD-11 on a scheduled service from JFK New York to Geneva, Switzerland. It crahed about 5 miles off-shore, while attempting an emergency landing at Halifax airport.

The memorial is built on barren landscape close to Peggys Cove. An ample parking lot is directly off the highway, with the memorial accessed along a well marked 1/4 mile path. The short hike to access the memorial just extenuates the moving experience, especially when looking though the slits in the memorial, which point to the location of the crash site, a mere 5 miles off shore.

Pegys Cove, as viewed from the Swissair Memorial

The first recorded name of Peggys Cove in 1766 was Eastern Point Harbour or Peggs Harbour, with the village marking the eastern point of St Margaret’s Bay. A number of myths speculate as to the origin of the name, but it is believed to be named after St. Margaret’s Bay, with Peggy being an accepted nickname for Margaret. 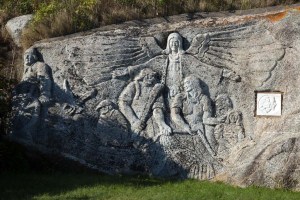 William E. deGarthe Gallery – located across the road from the Visitor Centre, this gallery is located in the original home of artist and sculpture William deGarthe. Born in Finland in 1907, he emigrated to Canada in 1926, originally settling in Montreal where he studied art. In 1945 he moved to Nova Scotia and continued his art education, eventually making his home in Peggys Cove. At 70 years old, he started carving a fisherman’s memorial on a 100′ wide piece of granite in his back garden. He worked on this for 6 years until he passed away in 1983.

Parts 1 and 2 of the deGarthe fisherman’s memorial 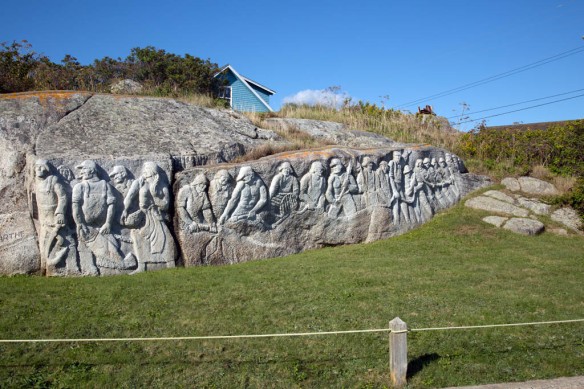 The monument above was hand carved out of granite over a 6 year period by an artist over 70 years old, simply amazing. A very moving experience, especially for somebody who spent 37 years at sea.

After the memorial monument Andy continued through the village, past the harbour and onwards towards the lighthouse, to meet Judi, who drove over from the Visitor Centre.

An overview of Peggys Cove and Harbour from approaching the lighthouse and restaurant. 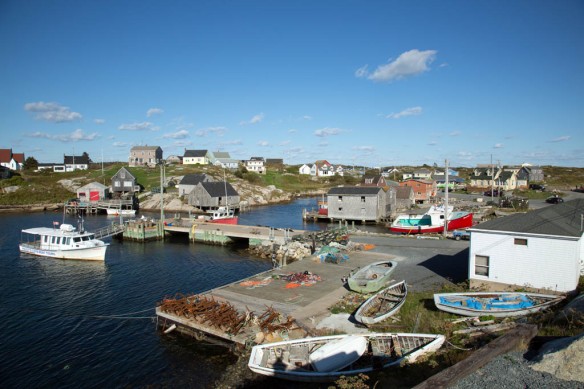 Peggys Cove from up by the restaurant

Fishing pier in the harbour with houses in the background.

Peggys Cove entrance to the harbour

The lighthouse is built on a rocky promontory that affords excellent views of the lighthouse, at most times of the day. Enjoy the next few photographs.

Peggys Cove lighthouse from rocks by the water

Peggys Cove Judi in front of the lighthouse 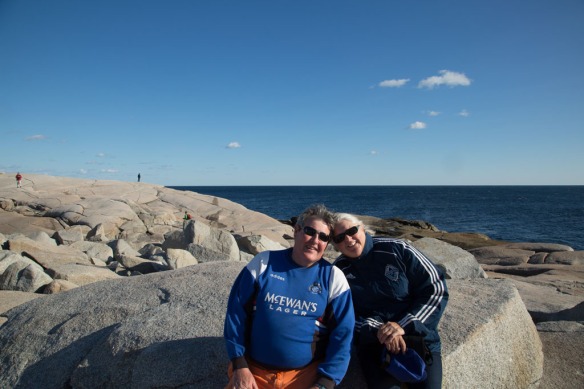 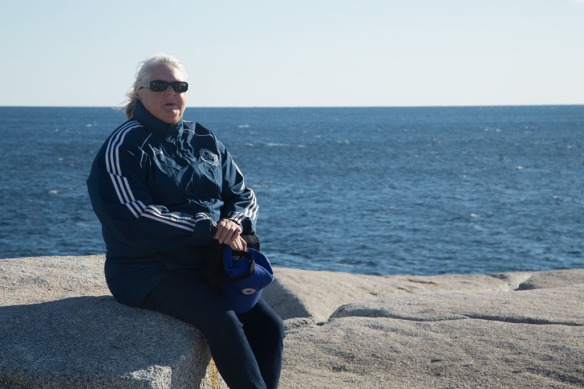 Peggys Cove with Judi sitting on the rocks below the light 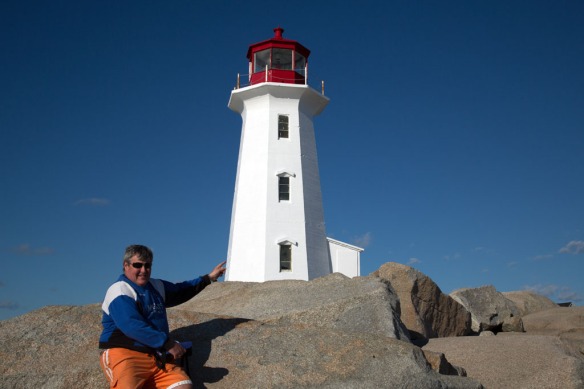