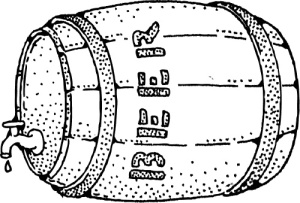 The topic for this post originated from a recent trip to my dad’s neighbour for an afternoon refreshment. For beer, the choice was Old Speckled Hen or a 80/- ale from Williams Brewery in Alloa. Now this really piqued my interest, as for a few hundred years, Alloa was the brewing capital of Scotland and our host’s grandfather owned the biggest brewery – Youngers. We can get Old Speckled Hen at home, which made the decision much easier, 80/- Ale please.

Located on the North shore of the upper reaches of the Firth of Forth, Alloa has a few hundred years of brewing history, with George Youngers Brewery commencing operations in 1762. Brewing declined in the mid 20th century and at present only one brewery remains.

The last remaining brewery in Alloa is not a multinational, it a small craft brewery, which are my favourite.

Starting out with a traditional Heather Ale that dates back thousands of years they have now expanded into more mainstream Scottish ales. The 80/- Ale is available both in bottles and real ale casks, and is an exceptional ale. Very smooth, mellow, but lots of flavour.

This is a brewery I would really like to visit for tastings, but unfortunately it’s a long walk from St Andrews. Judi doesn’t drive on the left and once I’ve had even a single beer I won’t drive.

Just sitting at the house enjoying a bottle of their Dark Island Ale, best described as simply amazing. Very smooth and a brilliant after taste. It is available in a cask and has twice won the Campaign for Real Ale awards for Champion Beer of Scotland.

If we ever get out to Orkney on a future trip to Scotland or a cruise, this will be my first stop.