The first excursion in our Southern Africa package was a 1/2 day tour of Cape Town, which is intended to provide a quick overview of some of the key attractions. Normally they commence with the trip up Table Mountain to permit taking photos prior to the harsh noon sun, but mother nature didn’t cooperate this morning, as the city and mountain was shrouded in fog. Plan B was to complete the downtown walk first, then proceed to Table Mountain and the other attractions. This post will cover the walking portion around downtown.

While eating breakfast the fog was continually burning off and returning, so we had no idea how long it would take to completely burn off. Departing the hotel it was still foggy, but 10 minutes later, on entering the downtown area, we started seeing the top of Table Mountain. Our guide Ryan checked, but they had huge queues at the cable car, waiting for the fog to clear, so we continued with our plan B, with the first stop at The Company’s Garden.

The Company’s Garden are located on Queen Victoria Street adjacent to the Parliament Buildings and St George’s Cathedral and were created by the Dutch East India Company in 1652. Cape Town is almost the mid-point of the traditional spice trade route from Europe to the East Indies, and was a vital replenishment port of call. The Dutch East India Company started the gardens to grow the fresh fruits and vegetables required for their ships plying the very profitable spice trade route. The original garden was much larger than the current 20 acres and has significantly changed from the original gardens, to more of a public park. 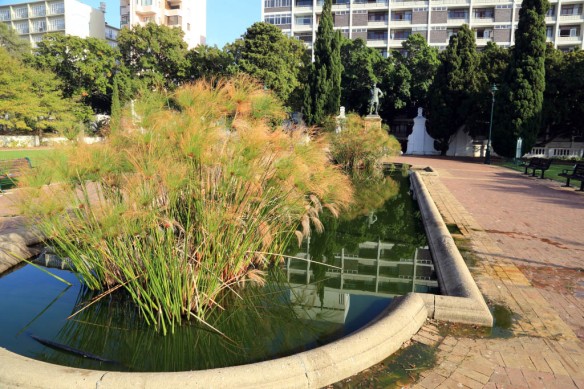 Pond at the entrance

Entering the gardens, behind the statue in the above photograph, this pond and another cover the almost complete width of the park with historical statues at each end and in the middle is the Delville Wood Memorial, which commemorates all South Africans that gave their lives in both World Wars. 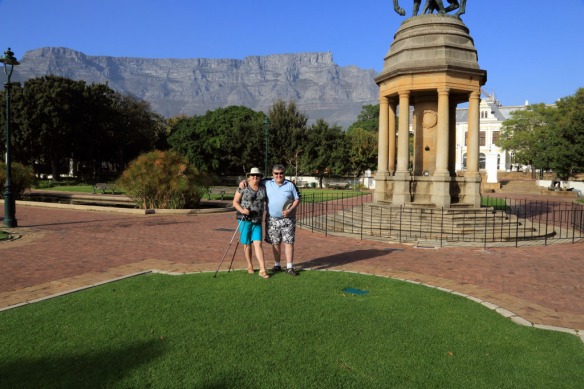 Andy & Judi in The Company’s garden

The above photograph has Table Mountain in the background and was taken adjacent to the Delville Memorial situated between the 2 ponds. We then headed down through the park to the VOC Garden (Vereenigde Oost-Indische Compagnie). This part of the gardens was created in 2014 and recreates elements of the original gardens, who’s purpose was producing provisions for the ships. 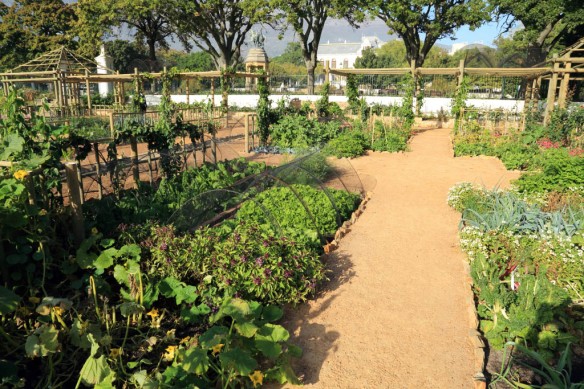 Another quadrant of vegetable garden

Continuing through the vegetable, herb and fruit garden I spotted a small tree lined path with yellow flowers in bloom. 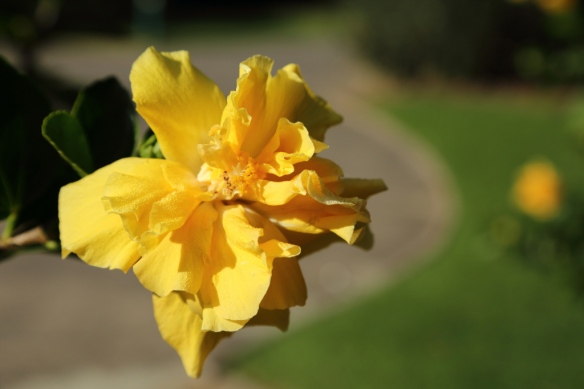 Yellow flowers that were in bloom

We unfortunately aren’t very proficient in identifying plants and flowers, so if you know what type of tree/flower it is, please post the answer in the comments.

Next we continued into an area containing a variety of trees, many of which were many hundreds of years old. Our guide explained that the gardens have employed many different nationalities and many of them brought trees from their own county, hence we saw everything from tropical Palm Trees to deciduous trees.

To provide a perspective into the size of the trunk I caught the workman raking the leaves in the photograph.

On departing the park we walked along Government Street past the government office building and public library to the corner of Wale and Adderly Streets at St George’s Cathedral.

The current church was built in 1901, is the oldest cathedral in South Africa and is known as the people’s cathedral due to the role played in fighting apartheid. It is the home church of the Archbishop of Cape Town, a position once held by Desmond Tutu.

We visited on a Sunday when services were taking place, so we only stuck our heads in quickly to see some of the windows from the inside. With the sunshine outside the stained glass windows were amazing on the inside. The church requests no photography inside, a direction that I studiously follow, and while some others may have taken and posted photos online, I regret I will not post links.

This is a tree lined pedestrian precinct with a variety of shops on both sides. Even on a bright sunny day the trees provided excellent shade. While it was quiet on the Sunday morning, our guide advised that this is normally a vibrant area with store owners retailing from outside the store and numerous cafes with tables and chairs on the pavement. 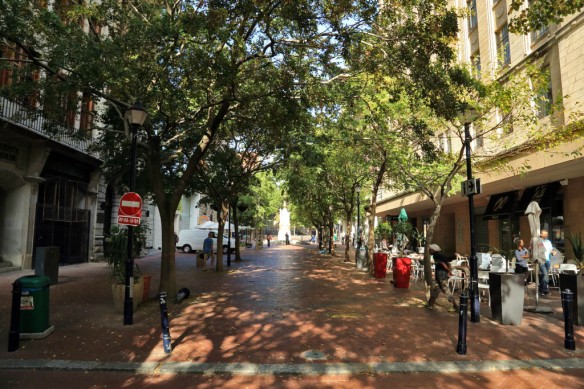 From St George’s Mall, we turned left onto Longmarket Street and continued for 1 block until we arrived at the Greenmarket Square.

Originally built in 1696 the square has performed numerous roles – city hall, slave market, vegetable market, parking lot and currently an informal flea market for African arts and crafts. The market is open daily and the vendors set up and dismantle their stalls every day. We walked around a number of the stalls and found most to be genuine local articles and the vendors very pleasant. Judi purchased a small elephant and got an opportunity to practice her bargaining skills. 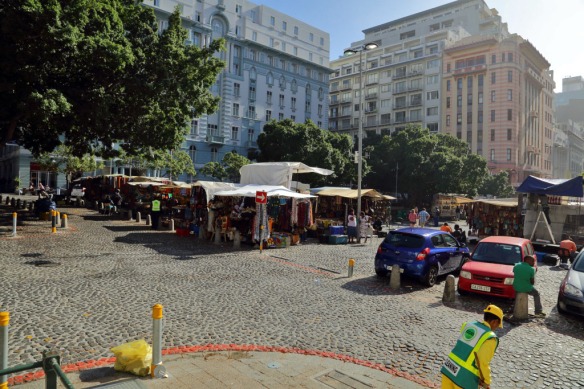 This completed our walking portion of the tour, so we headed back to the car to completed the remainder of the tour.

These are a couple of benches that we spotted outside the old High Court Building, which post-apartheid are a relic of the past.