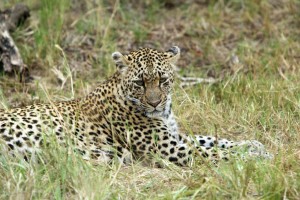 Shadow, the female Leopard in clearing with close up on face

Between breakfast and lunch I spent a few hours back at the cabin working on the photographs I had taken on the first two drives. Then, we have a short break after lunch before returning to the trough for afternoon tea. A quick cuppa is the perfect prelude to our afternoon safari. Cedric’s group has now grown to 6, with new arrivals Kim and Samantha, a couple of very nice young ladies, who are having a girls weekend break from husbands and kids.Having experienced both extremes of finding animals almost immediately, to driving an hour with no sighting, we were wondering what this afternoon’s safari would bring. Our first clue was Derek signalling left, immediately on departing the vicinity of the lodge. This wasn’t left onto another road, this was straight into the bush for the start of a really interesting ride. Crashing through the bush we headed into a small ravine where Cedric looked rather concerned about his ability to get us out again, fortunately he succeeded in reversing us out. Continuing our bush adventure, in the back, we got an extreme workout dodging the many low branches, with most trees having some serious spiky needles, others we hand passed back each row of seats, as Cedric drove ahead slowly. We all enjoyed the ride and eventually reached the prize, and it was certainly worth the effort, a big thank you to Cedric and Derek. 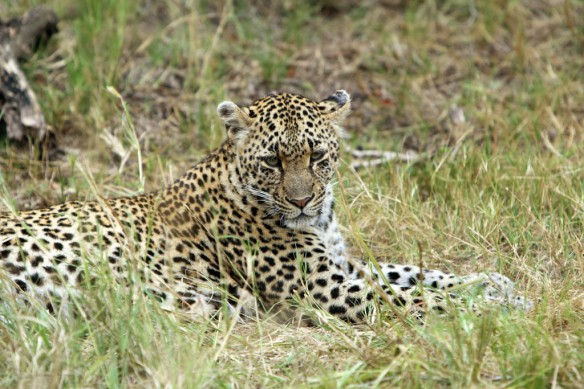 Shadow, the female Leopard in clearing with close up on face

This is “Shadow” a female Leopard who has a 9 month old male cub and they are currently living directly behind the Arathusa Luxury Lodges. Shadow has experienced some issues as a mother, as this is the only cub she has managed to raise to this age. All previous litters and a sibling to this cub did not survive. 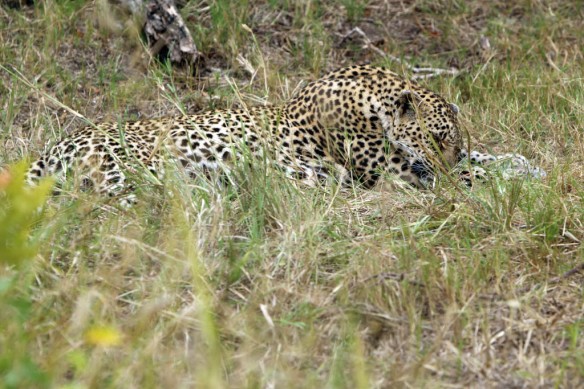 Shadow with head down shortly after our arrival

The above photograph show how comfortable she is with the trucks and people, which is an excellent testament to the Rangers and Trackers, who get us really close without the animals feeling threatened. 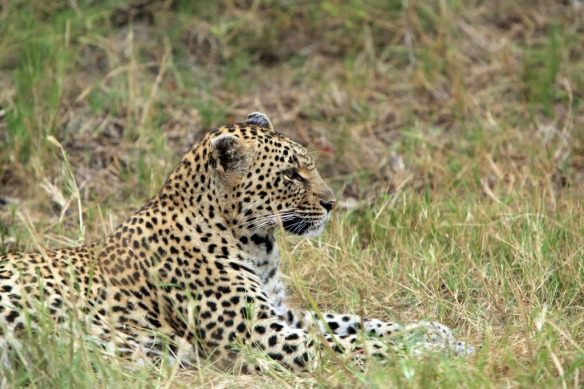 Shadow on alert again after hearing something in the bush

She heard something in the bush and quickly rose to an alert position. 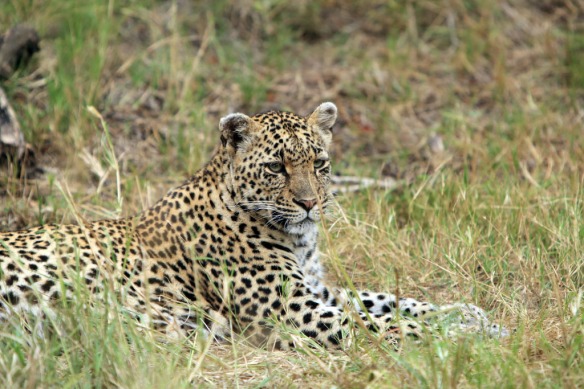 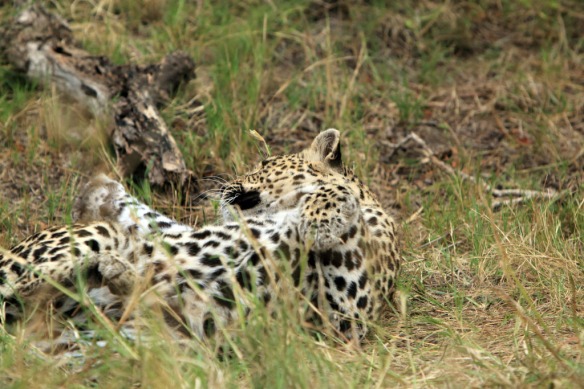 Shadow rolling on her back

The above photograph shows Shadow playing by rolling on her back, again a sign she is very comfortable with us in the vicinity. We were approximately equidistant to her and her cub, who was hidden at the base of a tree. 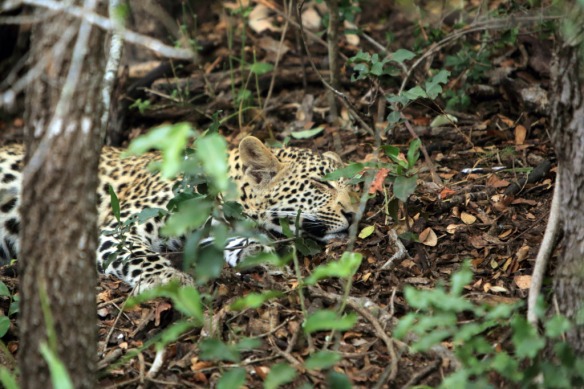 Shadow’s cub about 9 months of age

Before departing Cedric also discussed Shadow’s mother, who was an excellent mother and successfully reared 7 of 8 cubs to being adults. When going off hunting she would drop the cubs at the lodge on the loungers and return for them when she had the prey safely stored up a tree.

Suitably rested after our entrance, it was time for more exercise as we departed the Leopards and headed for the roads. Enroute to see what progress the lions had made with the Giraffe, we spotted the following animals. 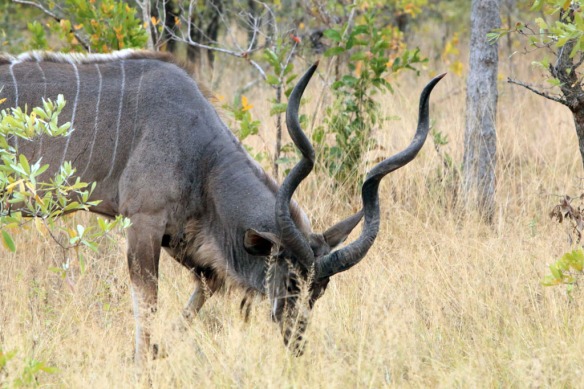 Kudu male grazing in a clearing 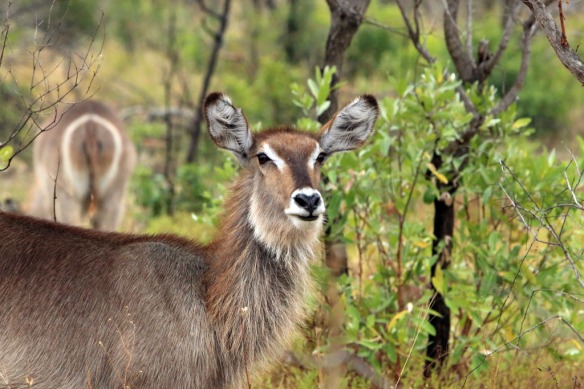 Waterbuck female with another in the background showing the distinctive target markings on their rear. 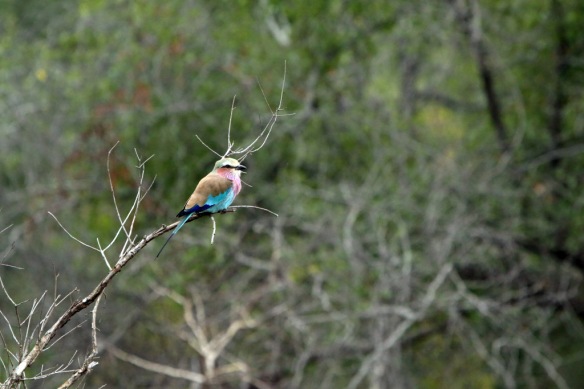 The Lilac Breasted Roller has amazing colours when its wings are spread in flight, unfortunately we only saw them flying at a distance and did not get any worthwhile photographs.

We found the Lions shortly after 17:00, but they had already departed the kill site. Unbelievable that 13 Lions could devour a 3,000lb Giraffe in less than 48 hours. On average each lion had about 230 lbs of meat, Wow! 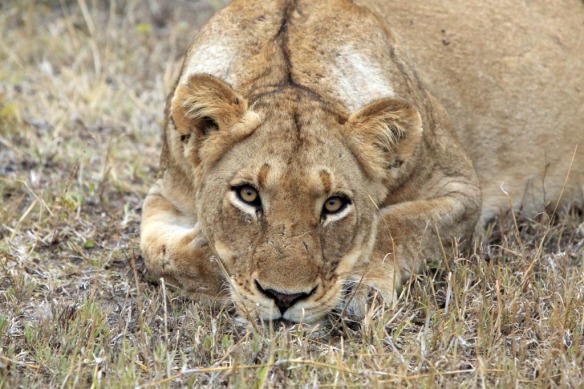 Lion female lying down and watching our truck

The lions were only a short distance from the kill site and were almost all lying down with highly bloated tummies. They were also creating a very pungent odour as they digested the giraffe. 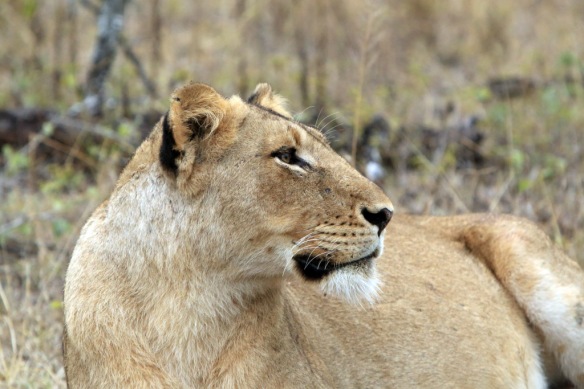 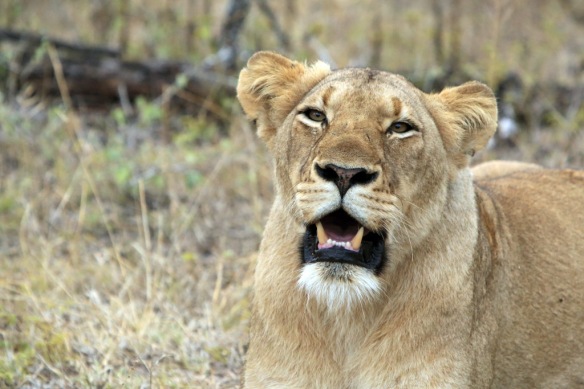 Lion growling with saliva in mouth watching us 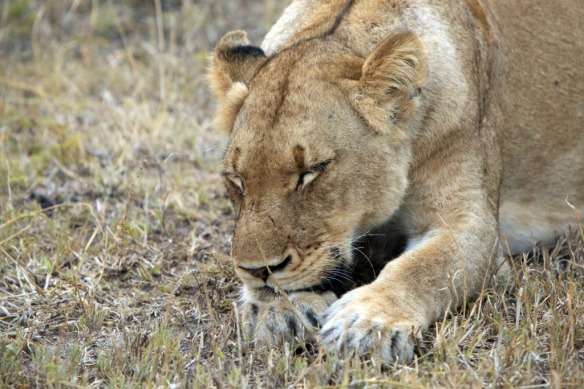 Young male of about 3 years starting to grow mane 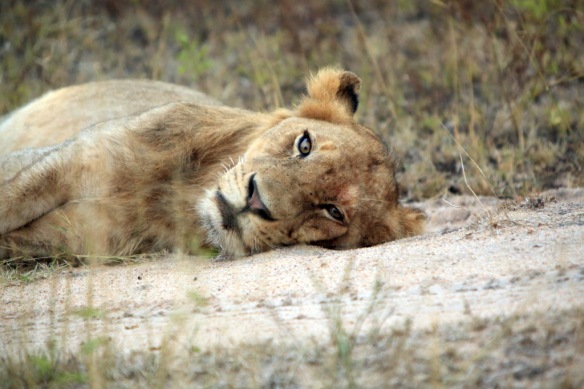 Young male relaxing after a tough day of gorging giraffe 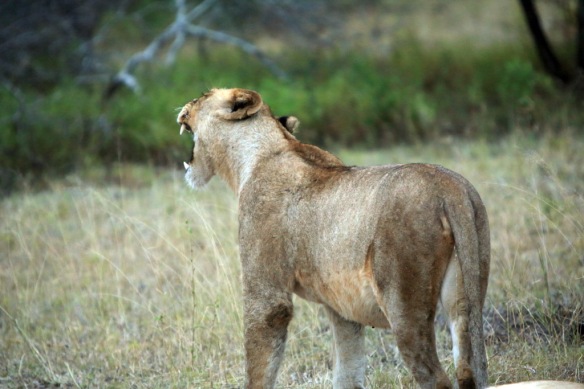 Female heard something so responds 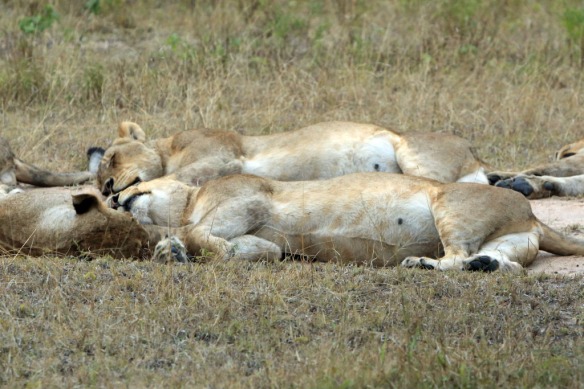 Check out those full tummies 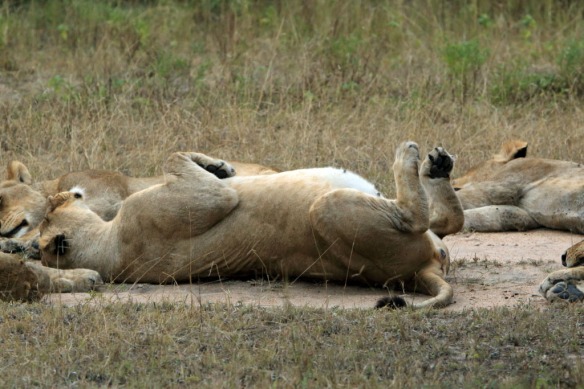 Female rolling on her back

Being assaulted by pungent flatulation convinced us a short visit to the lions was the order of the day. So after a short viewing, off we went in search of a clearing to stop for refreshments and snacks. Cedric and Derek again set up a table and prepared the drinks we ordered before departure. They also are provided with 3 different snacks. This is most enjoyable, standing around sipping a cocktail and chatting with the Ranger, Tracker and other guests. We could not have asked for a better group.

After refreshments we climbed back into the truck for the journey back to the Lodge. Darkness sets in quickly, which requires Derek to use a spotlight in addition to the headlights.

Back at the Lodge we are again welcomed back with a refreshing hot towel to wash off the grime. A quick trip back to the cabin to drop off cameras, etc. and get changed for dinner, then it was back to the lounge for pre-dinner libations and great conversations with fellow guests and Rangers.

This is the table set for dinner. 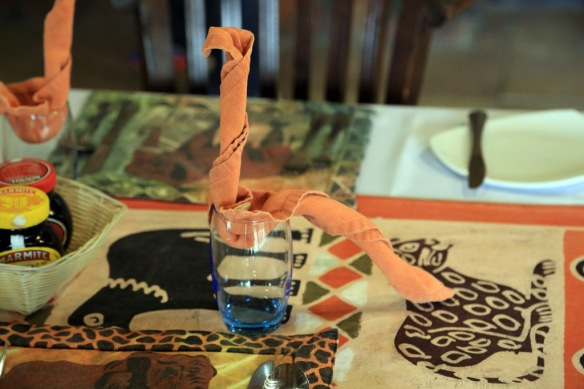 Napkin art on the table for dinner

This brings to an end our first full day at the exceptional Arathusa Lodge, so until very early tomorrow morning I will sign out.