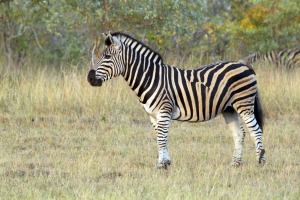 Heading to the Lounge area for the pre-safari afternoon tea, we spotted a couple of female Waterbuck grazing at the edge of the path, just outside our cabin. We stopped and thankfully they turned around, retreating into the bush. Continuing towards the lounge area, we had only taken a few steps when we spotted a large male Waterbuck walking along the path towards us. Oh! did I mention he had huge horns and he stopped in his tracks, watching us intently. Definitely time to practice discretion or valour, so we beat a hasty retreat to the cabin and phoned the desk. We were advised, if it was a Waterbuck it would walk away without bothering us, but if it was a Buffalo stay inside and they would send a Ranger. Fairly comfortable that it was Waterbuck, we again ventured outside, following the path to the lounge. We spotted him about 5 or 6 feet off the path and he watched us as we walked passed. Now that’s what I call getting up close and personal with wild life, but wait, read on for our even closer encounter with a big cat.This afternoon our numbers on Cedric’s vehicle increased to a full compliment of 10, but 1 couple hadn’t arrived, having only just passed through the main gate. Cedric advised we would head out in the vicinity of the Lodge and return in about 1/2 hr to pick up the new arrivals.

Judi sat in the front with Cedric and while chatting she mentioned we saw Shadow, the female Leopard and her cub traversing the rear of the water hole. Cedric came in a circle back to the water hole to pick up their tracks. Fortunately, Leopards tend to follow the roads while on the move, a fact observed later in the evening. As we drove slowly along the road, periodically Cedric would stop, open his door and stare intently at the ground. Apparently she has a few favourite locations, so Cedric was trying to narrow possible locations for future game drives.

While tracking Shadow we came across a herd of African Buffalo, with some of them happily lying in a pool of mud. 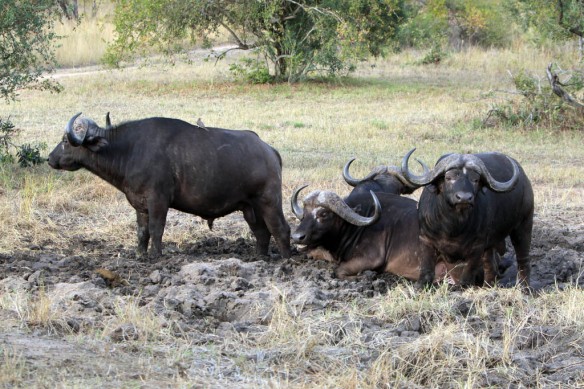 Buffalo in the mud

Just up the road from the Buffalo we spotted a small herd of Impala, which had a small baby.

Impala and baby grazing close to the Buffalo

At this point we started heading back to the Lodge to pick up the new arrivals, newly weds from New York. While crossing the air strip we spotted a herd of Wildebeest, one of which was limping badly. Not a good sign, when the law is survival of the fittest.

Wildebeest on the airstrip runway

In addition, at the far end we also spotted a Zebra herd, most were using the cover of the bush, but this one was out in the clearing. 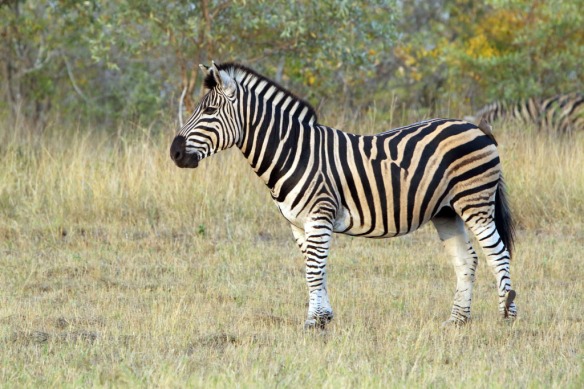 Zebra herd at the edge of the airstrip

With the new arrival aboard we set off for pastures further afield and we spotted a few Impala and Waterbuck, but I have sufficient photographs of them. That’s the sign of an exceptional safari, when you have taken enough photos.

Cedric had received reports of Leopard sounds, so we headed in that direction and once in the vicinity we stopped periodically for Cedric and Derek to listen. About 17:30 we stopped for the customary cocktails in the bush, which provided an opportunity for us regulars to welcome and chat with the new arrivals. As we had a Leopard in the vicinity, Cedric did request that we stay close to the vehicle while stopped.

Suitably refreshed, we climbed aboard and continued tracking the elusive Leopard, but sunset was rapidly approaching. Being our first clear, sunny day it was also our first opportunity to observe an African bush sunset. 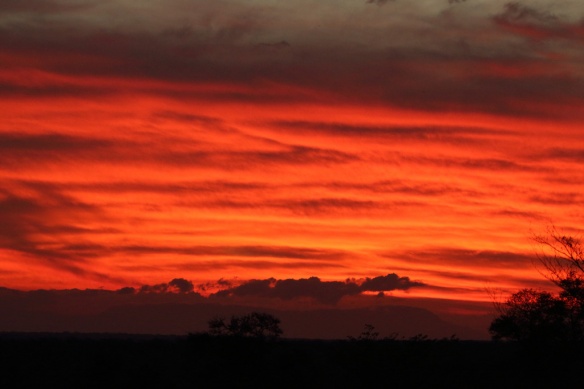 About 5 minutes after the sunset photos we spotted the Leopard. This is a male, they named “Quarantine” and it is the father of “Shadow’s” cub. 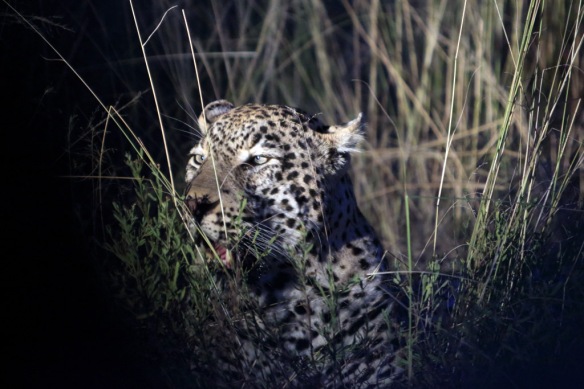 Unfortunately it is already pitch black and my camera doesn’t have a built in flash, not that it would have been much help at the distances involved. Needless to say, the following photos are taken at the highest ISO of 25,000 and are hand held with a fairly slow shutter. Never a great combination, but some actually turned out fairly reasonable.

Leopard male following him along road

He followed the road, periodically stopping to pee and/or rub his snout on branches. Cedric advised he is marking his territory, possibly while responding to one of the females within his territory that is coming into heat. 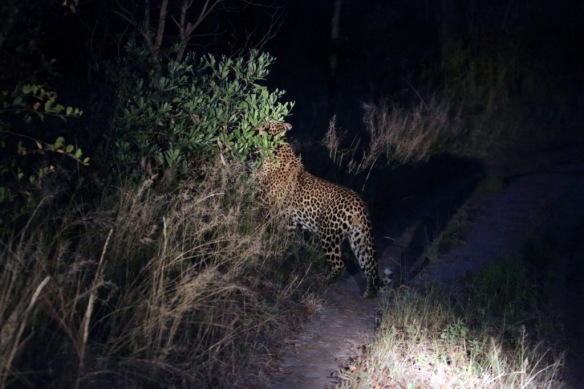 The above photograph shows him rubbing his snout on the trees, marking his territory.

Immediately prior to the next two photographs we cut through the bush, moved out ahead of him and parked at the edge of the road. He continued walking towards us and passed right down my side of the truck. Quarantine was so close I could have leaned over and patted him on the head, back, etc. as he walked passed. 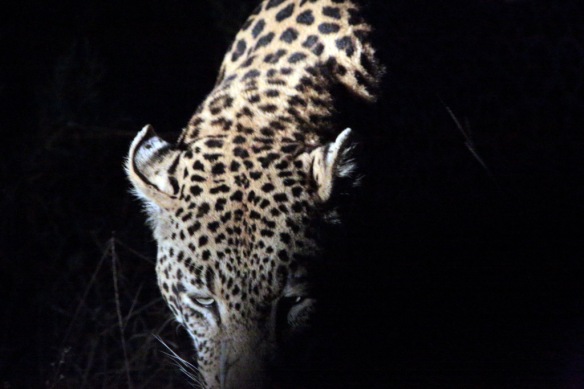 Leopard male stalking along side of truck

One final photograph of Quarantine, as he continued is journey into the bush, as it was long passed the time for us to return to the Lodge.

While returning to the Lodge we spotted three Honey Badgers on the road ahead, which immediately scampered into the bush. This is one of the endangered animals and Cedric mentioned they rarely see them. Wow, what a great day.