View From Our Room – Life Is Really Tough

After three days in Zambia, we were very happy to return to Cape Town and the exceptional Victoria & Alfred Hotel. Mind you, after three days at the Royal Livingston in Zambia, paying 5-star prices, but receiving budget motel standards, we would probably have been happy at a Motel 6.The distance between Livingstone and Cape Town is only a couple of thousand miles, but it took about 12 hours from hotel to hotel.Shortly after breakfast, I started developing symptoms of food poisoning, so with an impending 12 hour travel day, nurse Judi delved into our amply stocked medicine cabinet. Yet another reason to leave what is probably our worst ever hotel visit, and I have stayed in many around the world.

Picked up from the hotel by another excellent and informative driver we headed to the airport, which is so new it isn’t yet officially opened. If truth be known, they haven’t even finished building it, but it’s open and operational. Problem was paint fumes, the entire check-in area had heavy concentrations of off-gassing VOC’s from the paint. Once through security we proceeded to the departure gate, to find a nice lounge, but it was closed off. Apparently they only have 1 departure gate and it opens immediately prior to each flight. Prior to the gate opening, you stand in the alleyways waiting, needless to say a number were voicing displeasure. 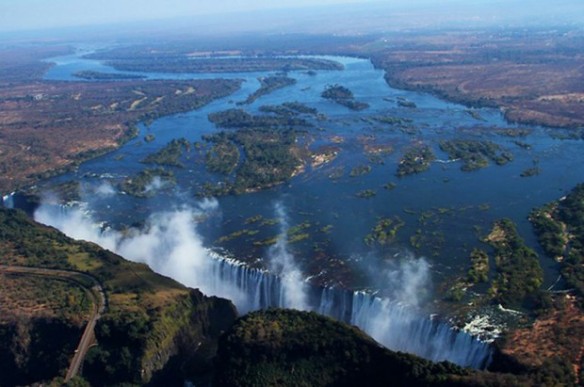 Zambia – most of the people we met were brilliant, very welcoming, friendly and informative, but the facilities and management are shocking. We enjoyed seeing the Falls, but having seen it once we see no need to suffer Zambia again.

On a positive note, we’re heading back to South Africa and more specifically Cape Town. Even as we stepped out for the walk to the aircraft we noted a positive, it was a A-319; yes, the overhead lockers will accept the hand baggage. However, before take-off the crew walked up the aisle, twice, with two aerosol sprays to fumigate the aircraft and passengers.

After a couple of hours we arrived in Johannesburg, in the middle of a thunderstorm. Wow, quite a landing. Judi was happy when the controlled crash, or landing was over, and we stopped at the arrival stand. Our Cape Town flight was delayed and no announcements were made regarding reason, but an employee walked up the queue advising they were waiting for the pilot, who was delayed due to weather. After a 4-hour layover, we finally commenced the final 2 hr flight to Cape Town, where we were picked up and driven to the hotel.

At the V&A we were welcomed back, with the manager delivering the package we left in their safe almost immediately and a promise that they would deliver the 2 suitcases we left in the morning. Quick room service of tea and toast, and off to bed.

During our 2 full days in Cape Town we had planned to get a 2-day pass on the Ho-Ho bus, but with me with the remnants of food poisoning and Judi with a bad cold, we decided 2 quiet days were in order. Therefore, we took short walks around the waterfront and enjoyed the harbour and Table Mountain scenery.