Skip to primary content
Wow, how time flies, it’s hard to believe we have already been on Koh Samui for just over a week, most of which we spent lounging around the pool. Koh Samui is a small island located in the Gulf of Thailand and is located a few miles off the SW Thailand peninsula.

The villa manager arranged for a taxi to pick us up at the airport, which is fortunate, as few drivers speak English and even less know the location of our villa complex. Apparently they favour landmarks on Koh Samui, rather than a street or mailing address.

Our next wake up call was the circuitous route to the villa from the main road. It was 3/4 mile along a dirt track of multiple twists and turns. When I checked on Google Earth it had showed a road straight up from the main road. Well, apparently somebody built a house over the road, so it was closed. Huh! only in Thailand.

Complex pool and three of the six villas

The complex is exactly as outlined on the Airbnb website, consisting of six, three bedroom villas and a gazebo/rec area built around a central pool. Each villa is owned by an individual owner, most of whom are ex-pats and they hire a manager to manage the rentals. All villas are identical, with some individual differences to the furniture inside. All are very comfortable and the gardens are extremely well maintained by the gardener, who is present 6 days per week.

During our first week we have spent many hours both in the pool and lounging around the outside.

On the NE corner of the island we have 3 supermarkets, so the first day, our kids led the way, so we could get the pantry stocked. We decided to get milk and meats last, and everything was going well, at least initially. The initial shock was at the alcohol section, which was closed. Apparently you can’t purchase alcohol between the hours of 14:00 and 17:00 (M to Sa) or before 17:00 on Sunday.

The next shock was arriving at the meat area. OMG, the meat is displayed in large un-refrigerated trays that have no plastic screens. Each tray had a different meat and customers are fighting the abundant supply of flies, then picking up the meat, inspecting it, probably coughing all over it and then putting it down again. Tongs, ha ha!! who needs them, everyone has fingers.

Needless to say we by-passed the meat and headed to the fish. Finding the fish was easy, you headed towards the strong fishy smell. Yet again, no refrigeration, but at least they did use ice. The strong fishy smell and that entire fish lying there, with eyes and all, convinced us that we also didn’t need fish.

So we are becoming vegetarians for most of the next 2 weeks.

The island consists of mountains in the middle and a flat plain around the outside. We drove the ring road, about 45 miles around and it really is fully developed along both sides of the road around the entire island. Caught a couple of glimpses of beach, but it looks to be very coarse sand, not the fine sand we are used to. About the bottom of the island we decided that a lunch stop was in order, only problem, for the next 20 miles we didn’t see anywhere that we would even consider stopping in, never mind eating. A number of the kids have frequented the local establishments, but most have experienced varying degrees of food poisoning.

Our primary purpose of visiting Koh Samui is to attend our son’s wedding. The previous evening Iain & Heidi (son & daughter-in-law) hosted a BBQ at our villas. We have a BBQ, but it is charcoal, what no gas? Wow. One of the chaps toured the island looking for charcoal, returning with a selection of wood chips. Next problem, how to light them – any Boy Scouts around? Finally we got it going and with coals smoking, started cooking. 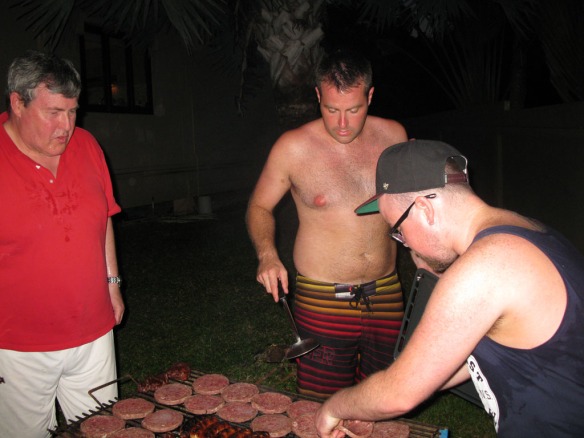 Andy, Iain and one of his friends tending the BBQ

A splendid evening was had by all and it was the perfect precursor to tomorrow’s wedding.

For the 2nd week we promise to be slightly more adventurous, reducing the pool time and playing tourist.