Our current nine month grand adventure started with two primary drivers, namely our son’s destination wedding in Thailand and the World Cruise from Sydney, aboard Sea Princess. These two events then metamorphosed into a round the world airfare and a few additional countries. Already having flown more than half way around the world, we have finally arrived for the primary reason for starting this adventure. You may ask, why select Thailand for your destination wedding?

Having both worked on cruise ships, they visited Thailand many times and in addition, shortly after moving to Dubai they headed to Koh Samui for a holiday. During the holiday they researched many options and were very impressed by Faraway Wedding Villa, where Richard the General Manager gave them an excellent tour of their own facility and a number of other venues they use on the island. Owned and operated by ex-pats it is a superbly run organisation that customise the wedding to your exact requirements.

Prior to the wedding, all guests were picked up from the various condos and hotels, and dropped off at the the villa, which is located on the west coast. What a perfect location for a sunset beach wedding, which is exactly what Heidi and Iain envisaged. Depending on the number of guests and the weather, as an alternative, you can have the ceremony in the gazebo, or inside protected from the weather. Arriving at the villa we noted the beach set up for the ceremony, but they had the inside ready as well, in the event the weather turned inclement. 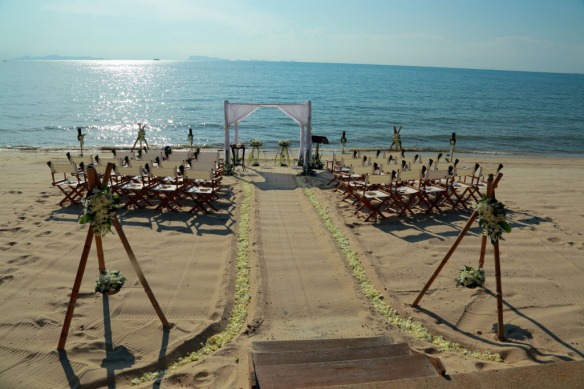 Beach set-up in preparation for the ceremony

Everyone arrived in plenty time and had an opportunity to meet and mingle by the bar, prior to taking seats on the beach for the ceremony. One of the young kids was sleeping in the groom’s room, so Iain and his groomsmen joined the meet and mingle.

Iain with Best-Man Ryan. You lost the ring???

Iain, all smiles, just prior to heading down to the altar.

Iain close-up on the patio

Judi and Grampa on the patio by the bar

The ceremony kicked off with Iain and the groomsmen being escorted into the facility by Thai dancers and a accompanying band. 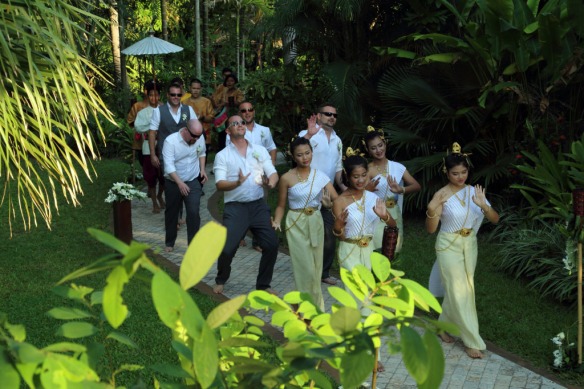 Iain received the seat at the front, with bride’s mum Erika and Judi seated behind, while the dancers performed a Thai dance.

Thai dancers at the entrance to the beach after their performance. 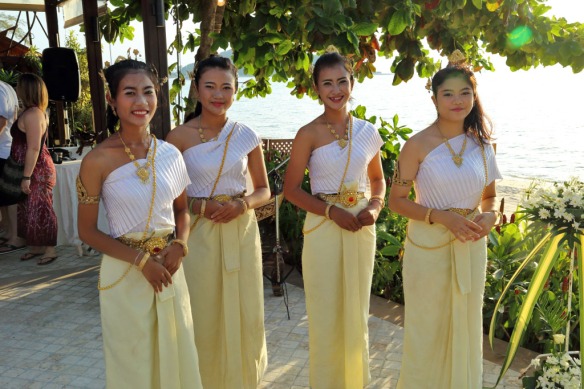 Thai dancers after their performance

Finally the sun is approaching the horizon, so it is time for guests, the groom and his party to head to the beach. 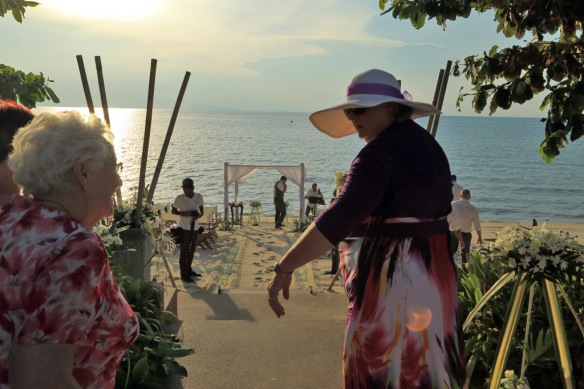 Judi and Heidi’s Nan heading down the stairs

On the beach we quickly discovered a downside to a tropical beach wedding – excessive heat. Even the people from Dubai were complaining about the heat, go figure. The beach temperature was recorded at a toasty 48 C.

Iain managed to stay reasonably cool with a number of chilled towels, however the rest of us simply melted.

Iain and groomsmen waiting at the altar, is Heidi coming

After what probably seemed like an eternity in the heat, the bridesmaids made an appearance and took up station opposite the groomsmen. Heidi, the beautiful bride is on the way to the altar.

Heidi and Les walking down the aisle

The ceremony was very simple, but extremely well done.

Once the “I do’s” and installing rings was complete, they performed a ceremonial joining of grains of sand, with each of them pouring sand from a shell, into a glass.

Heidi at the alter after the ceremony, prior to being whisked away by the photographers for the sunset wedding photos.

Heidi after the ceremony

I also took a few sunset photos with the guests.

Erika and Judi with sun setting in background 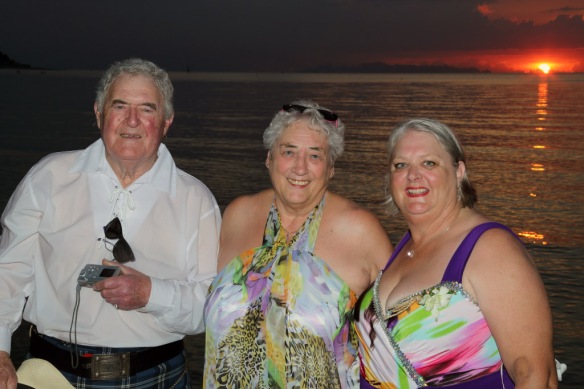 Grampa, Francis and Judi with sun setting in background

Trevor, Erika and Chris with sun setting in background

While we were attending the beach ceremony the staff had quietly prepared the tables on the patio. Seating arrangements for the meal were traditional UK, with the head table consisting of Bride, Groom, Maid of Honour, Best Man and both parents. The family was assigned a table, the bridal party another table and the various friends at the remaining tables.

Obviously created by the villa, very simple, but a very nice touch. The sand and shells at the bottom tied in completely with the beach wedding. The organisation was spectacular and no tiny detail was missed. Each guest had an individual name tag and on the rear, facing the guest, was a list of any allergies you provided in advance. As each course was served the waiter advised the contents and confirmed it did not contain any of your listed allergies. 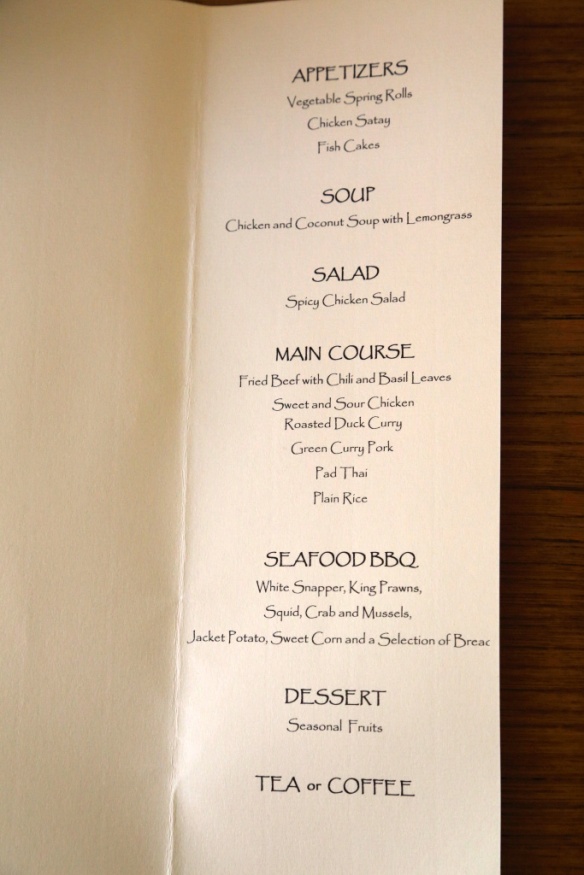 The meal was traditional Thai food and was prepared to perfection from the freshest of ingredients. The appetisers were served on a plate with 3 liquor type glasses, with each glass having a sauce on the bottom and the appy sitting in the glass. The appys were fish cake, beef satay and spring roll.

Next up was a fabulous chicken and coconut soup served in a bowl made from palm fronds. While delicious, it was also refreshing. Next up was the salad, again served in a palm frond bowl. The menu said spicy chicken salad, but mine was rather tame.

For main course we each received a plate of boiled rice stored within a tall cone made from palm fronds. The other dishes were served in large bowls, with the top table receiving two of each dish. In addition, Judi received individual dishes, easy on the spice. Each dish was excellent and suitably spicy, especially the fried beef and chillies. The portions were huge, as over 50% of the dishes were returned uneaten.

Fruit plates were served, but the schedule was slipping, so we had to continue with the activities, as everyone enjoyed the fresh fruit, then returned to the beach. 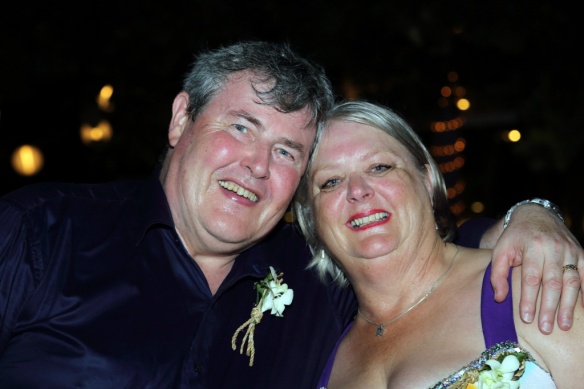 Andy and Judi on the beach awaiting post dinner activities

Next is me and Iain’s best man Ryan, a young man I have known and coached at soccer for many years. 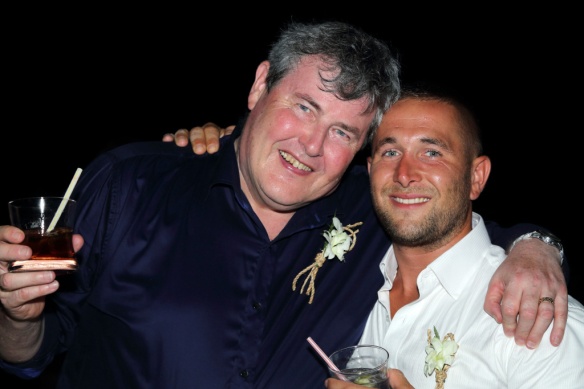 Andy and best man Ryan on the beach after dinner

Beach activities started off with lighting and releasing ceremonial Chinese lanterns, with Heidi and Iain having the first honour.

Heidi and Iain releasing the first lantern into the sky

Heidi having just released a lantern

Heidi thoroughly enjoyed this activity, as she assisted with many others. Next up was another photo op in front of a wall of light on the beach.

Iain and Heidi on beach by curtain of light

This was followed by the red heart.

Red heart fired up on the beach

The final beach activity was the fire dancers, who were amazing, especially the finale. 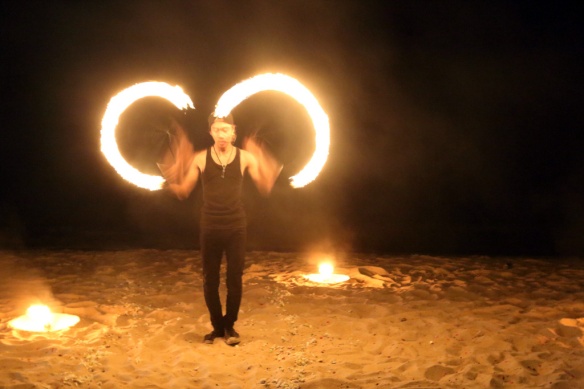 My tripod was being used elsewhere, so this was shot hand held with a very slow shutter to get the circles of light.

On completion of the beach activities it was time to head back up to the patio, which had quietly been cleaned up. Prior to the garter removal and bouquet tossing they raised the “Just Married” flag. 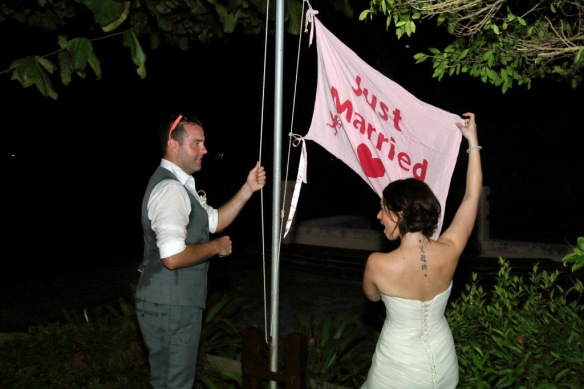 Then it was time for Heidi and Iain to plant the love tree. Iain got carried away and soaked one of the bridesmaids while watering the tree. 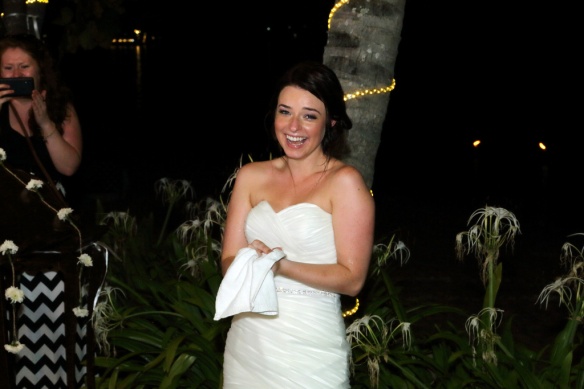 Heidi after planting the love tree

With only 90 minutes before midnight, it was time for the formal dances and the DJ to kick the music up a couple of notches. 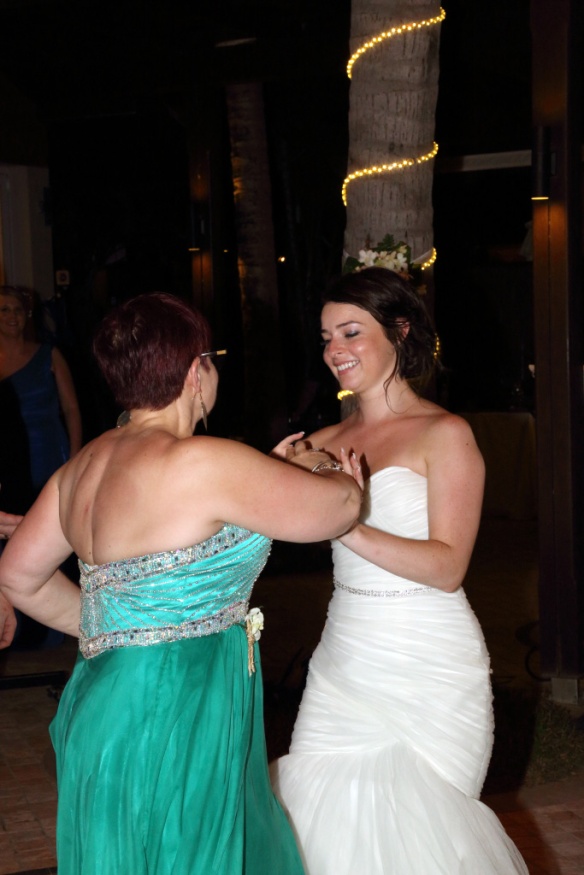