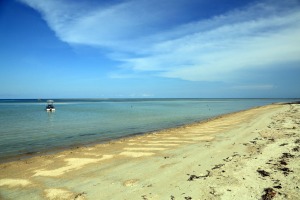 Koh Samui, a small island located just off the Thailand coast, many years ago it must have been the ultimate tropical paradise. With a small mountain in the middle surrounded by a flat plain around almost the entire coastline, and an abundance of beaches and palm trees, this island had loads of potential.

Unfortunately, in our opinion, development has resulted in an overly developed and expensive island that specialises in tacky tourism. This fact was confirmed during our recent full day tour of most of the island attractions.

On arrival at the tours shop, the day started extremely well, as the lady was very pleasant and after our group (10 adults + 1 child) signed in, she walked us to a local café. The bus would be about 45 minutes, so time for tea or even breakfast. It was a great little café, very clean with excellent staff and reasonable prices. 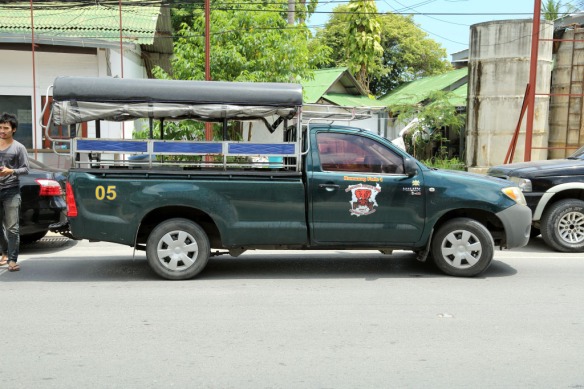 The first shock of the day was the arrival of our luxury air-conditioned bus that would whisk us around to each attraction. Note the open sides and front, which provided wind chill while moving, probably lowering the temperature to the low 40’s (104F).We all piled in, 2 in front with the driver and 9 in the back. The novelty lasted about 10 minutes, at which time it was replaced with exhaust fumes, especially at the rear where I sat.

After about an hour’s drive we arrived at the first attraction, the elephant trek. Judi was more than slightly apprehensive about climbing up onto the elephant and we were both concerned with how the elephants were treated, having recently seen them wild. Regarding the first issue, no problem, as you walk out on a platform and when the elephant arrives you simply sit in the seat. Really easy and a great start to the trek. 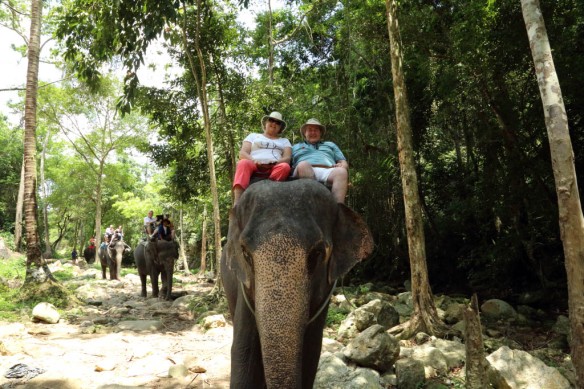 Andy and Judi at the head of the pack

Our handler was very good and while the young male wanted frequent stops to eat, the handler let him relax and then coaxed him to continue, with light pushes behind his ear. 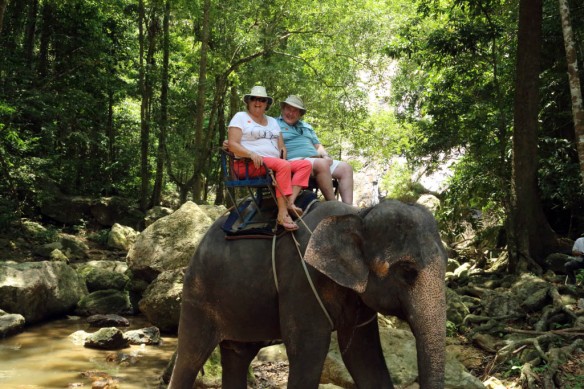 Andy and Judi sitting atop the elephant

Approaching the stream, the handler jumped off with my camera and guided the elephant with voice commands. Obviously has lots of experience with cameras, as he took some good shots and even manipulated some of the controls. Just less than a 1/2 hr on the elephant, we really enjoyed the elephant trek.

Judi went to feed the elephants in the coral and noted they are chained, with only about one foot of slack. This results in them moving in un-natural arc. While Judi was feeding the elephants I walked up the hill to see the waterfall. After seeing Victoria Falls, it was rather under whelming. 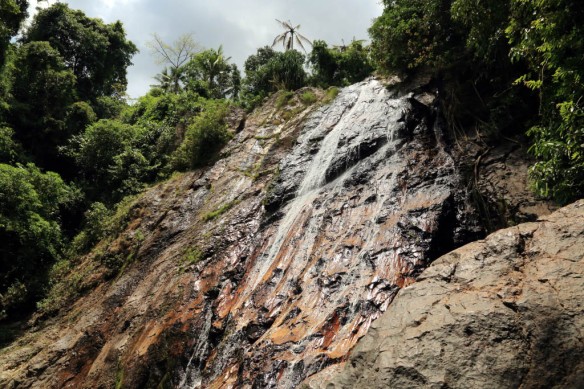 Waterfall above the elephant trek

Prior to departing the elephant trek, we discovered we now have a tour guide and 2 vehicles, which provided a little more space, but no more comfort. 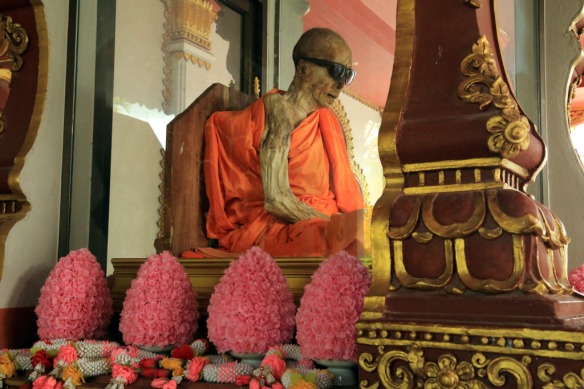 The next stop was the Mummified Monk, which was a short 10 minute drive. Culturally this was an excellent stop and is worthy of a separate post.

Next stop was the Aquarium and Tiger Show, which frankly epitomised the worst of tourism on the Island. The Aquarium consisted of a series of tiny tanks with far too many fish. Zero education at this aquarium. In one of the tanks I saw a fish where the water depth was slightly more than double the height of the fish. After passing through the aquarium we saw the tigers pen, which was a disgrace. Nothing but concrete and a putrid water bath. Surely they could provide some vegetation, if only for shade, and clean water.

The final activity at this stop was the bird and tiger show. It commenced with the bird show, which was narrated by a lady, who spoke almost continuously. Only problem is we couldn’t even determine which language she spoke. Couldn’t make out a single word. They had a few birds fly around. 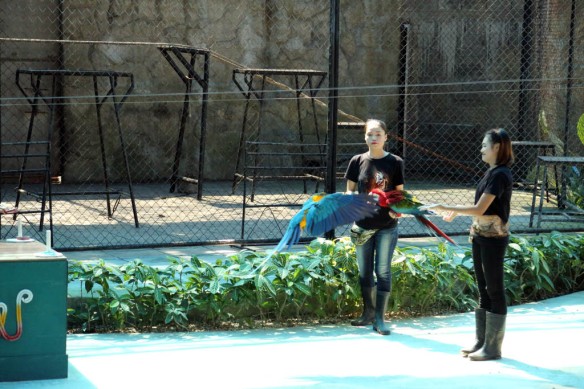 The next act was a bird they tried to have you believe could actually count. 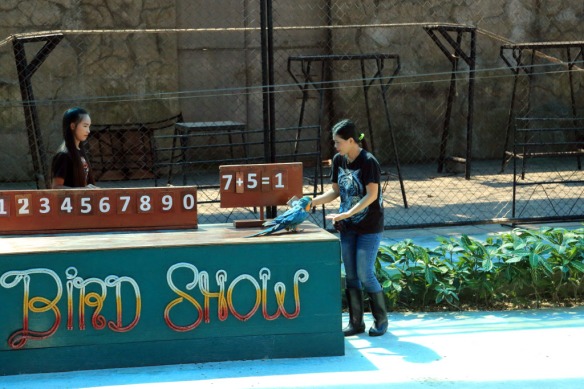 They finished with a couple of the original birds flying on and off volunteers arms. Other than the announcer, this was the least offensive part of the aquarium/tiger show. Next up was the Tiger Show, where they had a number of tigers completing various tricks. 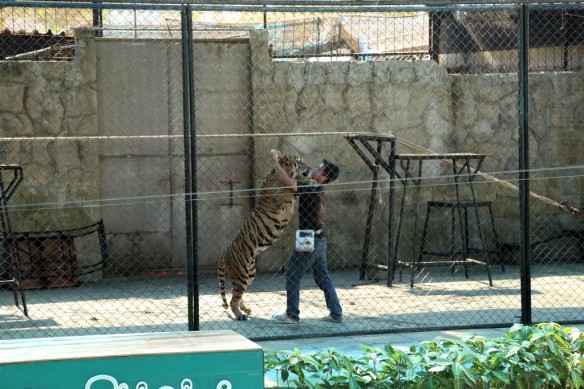 Their finale was most offensive having a tiger jump through 2 flaming hoops. Putting the tigers away they brought out a single Leopard, which repeated most of the tricks done by the Tigers. 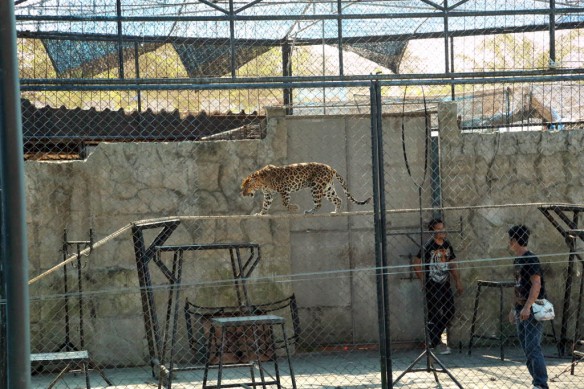 Thoroughly disgusted with how the animals were treated we hopped back aboard our luxurious transport and off to the next tacky tourist adventure. After a short drive we arrived amidst a few coconut palm trees and location of the Monkey Show.

A really low budget affair, this show comprised one chap and two tethered monkeys. One of the monkeys spent the entire time trying to release the extremely tight rope around its neck. The 2nd monkey, with similar tether and long rope, ran up the palm tree and threw down a couple of coconuts. On return to ground level he was tied to the tree on a short leash. Unless you wanted to pay extra for photos, the show was over.

It was now about 15:30 and after a short drive we pulled into Jubilee Restaurant for lunch. Located between the main highway and beach, both the food and view were great. 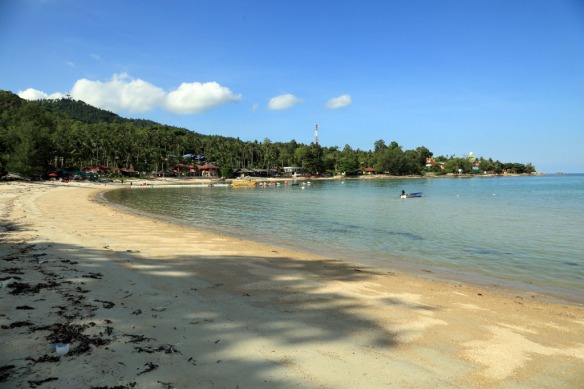 View to the left from the restaurant 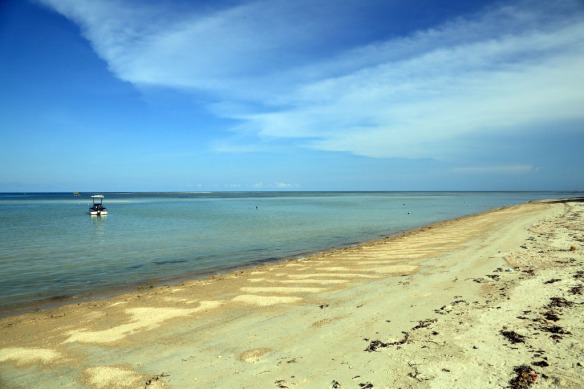 View to the right from the restaurant

While the food and views were excellent, the price of drinks was highway robbery. A can of local beer was almost double the price of the café we visited before the tour. They obviously have prices for locals and different for tourists.

Our last scheduled stop was Grandfather & Grandmother Rocks, which if you have a vivid imagination supposedly resemble genitalia. 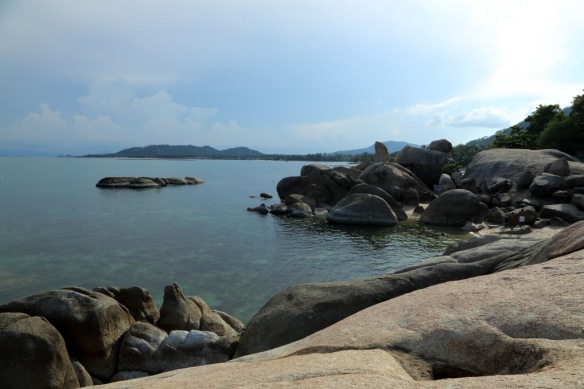 We spent most of the time at this stop at Leonardo’s Ice Cream shop chatting with a pleasant chap from Italy, who started the business. Brilliant ice cream, but you certainly pay for quality, at Can $4.00 for 2 small scoops.

This should have been the end of the tour, but for a tip, the guide offered to stop by the Big Buddha. Really all they did was take a less direct route back to the drop off point. As soon as we arrived, I knew it was a waste of time. The sun was setting directly behind and you definitely couldn’t get any photographs.

I can confidently report this is the worst tour guide we have ever experienced. While travelling, he sat up front in the air conditioned cab smoking away, while we melted in the rear. He provided little, if any, information on the island and the lifestyle.