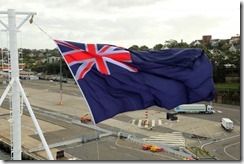 Finally, the wait is over and after 15 months of counting down the days, which changed to hours last night, we finally boarded the Sea Princess, our home for circumnavigating the globe during the next 104 nights, or 3 ½ months.

After the enjoyable pre-cruise dinner last evening, it was a long night for both of us, as we were like kids at Christmas, eagerly awaiting the pinnacle of this grand adventure. Suffice to say, neither of us got much sleep last night. For Judi, this is a new experience, as her previous longest cruises were 36 days on Diamond Princess and 35 days on Emerald Princess, so 104 days is a shade longer. However, for me this is a walk in the park, as back in my deep sea days I regularly completed 4 month voyages and even one of 9 months, but those days were just so many years ago.

Read on to find out how our first day went.

Judi with World Cruise Intro on The Big Screen 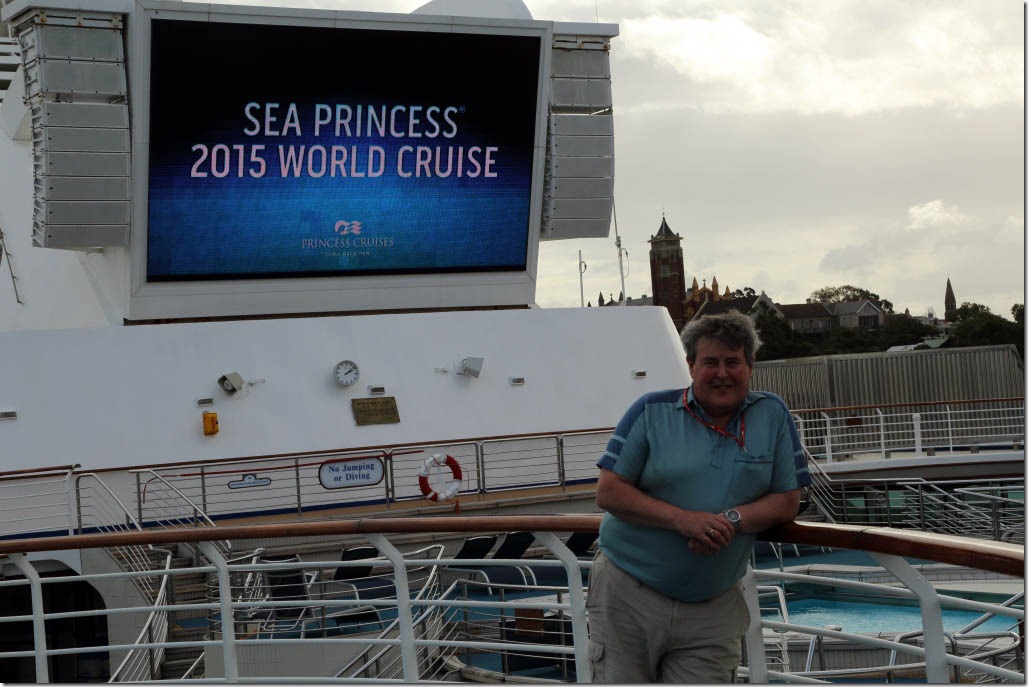 Andy with World Cruise Intro on The Big Screen

Sea Princess departed White Bay Cruise Terminal a couple of hours late about 18:00 on a dark, overcast, wet and windy evening. At a speed of about 3 knots she navigated out of White Bay and Pyrmont Docks, eventually swinging to starboard for the approach to Sydney Harbour Bridge. On clearing the bridge, Sea Princess passed between Sydney Opera House and Fort Denison, then set various courses towards Sydney Heads. On clearing Sydney Heads, Sea Princess altered to a generally Southerly course towards the next port of call, Melbourne. 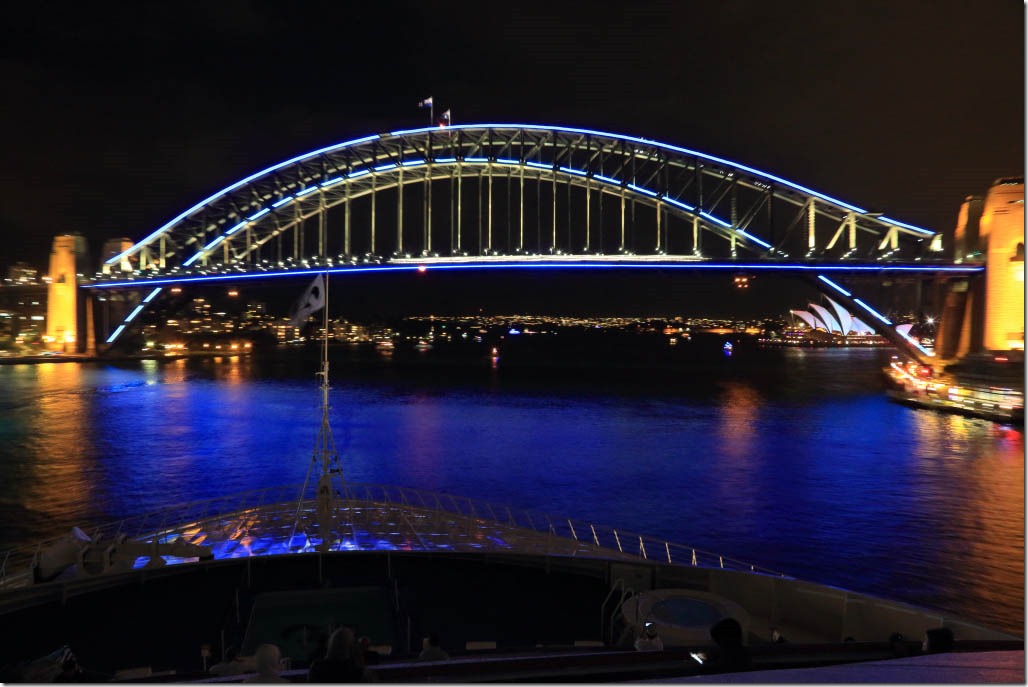 I note a slight amendment to the information provided in the Princess Patter, where the Navigator expected to sail NE’ly courses towards Melbourne. Wish I was still working on the ships, as in my day that would cost the Navigator a case of beer.

On boarding the vessel we headed to cabin C424, a balcony cabin on the port side of Deck 9, which is our home for the next 3 1/2 months. This is our first time of this class for over 10 years and OMG, we had forgotten how compact the cabins and balconies are. A couple of suitcases arrived, so we took the chance to finally get unpacked for the first time in 2 months.

Our Compact Home For The Next 104 Days

Judi sitting on the rather narrow balcony

We rarely eat in the buffet, so we headed down to Deck 6 to the restaurant for lunch, only to find it closed 5 minutes ago. No latitude is given, so we headed to the buffet. Judi in the lift and me by the stairs. Tough climb for the first day, but I still beat Judi and even had time to get the heart rate below 100 before she arrived. Buffet fare was standard for embarkation, so we grabbed a small plate and shared a table with another couple. They were only completing a 2-day coastal to Melbourne.

After lunch we headed for a walk around the ship to re-familiarise ourselves with this class of vessel. In the spa, Judi was offered a complimentary massage, so we got chatting with the young ladies. The young ladies were all British and when asked where we were from I responded, Vancouver. This confused them greatly, eventually asking how I come from Vancouver, but have a Scottish accent. Further discussions proved how small of a world we live in, as one of the staff comes from the same town as our daughter-in-law Heidi. While a few years younger, she knew Heidi from dancing, as Heidi was one of her teachers. She was all excited when I mentioned they live in Dubai and will be coming to pick us up from the ship. 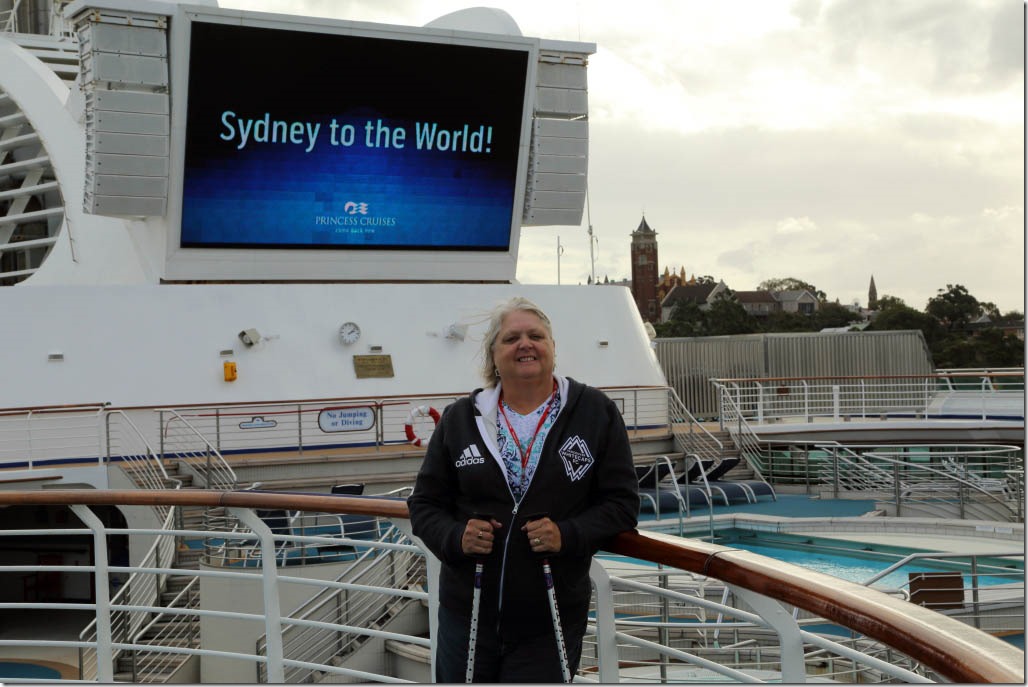 Judi With One Of The World Cruise Intro Messages 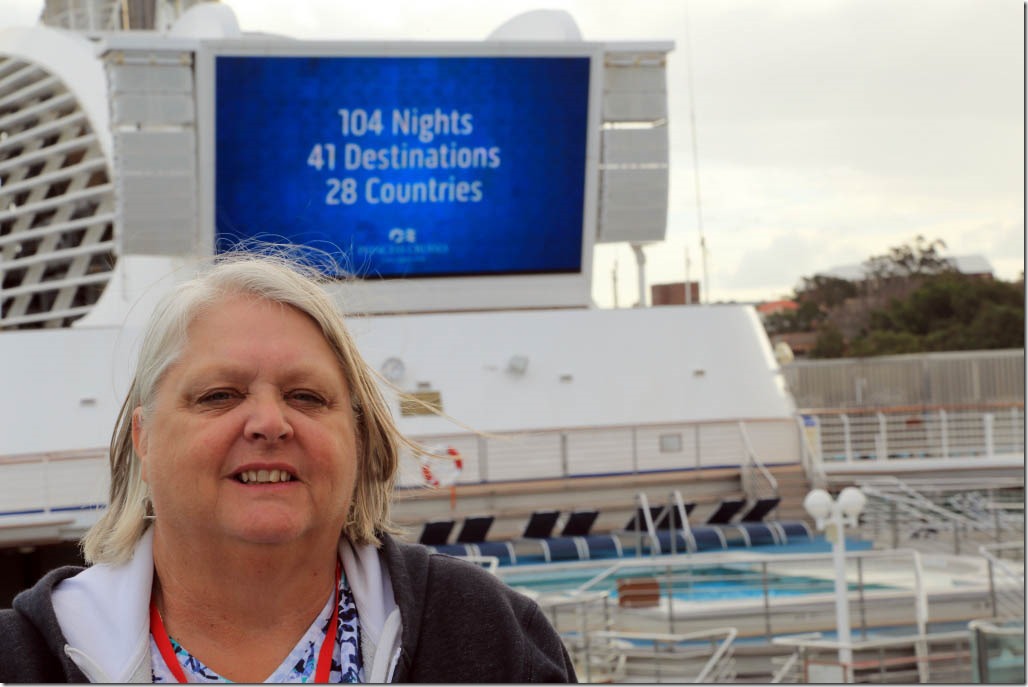 Judi With Movies Under The Stars Screen In Background

Judi At the Stern Pool

At 16:15 we postponed our tour of the ship, attending the Pax Sports, or passenger muster drill. We had a number of other pax having difficulty with the lifejackets, so both Judi & I assisted with some teaching. After the drill, it was back to the cabin to unpack the remaining suitcases. Yes, for the next 104 days we don’t have to fly, pack or live out a suitcase. On completion we headed up to Deck 11 forward to watch the departure, which was delayed until about 18:00. All pax were happy, as the “Vivid” light show on the bridge and opera house starts tonight about 18:00. I took some night shots of downtown, but even with the tripod, the gale force wind caused camera shake. 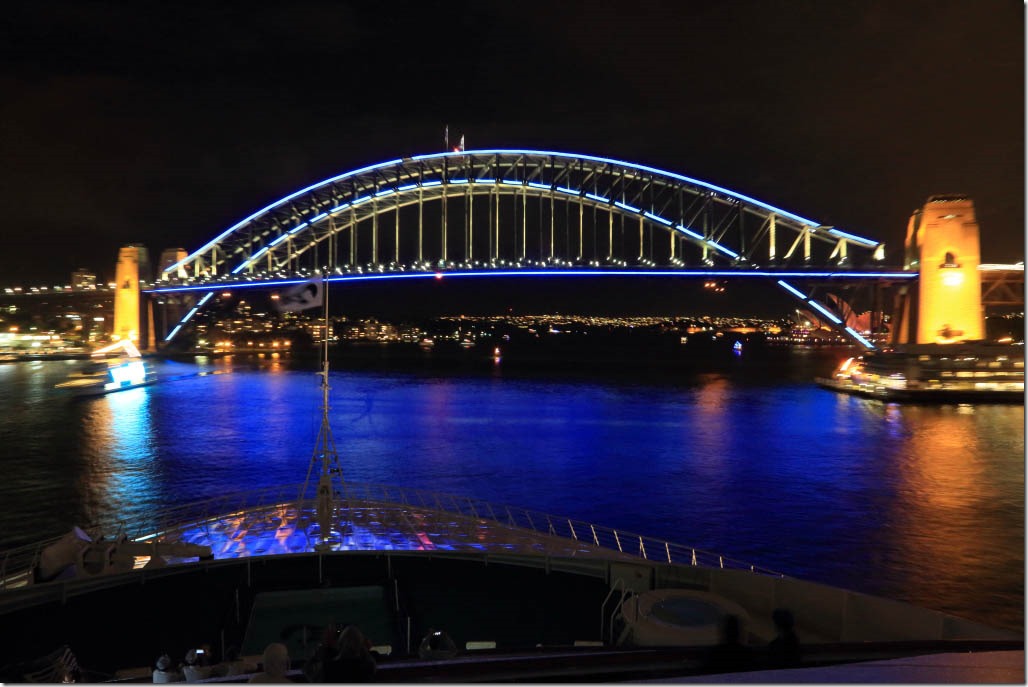 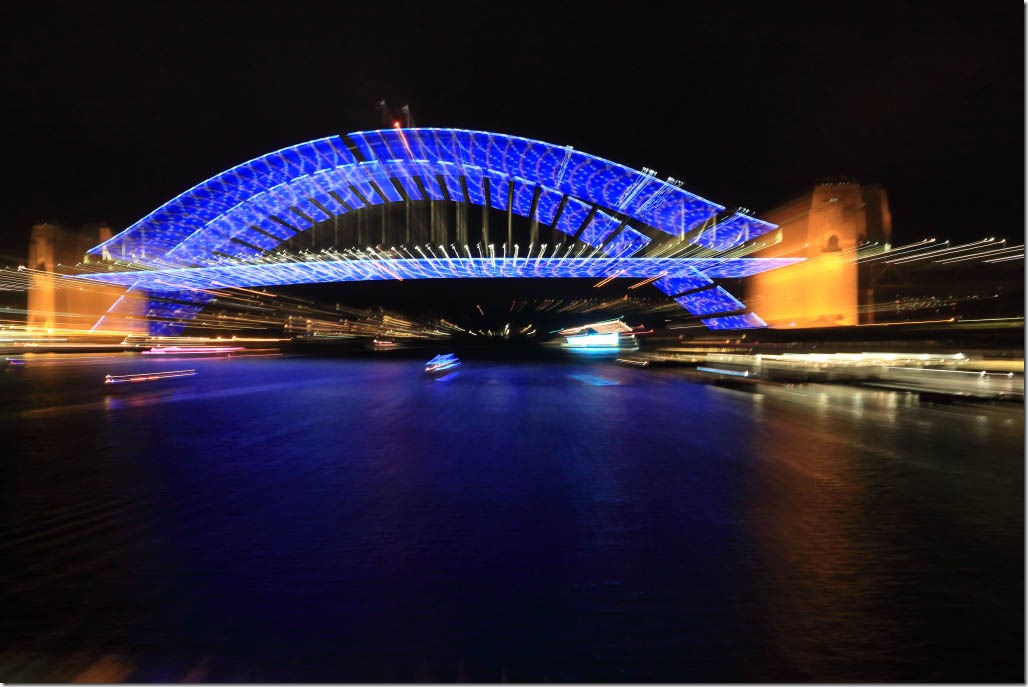 Sydney Harbour Bridge – Zoomed With A Long Exposure (another trial, which I think turned out rather well) 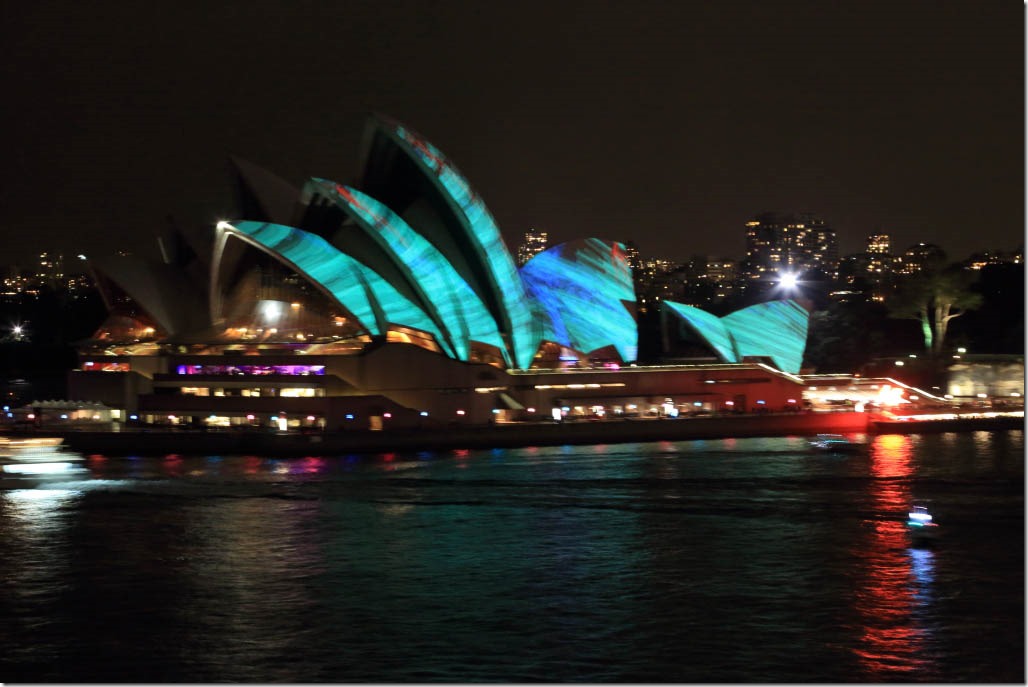 Once clear of the Opera House we returned to the cabin, changed for dinner and headed for 2nd seating at 19:45. We are seated at a table of 10, but only 1 other couple was present. Bruce and Viv are also aboard for the 104 days and we enjoyed some pleasant conversation. Hoping the others show face tomorrow.

On clearing Sydney heads we were pounding into storm force winds and 25’ swells were forecast, which resulted in some ship movement, well actually lots of ship movement. I resemble it to a baby’s cradle, but Judi doesn’t do so well, especially when her patch takes 12 hours to work and has only been on for a few hours. Basically after the main course, we headed back to the cabin, skipping desert and the evening show.