From the already totally relaxed and very happy world cruisers, we bid you good morning, as we traverse The Great Australian Bight, an open expanse of ocean to the south of Australia.

Read on to see how our sea day routine is developing.

Wind/Weather: Initially partly cloudy, but overcast by evening. N’ly winds of about 15 kts

Sea Princess maintained a W by N course, or about 280 degrees across the Great Australian Bight.

One of the benefits of sailing in a Westerly direction is having 25 hour days; yes, on 24 days of the 104 day cruise we get an extra hour to cram in the numerous activities aboard the vessel. We gained our first of the extra hours last night, so I was up bright an early at 05:30 and out on deck walking a few minutes later. The last couple of days I almost froze, so in deference to the Southern Hemisphere’s impending winter, I wore a fleece jacket over my t-shirt.  Although the temperature hasn’t improved since Sydney, the seas have eased and the ship is just moving gently, which made for easy walking. 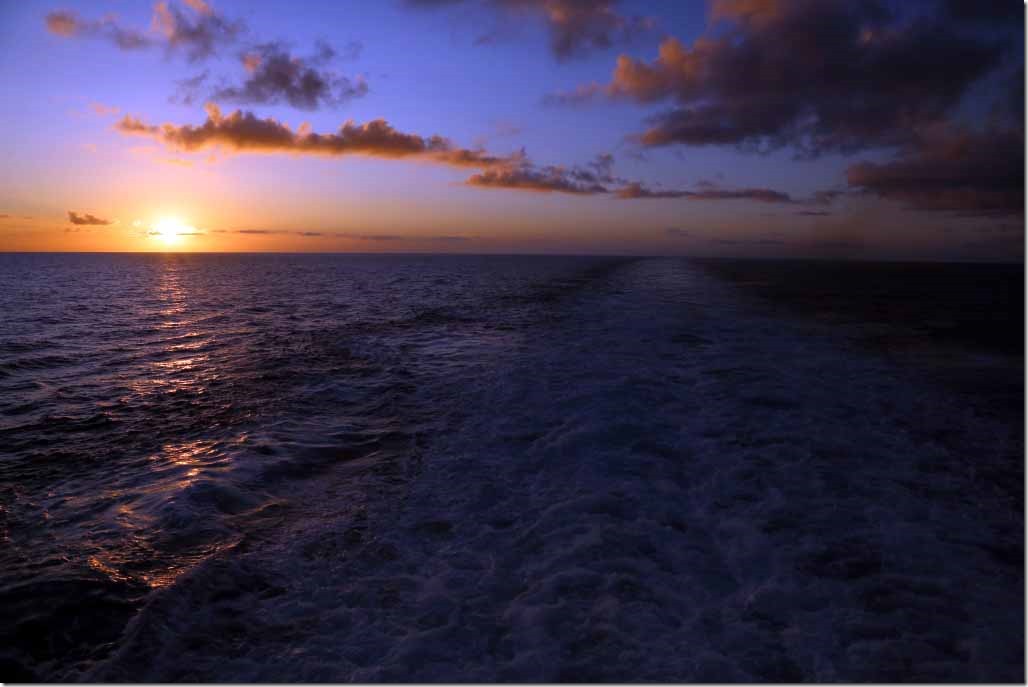 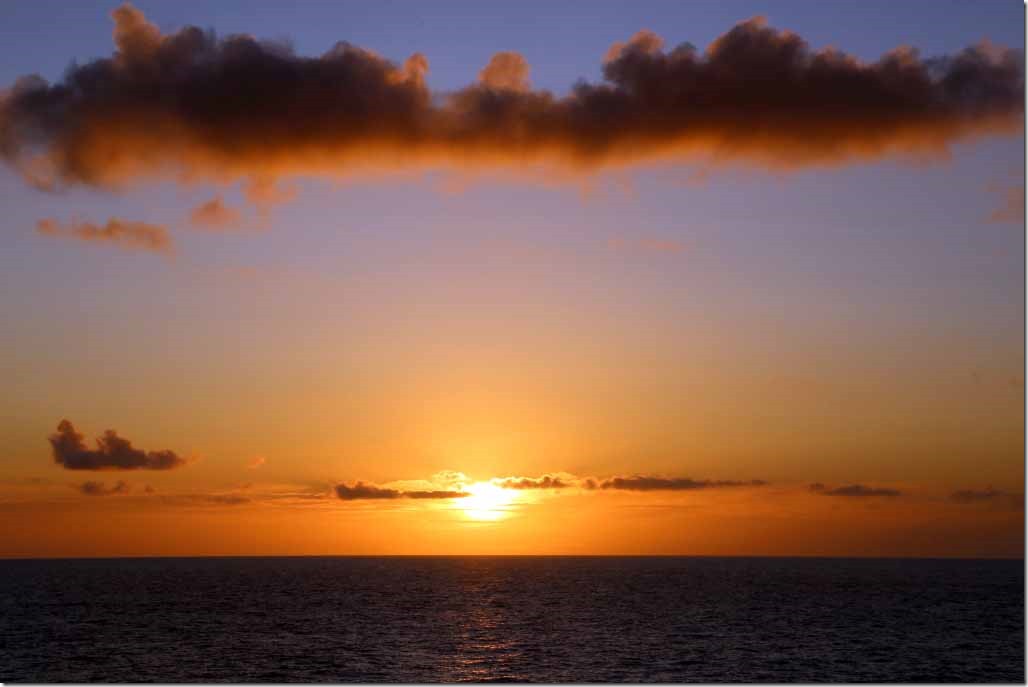 A quick check of the sky and the many twinkling stars was a good omen for the first actual sunrise of the cruise. The horizon had a small band of clouds, but otherwise the sky was clear. After walking for about 90 minutes, with occasional stops for sunrise photos, I headed back to the cabin, then both of us headed to breakfast. Nothing exotic or fancy, just the usual cold cereal for Judi and porridge and toast for me.

Next up was Zumba, which I again completed the entire session, which was well attended. A little more intense than the first class, so if this continues, by the end of the cruise it should be a serious workout. Then we had a schedule conflict with Trivia at 10:45 and the first Cruise Critic meeting at 11:00. Cruise Critic is a website forum for cruisers, with our cruise having its own thread. This was an opportunity to meet and put faces to the names we have chatted with over the past 15 months. Unfortunately, Princess have not assigned a liaison person and no staff turned up. Future meetings will include lunches and other themed events. I attended the meeting and Judi came after Trivia was over. Consequently, I don’t have any questions to report.

On completion of the meeting it was time for lunch, so down to the dining room. We sat at a table with 3 other couples, enjoying great conversation and a fine lunch. I had Beef Rolls, which consisted of ground herbed pork rolled in a thin steak, basically a thin steak wrapped around a sausage, which I know as “Beef Olive”. It was tender, tasty and well cooked. Judi wasn’t very adventurous and had a bacon, cheese burger and chips, that was served piping hot. 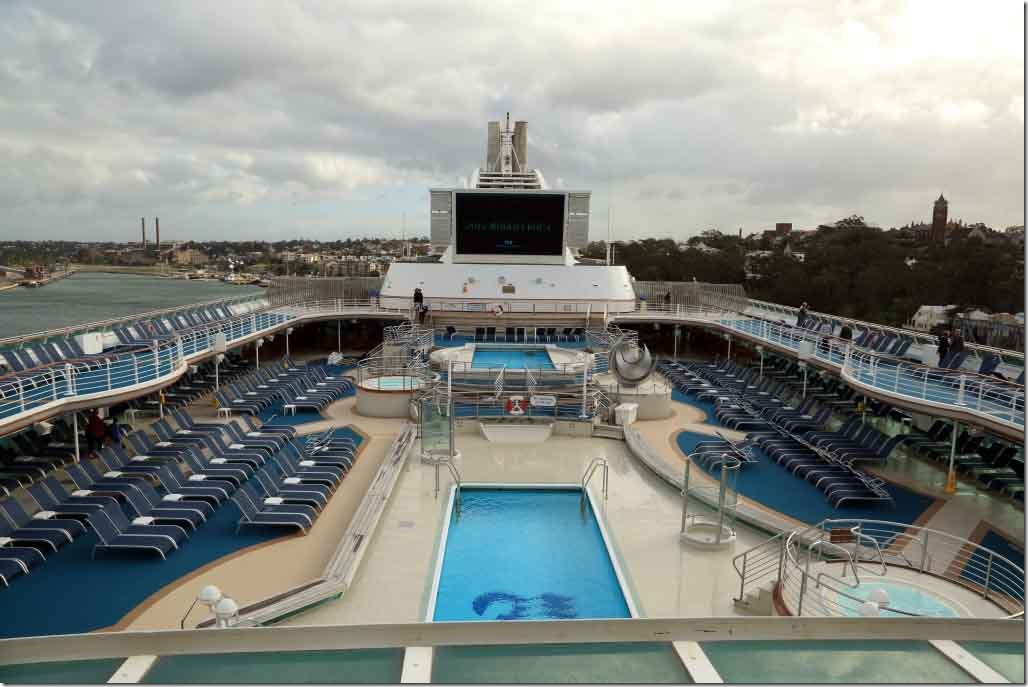 After a couple of hours working on the blog and photographs it was down to the Wheelhouse Bar at 15:00 for “Happy Hour”. This is one of the best difference between the US/European Princess ships and the Australian ships. Happy hour consists of serving 2 drinks for each one purchased, so if you both have the same drink you get 2 drinks and only pay for 1. Judi doesn’t drink beer, so we compromised on a glass of Chardonnay. The other difference noted so far, is the lack of an Elite Lounge, which is a lounge reserved for those of us in the Elite category, where we can enjoy a pre-dinner beverage and some horses-dovers.

Tonight is our first formal night, so we returned to the cabin after PM trivia, to get the best bib and tuckers on and head down to the Captain’s Cocktail party and Champagne Waterfall. This is another example of Princess reducing the standards, as previously the Captain’s Cocktail was a separate function, where they served any drink of your choice and tab nabs. Now all they provide is cheap champagne and orange juice. The Champagne Waterfall used to be held on a separate cocktail party, close to the end of the cruise, but now they have combined them and reduced the number of cocktail parties. We have seen way too many Champagne Waterfalls, so we milled around Deck # 5, chatting with a couple from Freemantle that we met at the earlier Cruise Critic meeting. We also saw a few Pursers standing around not chatting to passengers, which was unheard of in my day. So we called a young Jnr Assistant Purser over and got her involved in our conversation. How times have changed, as in my day we mingled and and led the conversation.

After the party it was off to dinner and surprise, surprise, we had another 2 new people at the table. Fortunately the new couple from last evening didn’t bring formal attire so they ate in the buffet. This makes it 10 people assigned to a table that seats 8 comfortably. Should be interesting tomorrow night, if everyone turns up. Rather than the usual welcome aboard formal night menu we had the special menu of selections from the past 50 years. The galley was obviously having an off night, as at least 3 dishes were served cold, with our Head Waiter Nelson, personally returning to the galley and delivering a replacement. For main course we both had fillet steak, mine medium rare and Judi medium. Both steaks were cooked to perfection. 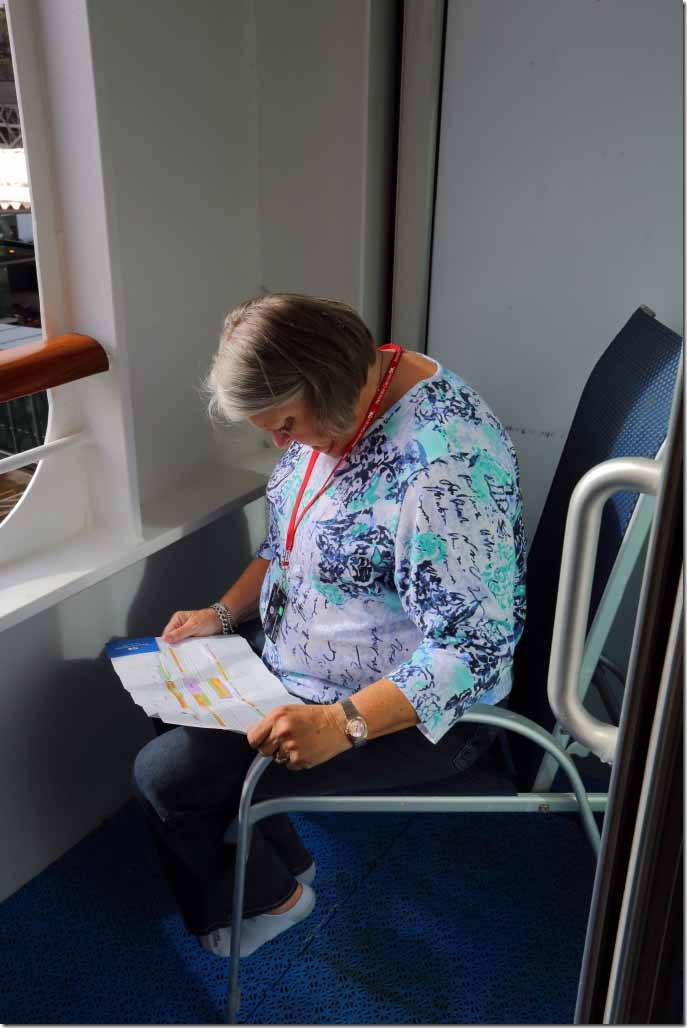 We had planned on attending the production show starting at 22:00, but we didn’t even finish deserts until after 22:00. Yes, at 2 hrs 20 minutes, without finishing with tea/coffee, the service is painfully slow. By the time we reached the theatre the show would be half over and probably no seats left, so we called it quits and headed to the cabin. On return to our cabin, we spent a very pleasant 45 minutes  sitting on the balcony, enjoying the peaceful sounds of the passing waves. Unfortunately it was completely overcast, so no stars to enjoy. This was the perfect wind down after a fine dinner.