Today is the first of 7 sea days between Fremantle and Colombo, but at 17:00 we will be stopping above the resting place of HMAS Sydney II to conduct a very well attended and moving memorial service. In addition to the memorial service, we also attended an excellent presentation by a retired RAN Commodore. 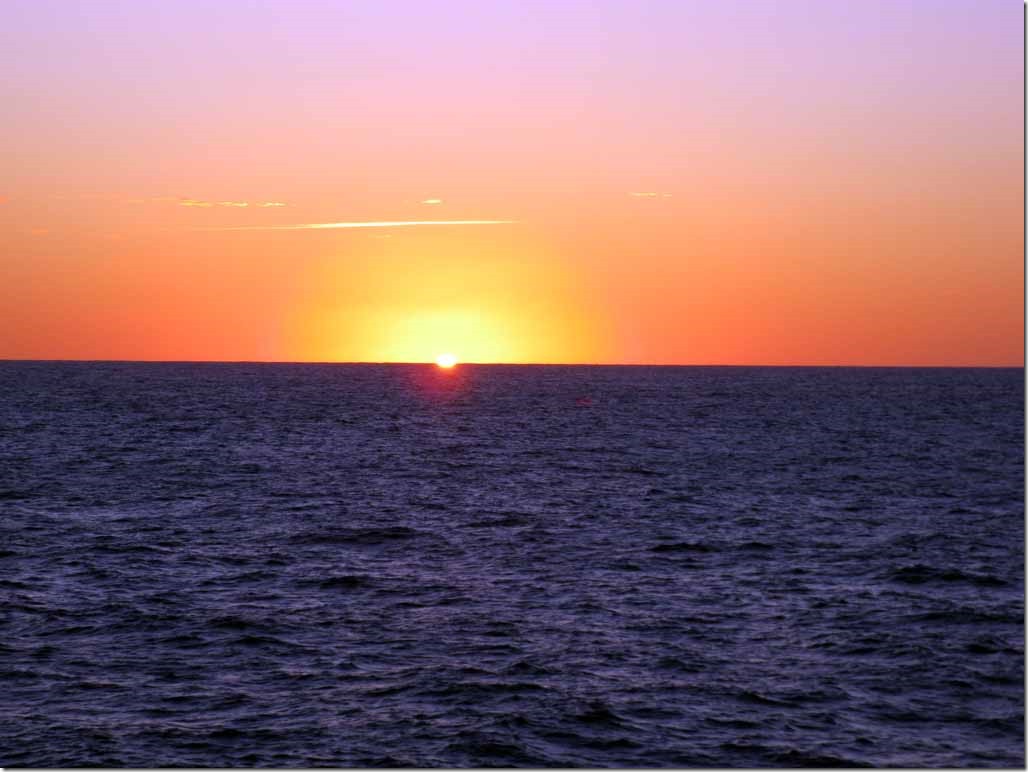 Our very first glimpse of the sun in the Indian Ocean

HMAS Sydney II was one of three Leander Class Light Cruisers operated by Royal Australian Navy (RAN), which was initially built for the Royal Navy as HMS Phaeton, at Swan Hunter on the River Tyne. Sold to the RAN in 1934, she was renamed and re-launched as HMAS Sydney.

At the commencement of hostilities in WW II, she performed convoy escort duties and home water patrols around the Australian Coast. In May 1940 she joined the British Mediterranean Fleet for an 8-month deployment, during which she sank two Italian warships. She returned to Australia in early 1941, resuming her convoy escort and home water patrols.

On 19th November 1941, she engaged the German Auxiliary Cruiser Kormoran, which resulted in the loss of both vessels, the Australian vessel with the loss of all hands. The wreck of HMAS Sydney was discovered on March 17th 2008, at a depth of over 8,000 feet. 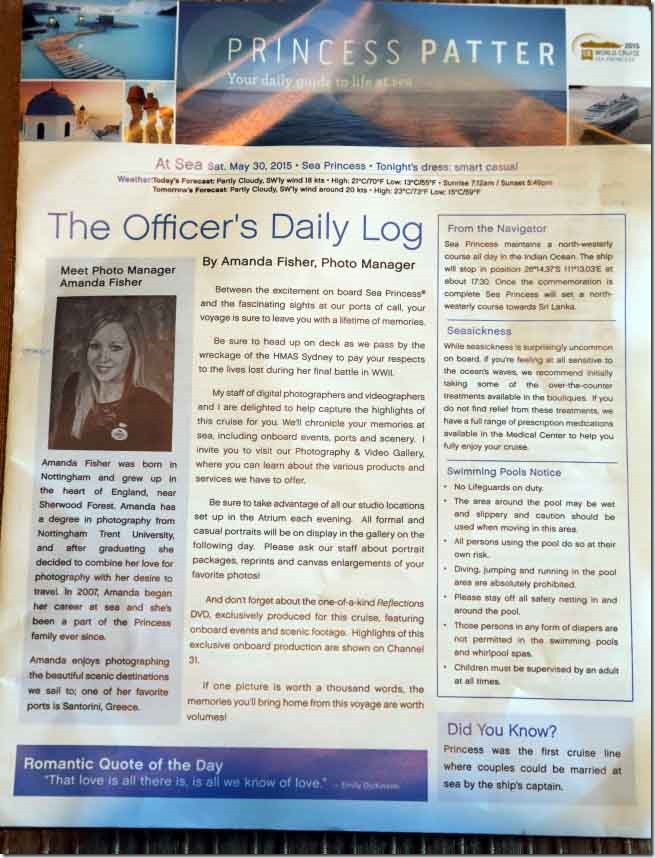 Based on the above noted daily schedule, we planned the following:

Down on deck 7 for my morning walk by 05:45; but wait, for the first morning since Sydney, somebody beat me down and was already pounding the deck. By 06:00 we had over a dozen and by 07:00 it was a constant stream of walkers, and even a couple of joggers. I can only assume a number of fitness enthusiast boarded yesterday in Fremantle, or the buffet and/or ship’s laundry are already causing shrinkage to articles of clothing. I completed about 5 miles, only taking a couple of short breaks to snap some sunrise photographs. At breakfast, Judi had her usual, but rather than porridge, I tried the Eggs Benny, which was tasty.

Immediately prior to the sun rising

At Zumba, Sarah stepped it up a notch and gave us a great workout, working up a healthy sweat. On completion of Zumba, it was straight to the Princess Theatre for the Enrichment Lecture, which apparently is a daily feature every day to Dubai. All lectures are presented by Commodore Bobb Trotter RAN (retd) and focus on a multitude of RAN subjects. Commodore Trotter is an good speaker and prepared an exceptional presentation using a combination of powerpoint slides and short film clips. Today’s presentation titled, HMAS Sydney II – Triumph, Tragedy and Closure, covered the vessel’s history and discovery of the remains in 2008. An excellent presentation and I eagerly await the remainder. 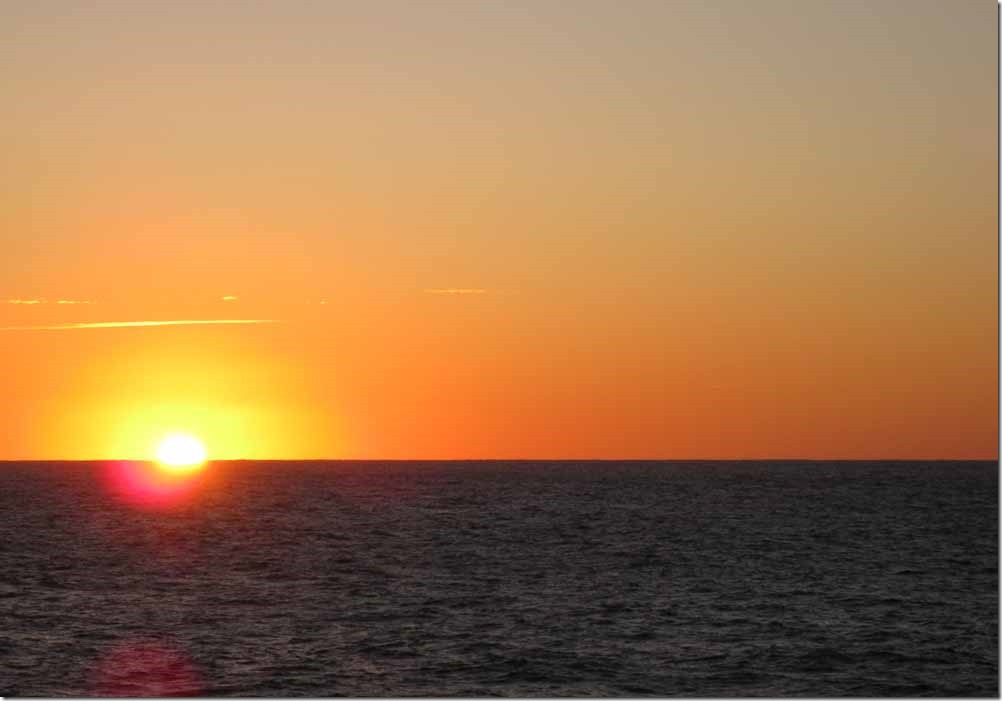 Immediately after the presentation we headed aft to the Vista Lounge for AM Trivia. We scored a respectable 17/20, but really had 19/20, which would have been a winning score. One question was how many nano seconds in 1 minute. I wrote 60 Billion and passed it to Judi, who was writing our answers. Unfortunately she missed the 60 and only wrote Billion. The last question was what is 17 in the binary system. I initially wrote 1001, but on checking realised I forgot a zero, as it should have been 10001. However, our sheet had already been handed over in preparation for marking. Oh! well, the prizes really weren’t worth the additional baggage.

Off to lunch at high noon, we were seated with 2 other couples and a single lady. After a great lunch and conversation we returned to the cabin for a couple of hours to catch up on the blog, which was a couple of days behind. Still haven’t had a chance to start processing the photographs from Fremantle/Perth, hopefully tomorrow. Had planned to watch the “Top Gun” film, but being so far behind on the blog/photos, decided to catch it during a future showing. PM Trivia we achieved a respectable 16/20, but yet again, twas not sufficient to win cheap plastic prizes.

We then headed up to Deck # 12 for the HMAS Sydney Memorial, where they had a number of seats laid out in front of the podium. When Judi and I arrived, only a few were taken, so we sat down, ordered a drink and waited for the memorial service. The deck and chairs quickly filled up, and just prior to the start, I witnessed a veteran with walking stick and a chest full of medals looking for a seat. No way I could remain seated, so I gladly vacated the seat and moved to the back. Throughout the service the Sea Princess remained in position above the final resting place of HMAS Sydney II. While the service was short, it was most definitely a moving experience, as we remembered the entire compliment of over 600 hands that perished on HMAS Sydney. Jolly good show, Princess Cruises for scheduling the memorial service and interrupting the voyage. 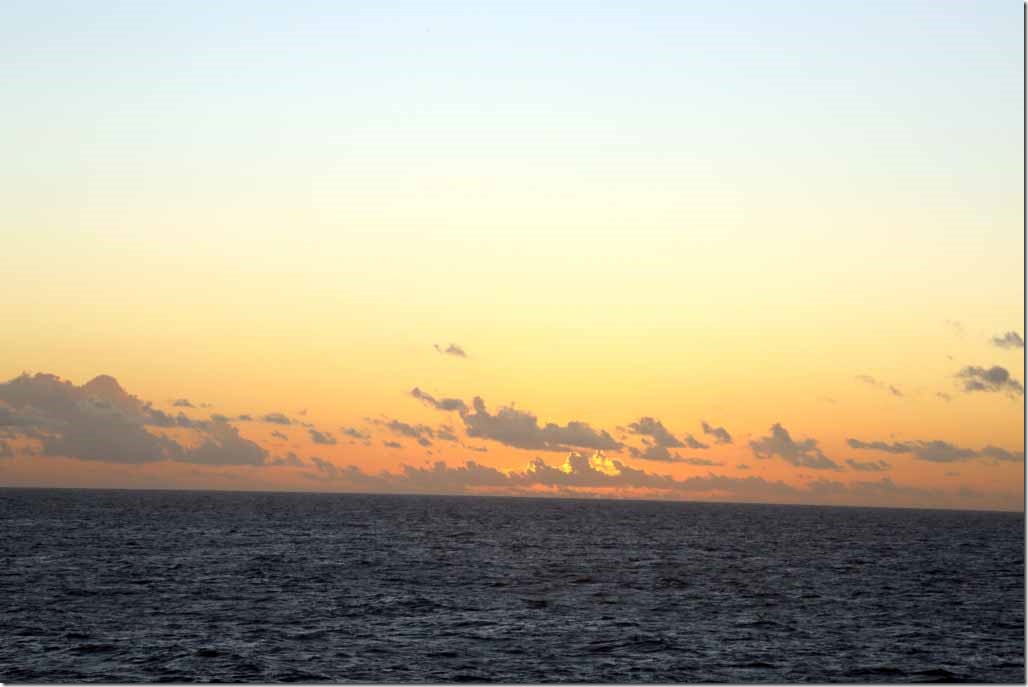 For dinner and the evening show, again please accept my apologies for lack of photographs, as I forgot the camera in the cabin. Dinner was Asian Dinner, which yet again was well cooked and presented. We are definitely happy with the quality of the meals, although the service is somewhat below par. Our waiter this evening only had the 8 of us at our table and we were still one of the last to leave the dinning room. Even the Asst Waiter is slow on the uptake, even on day # 9 asking if we want tea or coffee after dinner. We always have tea and at traditional dinning, most waiters have it figured out by day # 2. Oh well, surely by the end of 104 days then will have figured it out.

The show this evening was Bayne Bacon, who is a regular performer we have seen of many previous cruises. He likes to point out that this is his real name, as nobody would ever pick that for a stage name. An excellent musician he plays classical piano and the guitar, but also has a tremendous sense of humour. In my opinion, he is funnier than the 2 previous acts that were billed as being comedians.