As we approach our next port of Colombo, today is the day we crossed back into the Northern Hemisphere, which on this trip is our 4th crossing of the equator. As I write this at Noon, we have 63 miles to the equator, so I estimate we will be back in the Northern Hemisphere shortly after 17:00. No crossing the line ceremony today, but I suspect something is planned for tomorrow, as a few days ago they requested volunteers to participate.

Sea Princess maintained her NW’ly course across the Indian Ocean, but has reduced speed to about 16.5 kts. While the Princess Patter states we will cross the Equator about 16:00, I believe it will be shortly after 17:00.

Based on today’s schedule of activities, we plan on attending the following:

For the first few days I was normally the first person down walking on the Promenade Deck, but this morning, on reaching the exterior door, I got passed by a stampede of at least 20 other pax already out walking by 05:35. Still bothered by the blisters from a few days ago, I again took a more sedate pace, completing a respectable 15 laps or 5 miles. I missed the best sunrise photograph about 20 minutes before sunrise, as the colours in the sky were spectacular. On leaving the air conditioned accommodation, the camera immediately fogged up, which is typical for the hot and humid tropics. Options to prevent the fogging do exist, but then generally include making noise. Making noise and waking Judi at 05:30 would result in the inverse of, “Happy Wife, Happy Life”. Therefore, waiting 10 minutes for the fogging to clear is the preferred option.

I found the shape of the clouds at the horizon very interesting.

Zumba was another good workout, then I headed up to the Princess Theatre for the daily lecture from Commodore Trotter. Today’s lecture covered the discovery of the Swan River, initially by the Dutch and latterly ship of the Royal Navy, under the command of Captains Fremantle and Stirling. He discussed at great length the establishment of a west coast Naval Base and the few false starts, before the construction finally commenced in the 1970’s. Today, Australia is a two ocean navy, with many Collins Class submarines and surface ships based in Fremantle.

Shortly after Noon we headed down to the dinning room for lunch, with both of us enjoying a steak sangy & chips. We had 2 other couples at the table and enjoyed some great conversation and were provided many ideas of places to visit during our post cruise travels in Australia.

At the cruise long trivia we got great news that yesterday we were one of 3 teams that got all 10 questions correct. After a couple of average days, this will help our cumulative total. Since 3 teams got perfect scores yesterday, Jill ramped up the difficulty level and focussed mostly on literature, which isn’t one of my strengths, but fortunately we have Judi, who is our all round brains on the team. At PM Trivia, we scored a highly respectable 19/20, getting a single word wrong on our incorrect answer. The question being what does ASIC stand for? We answered Australian Security and Insurance Commission, but the correct answer was Australian Security and Investment Commission. While we did rather well, 3 teams scored a perfect 20/20.

Shortly after 17:00 the Captain provided his daily update, advising that we were 3/4 mile South of the Equator, which based on the TV reports we crossed at 17:14. This is our 4th crossing of the Equator during the current Grand Adventure.

Walking throughout the ship in the evening we have heard an excellent entertainer in the Crooner’s Lounge, who has a large and loyal following, as we never see any spare seats. Well, this evening the Cruise Director hit a 6, or home run, as Derek Floyd is performing in the Vista Lounge, with the Sea Princess Orchestra. His show is a tribute to the music of Lionel Richie. When we arrived, Derek was walking around the Lounge chatting to everybody and thanking you for coming to his show. He comes across as very humble and just an all-round genuine nice chap. The show was top notch, with Derek entertaining us for a full 45 minutes. He is not only a terrific singer, as his fingers dance magically across the ivory keys of the grand piano. 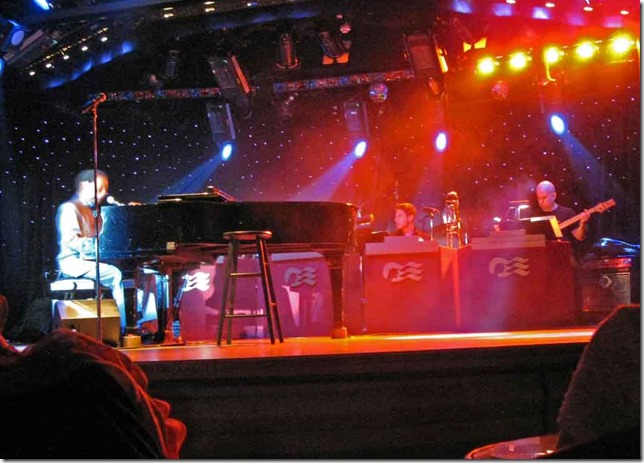 On completion of Derek’s show we headed up to the pool deck for the Captain’s Circle Member Party. This is normally entry controlled, by invitation, but probably since very few “Blue Cards” or first time cruisers are present, I suspect they just opened it for all. The resident band Fusion were providing the music and drinks were flowing freely. This is definitely a pleasant change from some of the other ships, where for a couple of years, free drinks are almost rationed and only offered for about 1/2 hour. 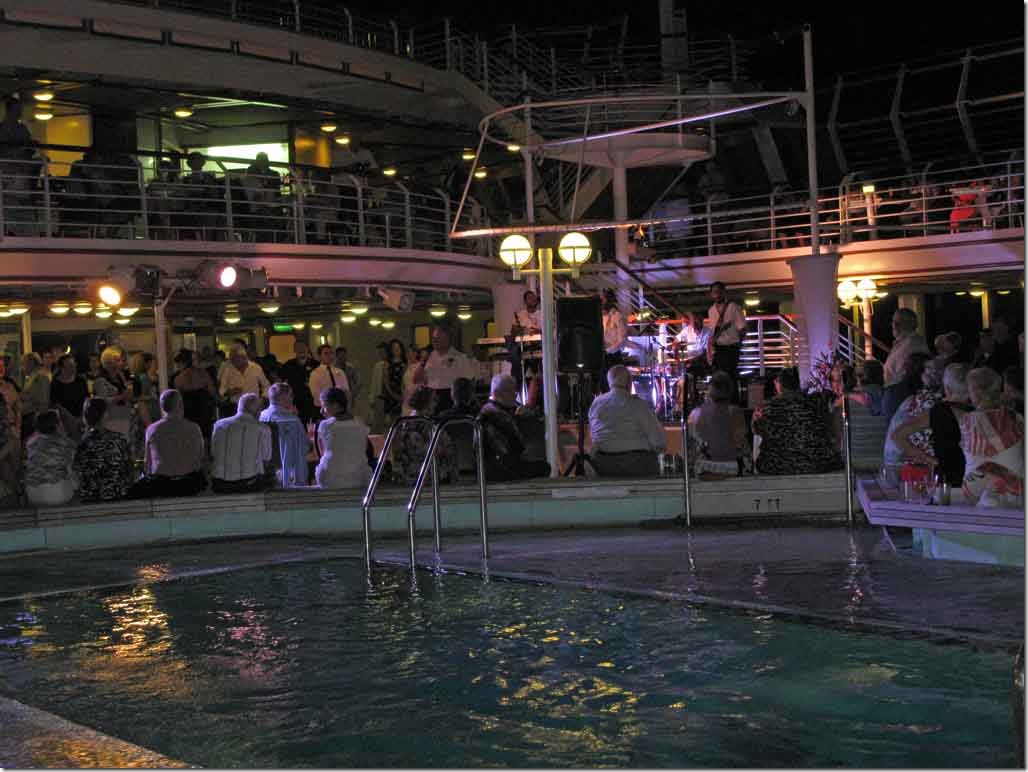 Captain about to introduce the most travelled passengers.

They introduced the top 3 cruisers, with the 2nd and 3rd highest having 1,700 days at sea with Princess and the top cruiser having 2,050 days. We have a long way to catch up. Spent an interesting 1/2 hr chatting with a couple for Fremantle, but he was originally from Glasgow. Nice chap, but poor choice of football team, as he supports the sods from the East end of Glasgow, although he did say his brother supports the almighty Rangers.

Dinner was another menu from the East, Oriental rather than the previous Asian. Prior to the cruise, we had wondered how the menus would work, would we get the same standard menus issued every 15 to 20 days, or do they have a larger selection for the world cruise. In addition to the standard menus (Sailaway, Captain’s Cocktail, Baked Alaska, etc) they are filling the gaps with country themed menus, which is rather topical for a World Cruise. As usual, with the constant and engaging conversation at the table, I forgot about the P&S camera in my pocket, until deserts were served. So, today’s foodie photo is pudding or desserts. 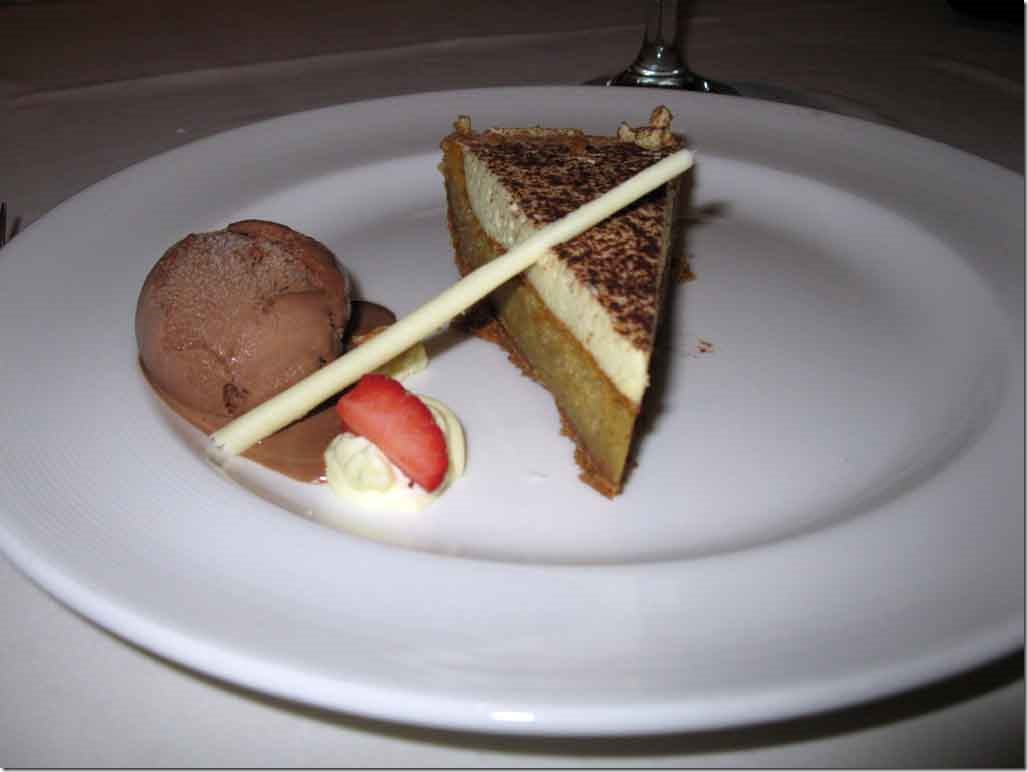 Pavlova, which is another change from the North American & European ships. On the Australian ships they change the always available NY Cheesecake to Pavlova

After dinner we headed back up to the Sun Deck for the Ultimate Deck Party and Happy Hour. The resident band Fusion were providing the music and these guys are amazing, as they rarely take a break while playing. The songs literally run continuously with no break, between most songs they didn’t even skip a beat, almost seamless. 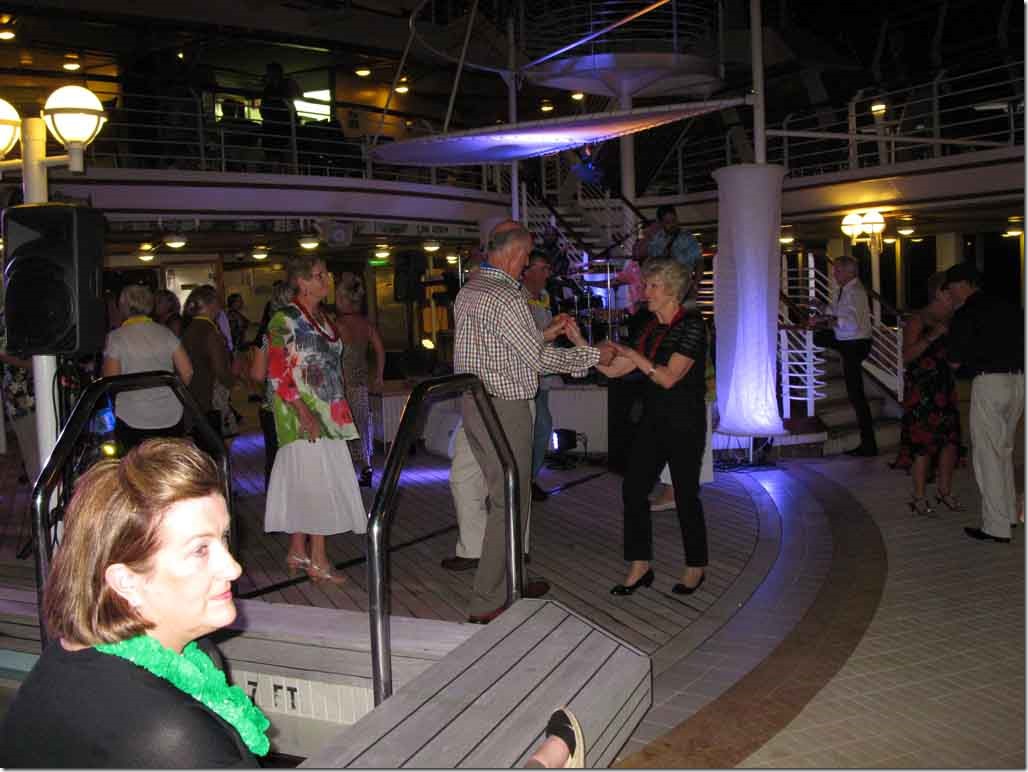