After a day’s respite in Colombo yesterday we are back into the peaceful routine of a sea day, but is it really that routine or even peaceful? One consistency experienced since departure Sydney is the weather and for this short four day hop to Dubai, the forecast doesn’t look positive. Read on for our experiences, as we plough north through the Indian Ocean, towards the first named cyclone of the season.

Sea Princess maintained WNW’ly courses from departure Columbo to about 08:00.  When abeam of Vilijam Lighthouse, on the south coast of India, course was altered to NW’ly heading up the west coast of India. About 21:00 we passed Androth Island, which was on the port side at a range of about 50 miles.

Based on the schedule posted above, we planned to attend:

This morning’s exercise didn’t follow the usual routine, as at 05:30 all doors to the Promenade Deck were closed. The seamen weren’t conducting a major cleaning, so it wasn’t too difficult to figure out why passengers weren’t welcome on deck. I just started walking around the lounges and very quickly a few others joined in following mostly the same track. About 07:00 the Promenade Deck was opened and I was correct with my assumption why it was closed. They have additional security measures installed and have lookouts posted on each side at the fwd end of the deck. The lookouts will be 24/7 until we clear potential pirate waters. I was very impressed to note the Captain has ensured they have large chilled water containers, and a table set with tea/coffee and a tray of biscuits. Jolly good way to look after the crew as it helps in encouraging great crew morale. Having spent 2 hour shifts on the foc’stle on my first ship, it is a horrible and terribly boring task, so it certainly helps to look after the crew’s basic needs.

A schedule change this morning permits me to complete Zumba, join the team for AM Trivia and then run to the Princess Theatre for the daily lecture from Commodore Trotter. Today’s lecture was the first on submarines, specifically one of Australia’s first ever submarines – AE2. 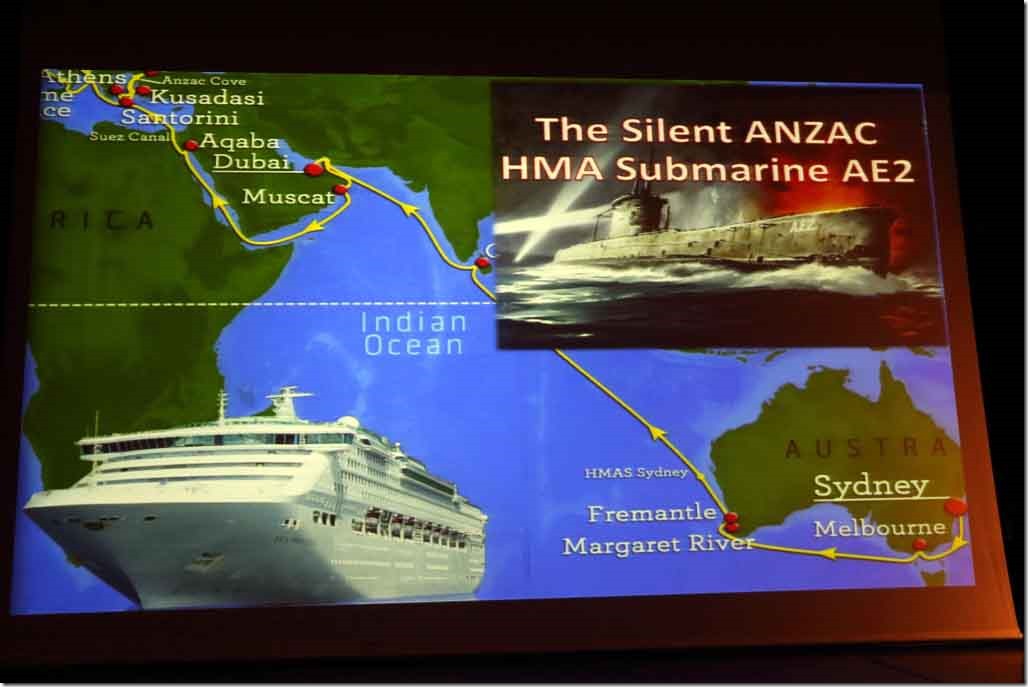 A British built “E” Class submarine that arrived in 1914, she was named AE2 and assigned to supplement the British Mediterranean Fleet. It was tasked with entering the heavily mined Dardanelles about the same time as ANZAC troops landed at Gallipoli. With some exceptional navigation and good fortune, AE2 managed to enter the Sea of Marmara and created a diversion by sinking a ship. 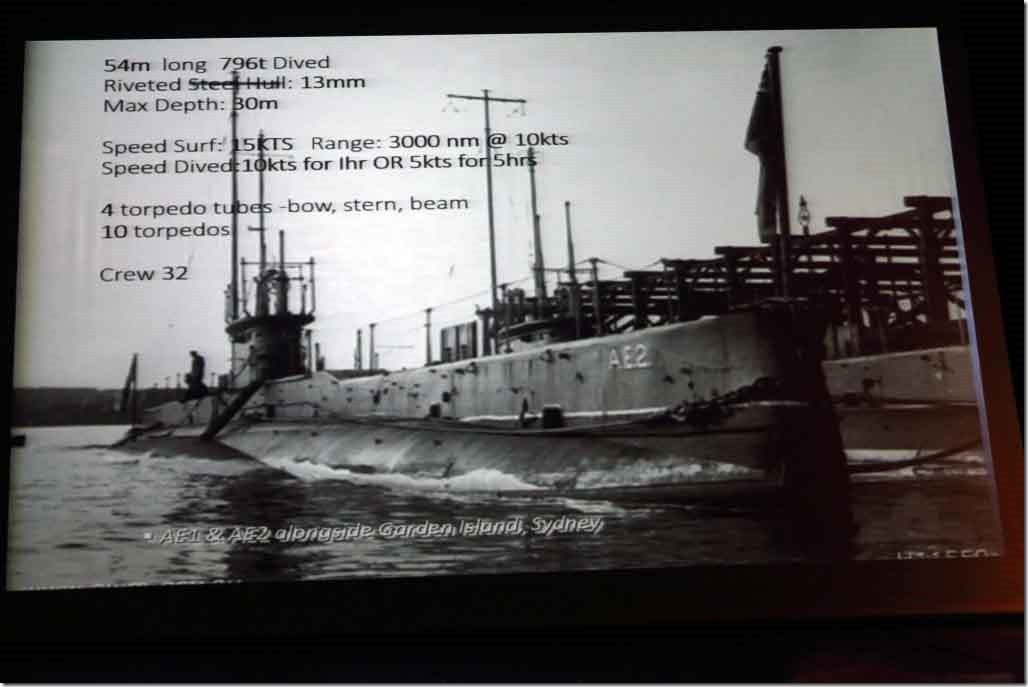 Her eventual downfall was her limited endurance submerged, as she could only last 1 hour at 10 kts or 5 hrs at 5 kts, therefore she required extensive hours on the surface re-charging batteries. She was caught on the surface and sunk by a Turkish torpedo boat.

Our afternoon was predominantly in the “Ice Box”, as most passengers have renamed the Vista Lounge. Starting off with cruise long trivia, we got the bad news on yesterday’s score, which was a meagre 5/10, after 100% the previous day. This places us in the middle of the pack, so lots of room for improvement before we arrive in Sydney. After trivia we all were asked to depart the lounge, while they set up for afternoon tea. So we returned to our usual seats at 15:30 enjoying a few cups of tea and a couple of scones. Immediately after high tea we joined PM Trivia, scoring a respectably 18/20. but yet again we missed top honours by a single point.

Shortly after 17:00 each evening, the Captain provides a navigational update and a synopsis of the following day’s weather. Today, the news wasn’t that great, as he advised we are altering course to port to miss the first named tropical cyclone. So it looks like the weather experienced since departure Sydney will remain consistent for another few days.

The evening entertainment tonight was brilliant, with Peter Howarth, who is a replacement lead singer for the “Hollies”. He put on a terrific show, singing hits from the Hollies, Roy Orbison and Sir Cliff Richard. We will definitely return for his next show.

Thoroughly well entertained, we stopped by our friend Dean’s cabin, to pick him up for our special dinner this evening. Our excellent Head Waiter, Nelson got an additional setting at our table, so Dean could join us and even arranged for the galley to make a special chicken curry. Although slightly on the mild side, it had excellent flavour and was served with basmati rice, mango chutney and pompadongs. 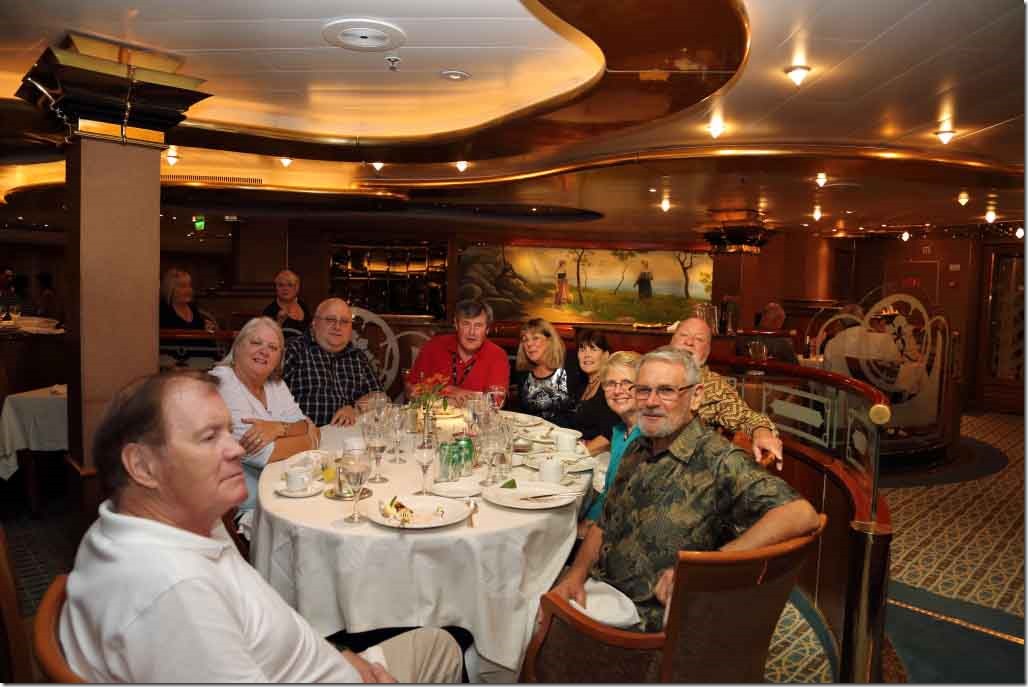 We also had a birthday to celebrate this evening, so our Head Waiter brought Jude the traditional Princess birthday and they sang happy birthday.