Our first overnight port on this World Cruise, with I suspect many pax happy to experience the extended shore leave, especially after the few previous days at sea. It was actually rather pleasant getting back to the ship late last evening and finding it still alongside early this morning.

Wind/Weather: NE’ly winds about 20 kts. No clouds, but hazy

Once all pax and crew were aboard, Sea Princess commenced singling her lines and departed the berth shortly prior to the scheduled departure time of 13:00. The Captain thrust off the berth and then moved ahead along the dock towards the port exit. It is a rather narrow entrance, so fortunately we didn’t meet any opposing ships. Once clear of Port Rashid, Sea Princess set a course to proceed along the shoreline, but far enough offshore to clear the anchored ships and oil platforms. About 19:00 Sea Princess navigated through the Straits of Hermuz, setting SSE’ly courses towards Muscat. 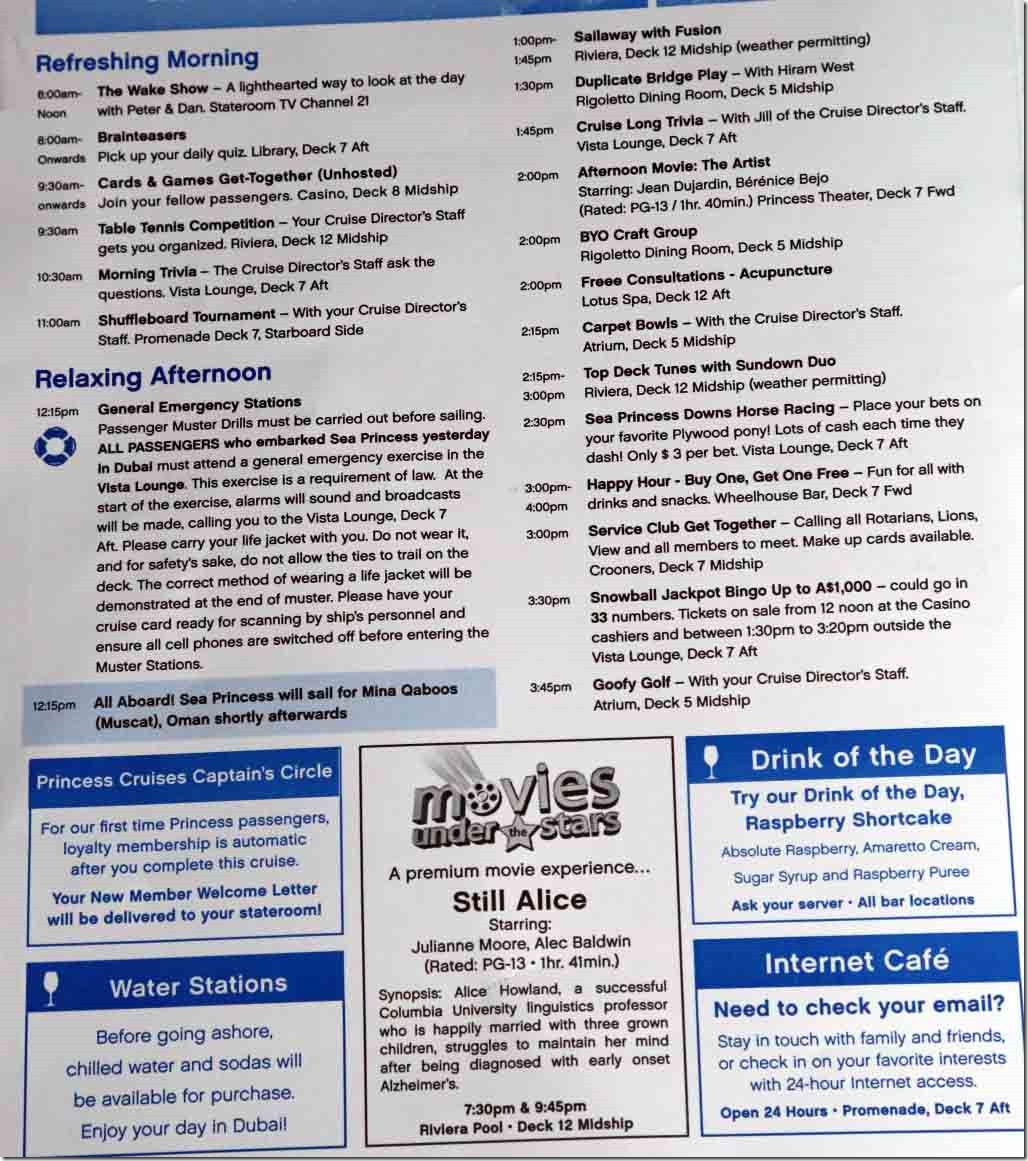 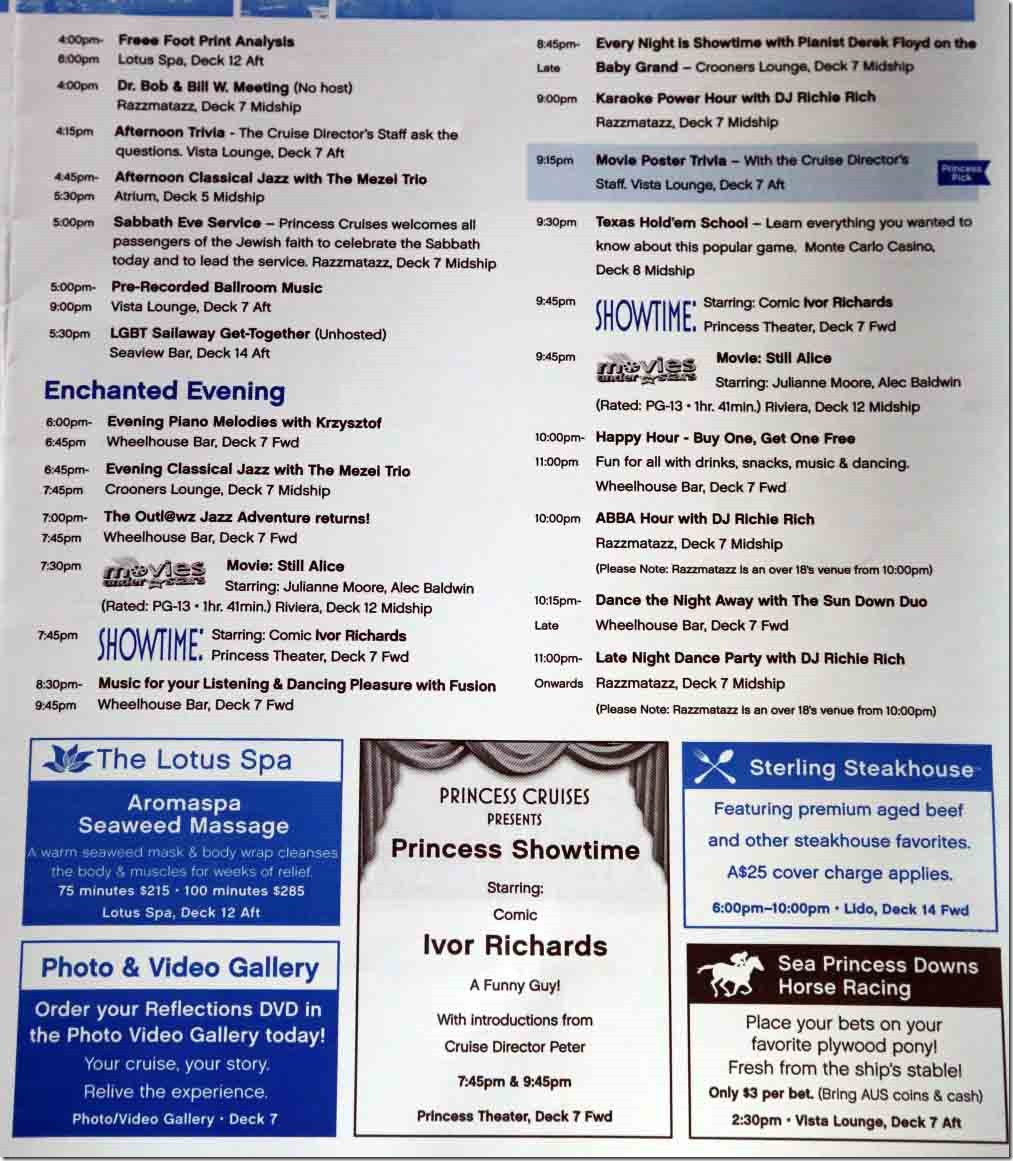 Our day commenced rather early this morning, as we headed ashore to the passenger terminal to Skype with our daughter, son-in-law and grandson. The early start was definitely worth it, as we had a great wireless signal and with few others using the wi-fi, we got lots of bandwidth. We spent a great hour chatting and checking out our grandson’s progress. Wow, early indications have him well over 6’, just like his dad. Very happy with our first Skyping since boarding Sea Princess, we headed to breakfast with big smiles.

After breakfast we returned to the cabin to find another World Cruise memento had been delivered. They had been promised since Sydney, but finally they were delivered. It is a rather nice backpack with lots of compartments.

After breakfast we headed back ashore for more free internet time, but way too many others had a similar idea, so very little bandwidth. It was painfully slow, so I only completed a fraction of what I had planned. All aboard at 12:30 and shortly before 13:00 the Captain let the lines go and we were off on another exciting voyage, which we can only hope will be devoid of tropical cyclones. Judi enjoyed some lunch in the buffet, while I captured a few photographs of the departure. 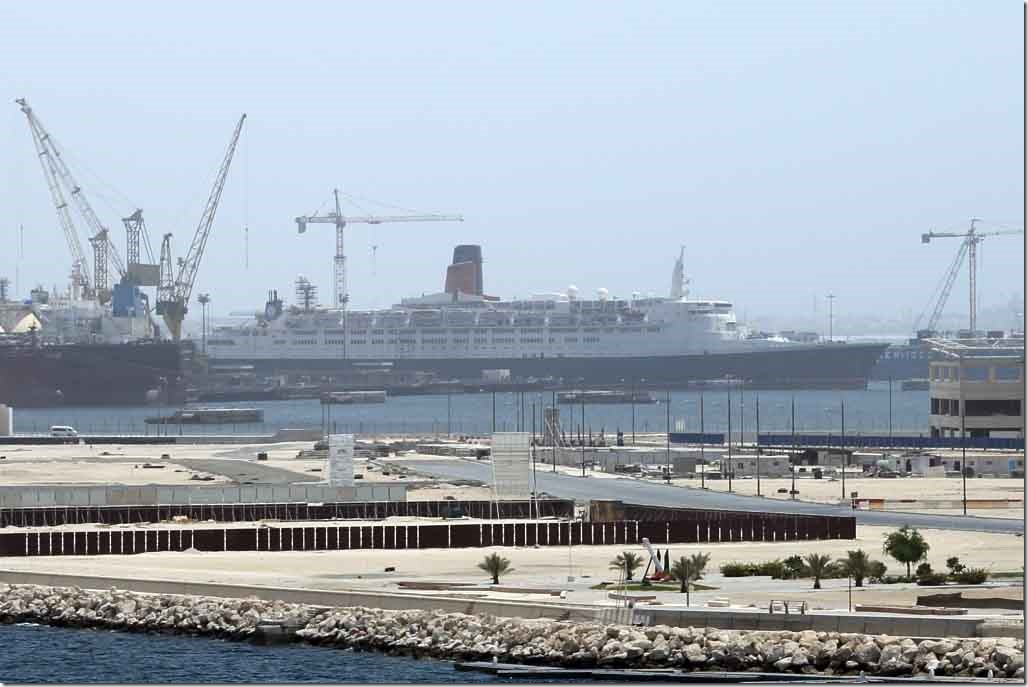 The old QE2 still secured alongside in Dubai 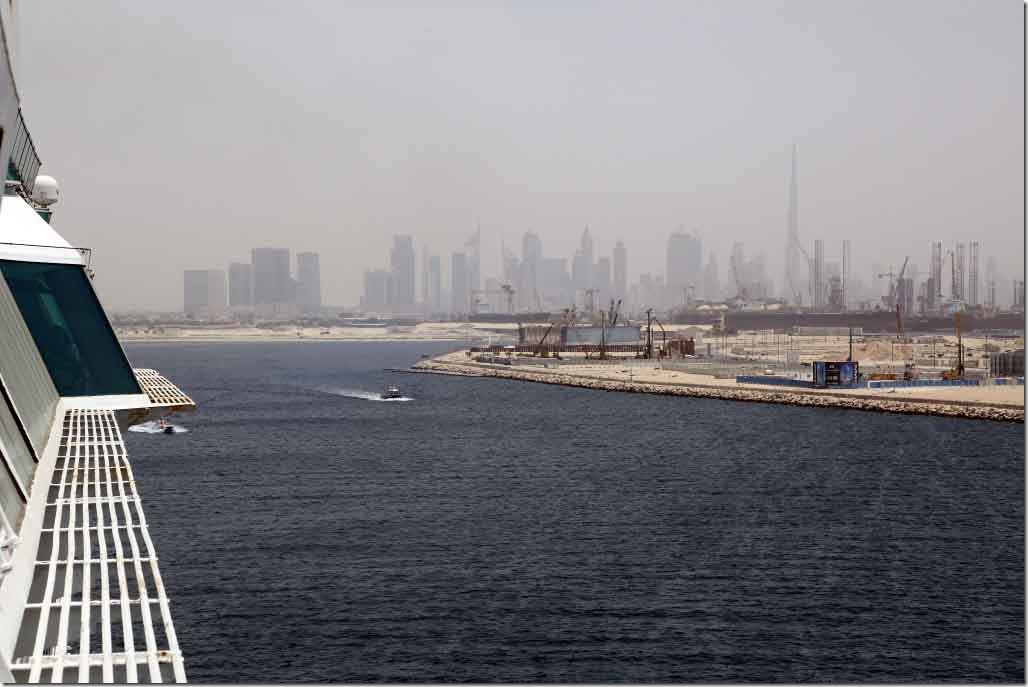 Looking along length of Sea Princess with Dubai in background

Pool deck on departure from Dubai

Before dinner we spent an enjoyable couple of hours sitting on the balcony. For the first time this cruise, you could almost refer to the water as being a millpond, but it was still hot, humid and hazy. Regardless, it was very pleasant sitting watching the ship slicing effortlessly through the water, with barely a ripple. As we approached the Straits of Hermuz we started to see more ships appearing through the haze. Judi was trying to identify the various types of ship.

We even returned to the dinning room this evening for dinner, the first time in three days. Great evening, as we were all present and great food from the standard Sailaway Menu.