We have eagerly awaited today’s port, as it has been almost 40 years since my previous visit to Muscat on an old cargo ship. How will it compare to the glitz and excesses of Dubai?  To view the local sights we initially considered catching the shuttle into town and then jumping on the HoHo bus, but it wasn’t any cheaper than the ship’s tour, so elected to stay with the ship’s tour of the Grand Mosque, Old Souq, Museum and Royal Palace.

Reporting to the Wheelhouse Bar we were surprised that our tour filled the entire Princess Theatre, or about 500 pax. That number of pax can create an organisational nightmare, but the entire day ran smoothly without excessive queues. To prevent delays on the ship, the Shore-ex Team called for groups of 3 buses, which prevented long delays at the gangway and also helped to provide separation between buses during the tour. Our bus was in the 2nd group and we had an easy transit to the gangway and exit from the ship to the bus. All stops were well managed by the tour company with all buses well sequenced and the tour guide keeping us in shade until the bus arrived. All in all, one of the better managed tours.

First impressions of Muscat are vastly superior to Dubai, as they actually have a varied terrain, with hills and crystal clear atmosphere – no smog or sandstorms around here. This is only a first impression, but it would be confirmed as we continued the tour.

Hills surrounding the port of Muscat with nice clear air to breath. No pollution or sandstorms around here.

I can’t recall much about Muscat from my last visit other a vague recollection of a small village. As we docked it would appear that it may have progressed from a village to a small town.

Old Muscat, which is a pleasant small town adjacent to the port and is completely devoid of high rise buildings.

Departing the docks we headed inland through a mountain pass, passing through the old City Gates into what is known as New Muscat. The city has a population of about 1,000,000 which is about 25% of the total population of the Sultancy of Oman. We immediately noted that this city has been well planned, with exceptional quality roads and even have sufficient lanes to carry the traffic. They also have clearly defined building standards, which include a maximum height and exterior colour. No high rises or traffic gridlock this morning.

Some of the tallest buildings we observed on the tour, which all have white or tan exteriors.

The government looks after the citizens extremely well and the country’s extreme wealth from oil, gas and other exports is well invested in infrastructure and citizen welfare. On attaining 23 years of age, each citizen is provided a free building plot of approximately 6,000 square feet. The only cost is purchasing the title deed and building a home, which costs about US $150,000. In addition, education, medical care and prescription drugs are all free. The government is actively recruiting potential students to attend foreign universities on full scholarships.

Another observation is the cleanliness of the city, with our guide advising they are the 2nd cleanest city in the world behind Singapore. Street cleaners are out in force daily, even before morning prayers.

An impressive building both inside and outside, I believe it is superior to Dubai, not not Abu Dhabi, which was simply huge and spectacular.

On arrival, the ladies had to get kitted out in accordance with local customs, to enter the Mosque.

Judi and our table mate Christine all wrapped up in accordance with local customs.

The following photographs are a selection of those taken inside the Mosque. 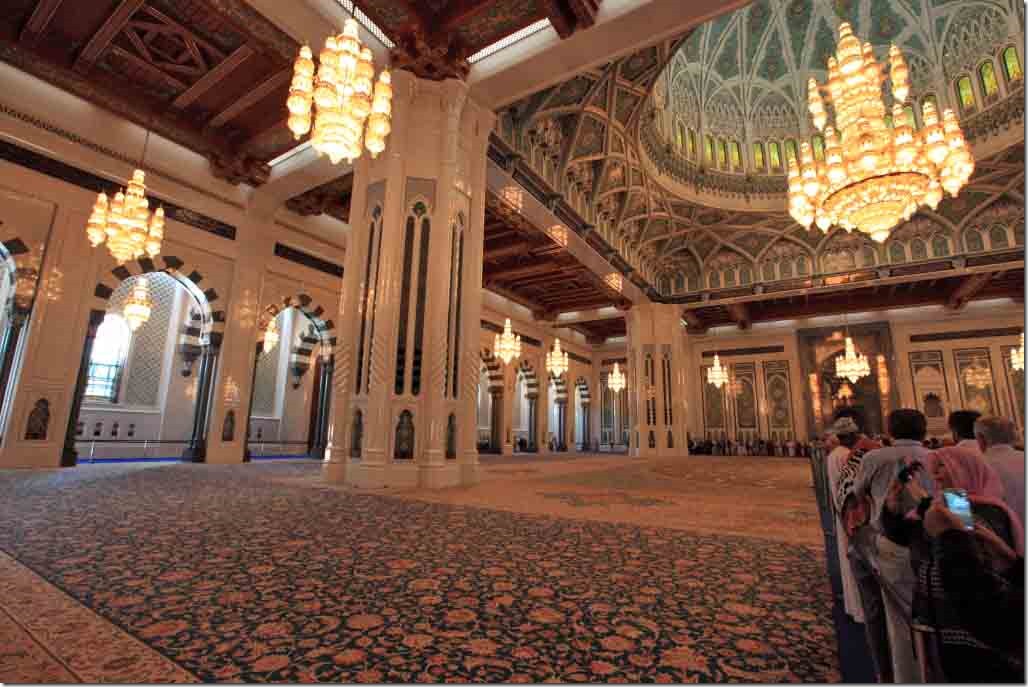 Inside of the male prayer hall from the entrance doors 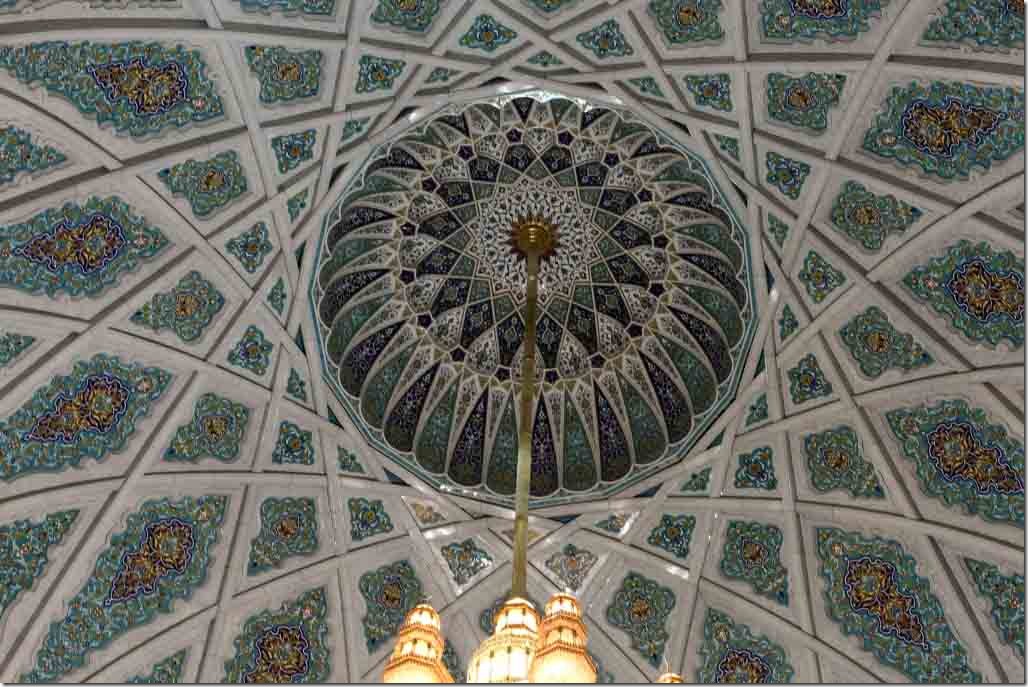 Tiling on the inside of the dome

Main chandelier and dome in the men’s prayer hall

Iman’s pulpit which points to Mecca 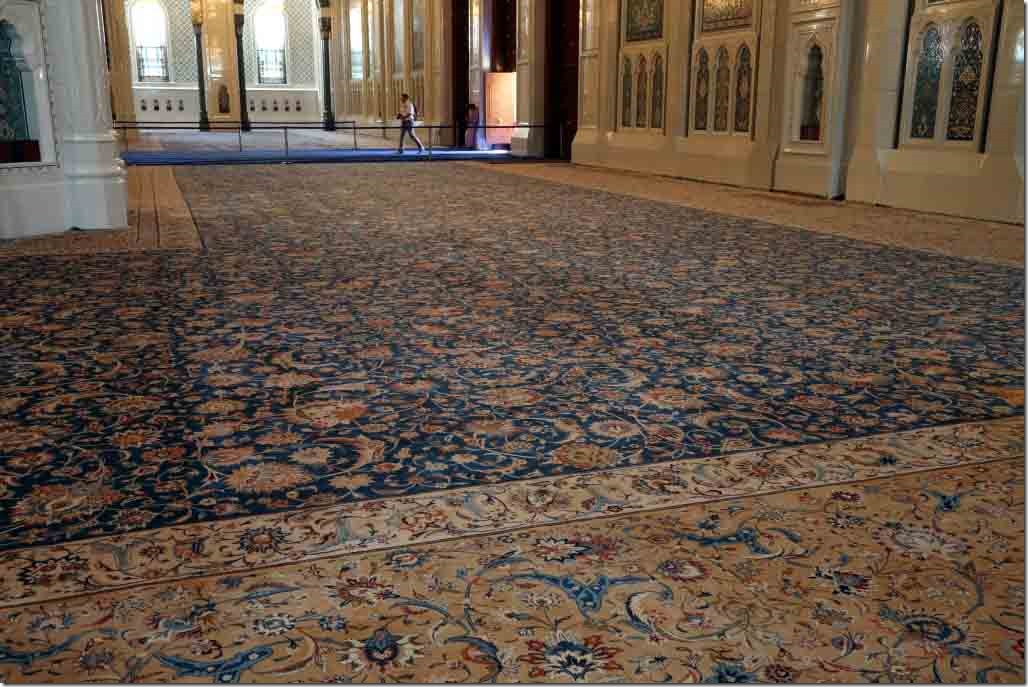 The huge carpet that covers the entire floor

Intricate carving on the outside of the doors 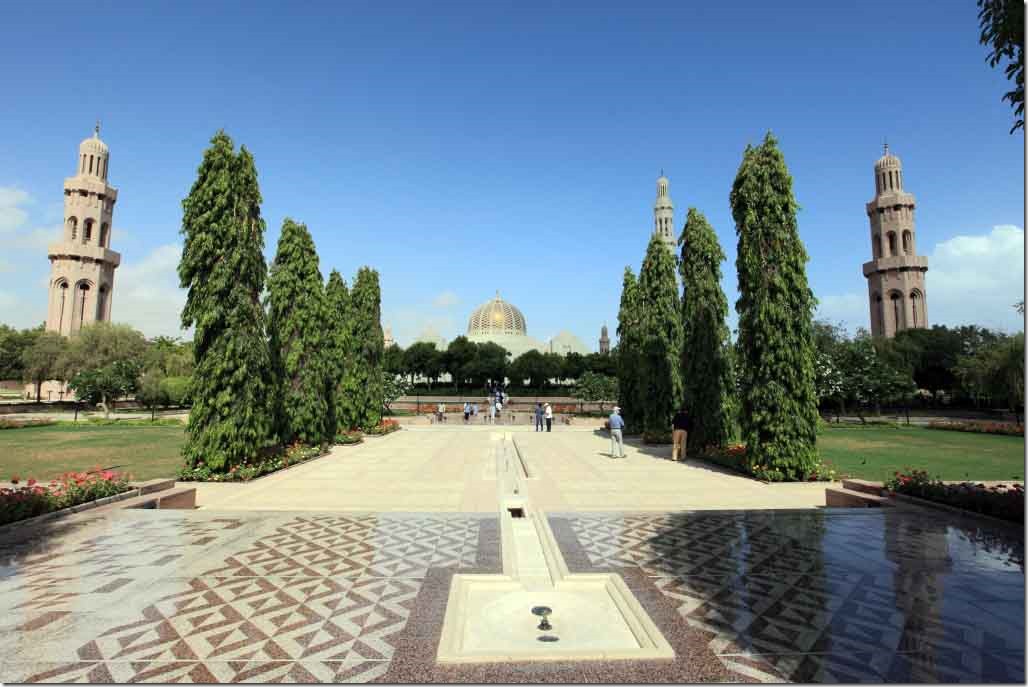 View of the Grand Mosque as we departed for the bus.

On return to the bus we headed back to Old Muscat for a free 45 minutes of the dreaded shopping at the local Souq. Judi and I walked through the Souq just looking at what was on offer, as we had no intension of making any purchases. Basically, our suitcases are still at maximum weight for the return flights and as far as I’m concerned it is the same junk we will see in every port, only the name changes.

Looking into the Souq from close to the entrance

They even have kid’s replica football strips, which most likely are fakes

Main street in Old Muscat from the Souq, note the constant procession of tour buses from the ship

Sea Princess and harbour from the Souq

After the Souq our next stop was at the Muscat Museum, but the time was restricted to about 15 to 20 minutes. This literally only permitted a very quick walk around the exhibits, as we could easily have spent a few hours reading all the information included at each exhibit. No photography was permitted. The exhibits were arranged in pods – weapons, jewellery, clothing, etc. From the exit we circled around the building where they created a replica of an early settlement.

Our final stop is at one of the Royal Palaces, which is located in a complex with other Government buildings.

Royal Palace, which is the only building we noted that wasn’t white or tan

This concluded our tour of Muscat, so on re-boarding the bus we headed back to the ship. Judi and I thoroughly enjoyed the tour and we find Muscat and Oman to be vastly superior to the glitz and largesse of Dubai. The Government is obviously flush with money, but they are using it wisely for the benefit of the country and their citizens. We would definitely be interested in a return to further explore the country.