Sitting at the top of the Gulf of Aqaba we are surrounded by four counties in our vicinity – Egypt, Israel, Jordan and Saudi Arabia. While navigating up the Gulf of Aqaba we had Egypt to Port and Saudi Arabia to Stbd, but at the head of the inlet, Israel has a very small coastline comprising the city of Elat and Jordan has a few miles of coastline with the city of Aqaba, our current port of call. The difference in cleanliness is significant, guess which city is the cleanest.

Although posted in the Princess Patter that we maintained NW’ly course throughout the night, Sea Princess actually maintained NE’ly courses through the Gulf of Aqaba towards the port of Aqaba, which lies at the head of the inlet. Sea Princess picked up the pilot shortly before 06:00 and was berthed alongside a cargo wharf by 07:00.

Aqaba is a coastal city at the North end of the Red Sea and is Jordan’s only port. With a population of about 100,000 it is Jordan’s 4th largest city and is the capital of Aqaba Governorate, a duty free region. It is a major tourist destination due to the warm waters and rich marine life, providing extensive opportunities for diving.

First populated in 4,000 BC due to its strategic location at the junction of trading routes between Africa and Asia, it reached its peak during Roman times, when a long road headed South through Amman terminating at Aqaba. In Aqaba, the Amman road then connected to another road leading down to Egypt. In 106 AD Aqaba was a major Roman port, which was named Aela. The city remained as a Christian settlement for many hundreds of years until the Islamic conquests. In 1187 Aqaba was recaptured for Muslim rule by Saladin, with the Mamluks assuming control in 1250 and remaining in power until their decline in the early 16th century, when control reverted to the Ottoman Empire. Aqaba declined to a simple fishing village under Ottoman rule.

It remained under the Ottoman Empire until the Great War, when their forces withdrew after the Battle of Aqaba, with Lawrence of Arabia and Sharif Hussein forces winning the battle and establishing the region as the Kingdom of Hejaz under Prince Faisal. This was an important victory, which opened supply lines for the British and Egyptian troops and eliminated a risk to the Suez Canal. In 1925, Aqaba was ceded to the British Protectorate and in 1965 King Hussein traded land with Saudi Arabia to gain an additional 7 miles of coastline south of the port.

The major activity today is tours to Petra, which take a full day, so minimal activities were planned by the cruise staff aboard the ship, so I won’t upload a copy of the Princess Patter. Our day started bright and early, as we eagerly awaited one of the highlights of the cruise, the UNESCO world heritage site of Petra.

Once awake, we headed out onto the balcony watching the arrival.

Approaching the Israel port of Elat, which is also located at the head of the Gulf of Aqaba, on a very hazy morning 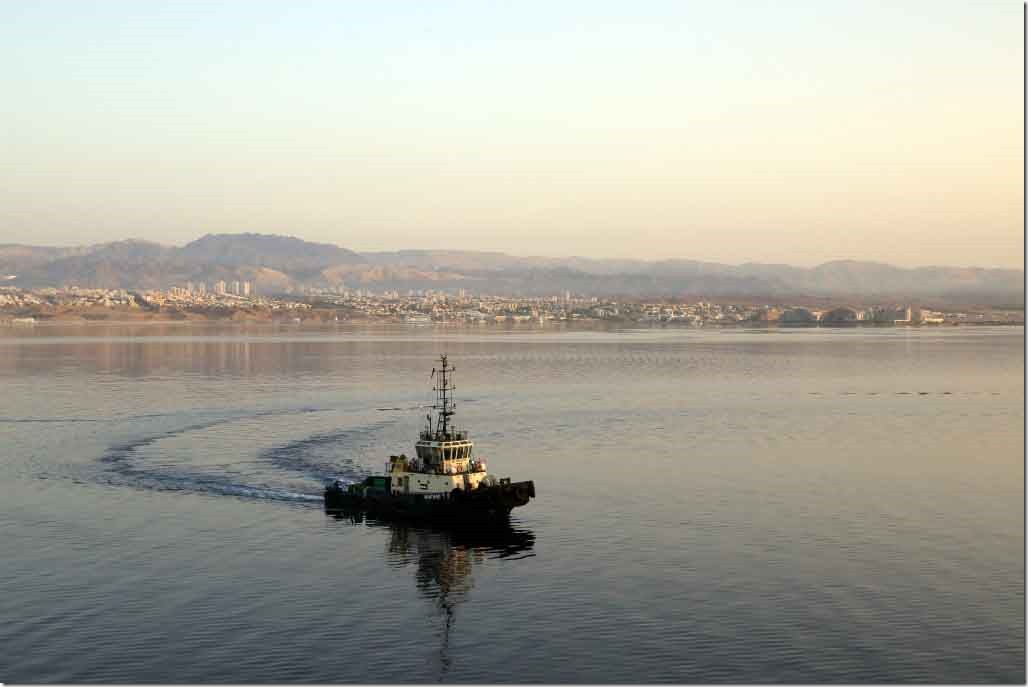 Tug boat coming to assist with the docking, although the ship can easily be docked without any assistance. The city of Elat in Israel is in the background 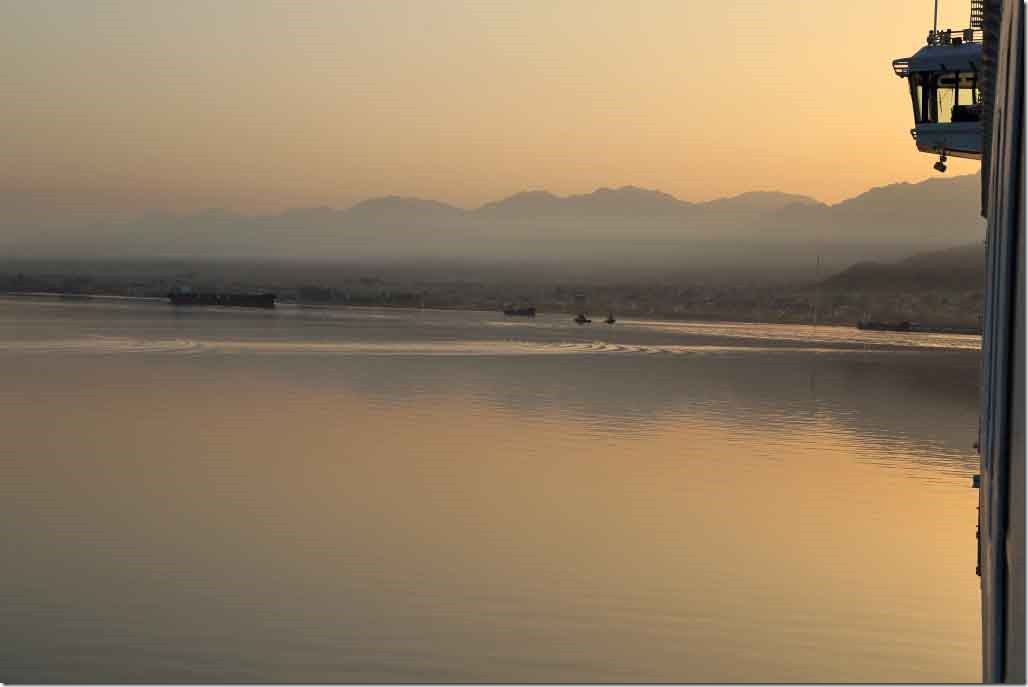 The port of Aqaba with a number of ships at anchor waiting to enter the port.

From this point we headed up to the buffet for a quick breakfast, before heading down to the Vista Lounge for the tour. This tour had over 20 full size buses or about 1,000 pax, but yet again the tour staff did an excellent job of organising and sequencing to minimise delays. They used both Princess Theatre (0730 report time) and Vista Lounge (0800 report time) and only called 2 buses at a time to minimise delays at the gangway and sequence the bus departure times. Our wait time in the lounge was a short 10 minutes.

On return, the organisation was again excellent, even the Hotel General Manager was on the dock with a number of his staff. They had a number of chilled water urns, with waiters meeting you as you got off the bus with cups of water. Another waiter had refreshing frozen cloths, which were frozen in a pile and you peeled one off. Very refreshing after the punishing heat of Petra. The Princess standards may have dropped recently, but the entire hotel department did an exceptional job with welcoming us back aboard.

Similar to many others we were beat, so retired to the cabin. Judi actually had a nana nap, until the Captain provided one of his regular pre-departure and navigational updates. Wide awake we decided to head up to the buffet for a quick dinner, where we met our tablemates Bruce & Viv, so sat with them and compared notes of the Petra tour over dinner.