What is Petra and why does UNESCO describe it as one of the most precious cultural properties in the world, and Smithsonian Magazine as one of the 28 places in the world to see before you die? I had completed many hours of research, but still nothing prepared me for the sights or the punishing heat and effort expended to see as much as possible, in the short time available. Read on for my account and photographs of the ancient city of Petra.

Entering the new town of Petra our bus navigated through the narrow streets descending into the valley, dropping us off at the hotel where lunch would be served between 14:00 and 16:00. The first thing we noted is nothing is flat. Where we exited the bus, it was downhill to the entrance, which more importantly, on the return, it is uphill. 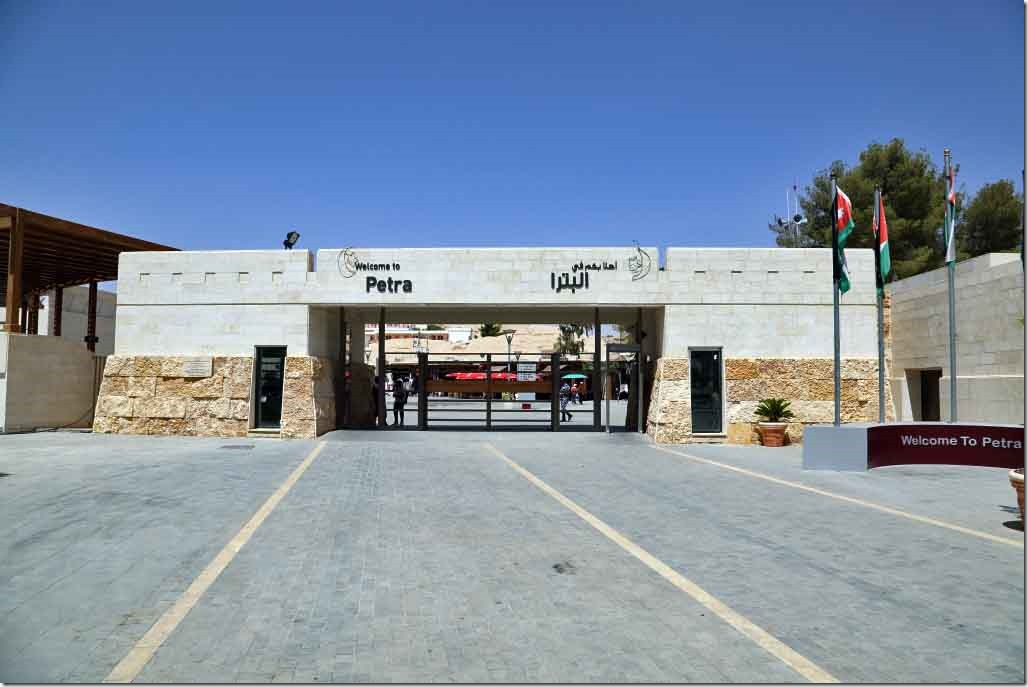 The entrance to the ancient city of Petra, which is a National Park

Established as early as 300BC as the capital city of the Nabataean people, who were an ancient Arab tribe from the Arabian Peninsula, who settled in Southern Jordan. Prior to expanding their sphere of influence to Jordan, they resided in NW Arabia, in a strategic area linking the China and India trade routes to the Mediterranean coastal cities and ports. Exposed to many cultures the Nabataean people quickly attained status as the region’s masters of trade and expanded their influence into Jordan, charging tolls and providing protection to the caravans laden with Arabian frankincense and myrrh, Indian spices and silks, and African ivory and animal hides.

As the Nabataean expanded into Jordan, Petra was established as the capital city, as it lay on important trade routes and was a natural fortress containing a perennial stream. The ancient city flourished as the Nabataean people were able to control the water supply, creating an artificial oasis and with dams, cisterns and water conduits they managed the flash floods, to provide a reliable water supply during periods of drought.

In 106 AD control of Petra was taken over by the Romans and it quickly went into decline. Earthquakes in 363 and 551 destroyed many buildings and the water supply resulting in the city being abandoned. The city was lost for hundreds of years until discovered by a Swiss traveller, Johann Ludwing Burckhardt in 1812. It became a UNESCO World Heritage Site in 1985.

Petra Entrance to the Siq

Once inside the main gate you enter a square with visitor centre, washrooms and various merchant stalls 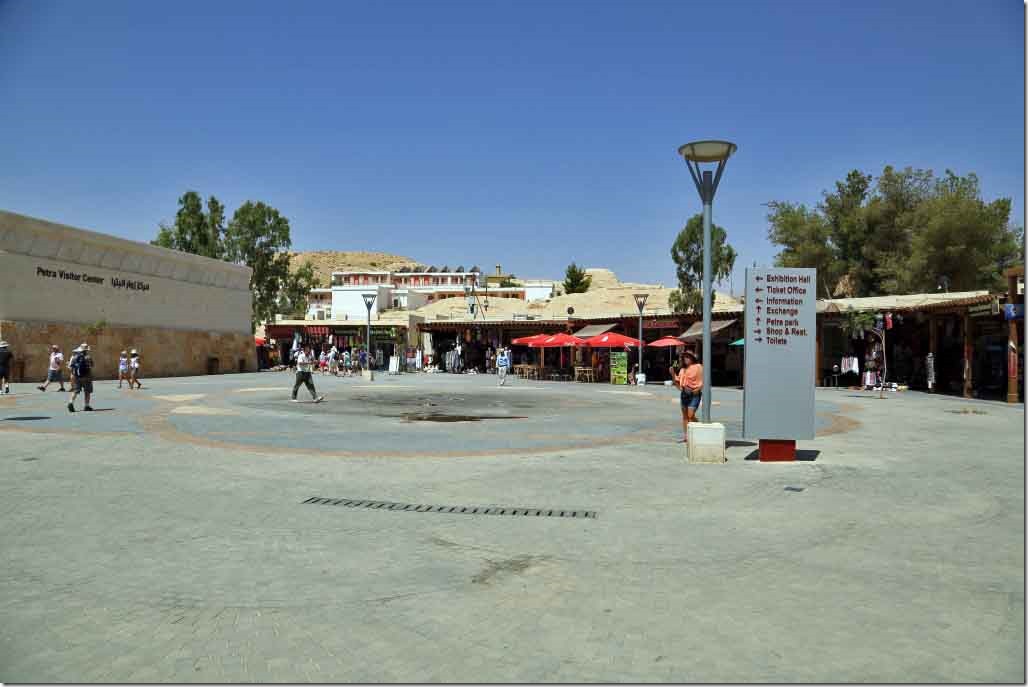 Inside the front gate

Bab as-Siq (Gateway to the Siq)

To access the ancient city you must walk passed the vendors and around the visitors centre before starting the long hike down to the canyon. Just after the entrance you have a set of stables where horse, donkey and carriage rides are available for a fee. The carriages take 2, but have minimal, if any suspension and over the rough terrain the ride looked bone jarring. Our guide advised the round trip cost of a carriage ride was US $30.

From the visitor centre to the start of the gravel section is the steepest, which means that on the return journey the steepest incline is at the end of the journey when you are probably exhausted and slightly dehydrated. Once passed the carriage and horse station the dust/gravel path is wide and slopes down gradually, with a separate path for the horses and carriages. This section is about 1/2 mile and passes a few spots of interest.

The Obelisk Tomb is located about half way down from the entrance to the Siq and is a monument to the marriage of styles between East and West. The Obelisk has Egyptian influence with the niche between them having a Graeco-Roman influence. The Triclinium is a chamber containing 3 benches, which is of Nabataean heritage and was the calibration of sacred feasts, which took place every year to honour the dead. 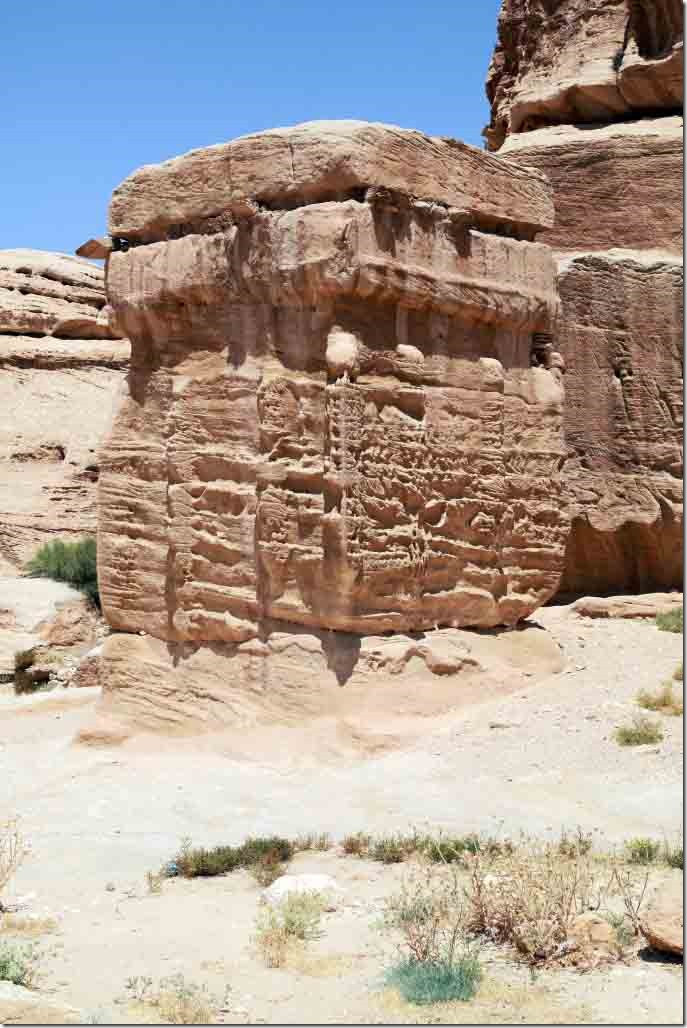 Large rock with intricate carvings opposite the Obelisk Tomb.

One of many similar carvings above the entrance of cave hewn out of the rocks.

The plaza at the end of the entrance section, which leads to the entrance to the Siq. The entrance to the Siq is passed the building to the left and is again initially steep with loose gravel, making it a challenge for the return journey. This area is part of the dam constructed by the Nabataean people to control and reroute the waters of Wadi Musa.

Having completed the Bab as-Siq you enter the Siq, a 3/4 mile narrow gorge that in places is less than 10 feet wide and winds through the rocks to the next major attraction, the Treasury Building. Unlike slot canyons, which are entirely shaped by water, the Siq is a natural geological fault, split apart by tectonic forces. Once formed it was later worn smooth at the lower levels by water. The walls stand between 300 and 600 feet in height. The entrance initially contained a large arch, but it collapsed following an earthquake in 1896.

Entrance to the Siq with fairly steep loose gravel 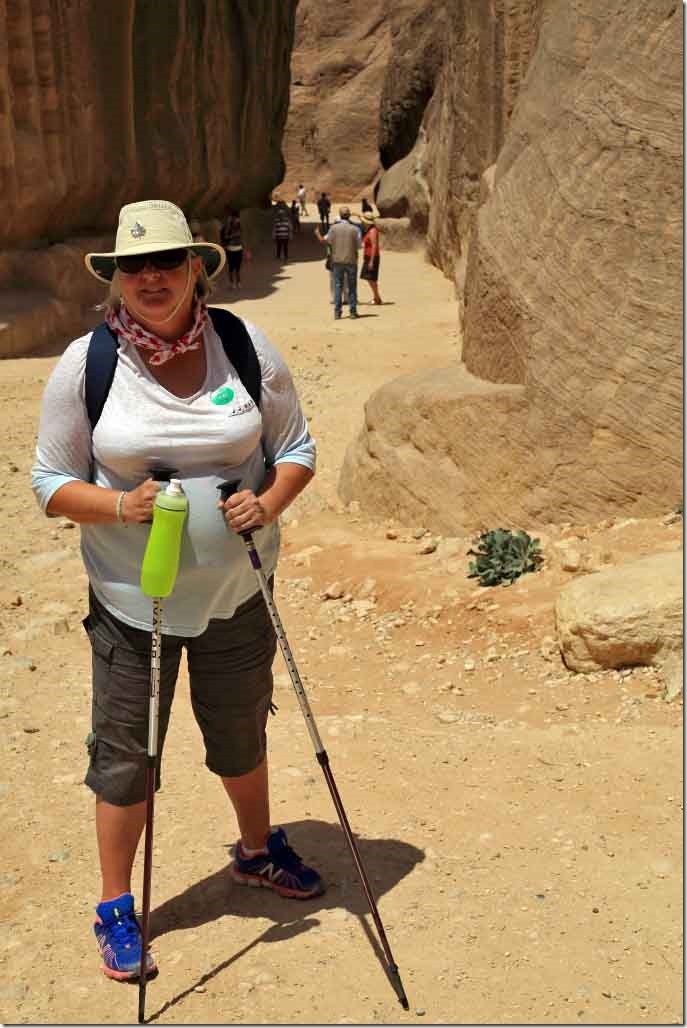 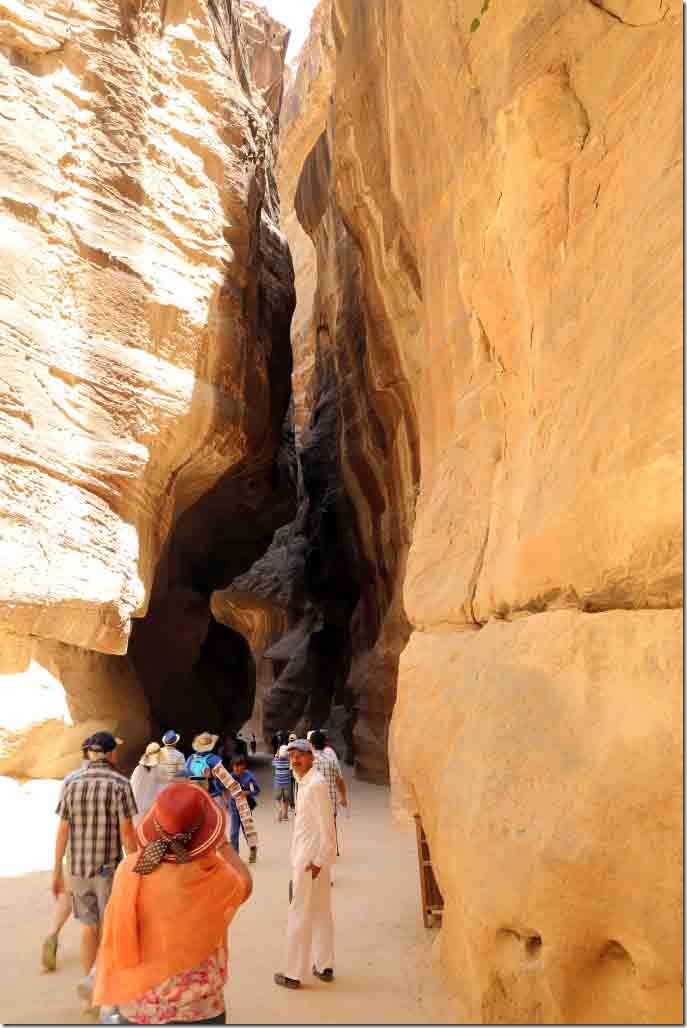 Entering the 2nd narrow section of the Siq

This photograph really highlights how the rock has been worn smooth over the years and the different colours throughout the rock.

Judi at the entrance to the final narrow section before reaching the Treasury Building.

The Siq opens into a large expanse of plaza and you face the most elaborate of all the buildings in the ancient lost city of Petra, which is the renowned Al-Khazneh, which translated means Treasury Building. As with all other buildings in Petra it was elaborately carved out of the sandstone cliff face.

Originally built as a mausoleum and crypt at the start of the 1st Century AD, the name derives from the legend that bandits and/or pirates hid their loot in the tall urn on the 2nd floor. Significant damage from bullets can be seen on the urn, as local folklore has Bedouin tribes trying to shoot open the urn to access the treasure. However, the urn was solid sandstone. Many of the architectural details have eroded in the 2,000 years, with the sculptures thought to be mythological figures associated with the after-life. On top, are four eagles who are thought to have carried away the souls, on the top level are dancing Amazons with double-axes and the entrance is flanked by statues of the twins Castor and Pollux.

Treasury Building with camel out front 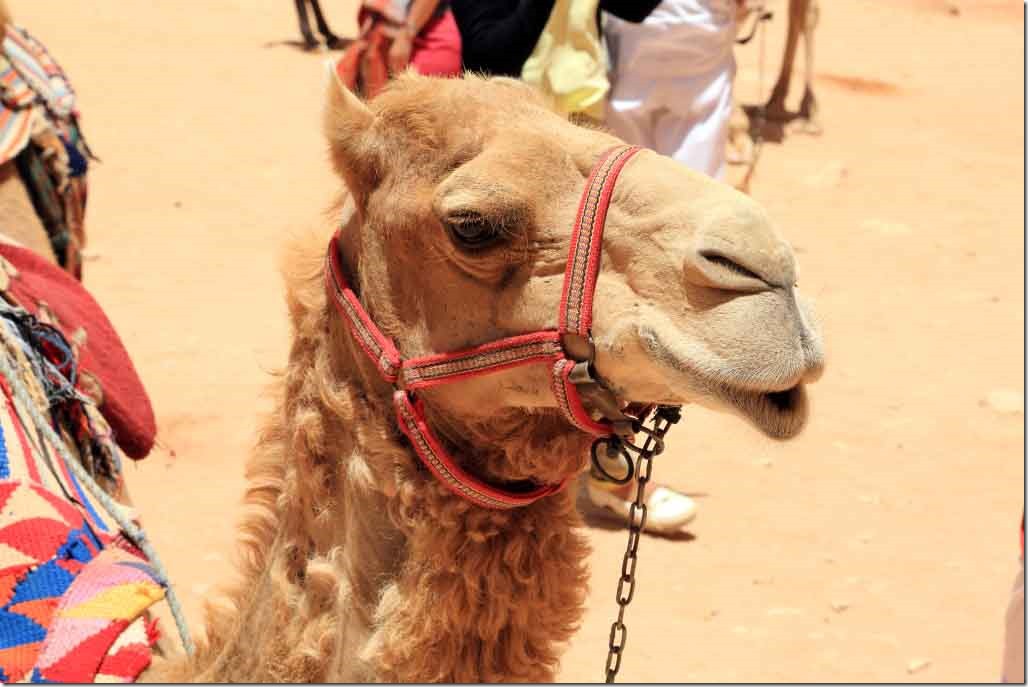 One of the many camels available for riding

Side view of the Treasury Building

As we arrived at the Treasury Building Plaza we met our table mates Bruce & Viv and Bob & Christine, who left on an earlier version of the tour. They were heading back, so Judi tagged along with them while I went exploring.

On departing the Treasury Building you continue downhill, but the path is much wider and very dusty. Along both sides of the rock face are intricate carvings, hence the aptly named Street of Facades. 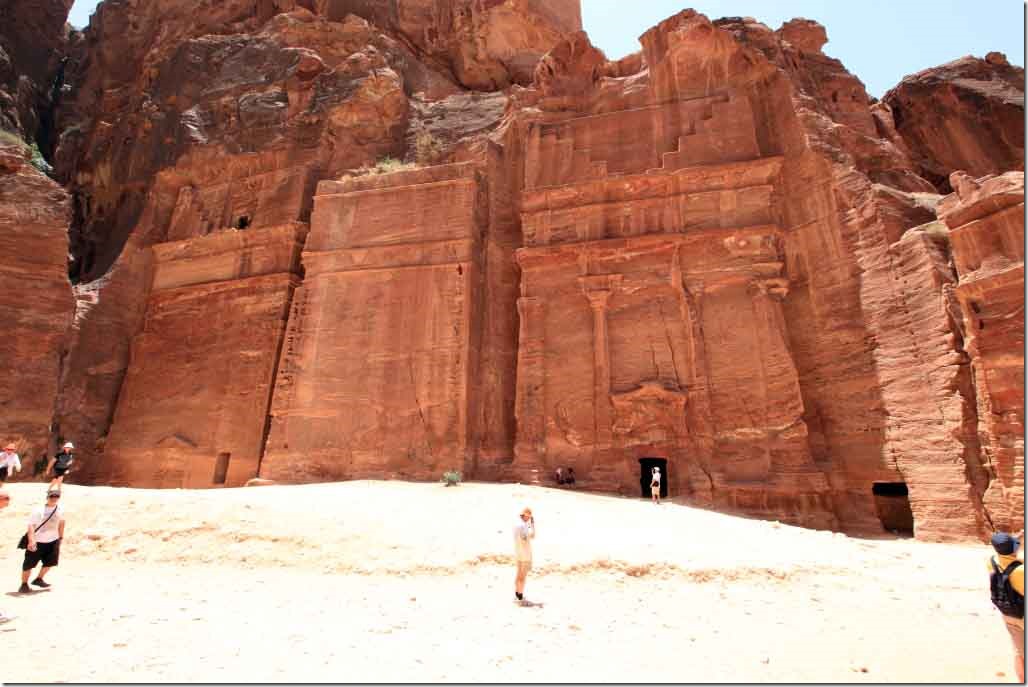 The Street of Facades contains rows of Nabataean tombs with once intricate carvings. It leads to the next attraction, which is the Theatre.

This looks like a Roman Amphitheatre, but was built by the Nabataeans in the 1st Century AD. It is almost entirely carved into solid rock and initially it housed 3,000 people, but was later expanded to a capacity of over 7,000 people. 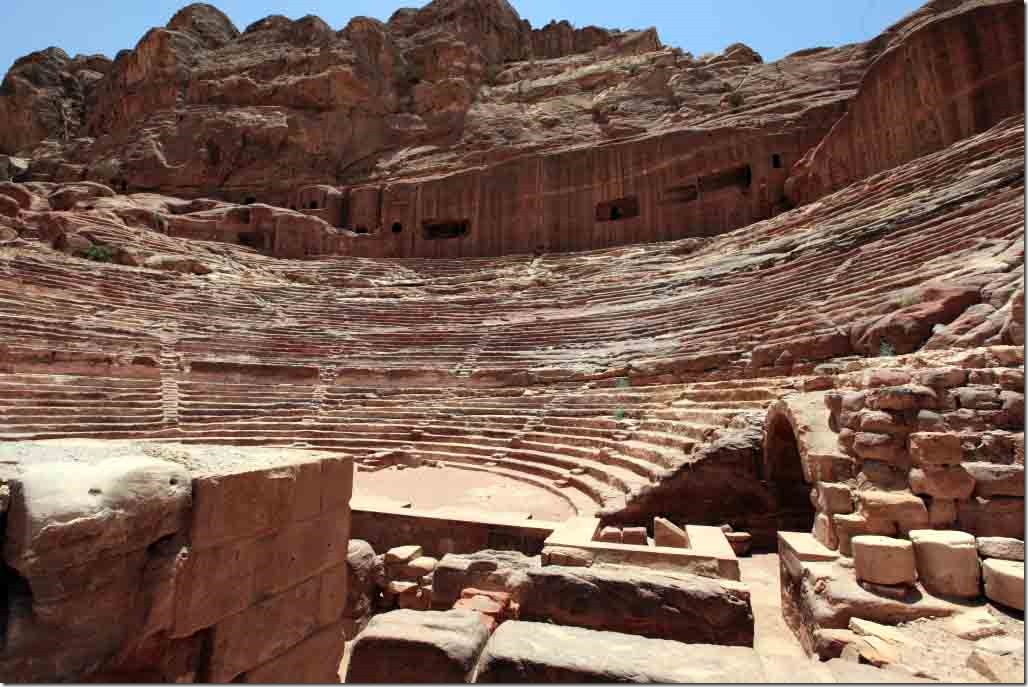 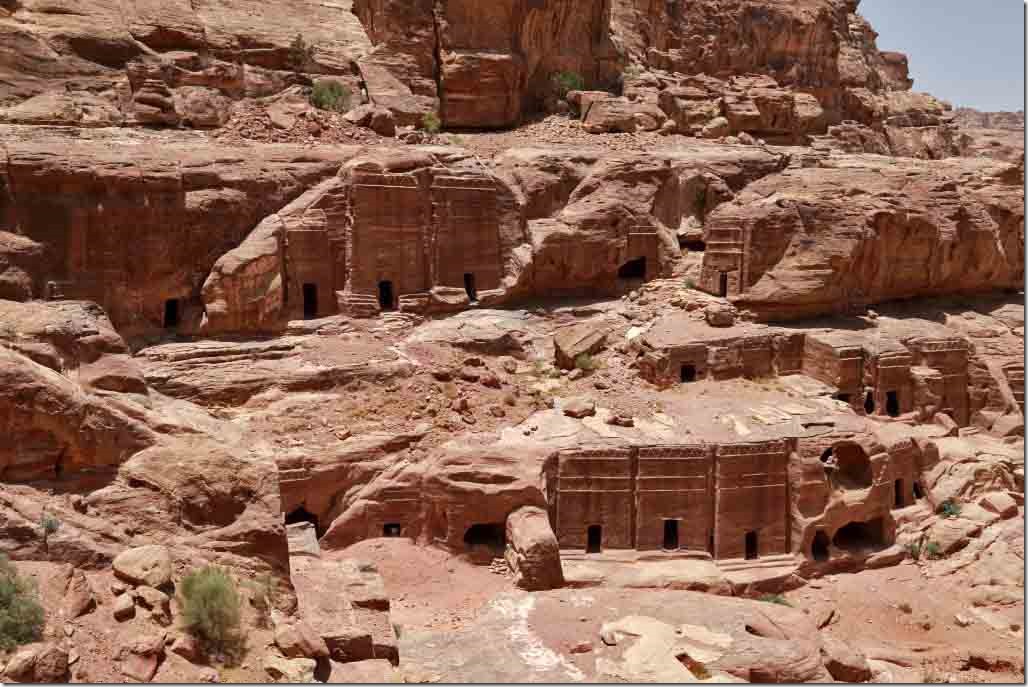 Triclinium Tombs adjacent to the Theatre

Just prior to the Theatre I spotted a set of stairs leading up a canyon, so off I went exploring. They started off fairly steep, but did ease off. Regardless, it was an exhausting climb up the canyon in the heat, gaining an altitude of about a couple hundred feet. The view was definitely worth the effort.

It was a tough climb, especially in the heat, but with a number of stops for water I made it to the top. 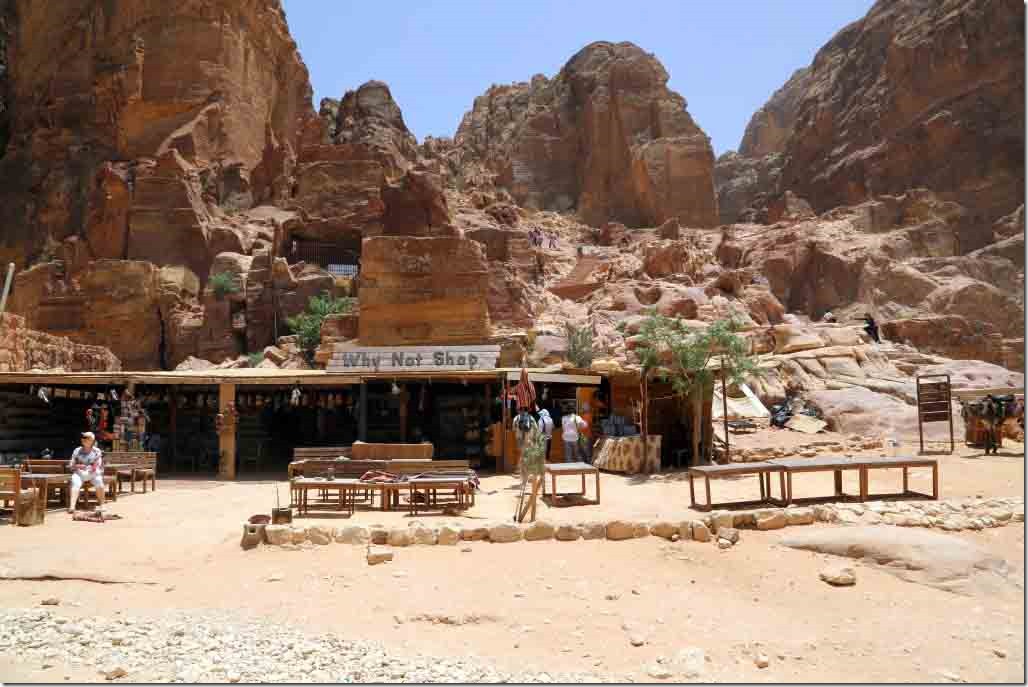 Stairs behind the store are where I climbed up to the top of the canyon between the two peaks in the background.

The road passed the Theatre has numerous Royal Tombs carved into the cliffs, which before weather erosion rivalled the Treasury Building in both grandeur and beauty. The individual tombs house numerous Nabataean dignitaries. 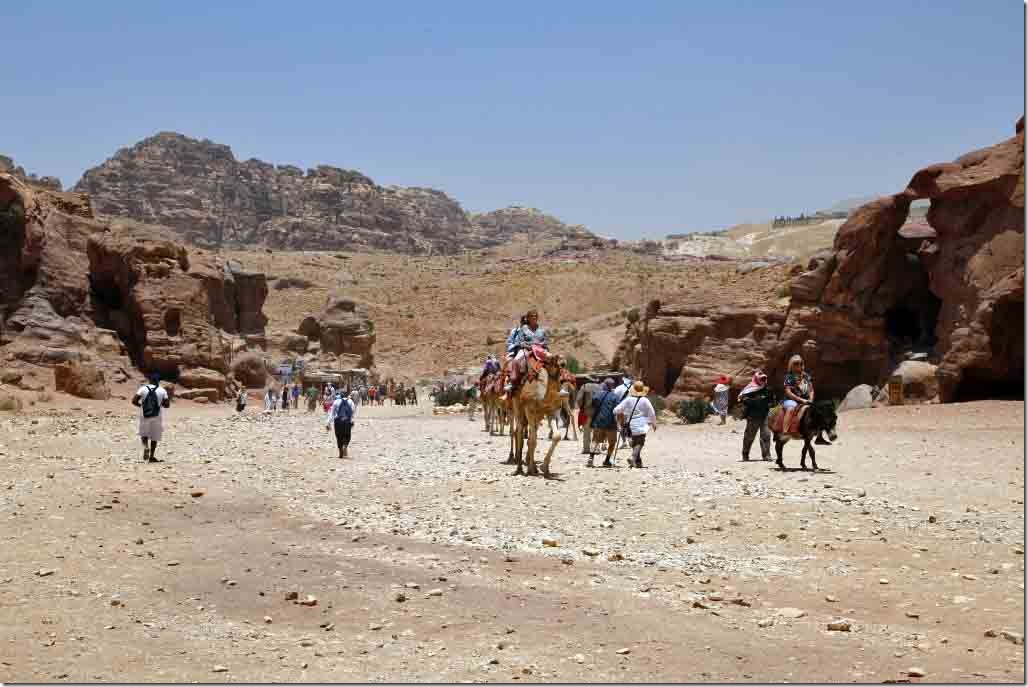 Road down passed the Theatre with the Royal Tombs on the right side. 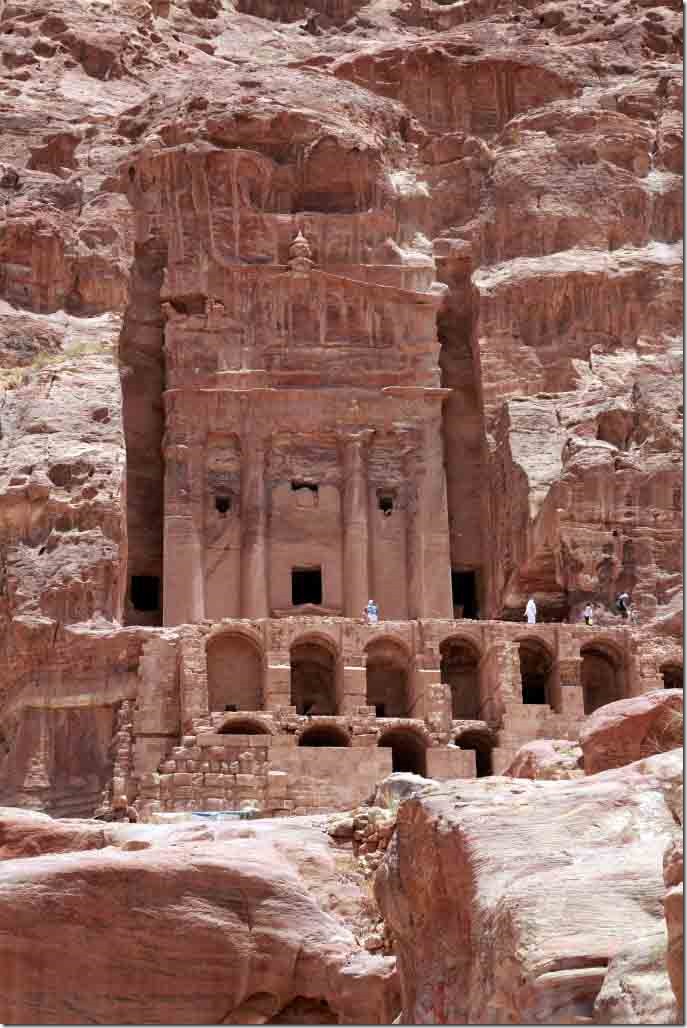 The Urn Tomb, which is the largest of the Royal Tombs. Believed to have been carved about 70 AD, it was altered in the fifth century as it was deconsecrated to serve as a Byzantine Church. Above the doorway are three chambers, with stone thought to be a depiction of the person buried inside the central chamber.

Another of the Royal Tombs 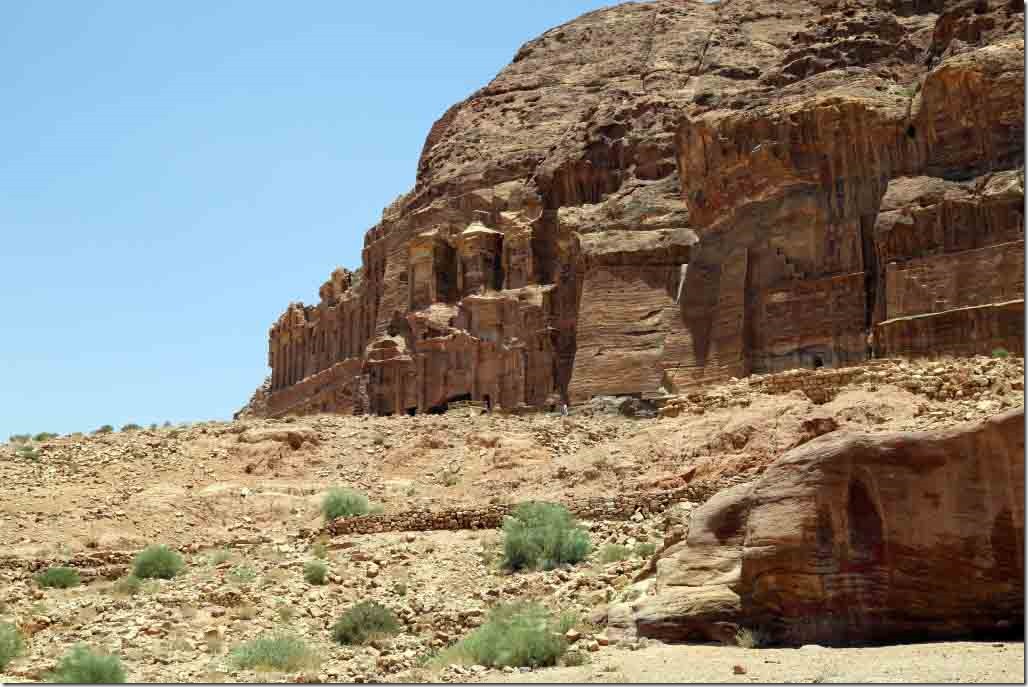 Time was marching on and I didn’t want Judi to be alone at the entrance too long, so I ventured onto the ridge above the Colonnaded Street just to view the scenery before heading back. If I did it again, I would skip the climb up the gorge and head along the Colonnaded Street and try to make the Monastery, which was probably another mile. Coming down hill was easy, but the entire journey back to the entrance was uphill and in early to mid afternoon it was the hottest part of the day. I consumed about 3 litres of water during the hike and was still partially dehydrated on return to the entrance.

Getting back to the entrance wasn’t the end of the hike, as we had to continue uphill to the hotel for lunch and boarding the bus. In summary, this was a brilliant day, which I thoroughly enjoyed, but in the heat and return up hill it was an extremely punishing day. If you don’t have sufficient fitness and/or stamina, I suggest doing what Judi did and only going to the Treasury Building.

Apologies for the extreme length, I should have split it into 2 posts, but Petra is just such a special place to visit.