Sea Princess arrived in Venice at 14:00 and today we planned to discover the attractions of Venice on our own. To be more precise, we planned to visit Doge’s Palace, take a cruise on the Grand Canal and if time, visit St. Marks’s Square and Basilica. We were heading into town with friends Bruce and Viv, so once we were all ready we set off on the hike to the Princess shuttle. Just missed the 15:00 shuttle, which departed just as we arrived, but we got the next one, which dropped us off next to Doge’s Palace about 15:30.

Wandering along the Giudecca Canal we stopped for a few photo opportunities as we crossed the canals that head into the city of Venice. 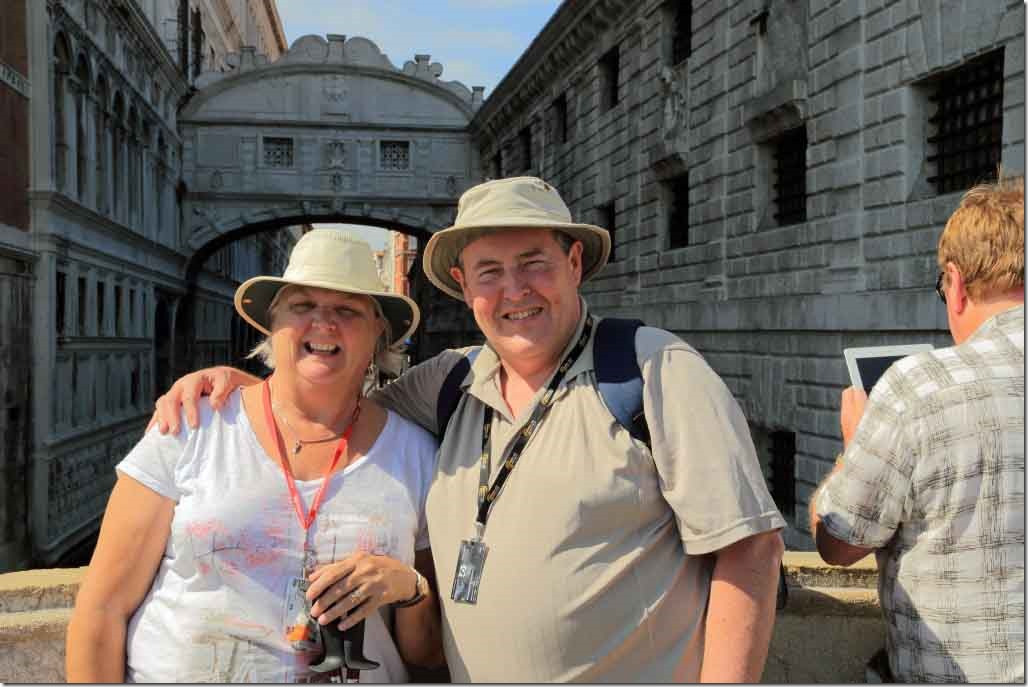 Andy and Judi at the bridge over the canal between Doge’s Palace and the prison, with the Bridge of Sighs in the background.

Bruce and Viv with the Bridge of Sighs in the background

Canal between the Doge’s Palace and Prison, which are connected by the Bridge of Sighs. This was named for the sighs from prisoners as they moved across the canal from the Palace to the prison. Bruce and Viv had already toured the Doge’s Palace, so they went for a general wander while Judi and I tackled the massive palace.

Built in Venetian Gothic style, this is one of the primary landmarks in Venice. The palace was the primary residence for the Doge of Venice, who was the supreme authority of the Republic of Venice. In addition to the Doge’s residence the Palace contained the chambers for the Council. Converted to a museum in 1923, it is visited by about 1.5 million visitors per annum. 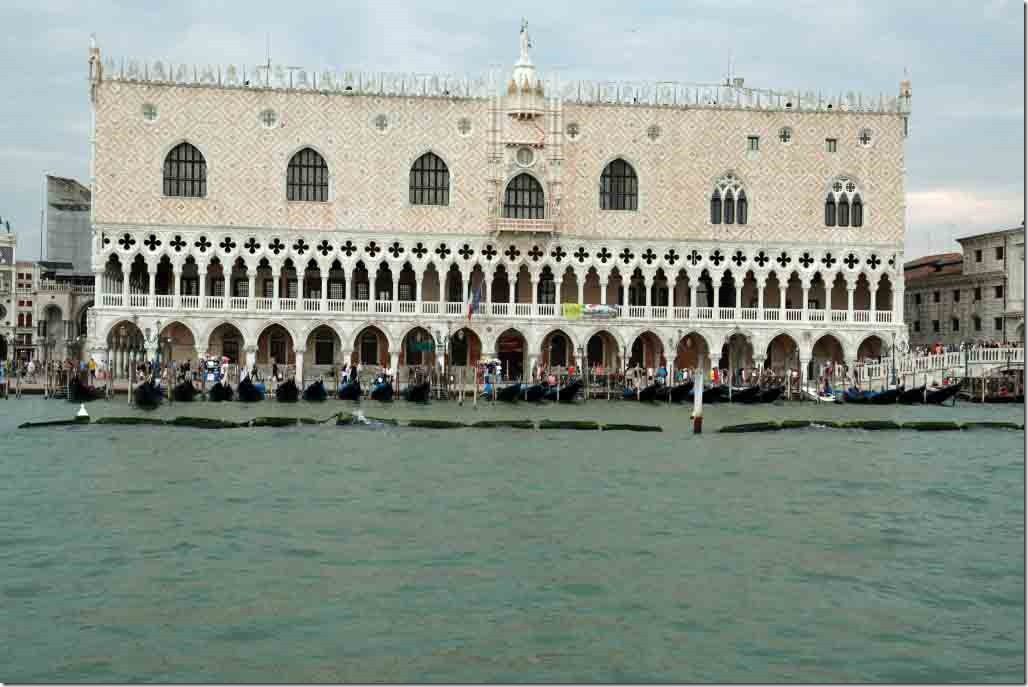 In 810 AD the then Doge decreed the seat of government should move from Malamocco Island to the vicinity of the Rialta Bridge. An initial palace was constructed, but it was destroyed by fire in the 10th Century. Construction of the current palace started in 1340, focussing mostly on the lagoon side. In 1424 the building was expanded to include law courts, but in 1483 a massive fire destroyed most of the lagoon side, which housed the Doge’s apartments. Numerous rebuildings and subsequent fires over the next 300 years led to the development of the current structure, with the Bridge of Sighs dating from the 16th Century. The palace’s role diminished when Venice was occupied by Napoleon, Austria and eventually Italy.

On entering the palace you enter the courtyard, which is bounded by the junction between the palace and St Mark’s Basilica, which was the Doge’s private chapel.

North wall and Grand Staircase which separates the Palace from St Mark’s Basilica. In 1485 the Grand Council decreed the palace required a ceremonial staircase within the courtyard. The staircase provides a straight approach from the Piazza to the first floor and area of the Doge’s apartments. In 1567 two large statues were built of Mars and Neptune, which represent Venice’s power by land or sea.

South Colonnade with intricate carving on the stone face

On the first floor we walked through some interesting displays outlining the Italian Military battles of WWI. This is history that neither of us had covered and we found it rather interesting. The 2nd floor had an exhibition, which required a special ticket, so we bypassed that and headed to the top floor. Wow! just spectacular, as we entered the Doge’s apartments. No shortage of gold around here. 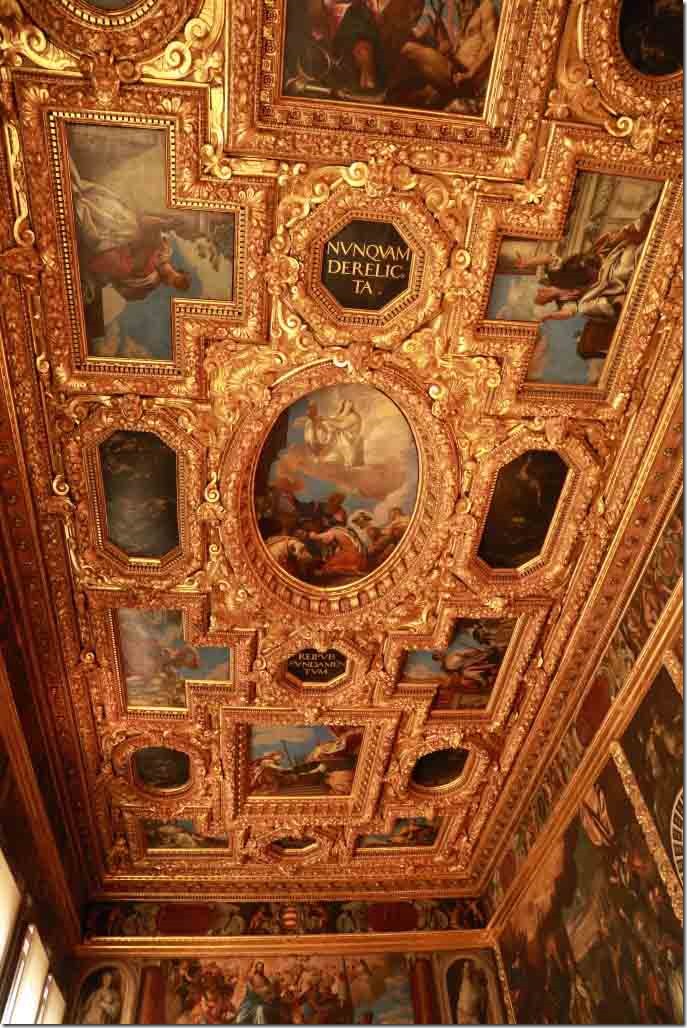 Samples of a ceiling from a couple of the rooms in the Doge’s apartments. All ceilings were similar with the paintings and detailed gold frames.

This is a sample of the walls in one of the Council Chambers. 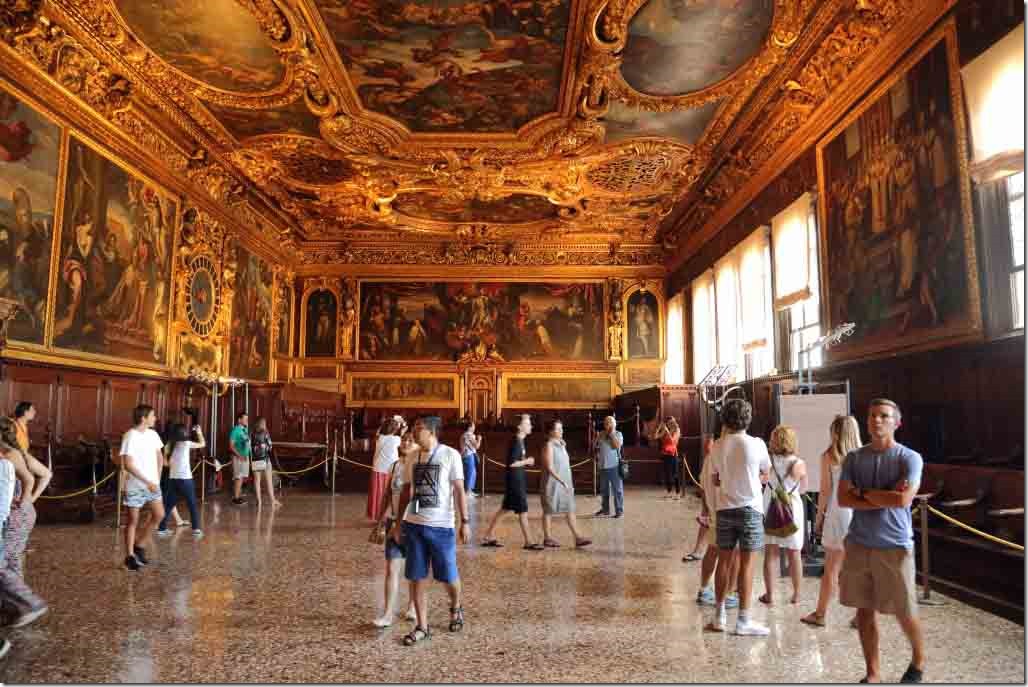 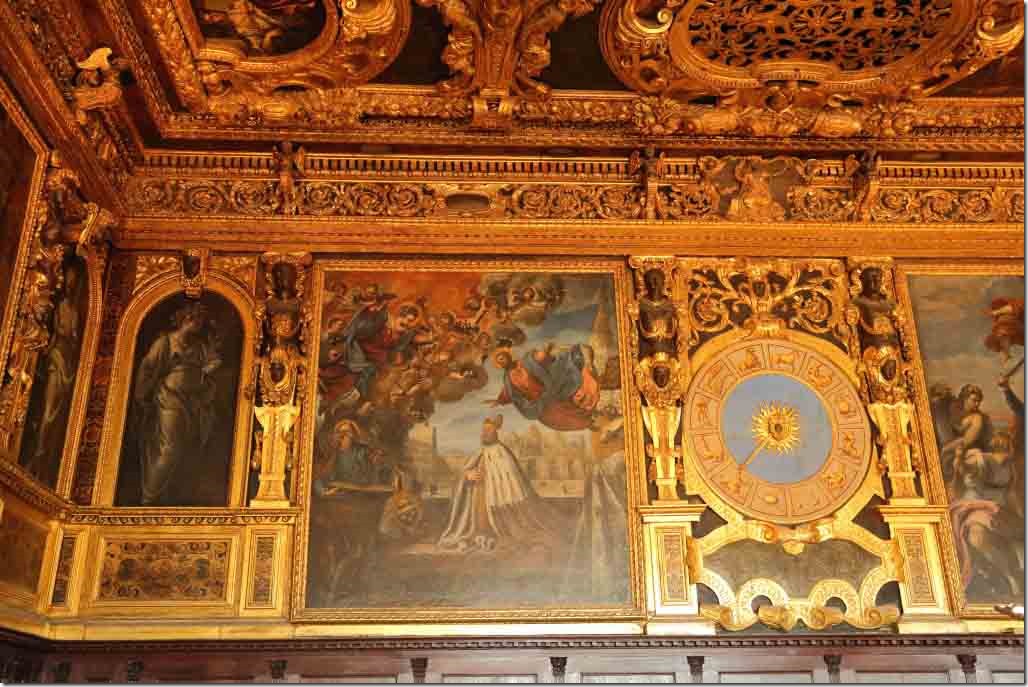 An example of the walls and ceiling from one of the rooms in the Dog’s apartments.

From the Doge’s Apartments and Council Rooms we headed into the Armoury Museum, which displayed the various weapons and armour used throughout the ages.

View from the front corner windows in the armoury. Looking down the Giudecca Canal with Lido Island in the background.

Next up was a walk across the Bridge of Sighs towards the prison, which is located across the canal.

The last view afforded to prisoners as the went from the Palace to confinement in the prison.

Dropping down a floor we entered the Ballroom. 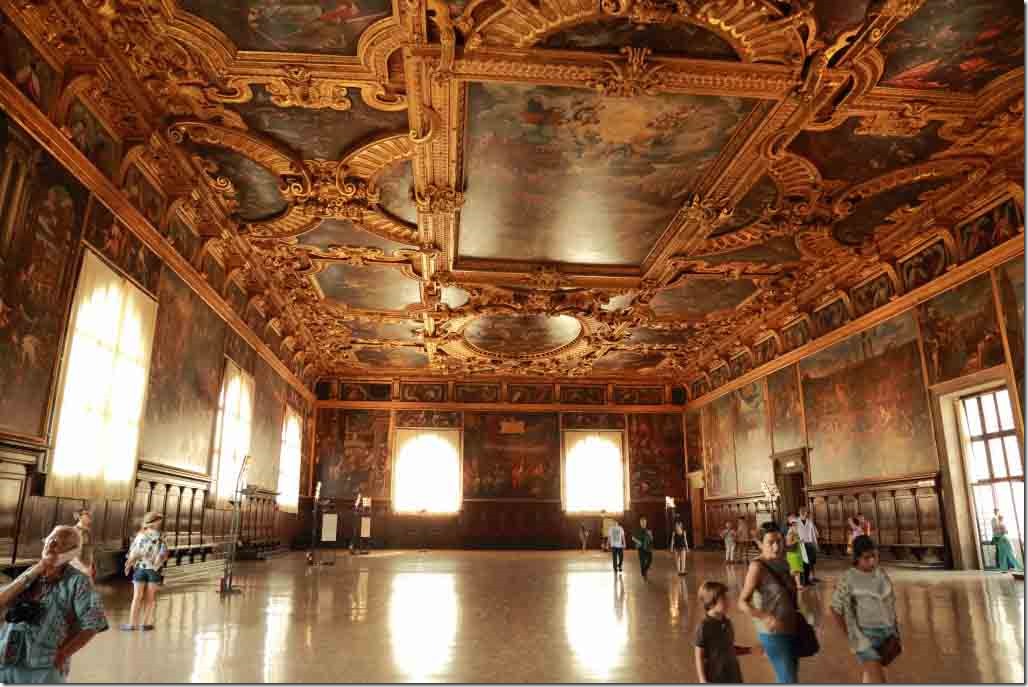 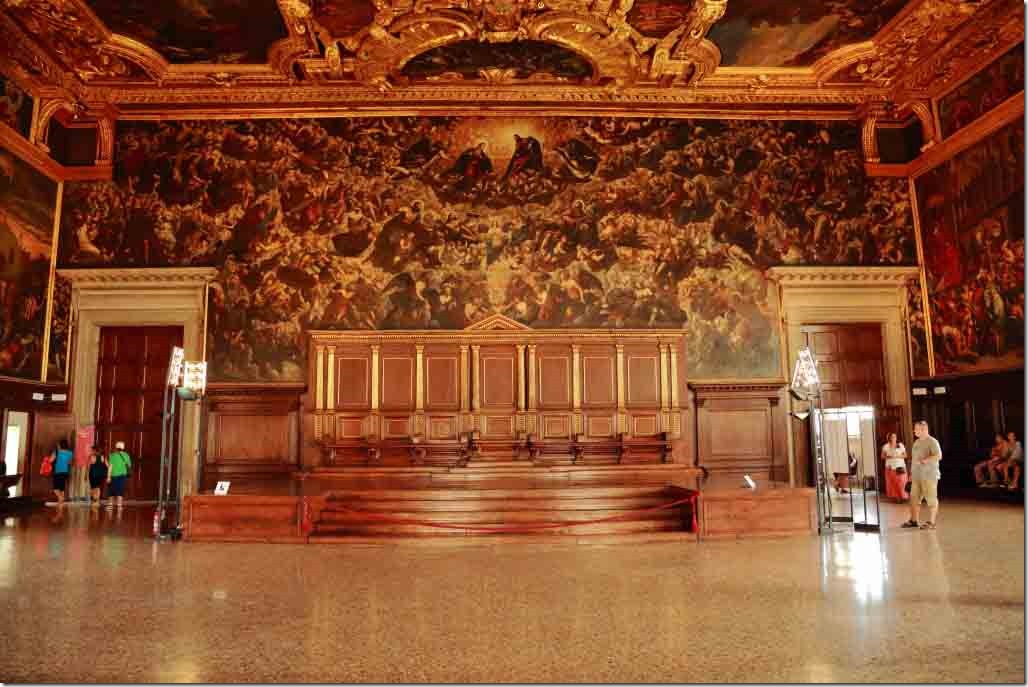 This concluded our tour of the Doge’s Palace, as we returned to the Courtyard making our way to the exit. 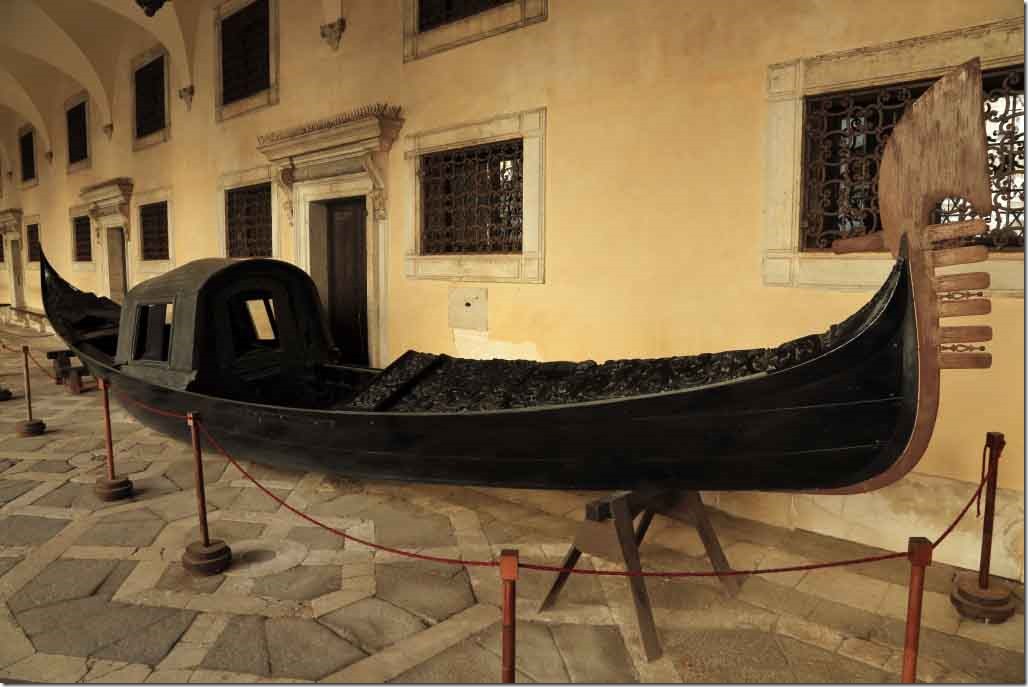 We spent about 2 hours in Doge’s Palace, but that was only time for a quick whirlwind tour. To do it properly and actually take the time to absorb the information and history, this building could easily take a full day. In reality, it whet our appetite for a return trip in the future.