After the tour of the Doge’s Palace we met up with Bruce and Viv and decided a Grand Canal cruise was next on the agenda. We visited a couple of ticket booths, but the 18:30, which was the last guided cruise of the day was fully booked. No problem, we headed to the Aqua Bus, which runs regular service all along the Grand Canal.

The Venice Aqua bus is an amazing system that almost resembles the frequency of buses found in downtown London. However, as we expected, it is good basic marine transportation, with no frills or commentary. When the bus arrived hoards of people got off, so we thought it would be empty. Nope, far from the truth. It was standing room only, fortunately a perfect gentleman gave up his seat for Judi. I stood in amongst the crush of people and being taller than the side windows, saw nothing but water and other boats. After a couple of stops Bruce & Viv scored a couple of seats at the rear and at the next stop the 2 in front of them came available, which they saved for Judi and I. Great view, but not the best for photographs, as I could only set the camera, stick it out the window and take blind shots. Some actually turned out OK.

First blind shot out the window with another bus opposing. Approaching the Rialta Bridge.

Another blind shot out the window, capturing the buildings adjacent to the Rialta Bridge, which is currently being renovated.

Immediately on passing under the Rialta Bridge we passed this Piazza, lined with cafes and a dock for gondola rides. 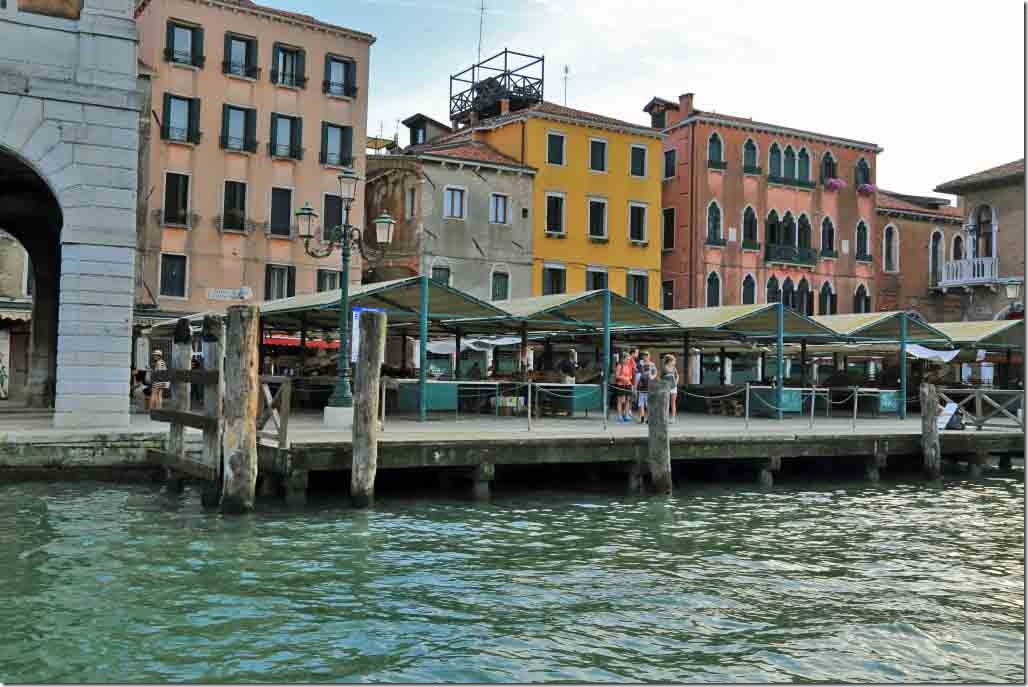 Continuing up the Grand Canal the next point of interest was this market with a number of covered stalls selling what appeared to be flowers, plants and possibly vegetables.

Venice Gallery of Modern Art with orange LED strips leading up the front of the building.

One of the smaller canals leading from the Grand Canal into the heart of Venice.

Another small canal leading off the Grand Canal as we approached the end of the canal.

When we reached the final stop and everybody got off, we and a few others headed to the seats at the stern for the return journey. Unfortunately the tickets were only 1 way, so we had to get off and purchase a return fare, catching the next boat. When the next boat arrived we were first in the queue, so headed to the stern for the seats out in the open. 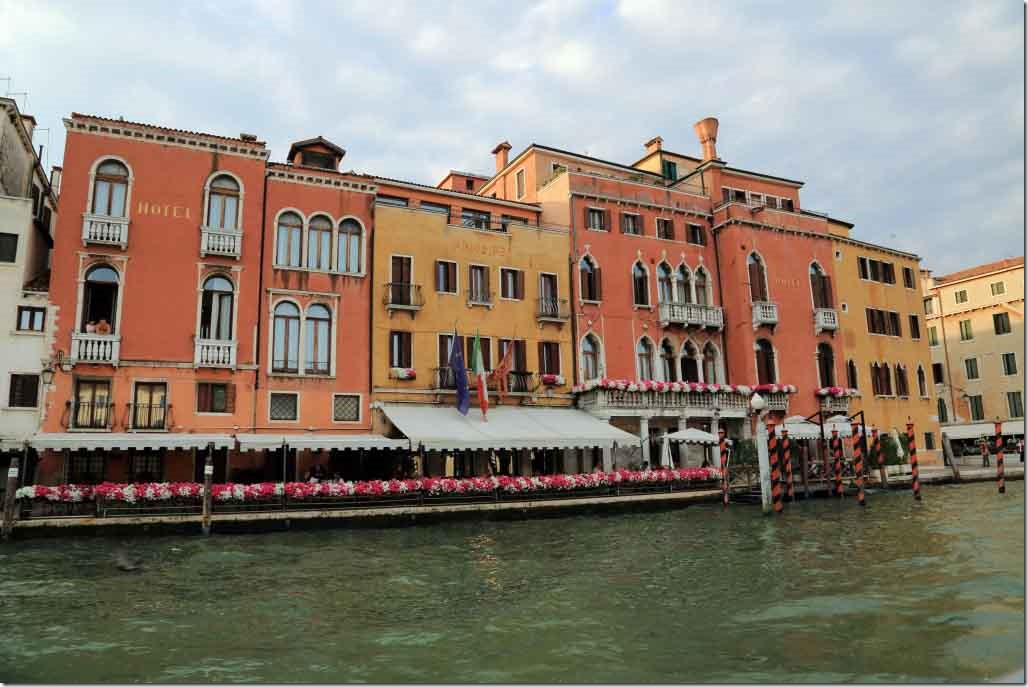 Nice display of flowers along the restaurant’s patio. 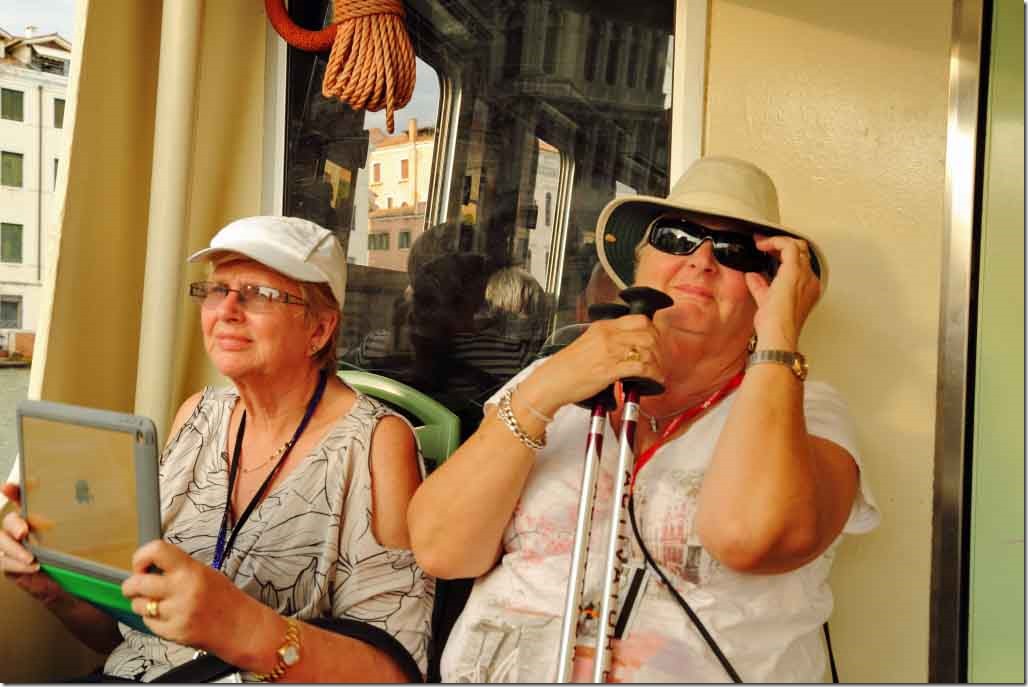 Judi and Viv on the seat at the back of the boat.

Venice Casino on the bank of the Grand Casino. Rumour aboard ship has one of the crew members making a reasonable winning during their shore leave.

Looking back up the Grand Canal from the aft end of the boat.

I suggest this photograph highlights the best of Venice with a small restaurant on the canal banks beside the Rialta Bridge, and a gondola meandering slowly along the shore.

Looking aft having just passed under the Rialta Bridge, with half the bridge being renovated. 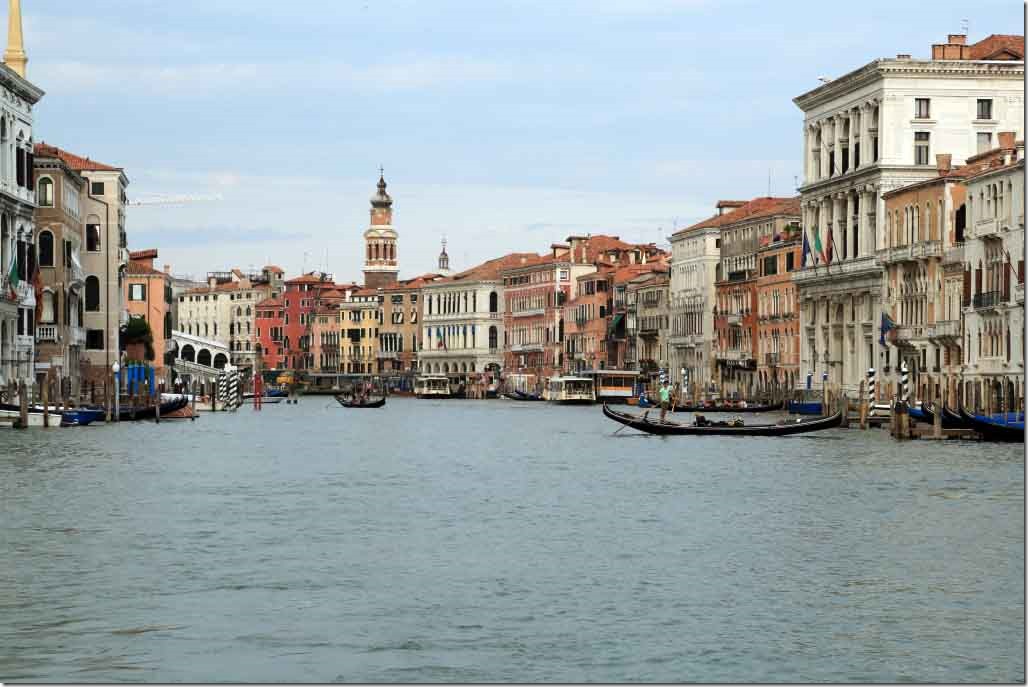 Looking aft while heading down the Grand Canal.

Another of the many small restaurants lining the banks of the Grand Canal.

Venice’s three main modes of transportation. The Aqua Bus and gondola heading up the Grand Canal and a water taxi heading down the canal. The taxis are expensive being about 10 times the cost of the bus. 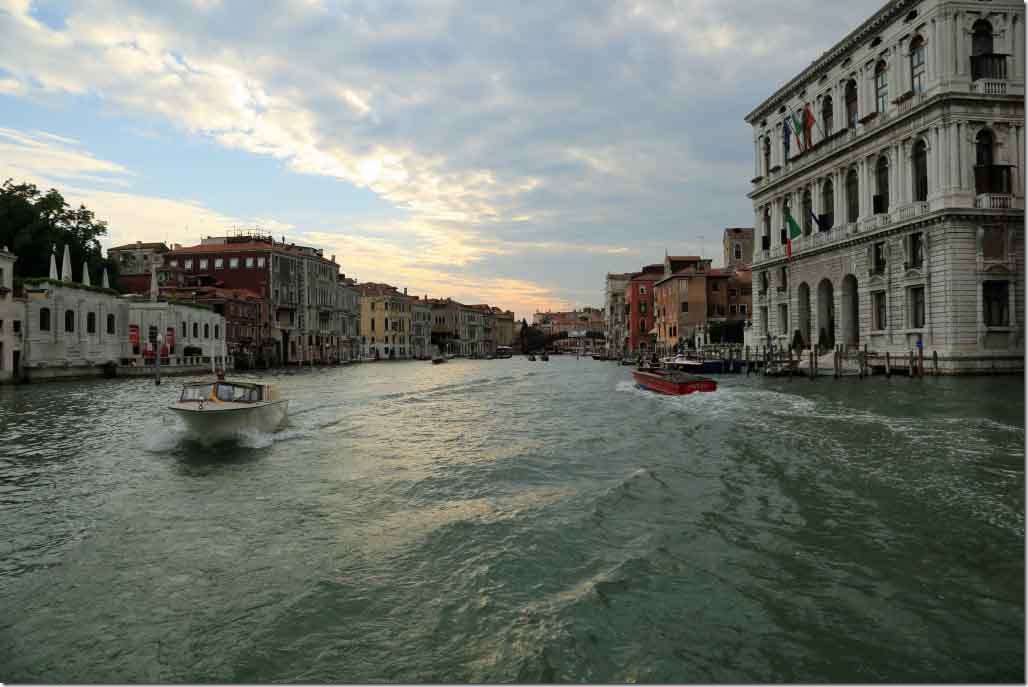 Approaching the end of the cruise with the last bastions of today’s sunshine on the Grand Canal in Venice.

We thoroughly enjoyed our day in Venice and it is indeed a magical city. However, numerous buildings are quickly falling into disrepair as many of them require a large dose of TLC. In a number of places the lack of basic routine maintenance is now causing deeper issues that is starting to affect the structure. An example being a lack of painting and repairs to the exterior rendering has caused it to crack and is now falling off, which opens the main structure to damage from the elements.