Today’s tour was a boat ride to Murano and Burano Islands, which are located in the lagoon, to the rear of Venice. Murano is famous for its glass industry and we are visiting the factory where all the glass masterpieces are manufactured. After the glass factory we head to Burano for a demonstration of hand made lace. Off course ample purchasing opportunities are available at both locations.

We headed to the Princess Theatre about 06:45 for our tour of Murano and Burano Islands. As usual, the information and updates provided in the Theatre were excellent, so we waited in comfort watching the video of previous ports,while waiting for the boat to arrive. This didn’t prevent the woman sitting next to me from complaining about the wait. Mind you, she did arrive at the same time as us, which was 10 mins early. If you arrive early and have to wait, that’s your problem, but regardless, the seats are comfortable, the film is interesting and conversation with those around you is pleasant.  When the tour was called, guides were provided to lead us down to the ship’s pontoon to board our boat for the tour.

Once clear of the ship and docks we headed down Giudecca Canal, a journey we completed 4 times yesterday. Continuing passed the Doge’s Palace we continued until Lodi Island, at which time we altered to port and headed along the channel at the tail of Venice. After passing a few homes and a marina we reached the Arsenal Shipyard on our port side. 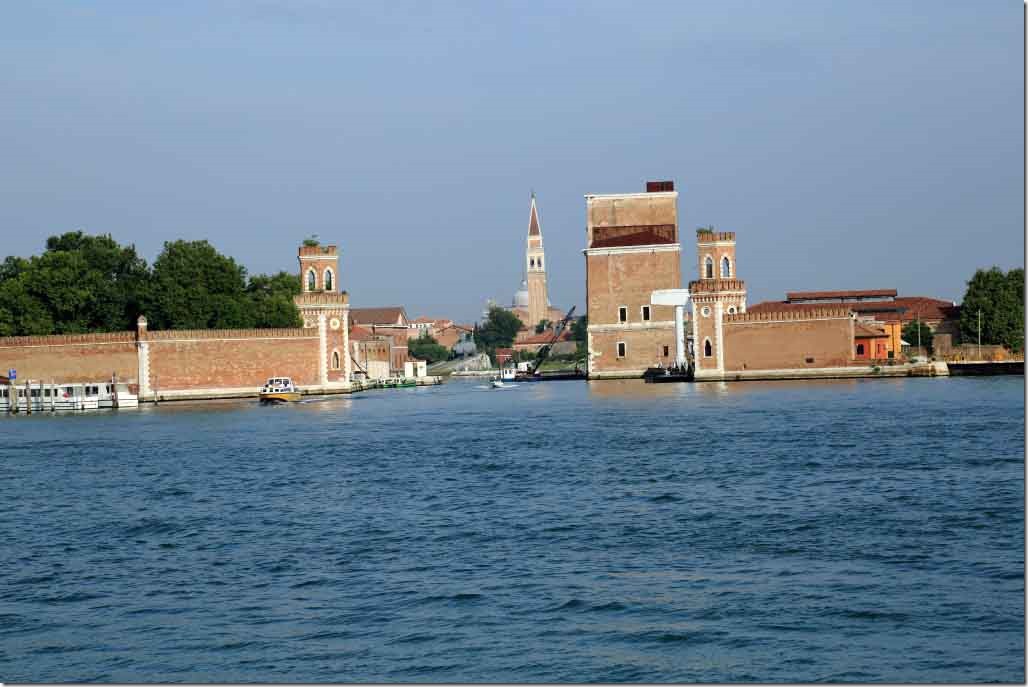 Porta Magna (built 1460) or entrance to the old shipyard and armoury complex, called the Venetian Arsenal.

One of the earliest large scale industrial complexes, this comprises shipyards and armouries in Northern Venice. From about the 1500’s this housed the bulk of the Venetian Republic’s Naval Power. Construction of the Arsenal commenced about 1104 and it quickly established itself as the largest industrial complex in Europe, spanning an area of about 110 acres, long before the Industrial Revolution. In the 1600’s the 16,000 men and separate construction areas produced a fully fitted ship every day. In reality, this was the first example of mass production, long before Henry Ford. Blocks were completely built throughout the yard and shipped to the assembly station, where a ship could be put together each day. Simply amazing. 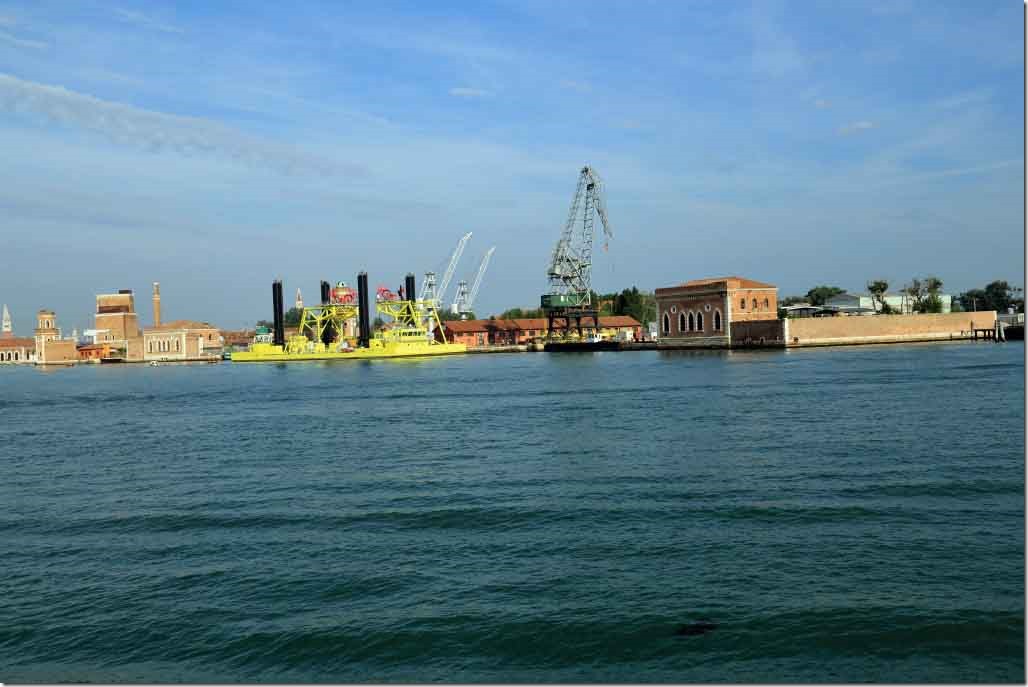 We continued along the tail of Venice towards the first island of Murano. 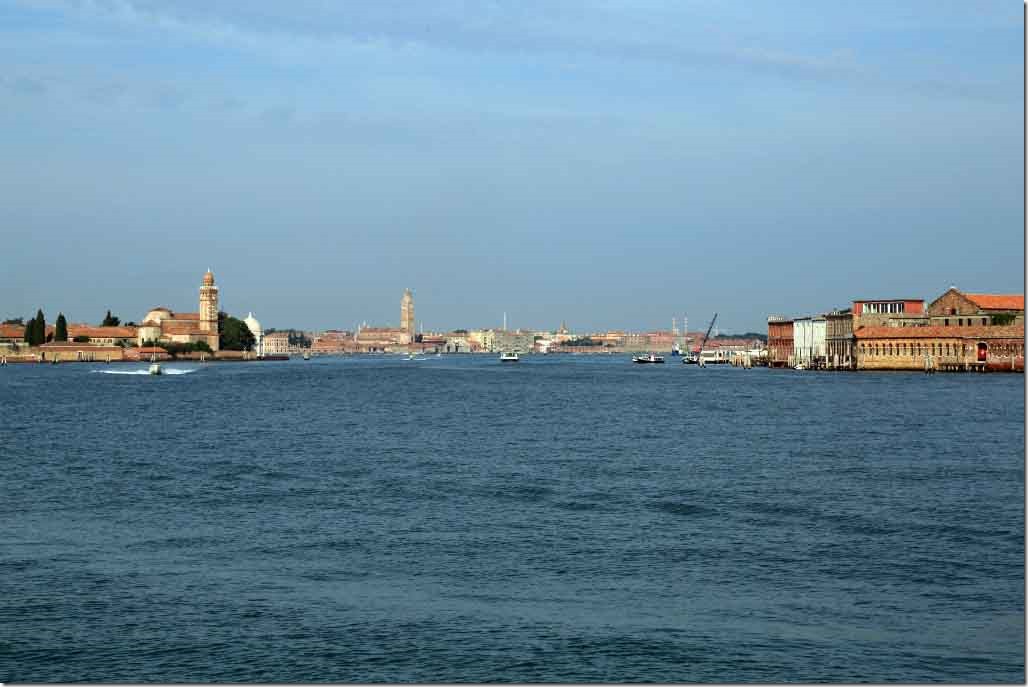 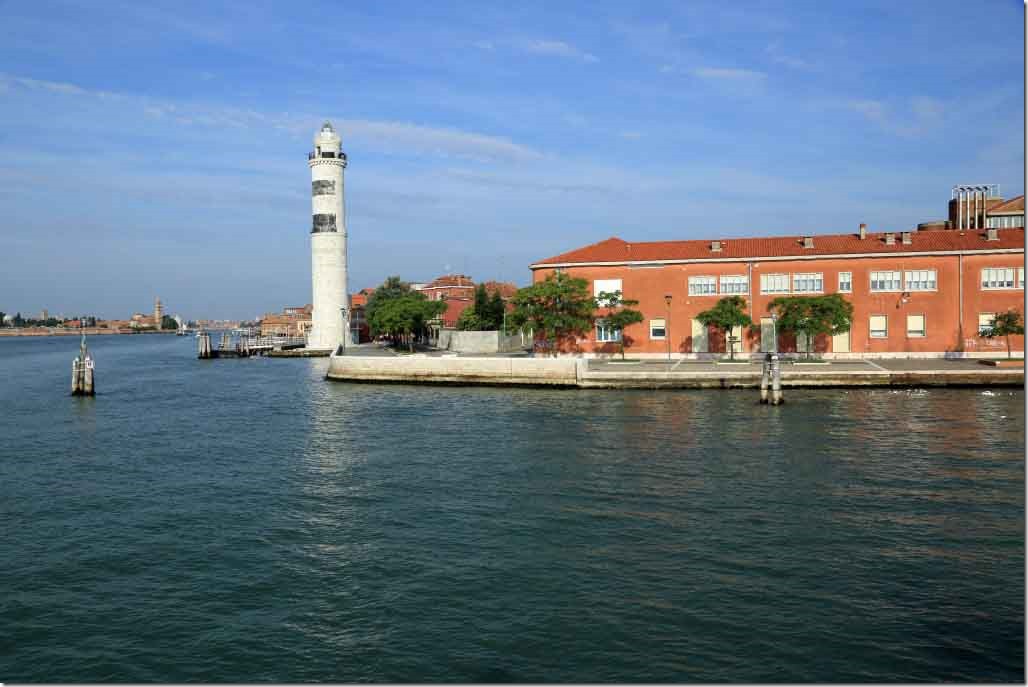 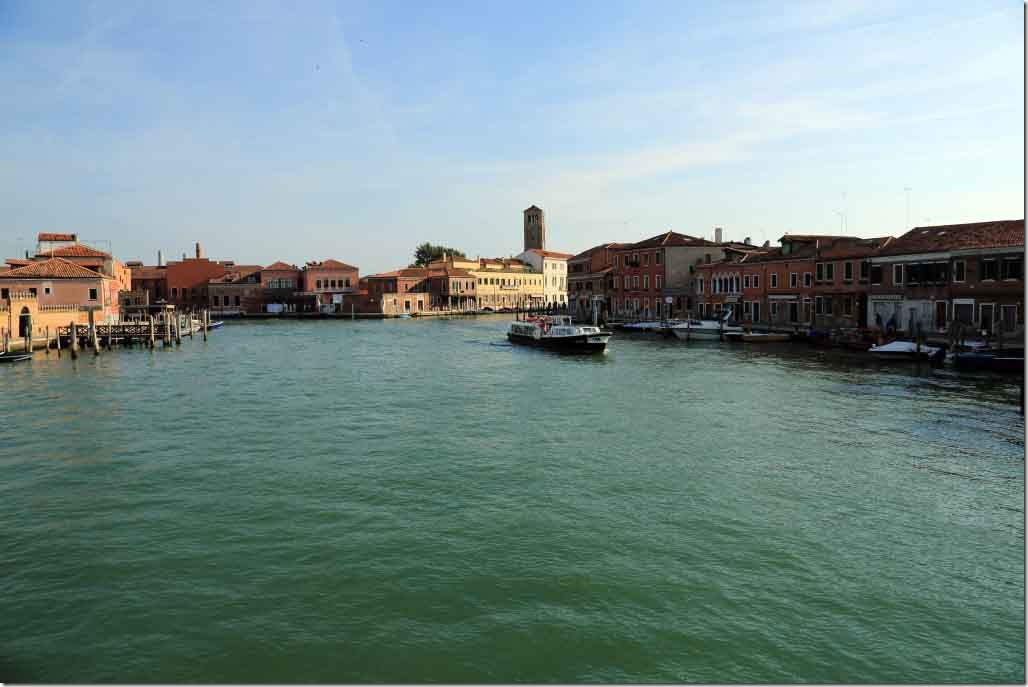 Murano Glass Factory channel. We passed the boat opposing and then altered to stbd, turning 180 degree and secured alongside the factory’s dock. After a short walk from the boat we were inside the factory and being escorted to the manufacturing area. 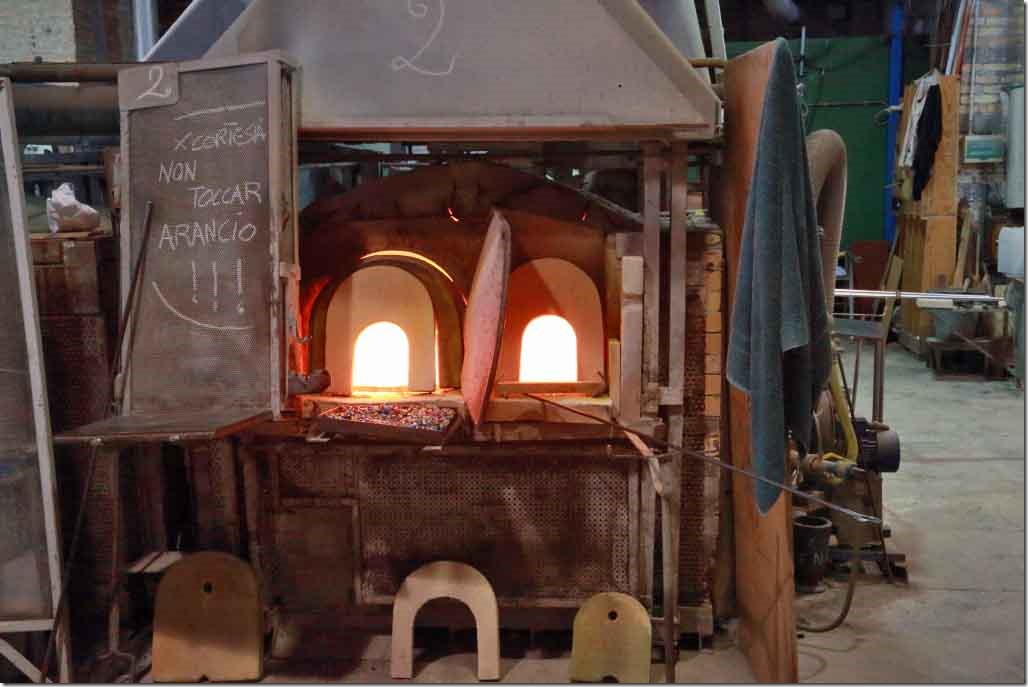 This was the first sight we saw on entering the manufacturing area. This is a natural gas powered oven, which operates in excess of 2,000F. 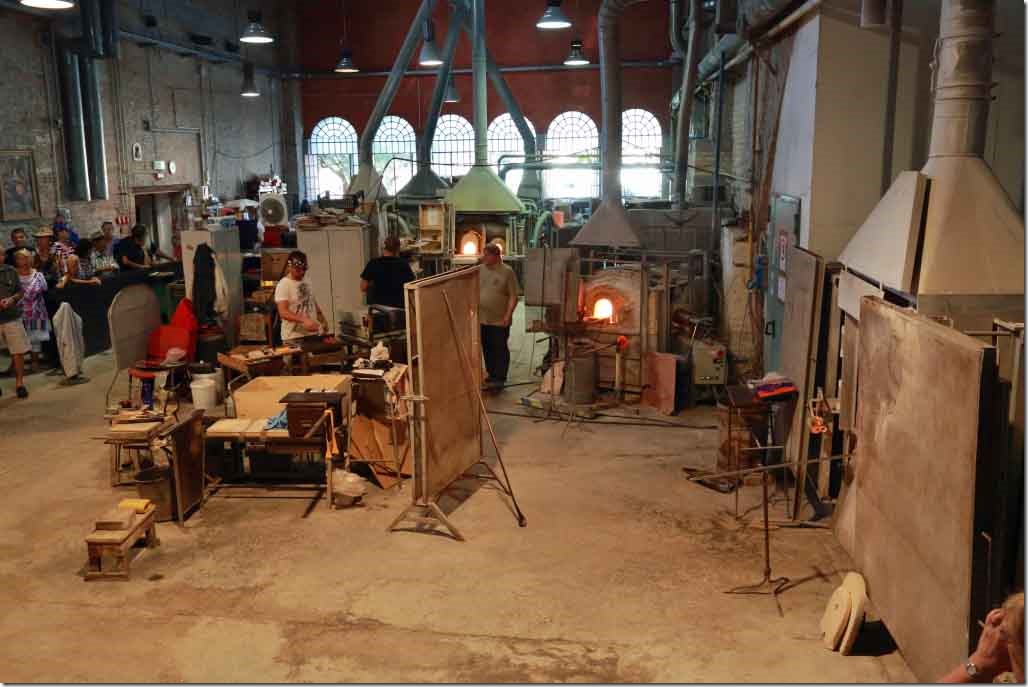 Wide angle shot of the factory floor and with all the ovens going it was really hot. Just can’t imagine these tradesmen working in that heat all day. We were seated in benches in the corner and the manager provided a commentary, while a tradesman made a vase and horse.

He started off with the vase, which actually took considerably more time than the horse. 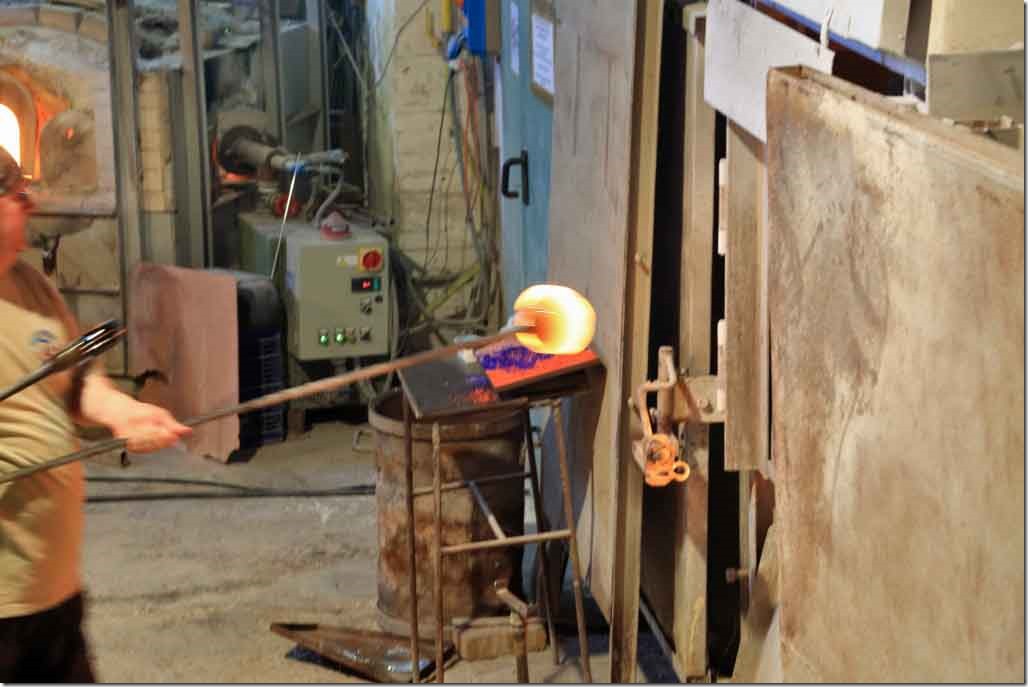 One of the tradesmen removing molten glass from the oven. They must continue to rotate the pole to prevent the molten glass from running off the stick. Basically, by turning, the centrifugal force overcomes the pull of gravity. 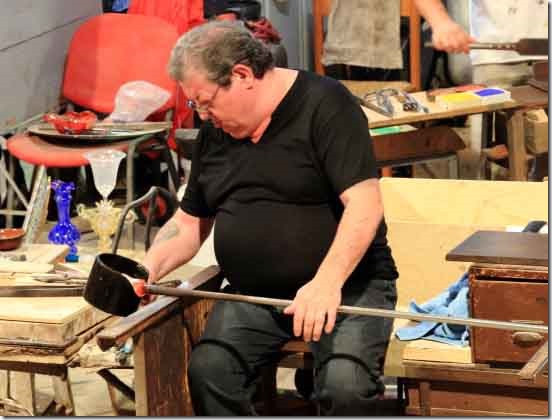 With the first load of molten glass, the tradesman rolled it in what looked like pebbles of various colours, which gave the finished vase the internal colours. He then rolled the glass in a cast to achieve an approximate shape. 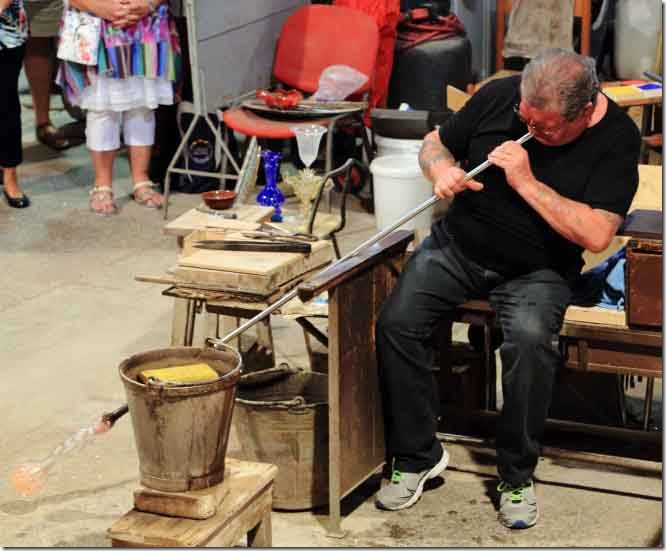 He then blows gently through the pipe lengthening the still ultra hot glass. 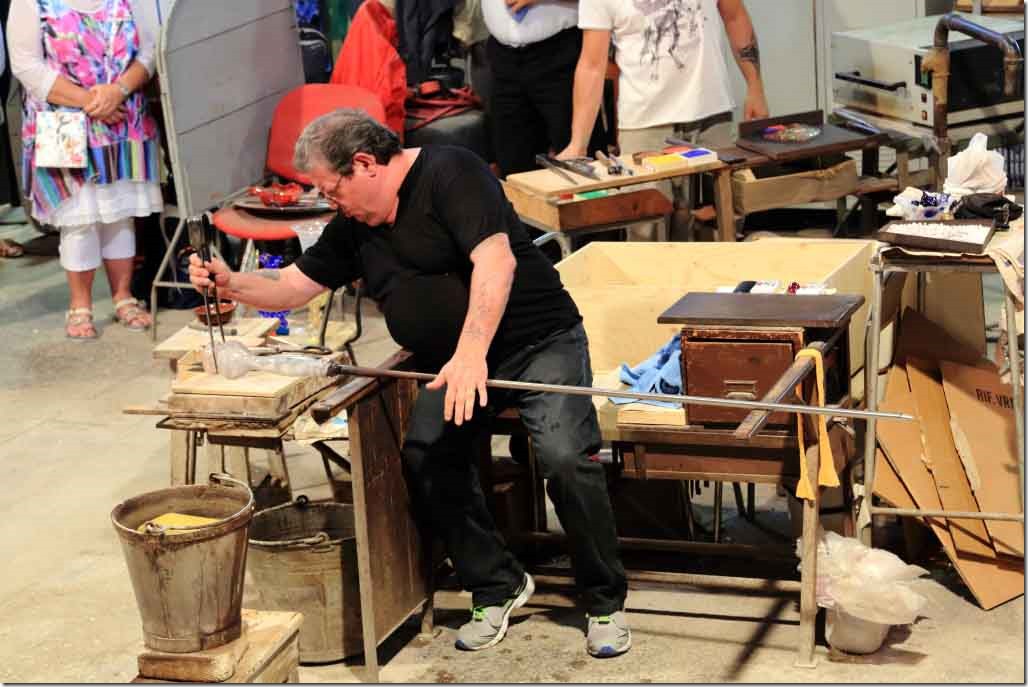 Continuously turning the pole he works the glass with pincers to create the desired bulges and hollows for the desired shape. 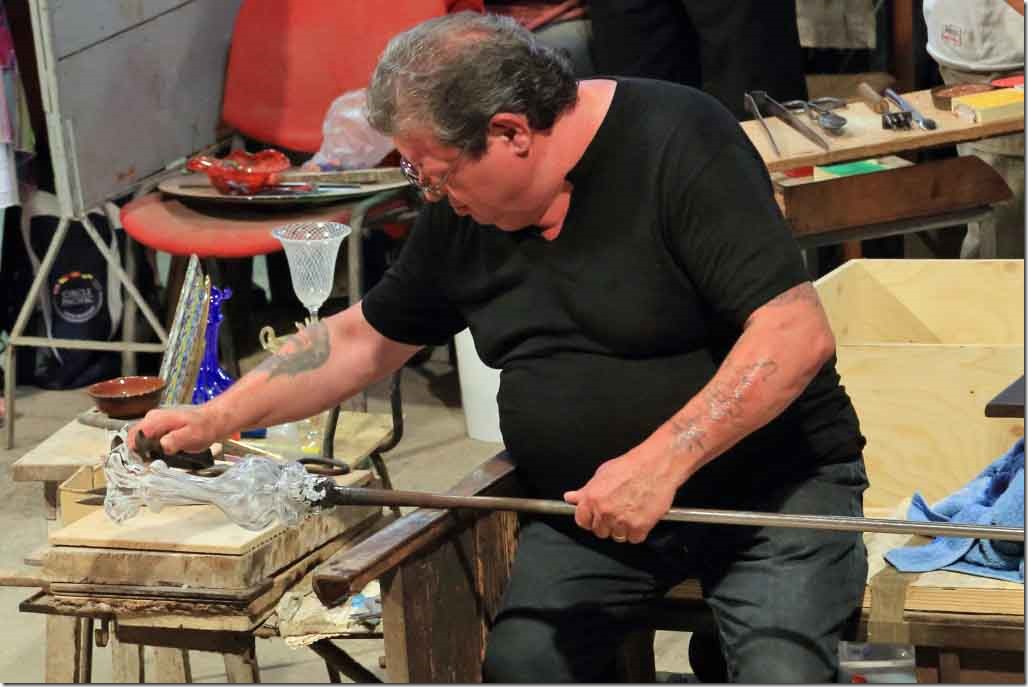 Adding the final decorative touches to the vase. 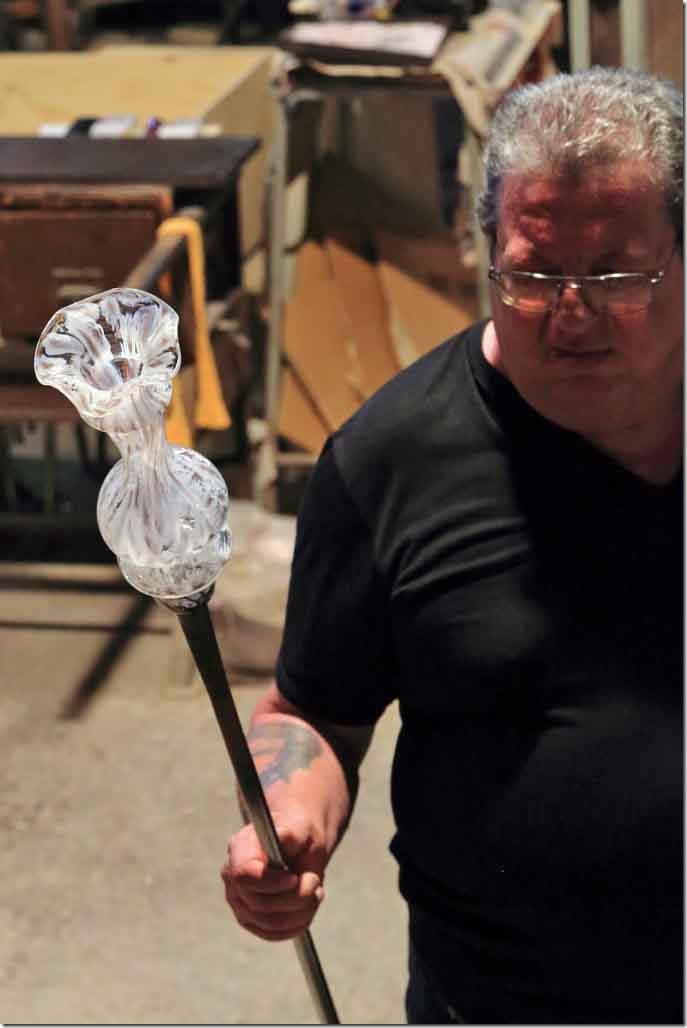 The finished product, which took about 10 minutes to make from scratch. 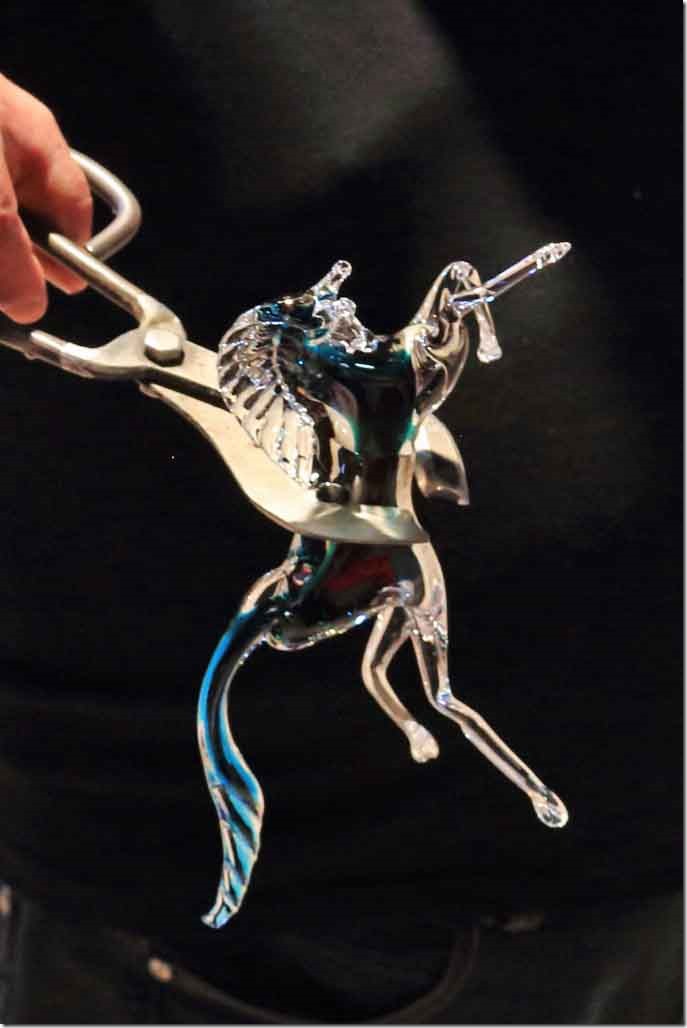 His next piece was a horse that stands on its rear legs and tail. This piece only took about 5 minutes to make, which is incredible considering the amount of detail.

Next up was the obligatory visit to the showroom, viewing the many spectacular pieces manufactured by the company. Glass and crystal are a couple of things that interest us, especially Venetian crystal, as Judi has glasses from her mum dating from the 1960’s. Since this is also our 35th anniversary cruise I surprised Judi by saying she could have anything she wanted. 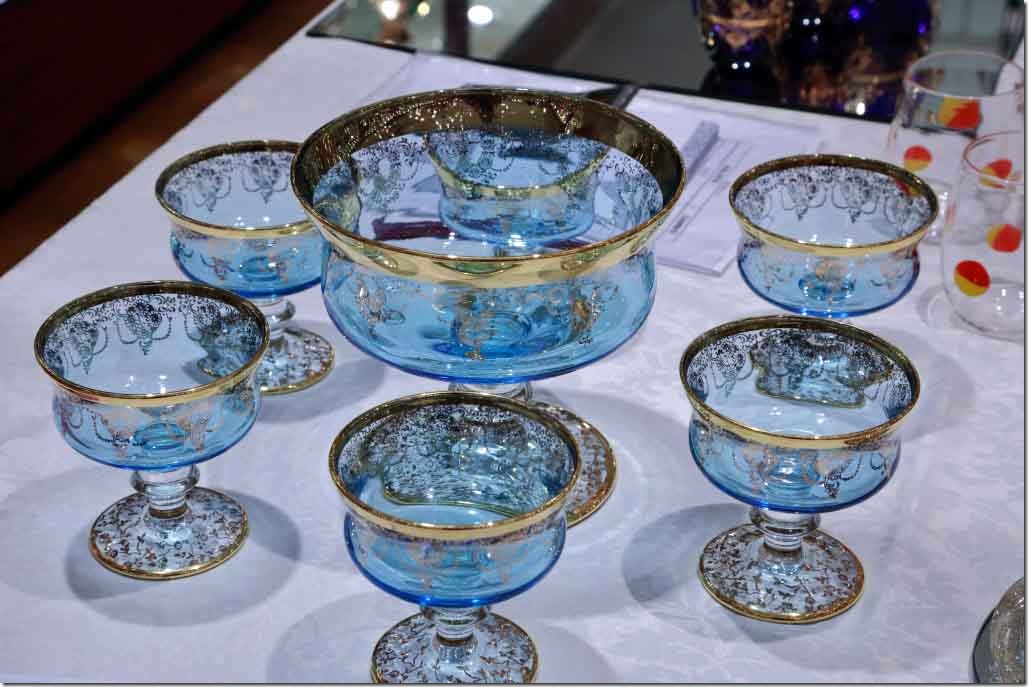 This was her choice, which they package and ship home, fully insured.

On departing the glass factory we returned to the boat for the 1/2 hour trip to Burano Island through the Venetian Lagoon, seeing some previously unseen aspects of the area. 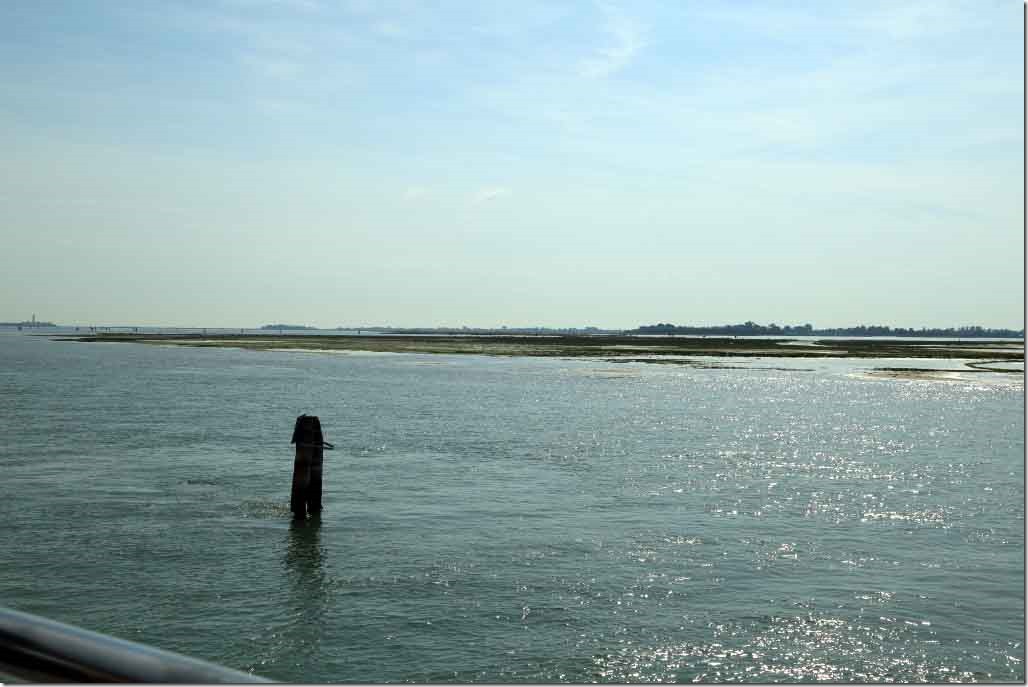 The Venetian Lagoon with some of the extensive marshes. 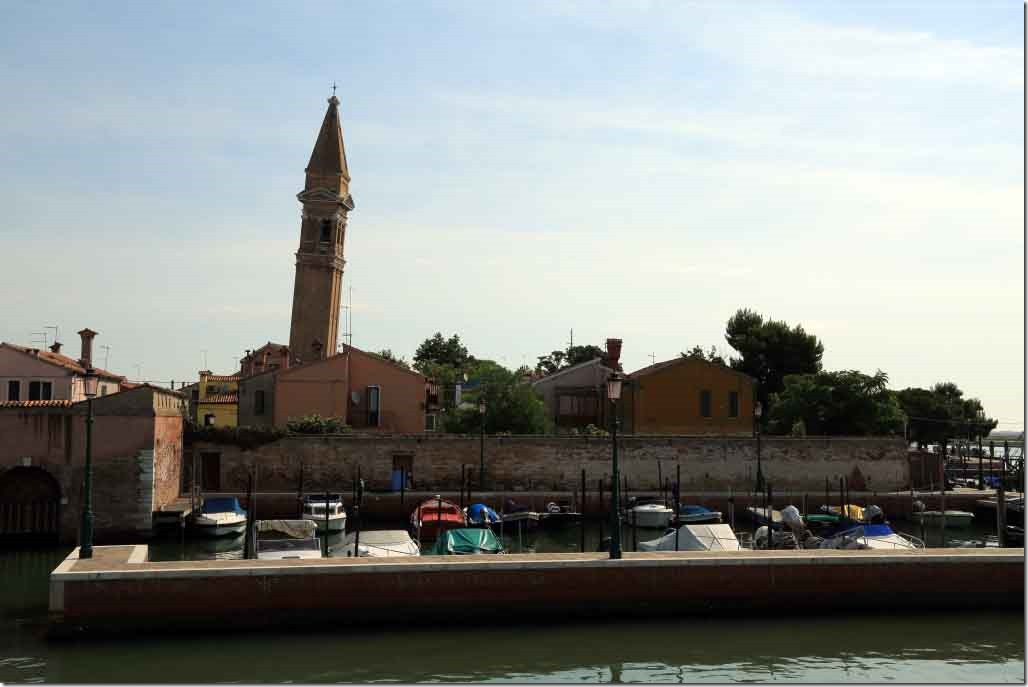 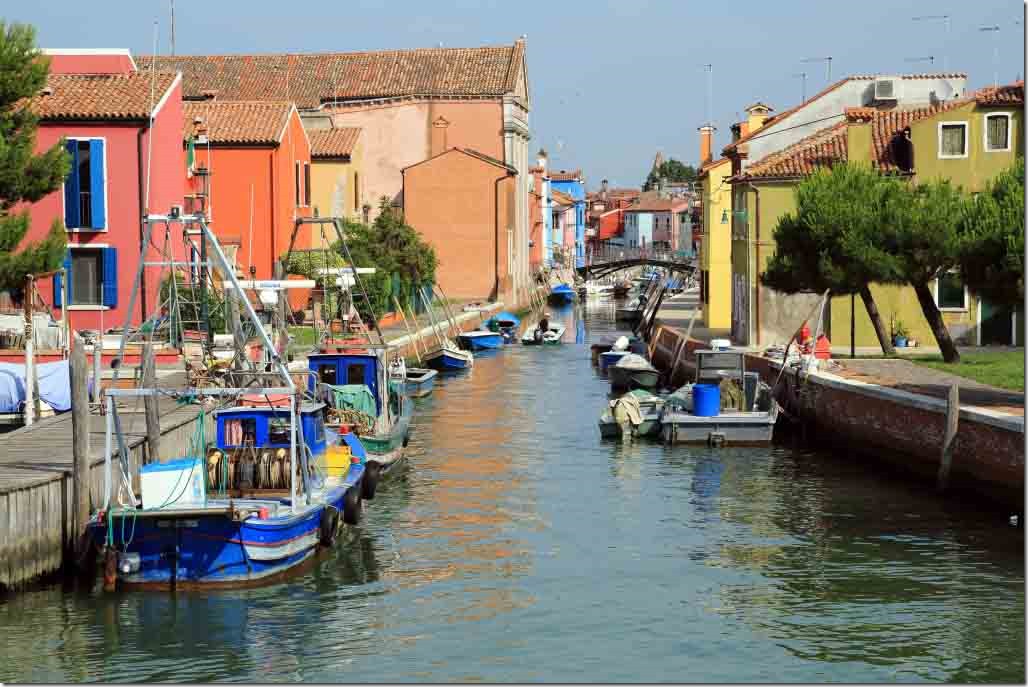 Burano Island is a maze of canals throughout the island with bright vivid coloured houses along the banks. This canal was just prior to where we secured the boat. 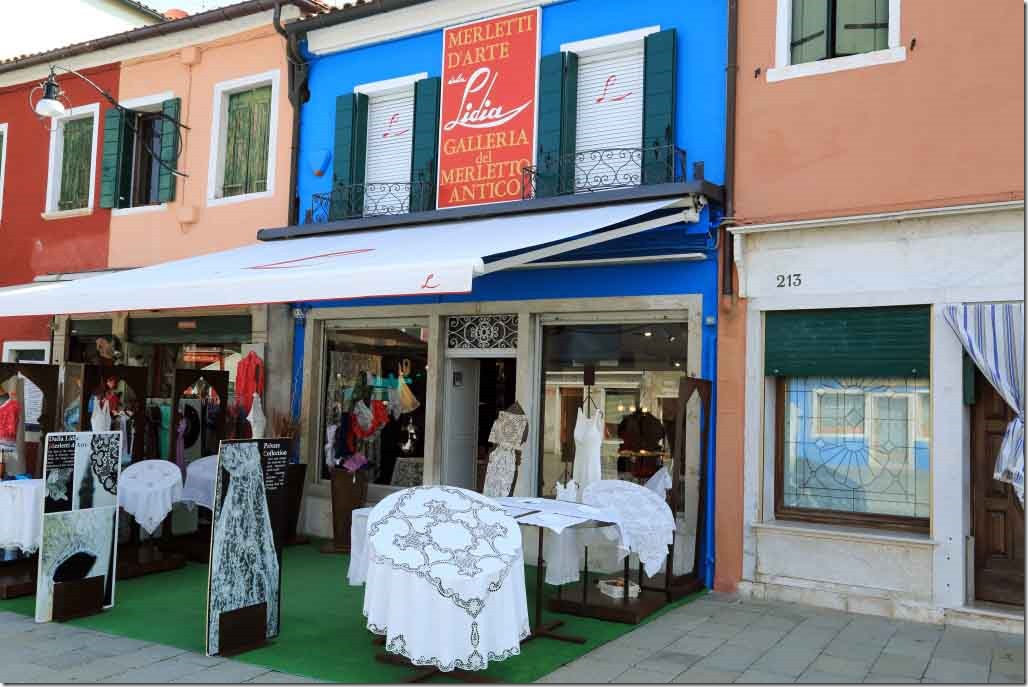 The lace shop that Judi and other pax visited.

We had about 75 minutes on Burano Island and since lace making isn’t high on my list of priorities, I elected to go walkabout, enjoying the island’s sights. The following photographs are a selection of those I took during the walk. 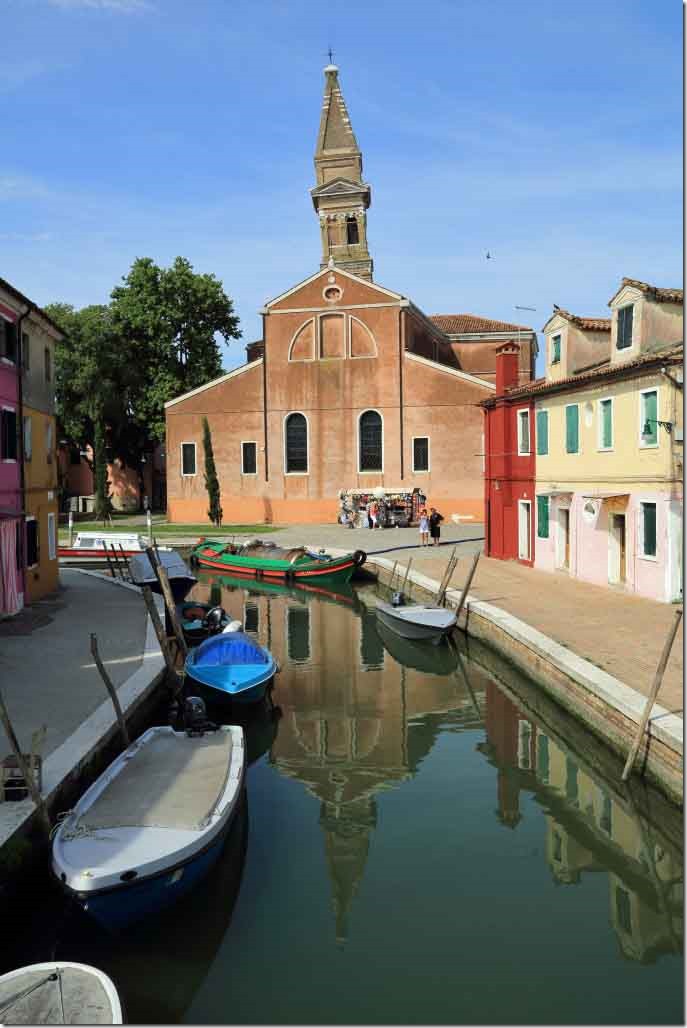 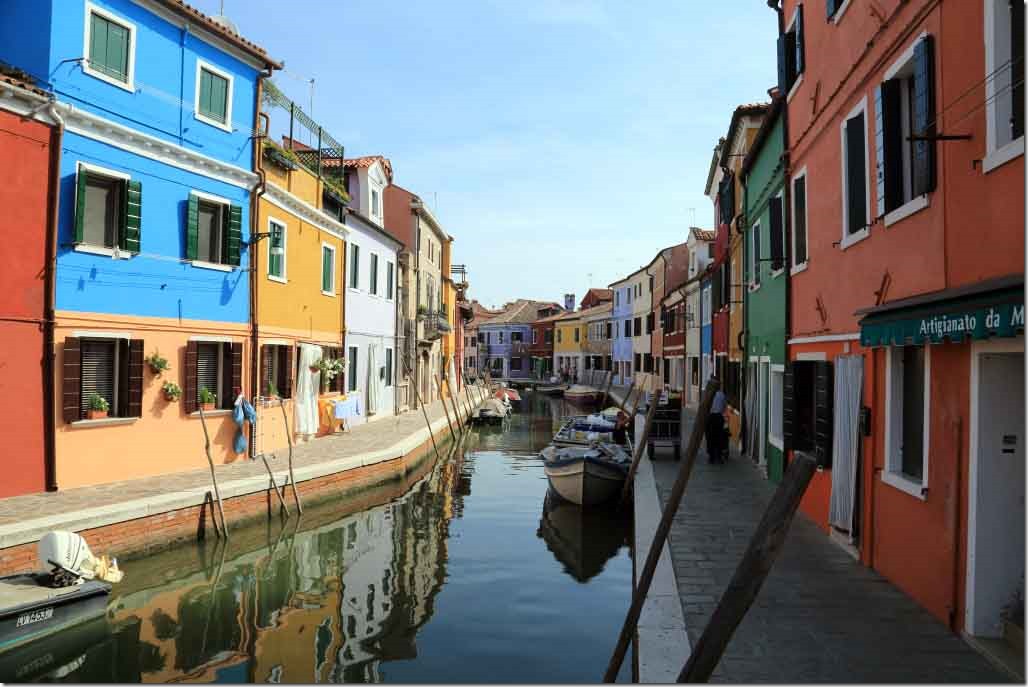 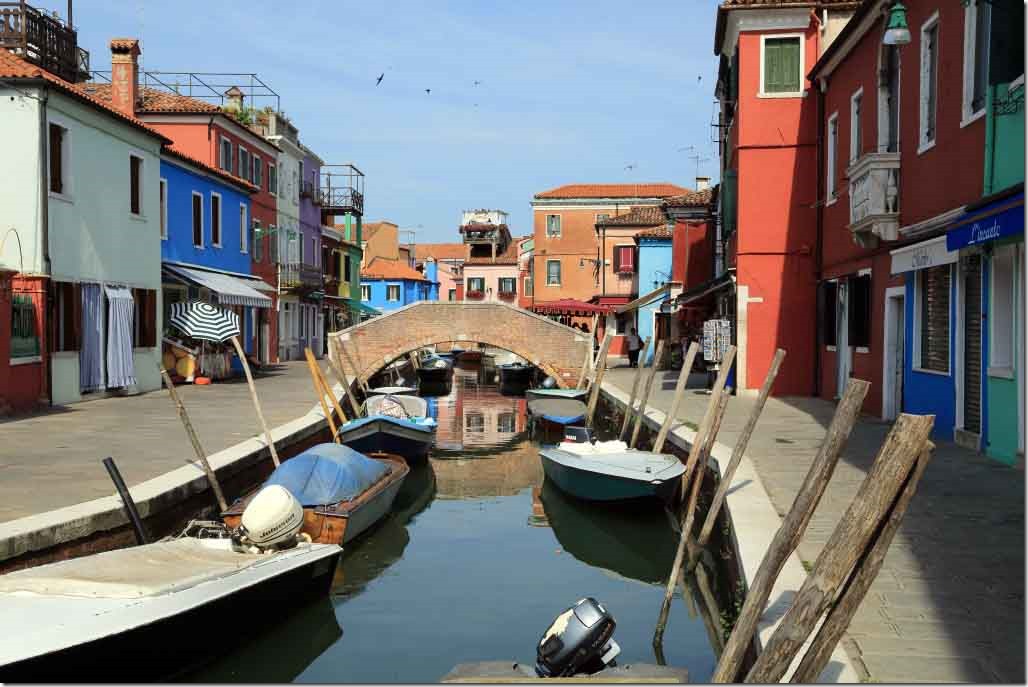 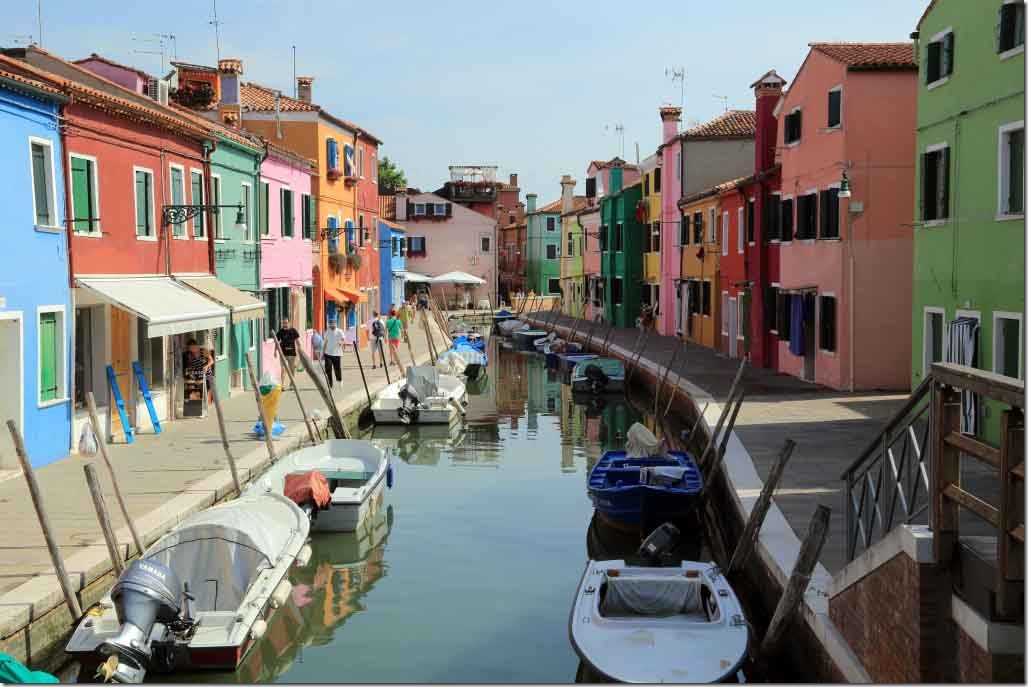 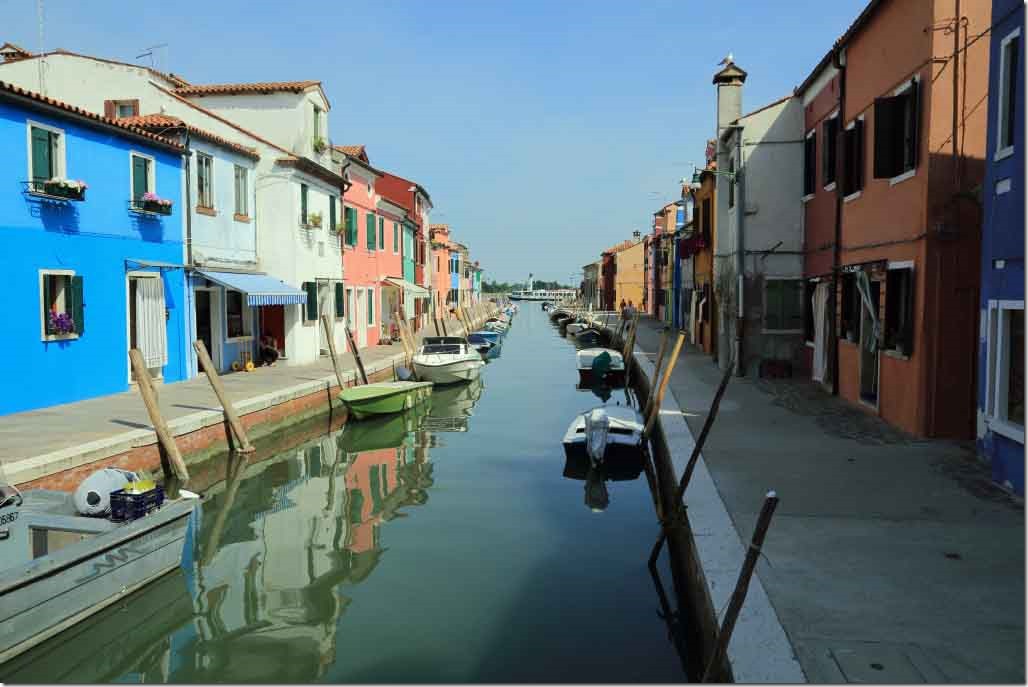 On completion of my walk around the canals I headed back to the boat meeting Judi at the small cafe, where we sat in the shade and enjoyed some ice cream.