A previous post covered the approximately 50 mile or 75 minute bus journey to/from Monaco, so this post will focus on Monaco generally, including the Grand Prix Track and the Monaco Cathedral. I have included some incredible photographs of the city, including a number of shots of the track, which include the starting line and hairpin bend.

Correctly termed the Principality of Monaco, it is a sovereign city-state bounded by France on three sides and the Mediterranean Sea on the other. With an area of only 3/4 square miles and a citizenship of about 35,000, although residents increase the number to over 250,000, it is the 2nd smallest country, but the most densely populated city and state in the world. The land border with France extends for less than 3 miles and the coastline about 2.5 miles.

Citizens born within Monaco are known as Monegasques, but naturalised citizens are known as Monacans. Our guide explained that attaining Naturalised Monaco citizenship is extremely difficult, and is mainly limited to those completing a minimum service in the security force. Residents must reside at least 110 days every year in Monaco to maintain the favourable tax exempt status.

Members of the Grimaldi family originally arrived in 1297, when Francesco Grimaldi arrived from Venice. Dressed as a monk, he gained access to the Rock of Monaco, home of the local monks. Known as “Il Malizia”, which translated means “The Malicious One” or “The Cunning One”, he and his men slaughtered the local monks and assumed control of the region. However, he was evicted a few years later and the struggle for the rock continued for another century. In 1419, the Grimaldi’s purchased Monaco, becoming the official rulers and have maintained such a position unbroken to current times.

Prior to 1911 the Grimaldi family ruled with absolute powers, but since that date it is ruled as a Constitutional Monarchy, with the Prince as the Head of State. The Government consists of a Minister of State, as head of the Government, who presides over a 5-member Council. The Minister of State is appointed by the Prince and may be either Monegasque(Monaco citizen) or French. An updated constitution in 1962 created a 24-member National Council, who are each elected for a period of 5-years. All elected members are right leaning or centre-right leaning.

The City is run by an elected 14-member Community Council, which is strictly non-partisan and presided over by a mayor. Crime is virtually non-existent, as Monaco has a huge police force and thousands of security camera located throughout the Principality.

This is the border with France. No booths, immigration officials, x-ray machines or dogs at this border. As we drove past the bus didn’t even slow down. On entering Monaco, we drove down a fairly narrow and winding road, which was the road that Princess Grace lost her life in a traffic accident in 1982. 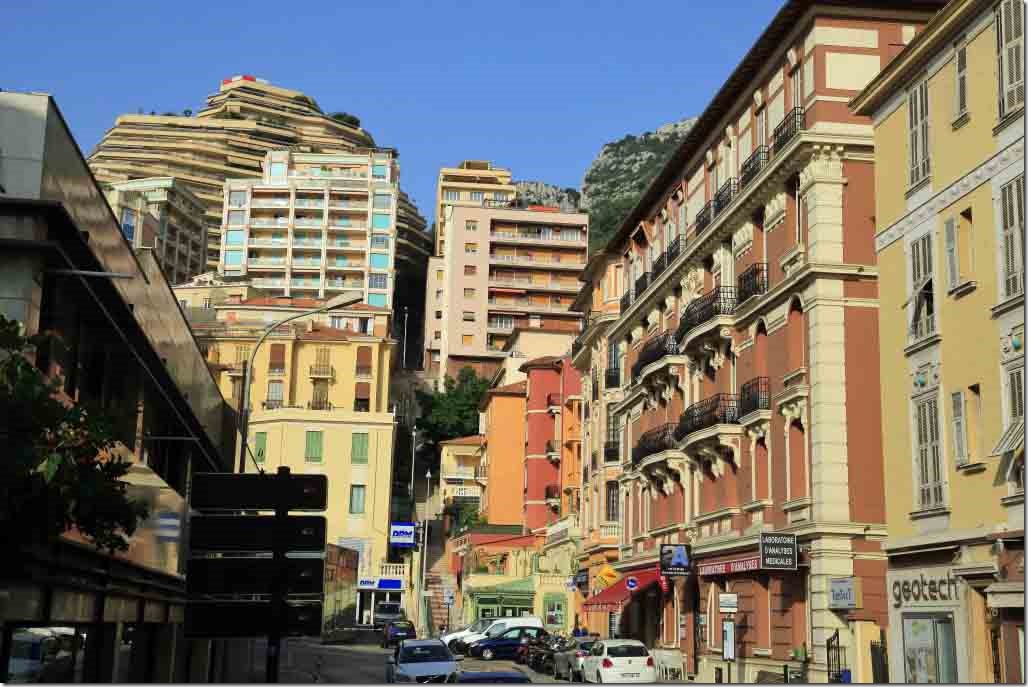 In the lower reaches of the mountain, this is an example of the buildings lining the road. 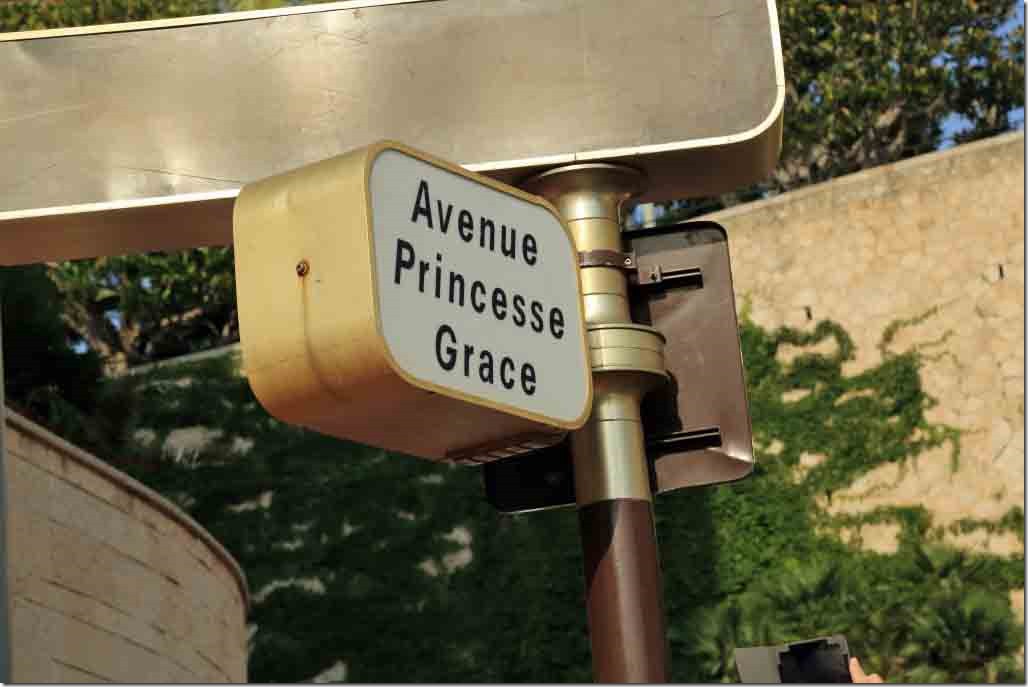 The Monaco Grand Prix is one of the pinnacles of the Formula 1 racing scene and is one of the most famous street circuits in the world.

The line across the road behind the RR is the starting pole position for the Monaco Grand Prix. 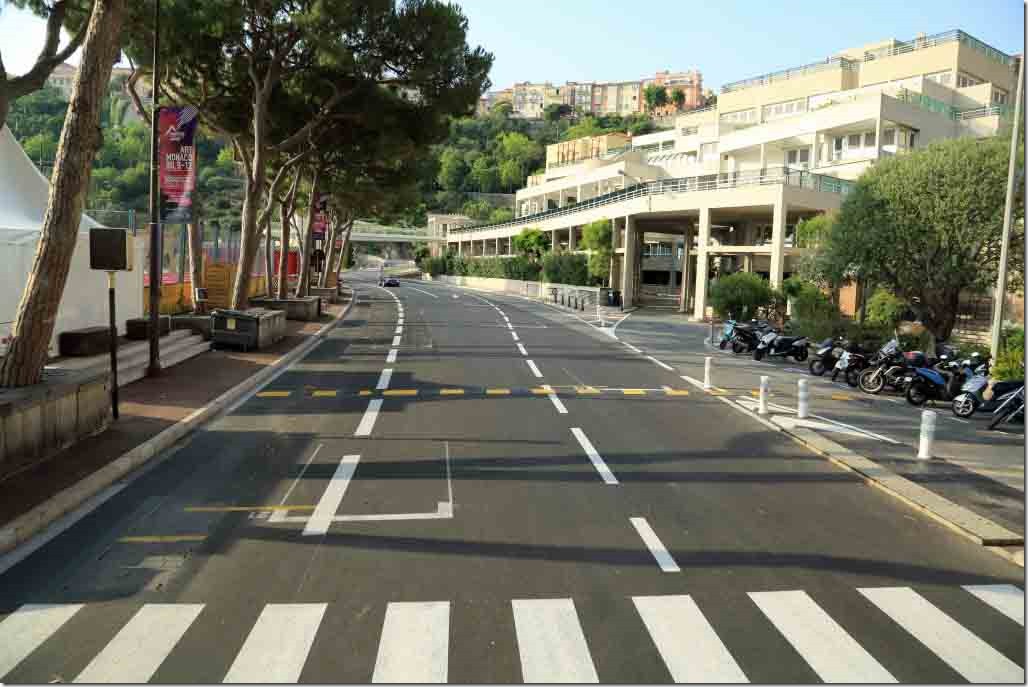 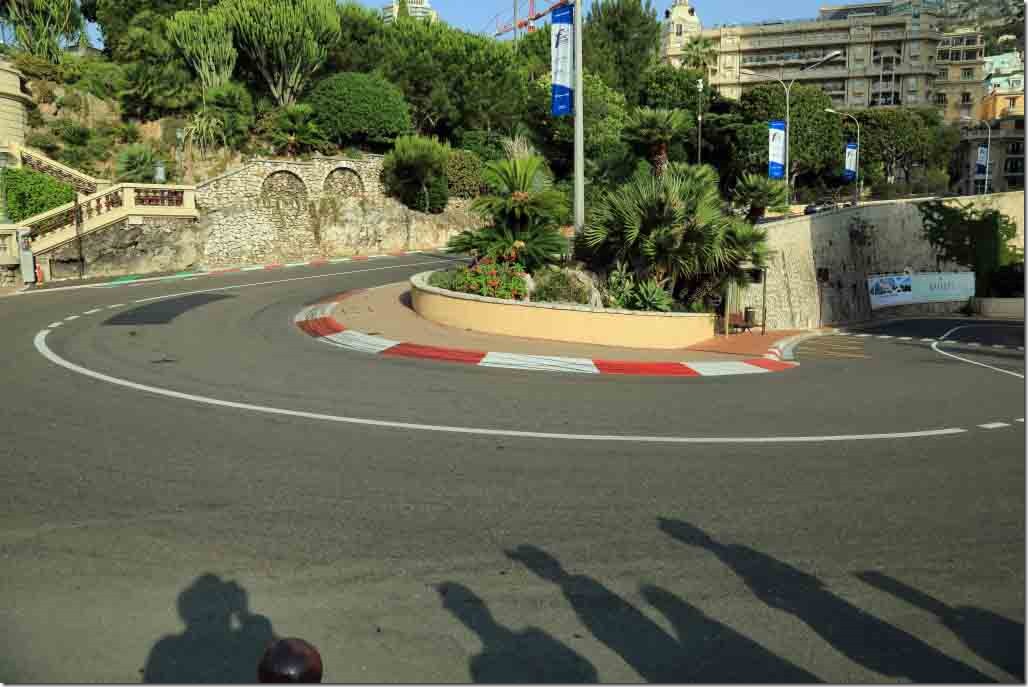 Hairpin bend, which is in front of the Monte Carlo Casino and Fairmont Hotel. 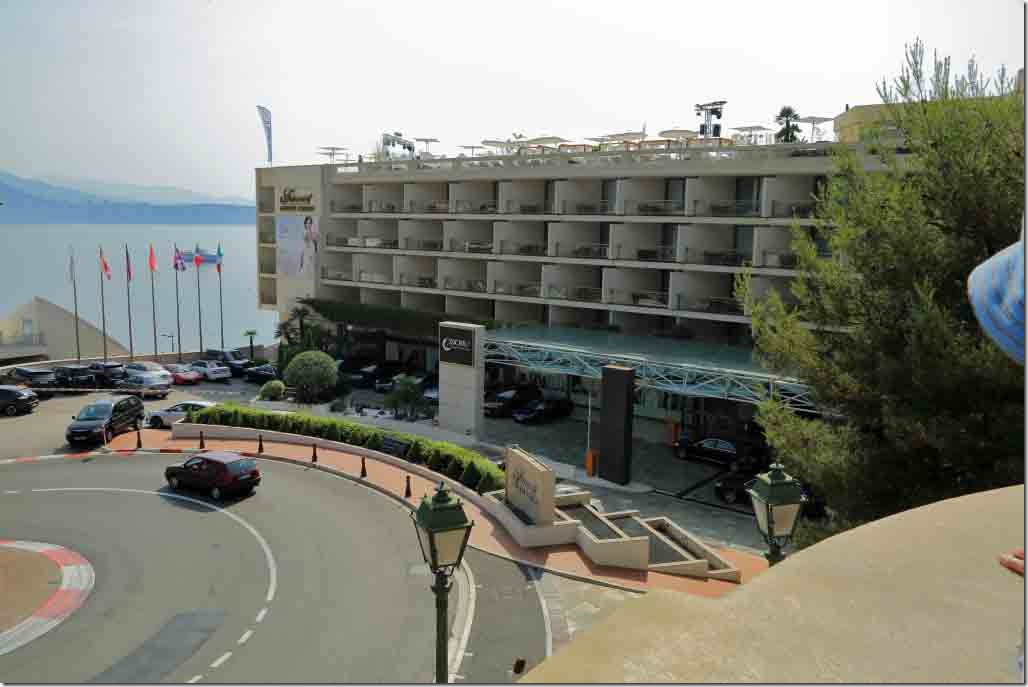 The exclusive Fairmont Monaco Hotel, which is located at the hairpin bend. During the Grand Prix, rooms must be booked for the entire 3-day event and cost a minimum of Euro 2,000 per night. However, you can sip refreshments on the balcony, wearing ear defenders, as the race cars negotiate the bend.

On departing the Monte Carlo Casino our bus took us around the harbour to an underground parkade, where we required a couple of escalators and lift to reach the surface. A short walk up a very exclusive row of water view houses led to a square with the Monaco Cathedral.

Monaco Cathedral, which is the resting place of Princess Grace. The following photographs are a selection of my exterior and interior shots.

Stone work above the main entrance.

Stone work at the top above the main entrance.

View down the centre aisle from the entrance looking towards the altar.

Altar with mosaic on the ceiling.

Close-up of mosaic on the ceiling above the altar. 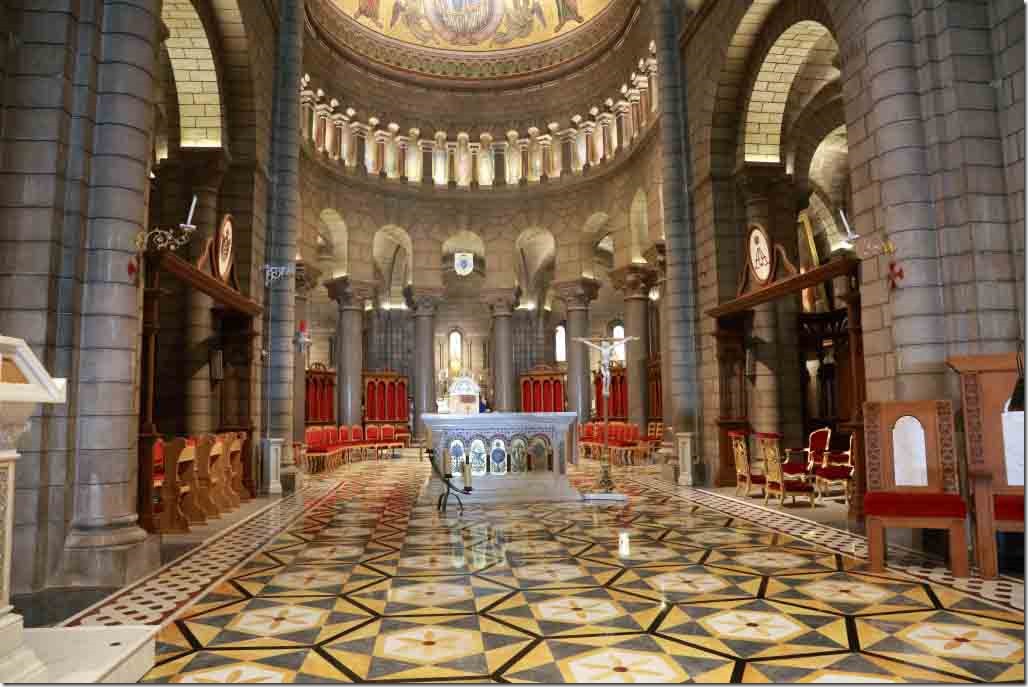 More of a wide-angle shot of the altar. 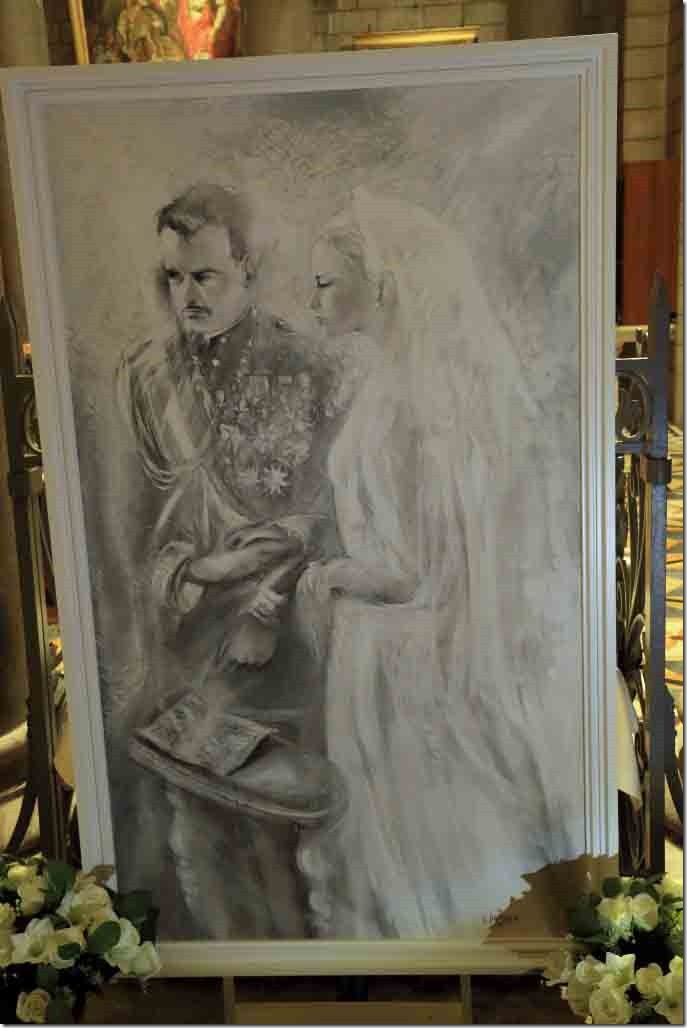 The final resting place of Princess Grace, behind the altar with other members of the Grimaldi family.

The Cathedral organ, which was playing music during our visit and sounded spectacular.

The following photographs are a few of the way too many taken today. I hope you enjoy these and the many others.

The previous 2 photographs are of the smaller harbour which is located to the left and below the Royal Palace.

Smaller harbour with housing extending well up the hill and very densely populated. 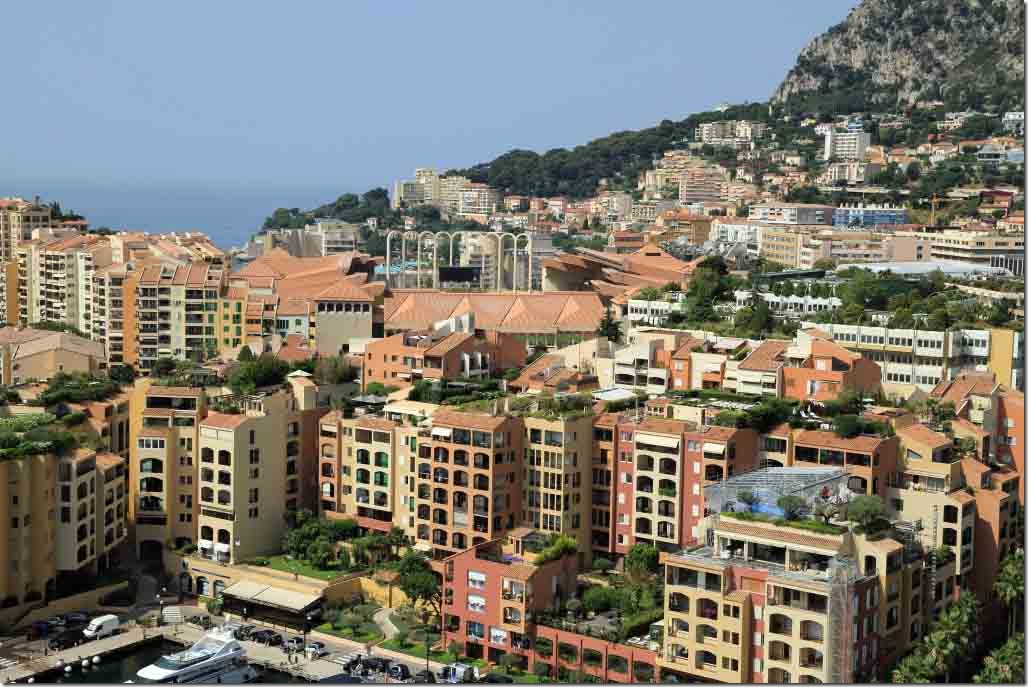 Looking down from the Royal Palace the building in the centre is actually the football stadium, which blends in well with the other buildings.

Main harbour, with a Holland America ship in port. 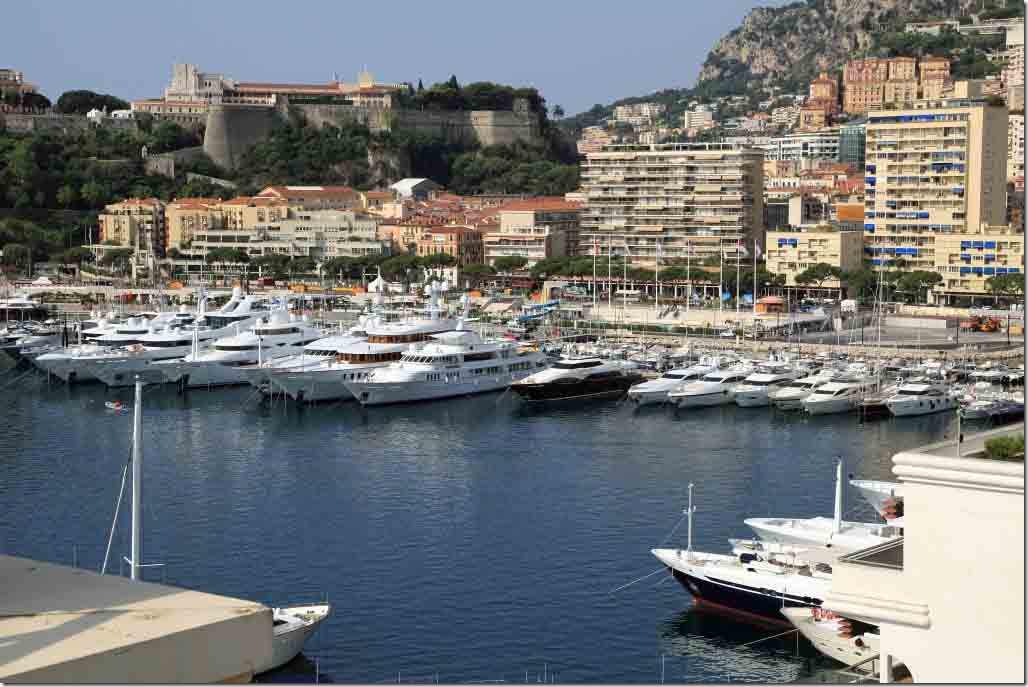 Mega Yachts and others in the main harbour with the Royal Palace on the hill in the background.

Monaco really is a beautiful city, extremely clean and well maintained. This is definitely a place I would be interested in having a return visit.