Although I’ve live in Canada for the past 35 years, this was a bit of a home coming, as I was born in a small village less than 10 miles from Greenock, which is located at the mouth of the River Clyde. Coming up river seeing Rothesay and Dunoon, then heading down river in the afternoon definitely brought a wee tear to my eye, as I recalled some of the trips we took as a child growing up in Bonnie Scotland. However, the weather today was more dreadful than bonnie, being overcast and on the chilly side of freezing cold.

Wind/Weather: Dull and overcast. Mid afternoon we got a fresh N’ly wind blowing across the Clyde

In the early hours of the morning, Sea Princess maintained N’ly courses through the Irish Sea until abeam of Coreswall Point, when course was altered to NE’ly towards the Firth of Clyde. About 05:00 the local pilot boarded for the transit up the Firth of Clyde, passing Rothesay and Dunoon before berthing alongside our berth in Greenock by 07:00.

About 17:30, with lines let go, the Captain thrust Sea Princess off the berth and backed out the channel to the turning basin, where Sea Princess turned 180 degrees before commencing the passage down the Firth of Clyde. Once the pilot disembarked about Salcoats, Sea Princess increased to full sea speed and continued with a SW’ly passage through the Firth of Clyde. Abeam Campbeltown, course was altered to Stbd and once clear of the coast a NW’ly course was set towards our next port of call in Iceland.

Located at the “Tail of the Bank” where the River Clyde expands to the Firth of Clyde, on the West Coast of Scotland. Greenock is the port for Scotland’s largest city Glasgow.

It is has a rich shipbuilding heritage and is where the Cunard Line Queen Elizabeth 2 was built at Scott Lithgow.

Awake bright and early, I sat on the balcony as we cruised up the Firth of Clyde, passing Rothesay and Dunoon, a couple of places I visited many times as a child. I still have vivid memories of the ferry rides across the Clyde to the resort towns. You have to wonder if these early memories triggered my longing for and eventual career at sea.

Greenock’s Ocean Terminal, which does double duty as a container berth and passenger terminal.

Judi slept, as I enjoyed the cruise up the Clyde from the balcony, but as we planned to meet our niece at 08:30, I had to cut her beauty sleep short about 07:30. Once she was ready we headed to the gangway and departed immediately, fighting our way through the throngs of ship’s photographers trying to snap your photo with a multitude of props. On entering the terminal, they had some Scottish lassies, with trays adorned with complimentary nips of Scottish Nectar and shortie. I declined the whisky, but enjoyed a nibble on the shortbread.

At the exit we met our niece Gillian, who graciously took the day off work to spend the day with us. She found a little cafe in Gourock, One Cove Road Cafe, so we jumped in her car and headed to neighbouring Gourock. It didn’t open until 09:00, so we sat and chatted and enjoyed the scenery for a few minutes. They had a brilliant selection of teas and even deliver an egg timer with the tea, so you can give it the proper brewing time. A nice touch. Their menu was very simple, but their ingredients are all local, fresh and organic. I had the Lorne (square) sausage and fried egg roll, which is a traditional Scottish delicacy. Washed down with a steaming hot mug of English Breakfast Tea, it was a great start to the day.

View of the River Clyde at low tide from the One Cove Road Cafe where we stopped for breakfast.

We sat and chatted between ourselves and the staff for well over an hour, then jumped back in the car to head into Glasgow, to meet my dad for lunch. Arriving at Ibrox Stadium, the home of the Almighty Rangers Football Club, we headed to the Rangers Megastore to get a couple of new outfits for our Grandson Owen. He may be Canadian, but grandpa’s job will be to teach him all about the family affiliation with the Rangers, as his Great, Great-Grandfather was one of the original shareholders and had premium seats adjacent to the Director’s Box.

This is from our seats at the match we attended in early April. The restaurant is located at the rear of the stand, just below the roof.

After some shopping, we headed to the restaurant for lunch, at our customary table in the booth at the 1/2 way line.

This is the view of the pitch from our table. I note that Rangers colour’s are blue and nothing in the stadium is green. You may ask, what about the grass, well actually it is predominantly Kentucky Blue Grass. We had a great meal.

A rather smooth and pleasant pint of John Smith’s Heavy

The fish and chips were huge portions, with 3 large pieces of haddock.

Approaching 14:30 we had to break-off the post lunch conversation, as we needed to get back on the road and return to the ship. It also let my dad get through Glasgow before rush hour, so he had an easier drive back to St. Andrews. With the Open Championship starting in St Andrews today, I think he enjoyed getting out of the hustle and bustle, which will have been building steadily for the past few weeks.

Returning to Greenock, we stopped at the local Aldi Supermarket for some fresh milk, rather than the UHT stuff they use onboard, and I picked up some cans of McEwans Export. Back on the ship, we lay down for a few minutes and promptly fell asleep, not waking until the ship’s whistle sounded on departure. OMG! we were meant to have called our daughter Heather. Fortunately she was still at home, although she was getting ready to take our grandson Owen to the doctor’s office for his next shots.

After chatting with Heather, I watched the transit down the mighty Clyde, which brought another wee tear to my eye, after such a short visit with family in the land of my birth. 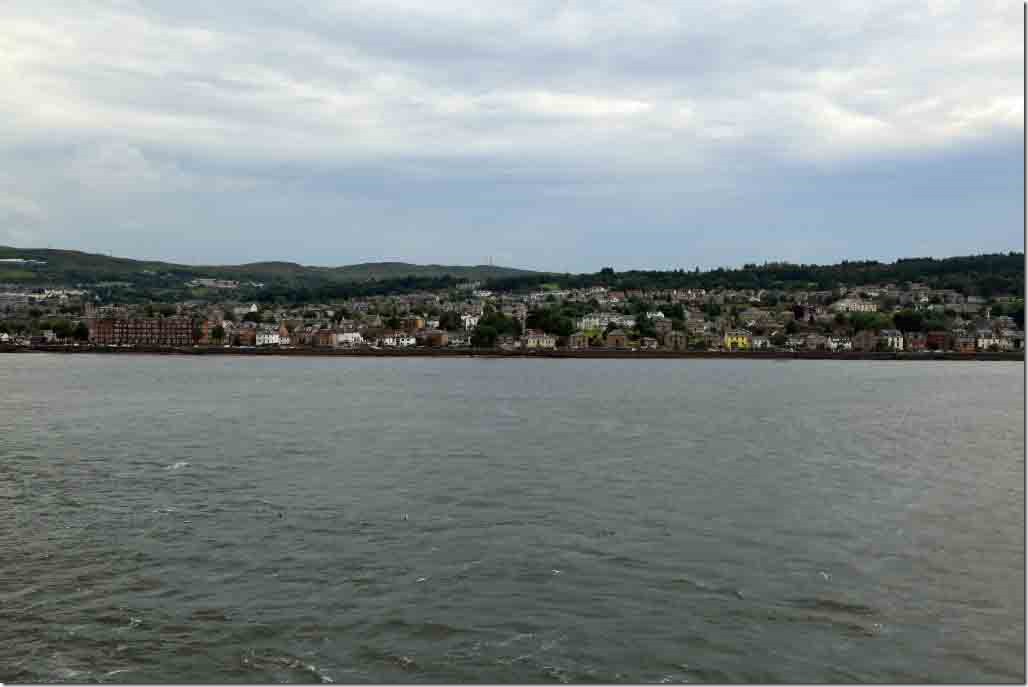 Some of the water front and water view homes along the Clyde in Greenock.

Gourock waterfront, including the small cafe we stopped at this morning for breakfast.

Looking astern down the Clyde towards Dunoon and Helensborough.

Looking down the Firth of Clyde with the mountains of the outer isles in the background.

Dinner tonight only had 5 of us, but we were all in agreement it was one of the best meals on the ship, so far. Bob advised the Head Waiter is was only the 3rd good meal in almost 60 days. Judi started with Caesar Salad, which was excellent and then we both had braised lamb shanks. It was so hot that Judi almost burned her mouth. Wow, hot food from the Sea Princess galley, only a few days ago we would have laughed at such a statement. No really, we have noted an improvement, which we can only hope continues.

The entertainment this evening was a production show featuring the Sea Princess singers and dancers. Having not enjoyed any of their previous attempts at entertainment we all elected to give it a miss, instead retiring for an early night.