Today we should have been enjoying the sights of Halifax, Nova Scotia, including our planned visit to the Maritime Museum for the Titanic Exhibition, followed by lunch at a downtown Irish Pub. However, the Captain changed the itinerary yesterday, cancelling Halifax and sailing directly to New York, hence we have another sea day. We were so looking forward to Halifax, having deliberately not visited the Maritime Museum during our visit last summer, as it was only a short walk from the cruise ship terminal.

Sea Princess maintained W’ly courses through the Atlantic Ocean towards New York, initially at about 19.6 knots, but when I checked at Noon the speed was down to about 18.7 knots.

Heading down to the Promenade Deck about 05:30, I was surprised to find all exterior doors closed off, so I just walked around the accommodation on Deck #7 until they opened the deck about 06:00. Not as pleasant as walking in the fresh, salty breeze, but at least it was exercise. Judi was awake early this morning, so we turned on the telly to check the Wake Show, which advertised a meeting with Angus, the Customer Services Director, who would discuss arrangements for arrival New York.

They still anticipate being secured alongside by 19:00 and all pax must attend the compulsory U.S. Immigration procedures, ashore in the terminal. The authorities have also advised the ship that nobody will be permitted to re-board the vessel until all pax have completed immigration. As usual, the Purser’s Department have developed plans to minimise queues, provided all pax adhere to the plan. They will implement a group number system, with small numbers of pax in each group. Group numbers will be issued in the Vista Lounge from 19:00 and once you receive a number, you will be expected to remain in Vista until that number is called. Therefore, we really have 2 preferred options – if going ashore try to get an early number, or relax aboard all evening and get one of the later numbers. Since we are doing a full day tour on the Ho-Ho bus the next day, we will relax aboard and get one of the last group numbers. Once we clear Immigration we will have to remain in the terminal until the ship is cleared, then we can return aboard.

Having discussed our options and picked the preferred one for us, we headed down to breakfast, which was again at least warm. The improvement in the galley does seem to be making some headway. After breakfast we headed to Vista Lounge, where Judi completed the entire Zumba Gold session and I did the regular Zumba. Great workout. After a quick shower, it was off to the Princess Theatre for the daily naval lecture from David Russell. On arrival I noted the previous activity running late, so stood off to the side of the x-alleyway, well outside the Theatre entrance. Alas, most of the others were crowding around the entrance, so when the previous activity finished they blocked the exit for those leaving the theatre. Once the last person departed the theatre the pushing and jockeying really started as they tried to be first into the theatre. I’ve never seen the theatre full yet for a lecture, so I really can’t figure out why the rush. Actually, I find it almost comical.

This morning’s lecture was titled, “The Battle of Midway”.

Midway Island was seen as a strategic base by both the U.S. and Japanese Forces, so Admiral Yamamota launched an attack to wrestle the islands from U.S. forces. However, a couple of notable events occurred between the attack on Pearl Harbour and the Battle of Midway 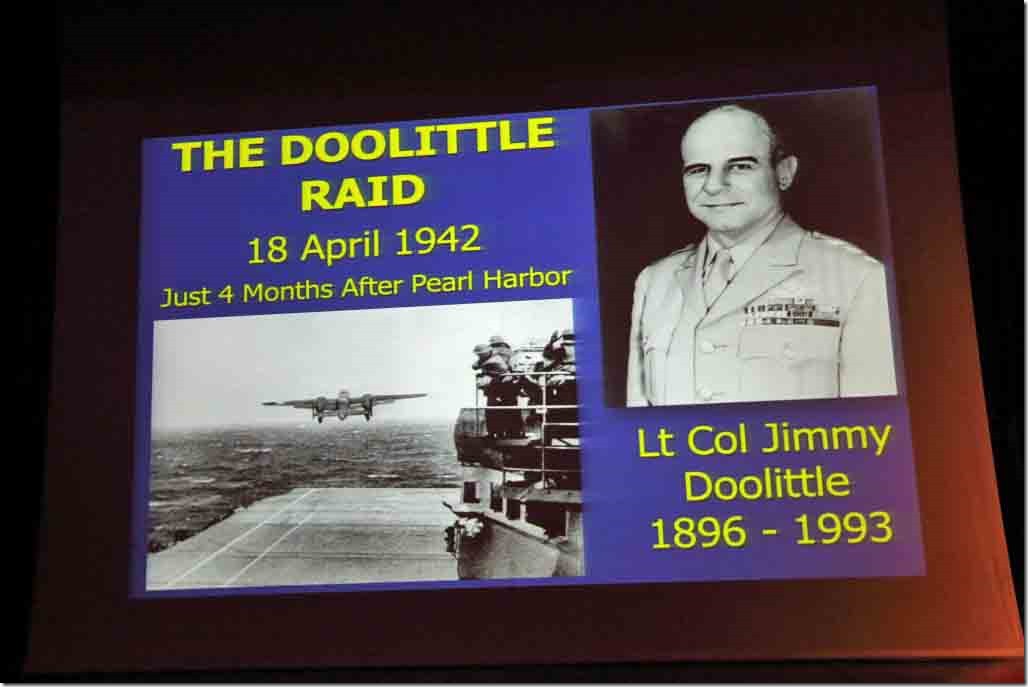 The Doolittle Raid, led by Lt Col Jimmy Doolittle consisted of a force of B-17 bombers taking off from a carrier, dropping bombs on Japan and then landing in China, to join forces already operating from that region. No real damage was caused, other than a huge dent in morale, as the Japanese were told the U.S could never reach Japan with bombers.

The Battle of the Coral Sea was a tactical win for the Japanese, as they sunk 1 carrier and badly damaged another, with only 2 of their carriers damaged. However, strategically this was a win for the U.S. forces, as the damaged carriers were unable to participate in the Battle of Midway, whereas the USS Yorktown was repaired and participated at Midway.

The Japanese set off with 4 carriers and additional battleships, which were about 2 days behind the carriers. However, unlike Pearl Harbour the U.S. Forces were reading enemy signals and had advance warning of the attack, setting up an ambush in response.

The result was the first battle loss for the Japanese Navy for many years, which included the sinking of all 4 carriers. 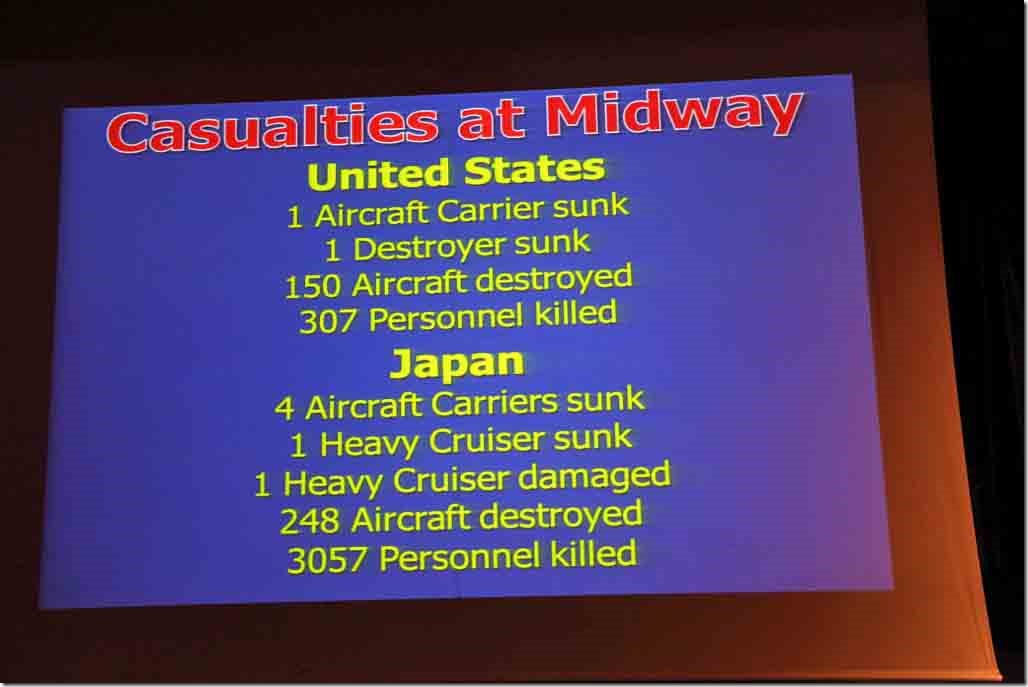 Total losses at the Battle of Midway.

Lunch this afternoon was excellent and while my samosas and Judi’s sandwich were tasty and piping hot, we should have listened to the waiter’s recommendation of pork chop. Wow, the chops were a good size and cooked to perfection. We are pleased that the improvement in the galley’s performance continues. The afternoon was a very lazy day, with nothing on the schedule we found appealing. We sat on the balcony and enjoyed the sound of the ocean passing by, on the first clear and warm day for weeks.

With no pre-dinner entertainment this evening, we headed down to dinner at 19:45. Most of us had the Rack of Lamb, which all were cooked to perfection. My medium rare was seared on the outside and pink throughout. When served it looked like one of the best meals so far, this cruise. Unfortunately, the lamb was closer to mutton and is what I consider a negative calorie meal, as cutting the meat and chewing it uses more calories that the meat provides. Seriously, it was like shoe leather, it was so tough. We actually struggled to cut it with the knives. Needles to say, it all got returned, even the table next to us provided the same comments.

After dinner we attended the post dinner show. While he was an excellent singer and put on a great show, the soul music just isn’t my type of music.