After completing the HoHo Downtown Loop our priorities for the remainder of the day were – Ground Zero, Macy’s and a stroll along 8th Avenue towards Times Square. We spent a couple of hours at Ground Zero, visited Macys and walked along 8th Ave, stopping for dinner, but by then Judi’s back required a rest, so we headed to the shuttle, returning to the ship about 19:30.

Departing the Ho-Ho Bus at stop #11, we spotted the following scene while still on Broadway Street. 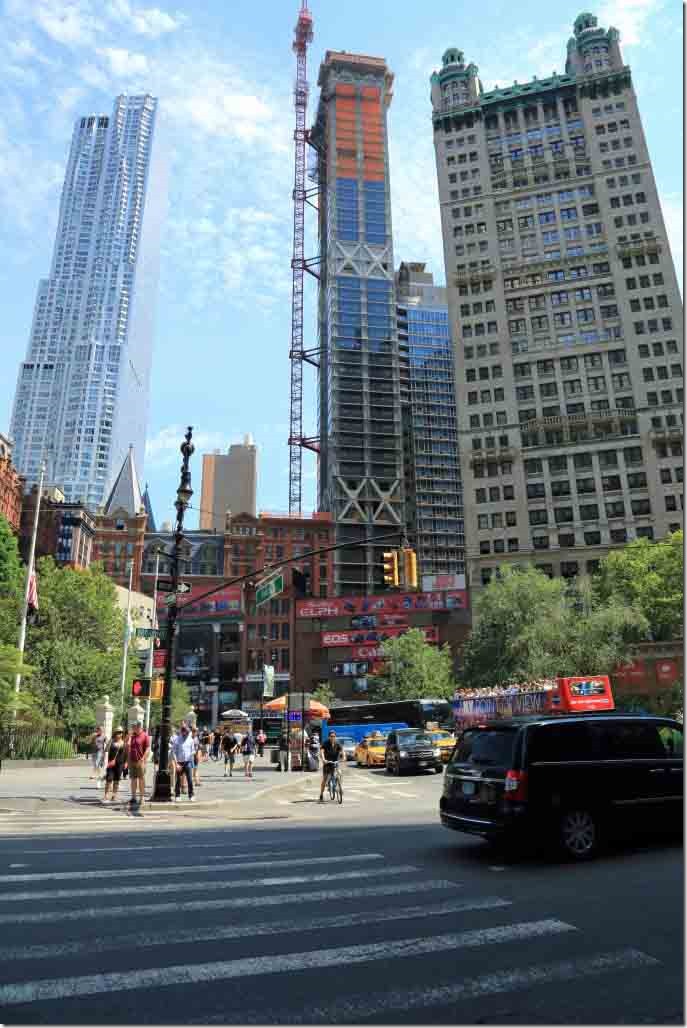 This includes some older low rise buildings, and new and old towers. This dispelled one of our myths that the downtown core of Manhattan was all high rise towers.  We continued towards the Freedom Tower on West Street, where the crowds were extensive and the queues fairly long. We headed to the queue for tickets, which took about 10 to 15 minutes, receiving tickets for 13:30, which was in 75 minutes, a pleasant surprise considering the number of people milling around. 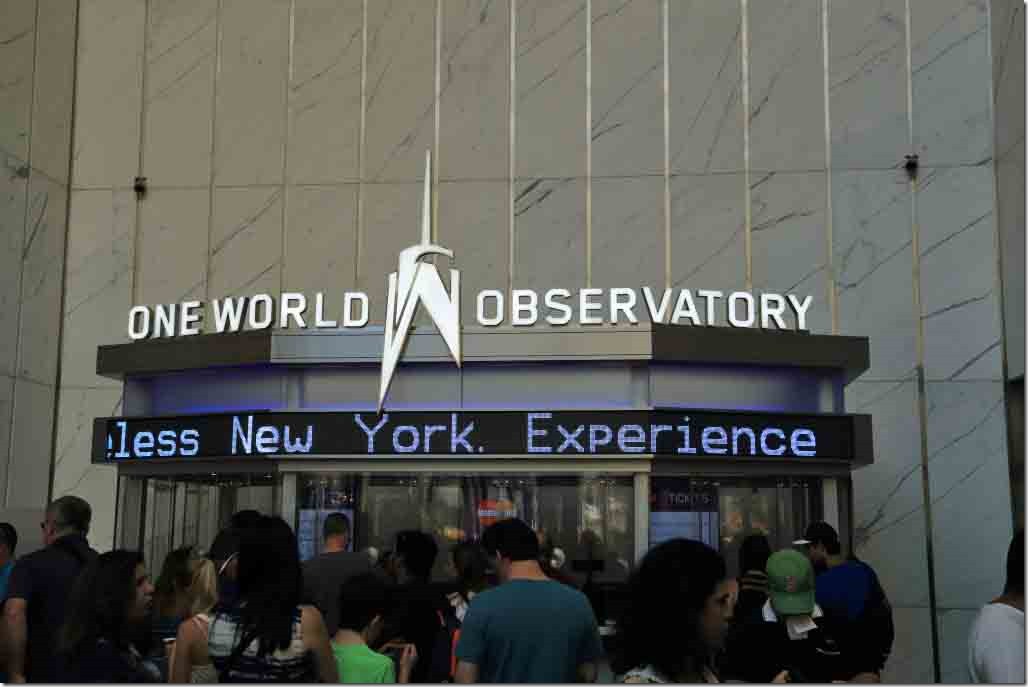 The Observatory ticket office, which is inside the building. 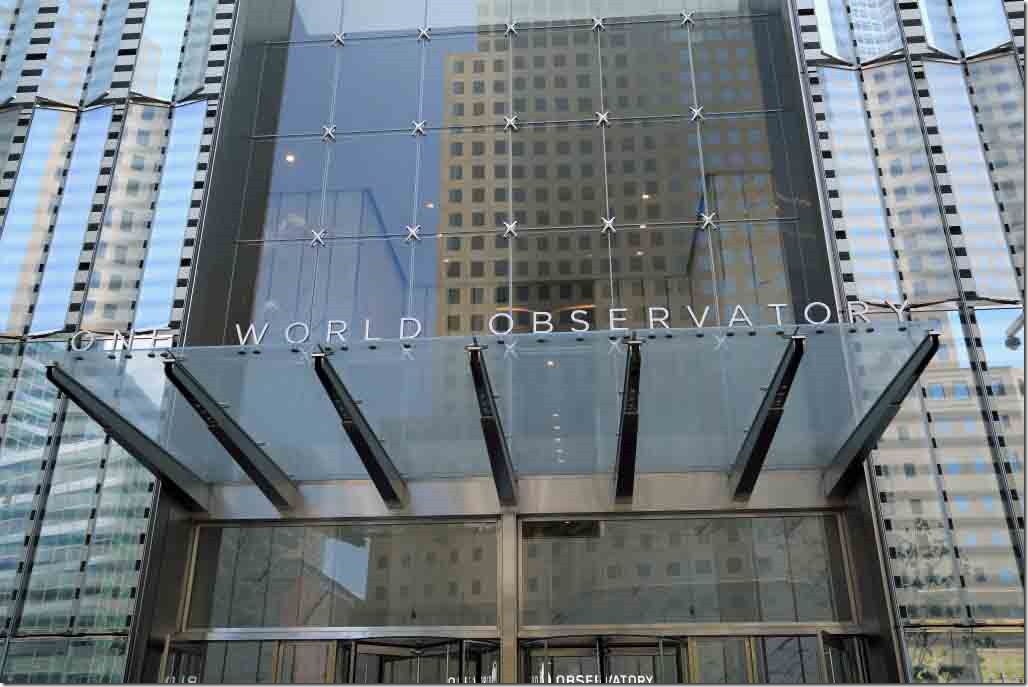 The public entrance to the Freedom Tower Observatory on the front of the building, with employee and visitor entrances on both sides.

The slightly more than an hour provided an opportunity for the highlight of our visit to New York, which was to see the World Trade Centre Twin Tower Memorials. Wow! it wasn’t a disappointment as we firmly believe it is a spectacular memorial to those that perished. The waterfalls around the footprint of each tower provide a serene environment, remembering what once stood proudly on the site. The names of each of the over 3,000 inscribed around the perimeter of each memorial, is a poignant reminder of the terrible human cost, bringing many a tear to the eye. What affected us the most was the number of references to a mums and their unborn child. This was a fact we don’t recall hearing, and with a new grandson, we found especially difficult. 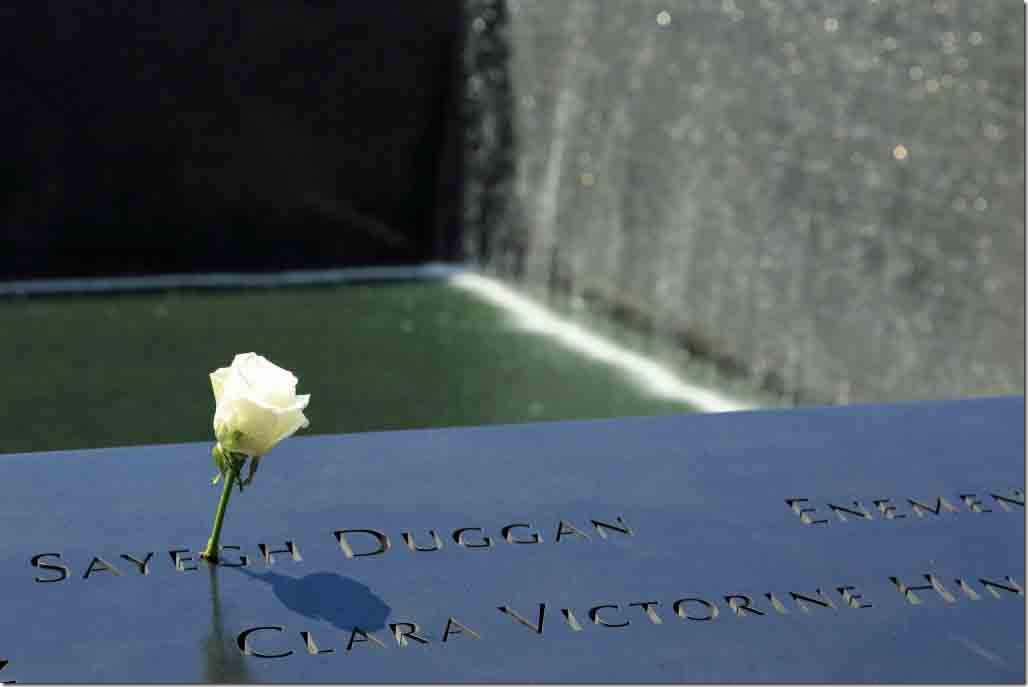 At the first memorial, containing names of the various office staff, this was the first thing we noticed, a white rose attached to one of the names, which we found extremely moving. As we walked completely around both memorials we spotted a few others, always a single white rose. 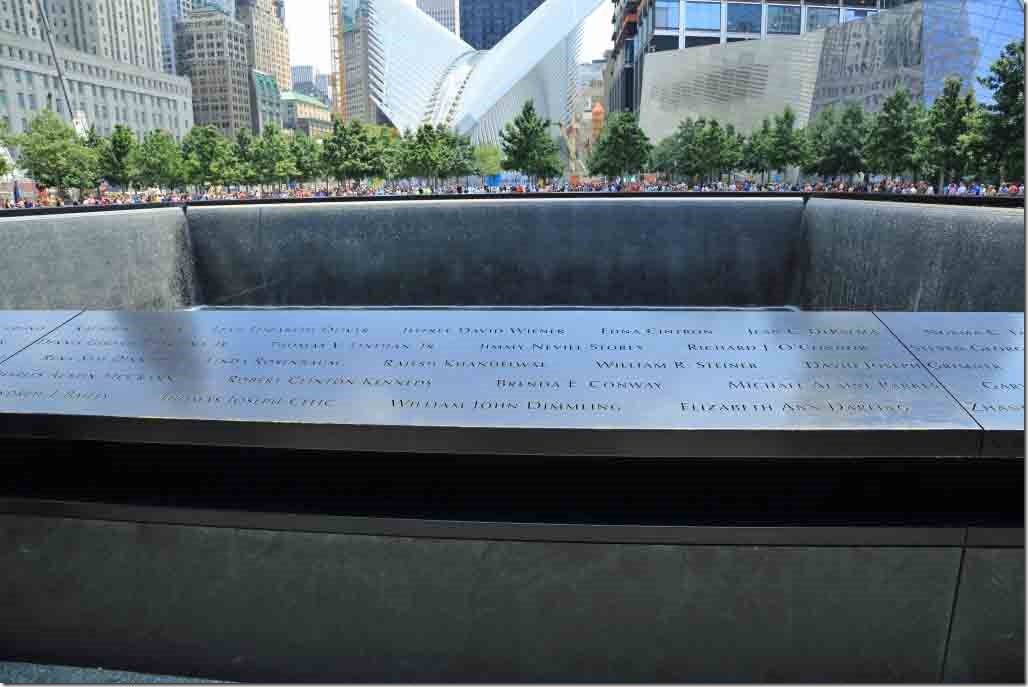 The memorials cover the foot print of the original towers and are lined by water falls on all 4 sides. Around the outside are inscribed the names of all 3,000+ who perished in the attack. 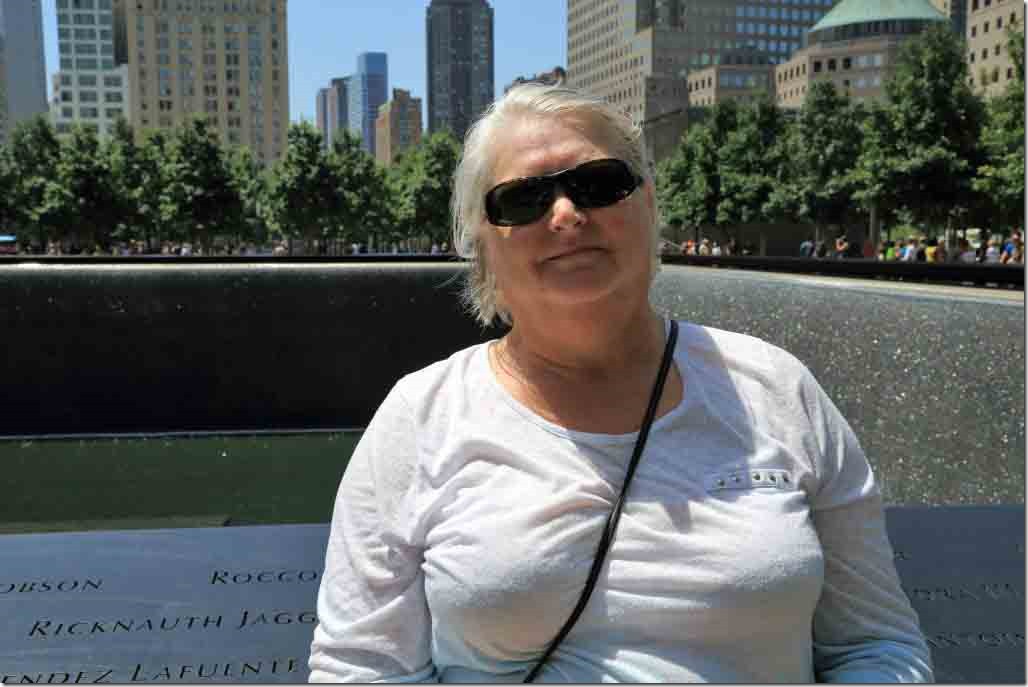 Judi in front of the memorial closest to the new Freedom Tower. This memorial has the names of all the office workers. 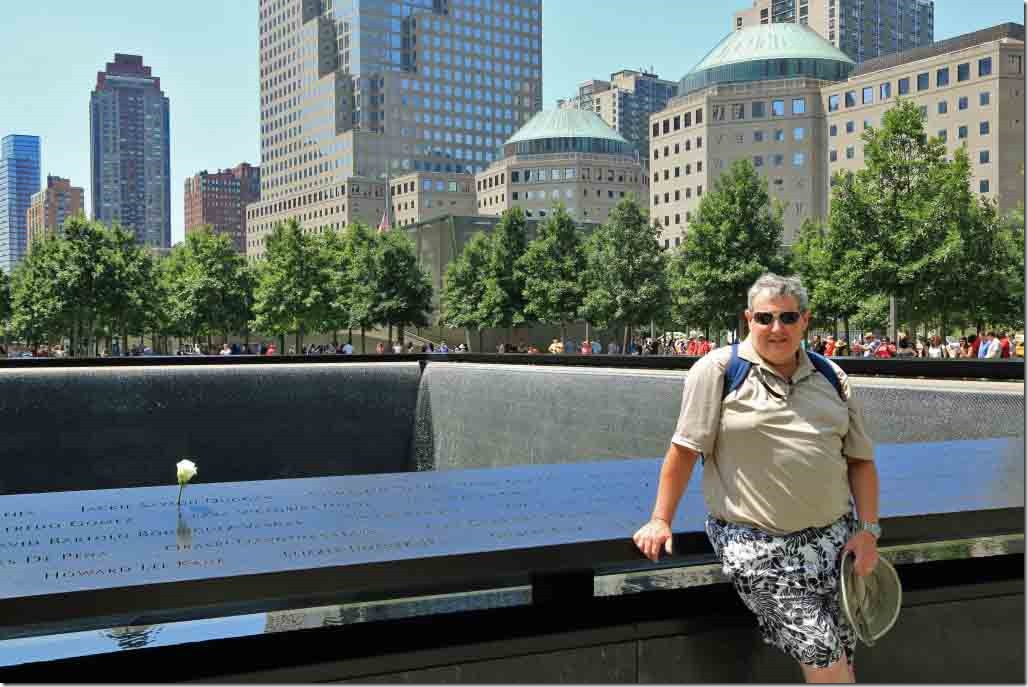 Andy at the memorial closest to the Freedom Tower, beside the single white rose. 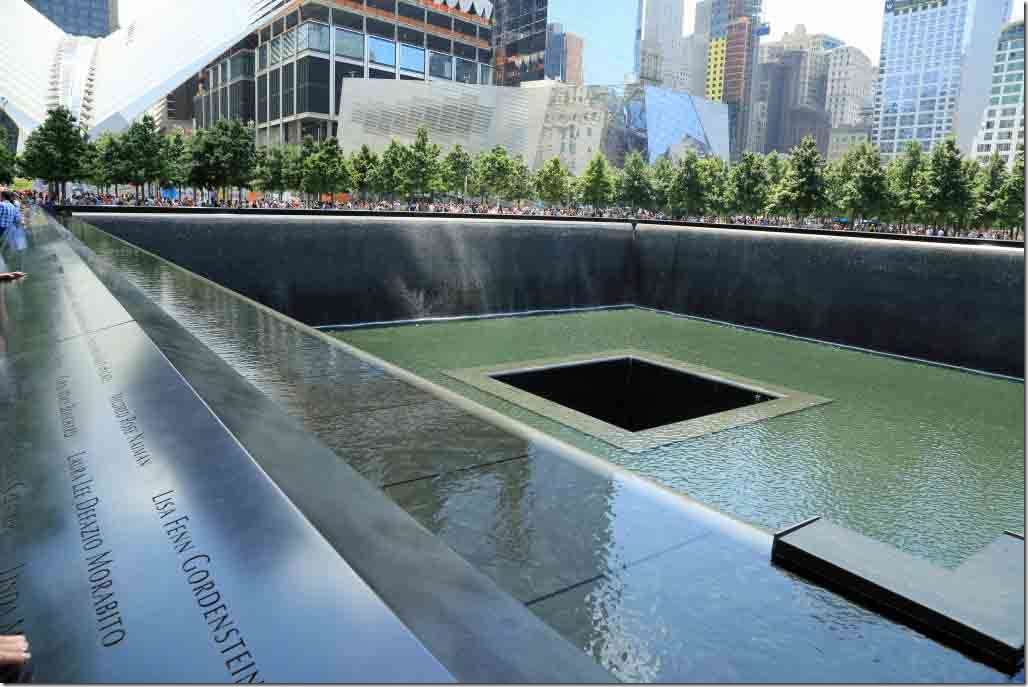 Twin Tower Memorial closest to the Freedom Tower, with the museum in the background. We wanted to visit the museum, but the queue was huge. Having walked entirely around the first memorial, we walked over to the one for the 2nd tower, immediately noting this had the names of all the First Responders. 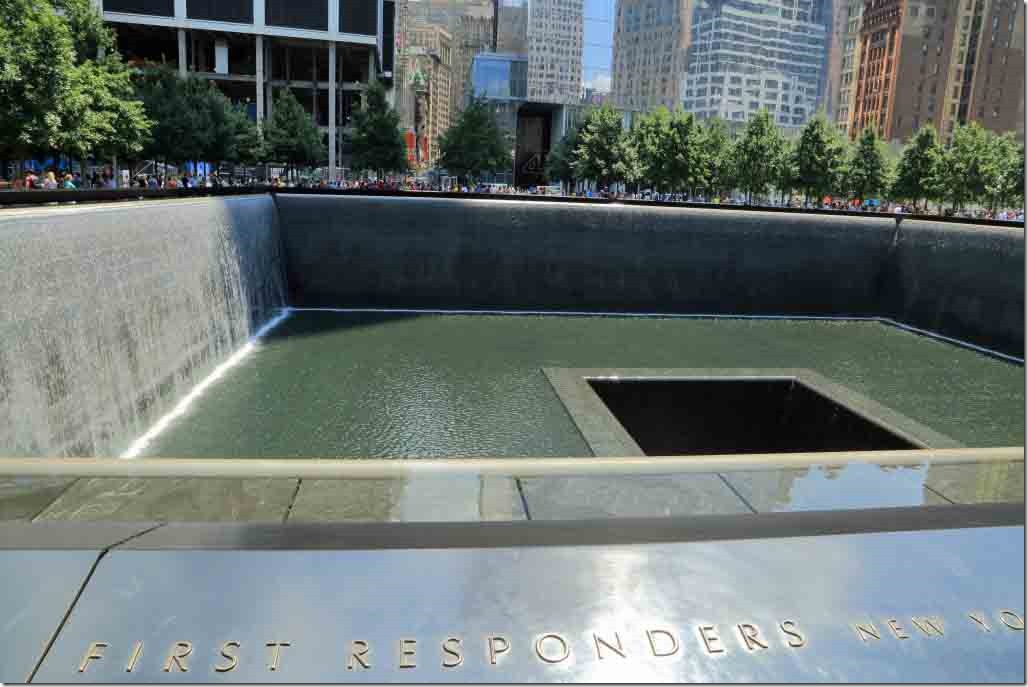 In addition to each person’s name they also included their unit or station assignment. 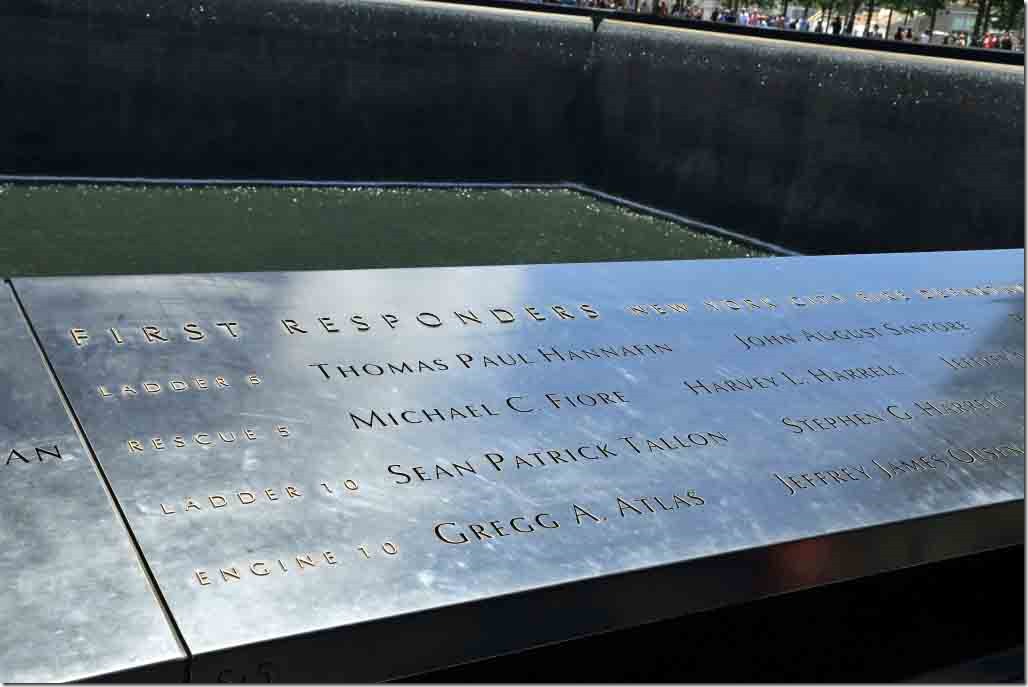 List of firefighters included in the first responders, including which station or task they were assigned to. 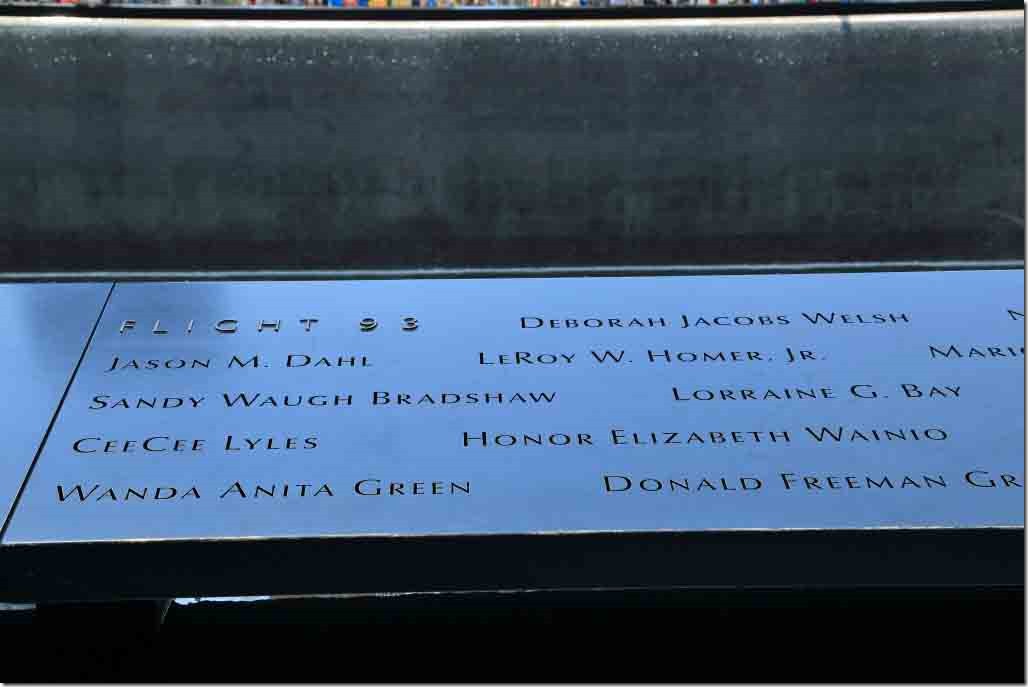 The names of the passengers and crew from the flights are also included. 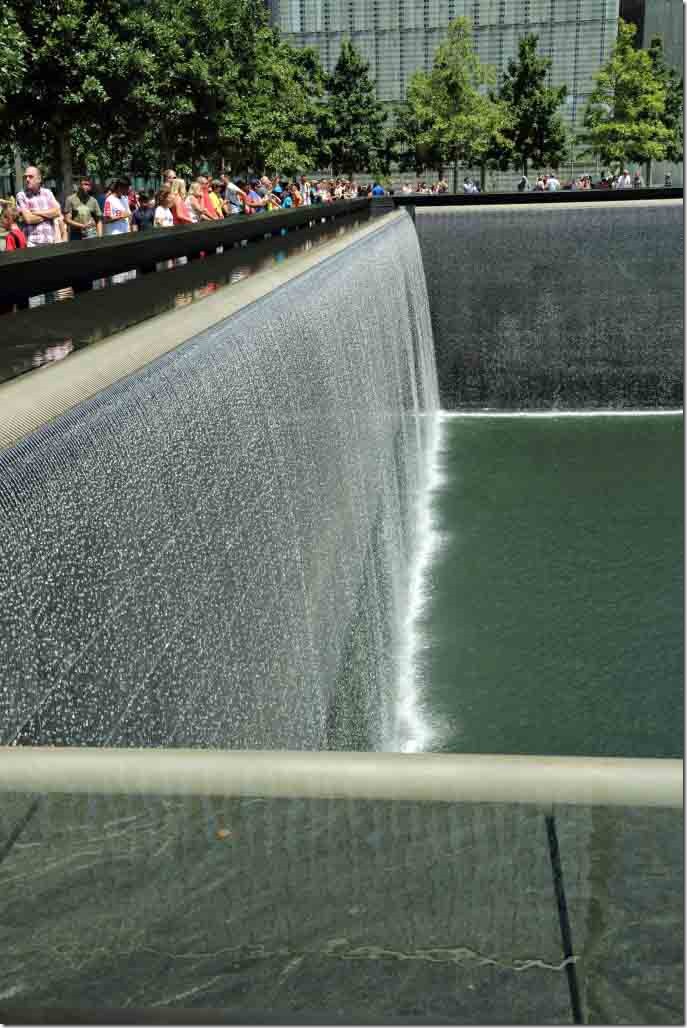 Highlighting one of the water falls with a fast shutter to freeze the water. 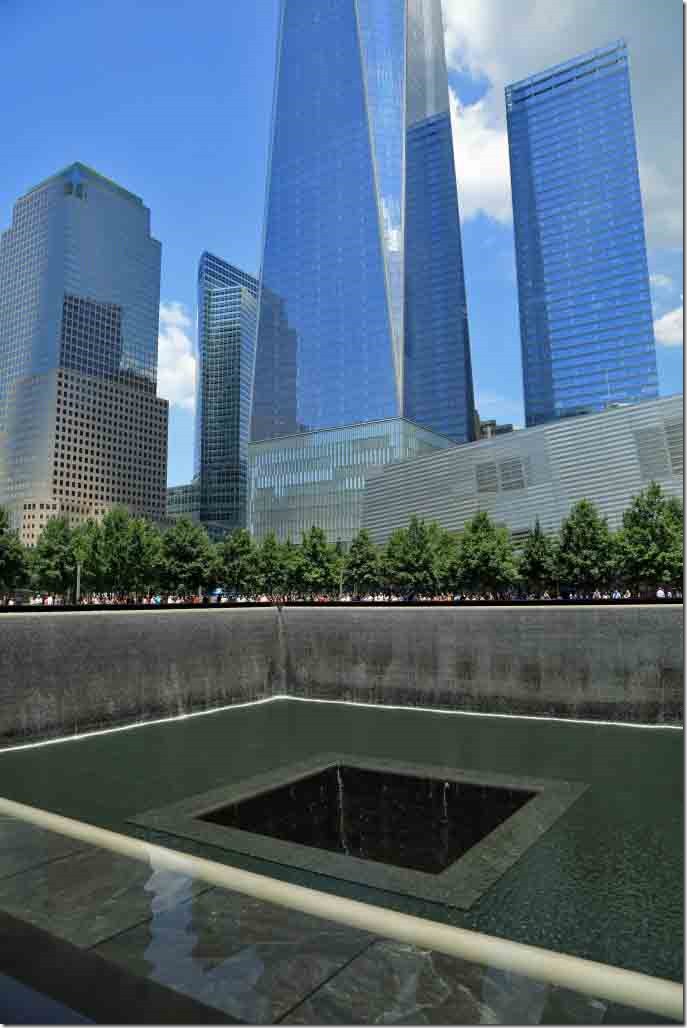 Memorial with Freedom Tower in the background. 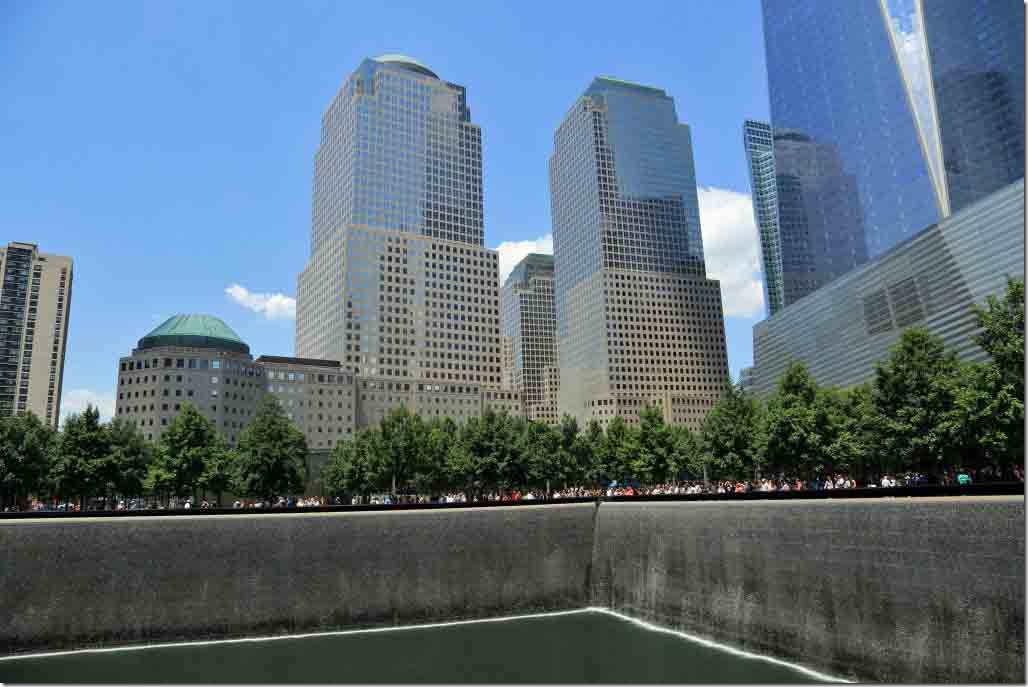 Two water curtains on one of the memorials with waterfront towers along the Hudson River in the background. 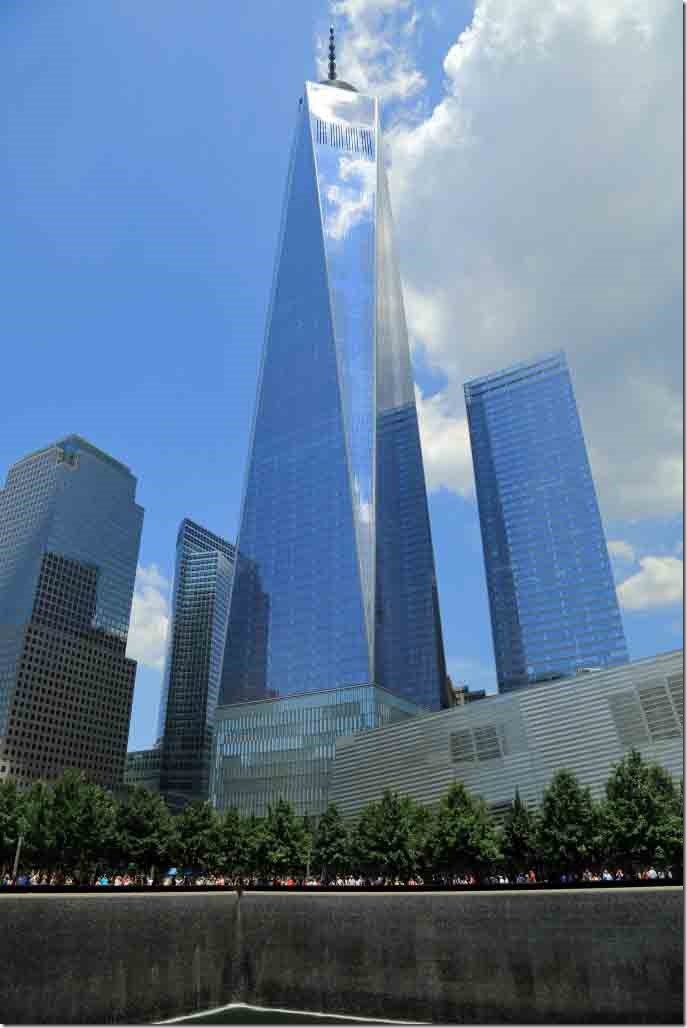 Having walked around both memorials it was passed 13:00, so we returned to the Freedom Tower, as shown above. No sooner had we arrived and they called the 13:00, 13:15 and 13:30 tours, with a separate line for each. When we reached the beginning of the queue we found the 13:00 empty and the 13:15 almost empty. Our queue started moving shortly, with us entering the building about 13:15 or 15 mins early. Once you enter the building you descend to the basement level where you go through security screening, then walk through some fake rocks to the lifts. 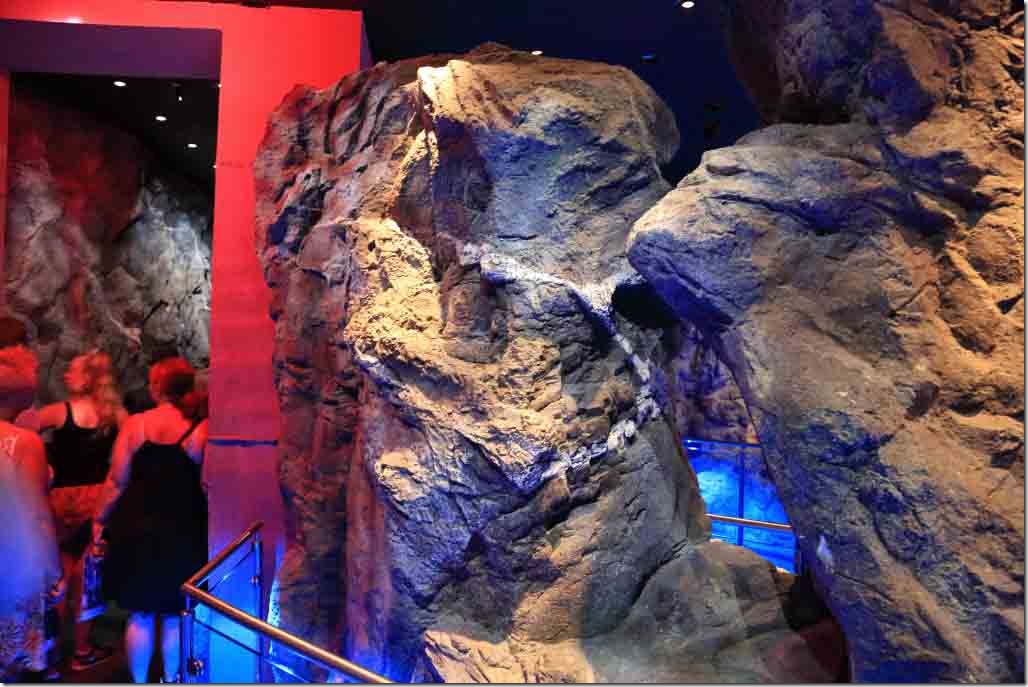 Basement displays enroute to the lifts. After a short wait, we piled into lift number 5 for the approximate 60 sec hypersonic journey to the 102nd floor. The lifts are amazing, having video displays on three sides, which display:

On departing the lift we were shepherded into a theatre, where you stand in multiple rows along a long railing. They provide a quick photo montage of NY, which culminates in the screen being raised to provide the first glimpse of the city from atop the tower. Departing the theatre you descend one floor to the restaurant/cafeteria, where we had a soft drink and bakery item each, at a cost of US $23, which is currently almost Can $30. Ouch!!!

After the snack we descended another floor and were immediately led to the photographers. What a joke, as they we using very basic point and shoot cameras, but charging professional photographer prices. Being a camera snob, with my Canon 5D Mk III hanging from the shoulder, we declined a photograph. Finally we reached the 360 degree observation deck, which unlike the original towers is completely inside. On the original towers the observation platform was on the roof. Had I thought prior to departure, I could have uploaded a couple of my photographs from 1979 from atop the original towers. 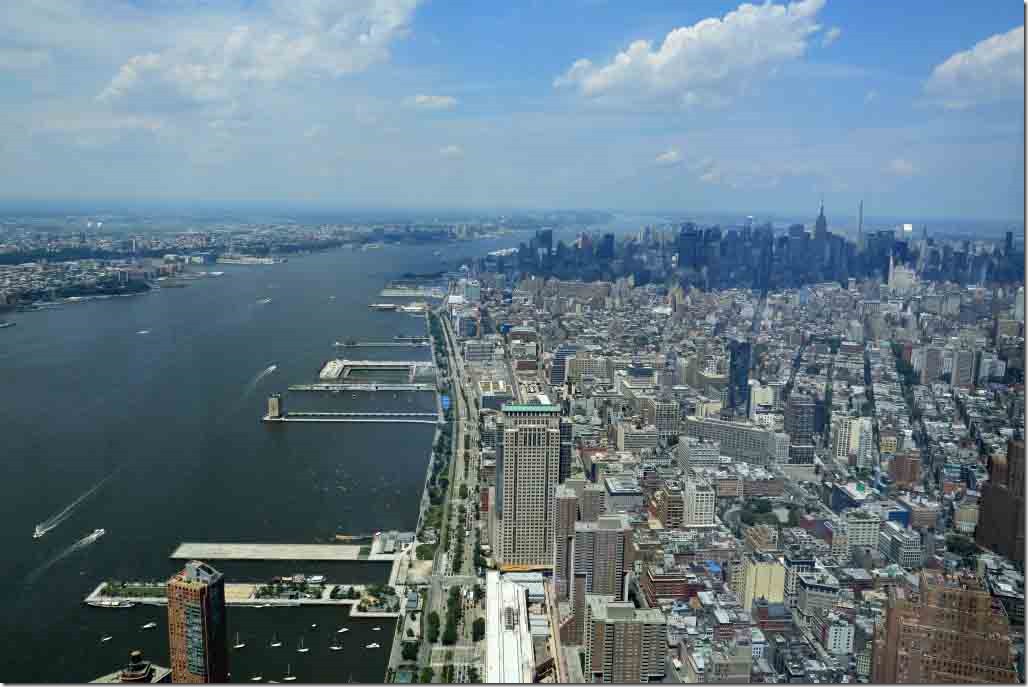 Looking up the Hudson River, which we sailed up yesterday, with the Sea Princess stern visible in the distance. 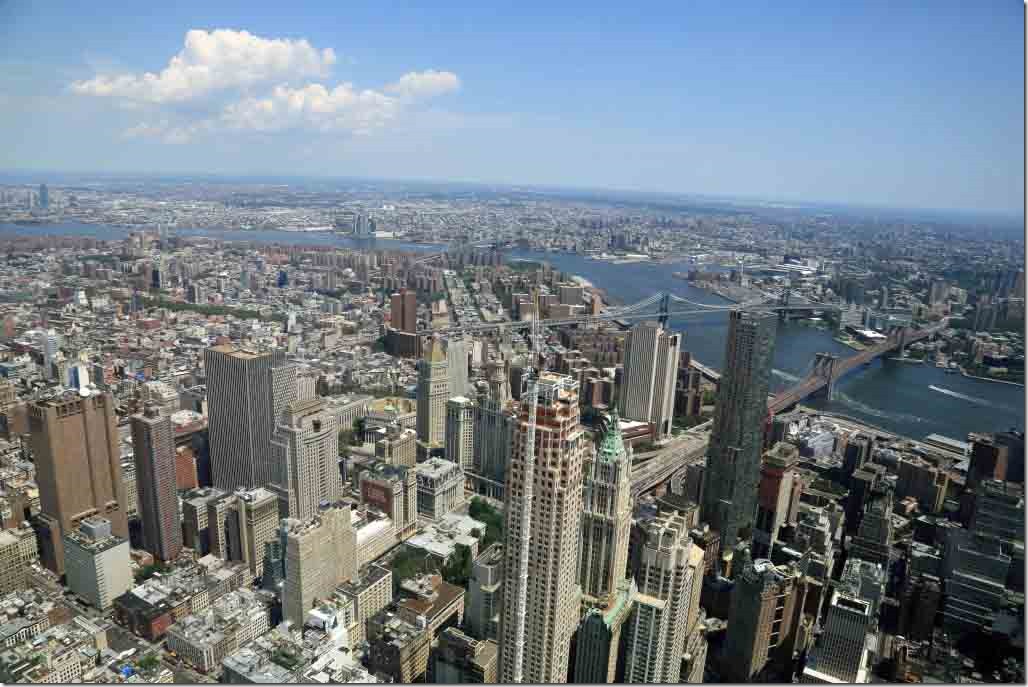 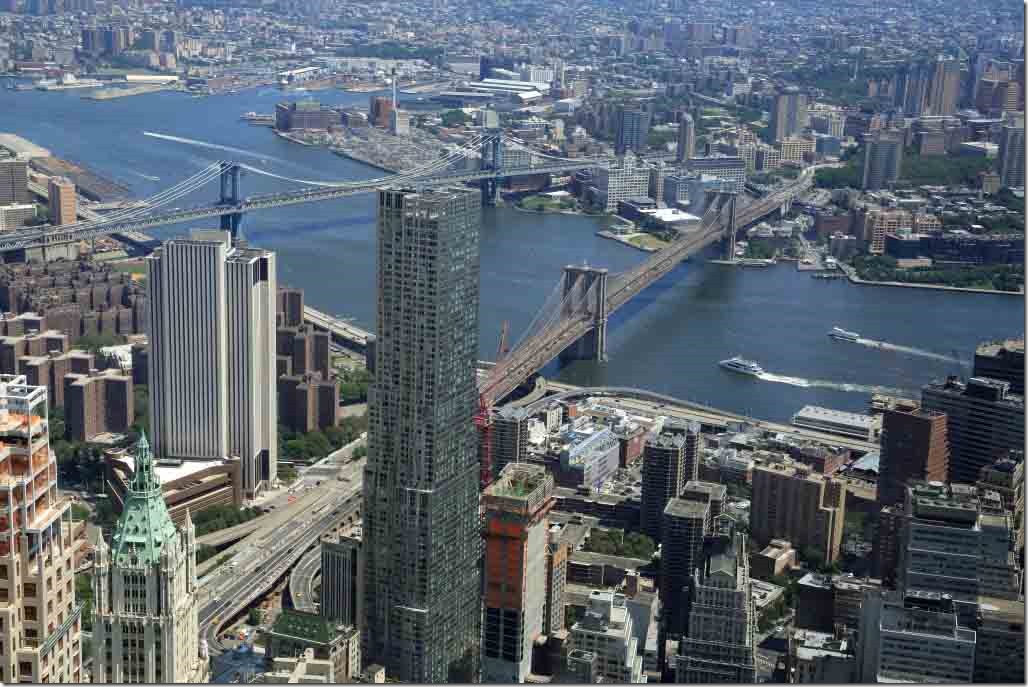 Close up of the East River bridges, from right to left – Brooklyn Bridge and Manhattan Bridge, with the locals remembering the order by “BMW”, as the 3rd bridge is called Williamsburg Bridge. 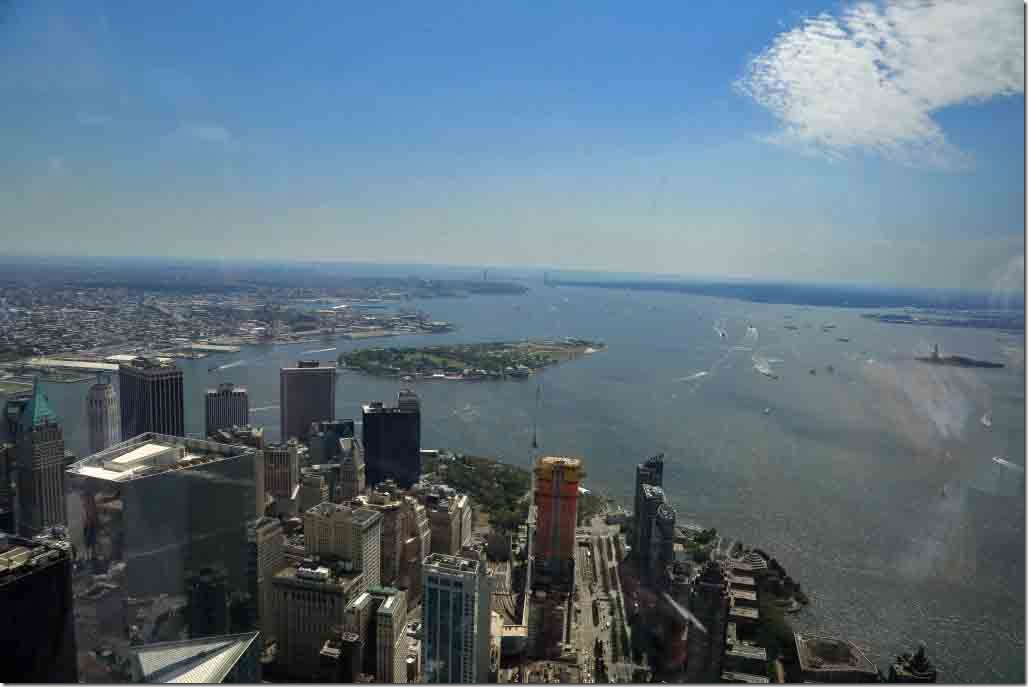 Looking across southern point of Manhattan out to the Verrazano Narrows Bridge, Staten Island and Statue of Liberty. This is the route we sailed into the harbour yesterday. 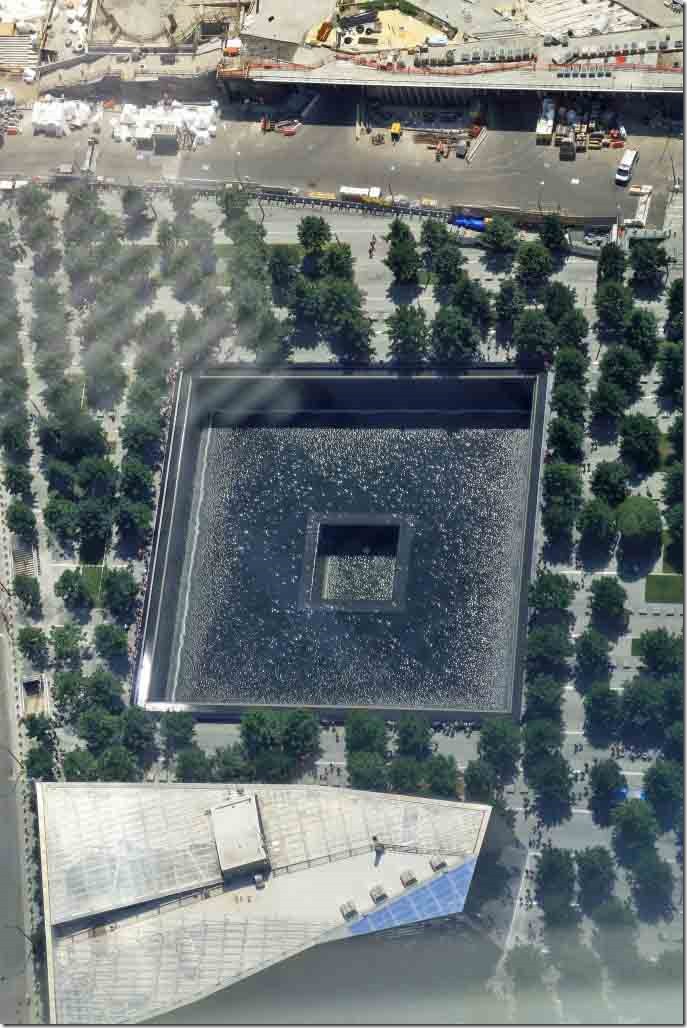 The final photograph from atop the Freedom Tower is looking down on one of the memorials to the twin towers, with the memorial covering the footprint of the original tower. A very moving end to our Freedom Tower visit.

On descending the lifts they have a different film. They show the lift sliding outside the building and then descending in a spiral around the exterior. As you arrive at the basement the lift slides back inside and the door opens. Again, don’t forget to swallow during the descent. Departing the building we completed the short walk back to stop #11, taking the bus to stop #14 on 8th Avenue. Our first stop was at Macy’s, of “Miracle on 34th Street” fame, it is also the largest of the company’s stores. We entered, walked around a little then headed out. 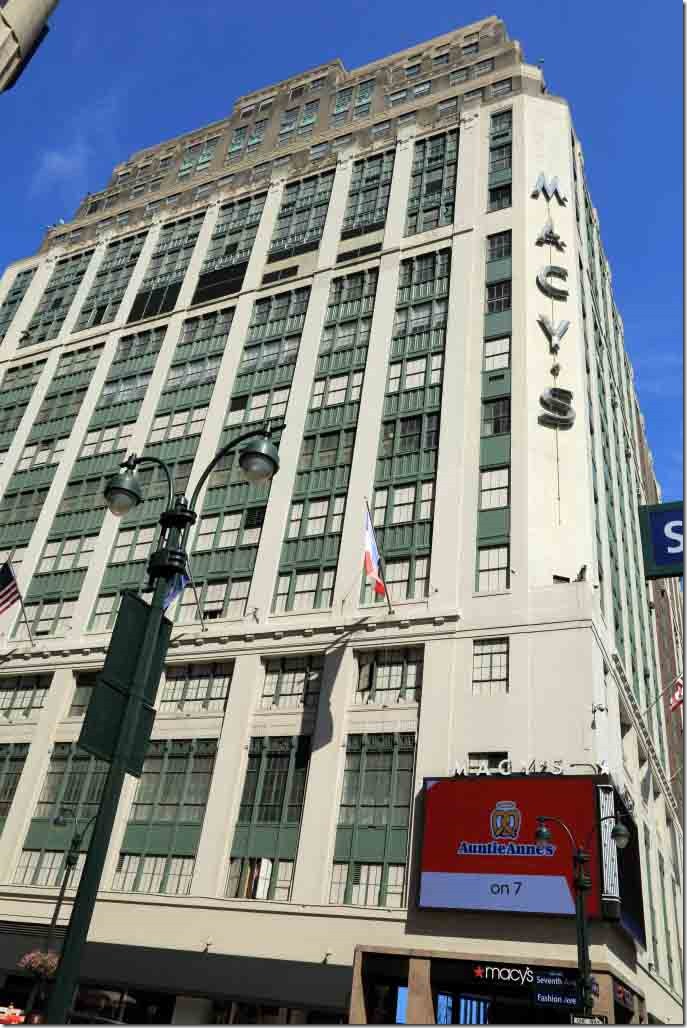 We returned to 8th Ave, stopping at a couple of souvenir shops for Judi to acquire the obligatory mementos of NYC. Being a little famished, we decided to try the pub Judi spotted from the bus – Beer Authority. Wow, great choice. I was in absolute heaven with the choice of draft beers, almost like a child in a sweetie shop. The first pint was their only “Real Ale” or cask conditioned ale, but it disappeared before the camera could auto-focus, so you have to settle for a picture of the 2nd pint, a very pleasant oatmeal stout. 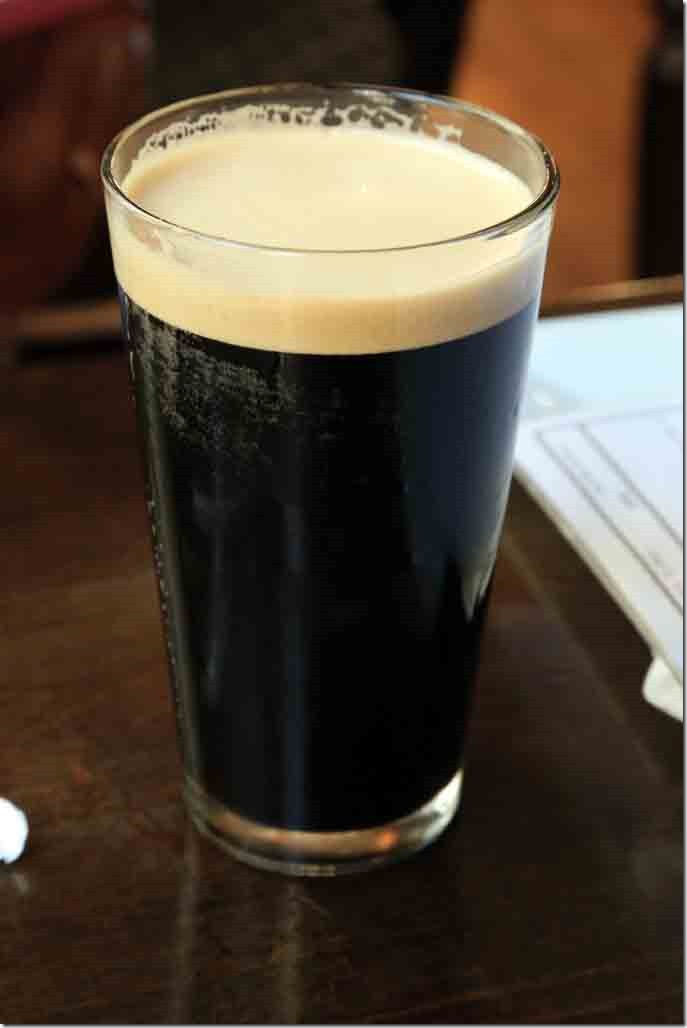 Yep, I even managed a sip of this pint before the camera got focused.

For meals, I had the shepherd’s pie and Judi the roast chicken. Both our meals were exceptional and varied from the ship’s food in that they were served piping hot and were huge portions. Judi’s chicken was a 1/2 chicken and was cooked to perfection, fully cooked, but still with lots of moisture. 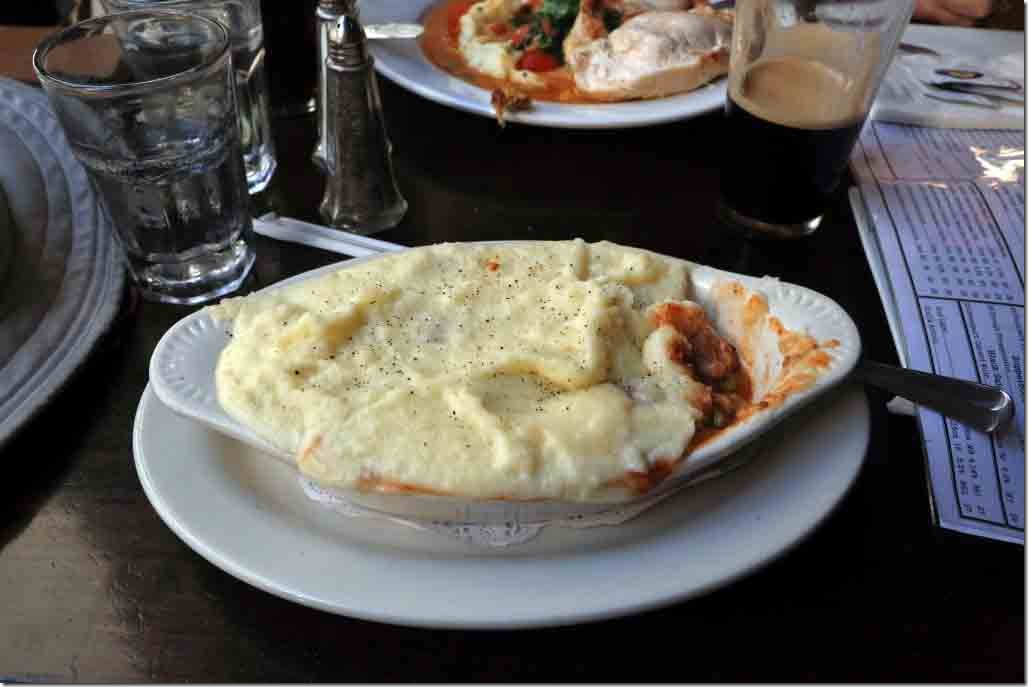 After a 3rd pint, well they are only the tiny U.S. version of a pint, so it really was just over 2 real pints we headed back out to 8th Ave, finding a Pharmacy. We picked up a few things and on heading to the checkout noted a large queue and a single cashier working at dead, dead slow ahead. The lady behind us was getting irate asking for more cashiers and then the manager. On account of the terrible customer service we simply put down the basket and took our business elsewhere. Unfortunately this was not our only experience of poor customer service in NYC.

To summarize our experiences, NYC has many great attractions, many of which we missed today and would like to visit in the future. However, it is similar to any big city with incessant noise and almost constant sirens. In addition, we found it terribly dirty, with the walk along 8th Ave smelling like a sewer, way too often. I would comfortably say that with the exception of Ground Zero, the areas of NYC that we visited are the dirtiest of any place we have visited on this cruise.