Since we arrived early in New York last evening, we have already completed the immigration formalities and everyone is free to head ashore at their convenience. We have signed up for the 1-day Hop On-Hop-Off bus through the ship, which includes a shuttle to/from the ship and bus stop for both uptown and downtown loops. You can’t possibly see all of New York in a single day, so decision time – sit on the bus for about 5 hours and complete both loops or complete one loop, get off and check out a couple of sights. Due to the number of photographs I will split the today’s tour into two posts.

Our tour commenced at 07:30, so we set the alarm for 06:30. After a meagre 5 hours sleep we trudged up bleary eyed for breakfast. We enjoyed breakfast with a panoramic view of the New York skyline, then headed down to Princess Theatre for the tour and again were amazed at the conduct of some of our fellow passengers.

Assigned the middle section of the theatre, we were directed down to the front for a seat. The front row was almost filled, the furthest 6 seats were full, then 2 empty and a single chap sitting in the closest seat. Obviously he figured they would unload from the passageway we entered and he would be first out. Alas, he screwed up as they exited from the other end, so rather than being first, he was 8th. We noted a similar situation on the other tour, with 2 couples sitting at the end of the 2nd row blocking off the other 4 seats, making others walk in front of them to access the seats. Getting in front of 4 others must be really important to some, as if I had to squeeze by them, my size 11 shoes may inadvertently land on some toes. I might even have had to go in and out a few times to get the point across.

Purchasing the Ho-Ho bus through the ship incurred a small premium, but it was definitely worth it. We traded the ship tickets for bus tickets in the terminal and on arriving at the street found an actual Ho-Ho bus rather than a shuttle. We headed upstairs for a seat and completed the entire downtown loop on this bus, which had an excellent guide. Similar to our experience in Dublin, Big Bus has live guides, not a taped commentary. 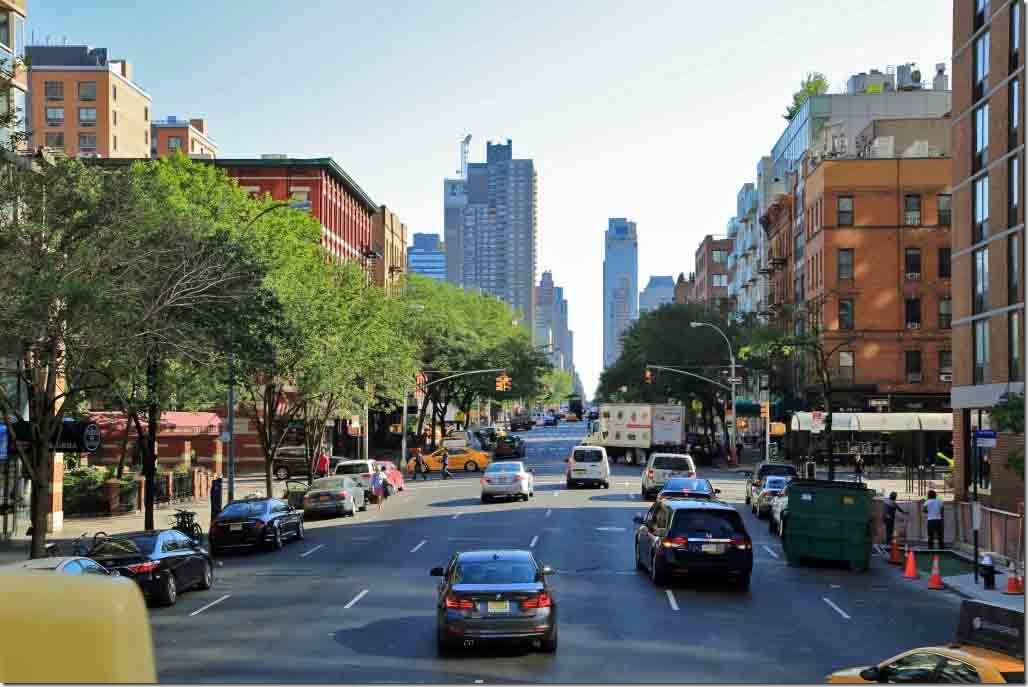 On departing the ship we headed up to 8th Avenue, joining the regular route at stop # 1, which is located at the M&M Store on 7th Avenue and W48th Street. The above photograph is one of the wider tree lined streets off 8th Avenue, while still heading to the starting point from the ship.

Still heading to the starting point this is one of the streets in the theatre district. After a brief stop at Stop #1 outside the M&M store we headed down 7th Ave, turning left onto W42nd Street, when we passed the tower pictured below. 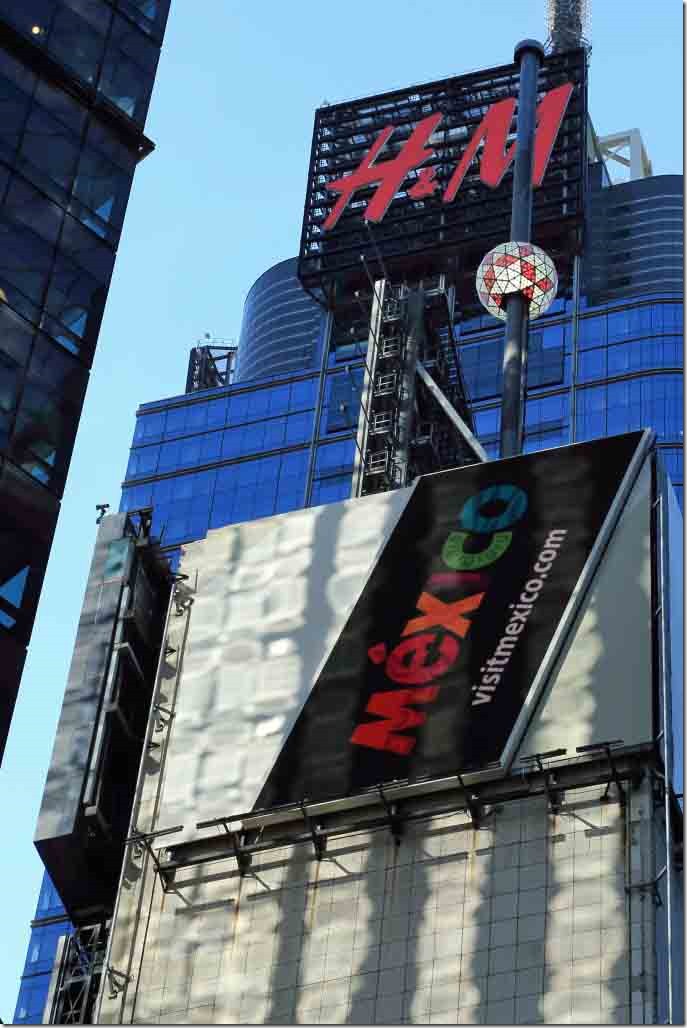 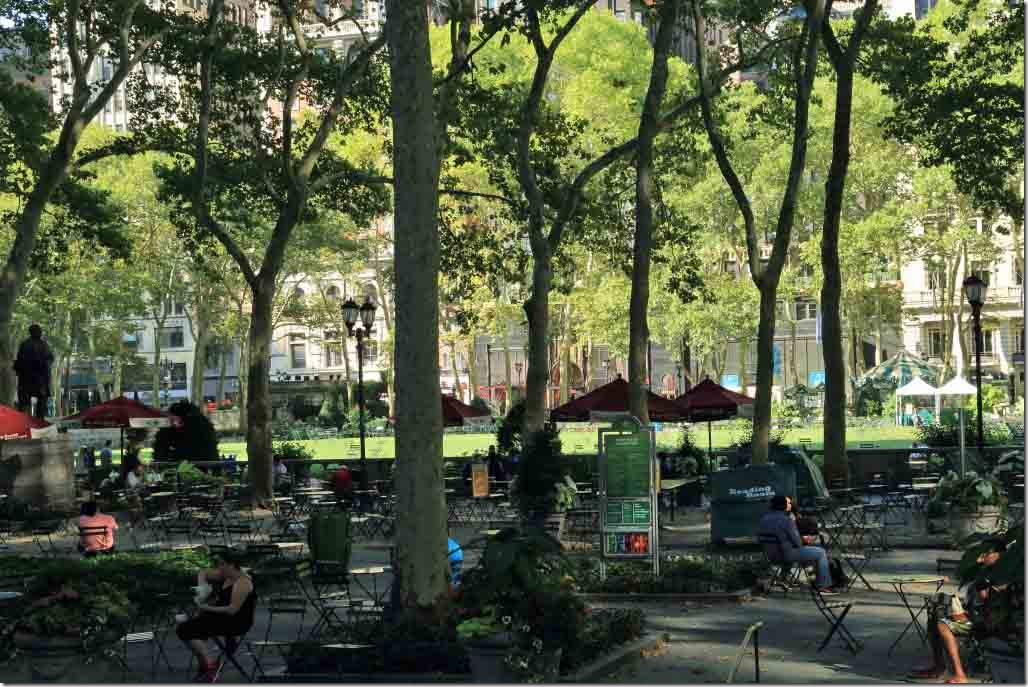 Bryant Park, which is between 5th and 6th Avenues on W42nd Street is an amazing oasis, amongst the busy and congregated buildings of bustling New York. In the background can be seen an amazing sun drenched lawn and in the foreground a nicely shaded patio. 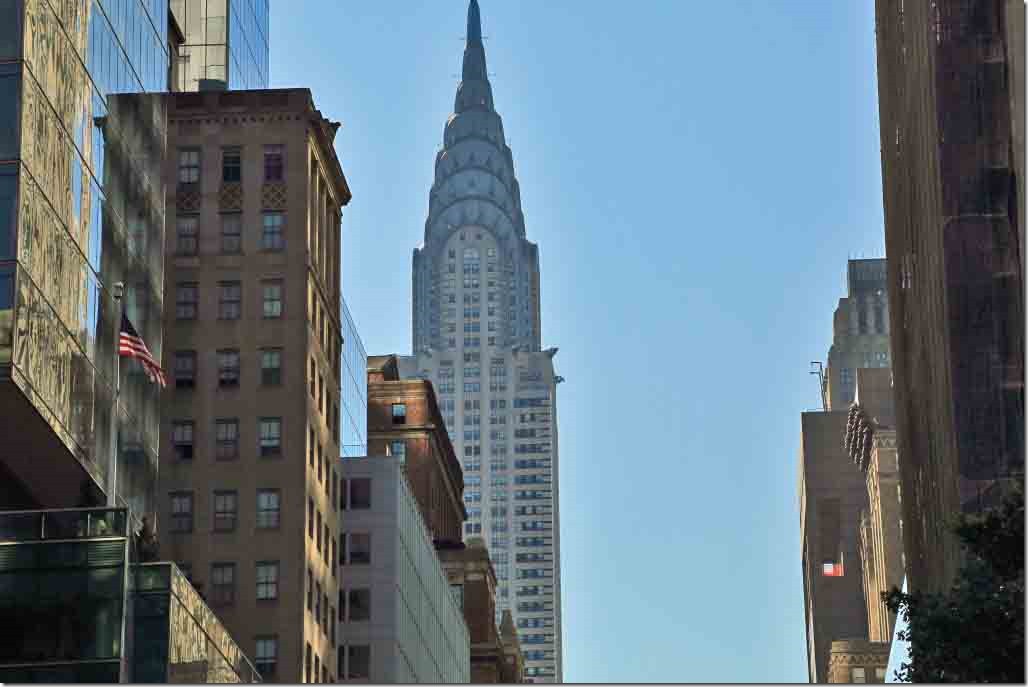 As we turned onto 5th Ave, this is looking north along 5th Ave which has numerous high end shops. 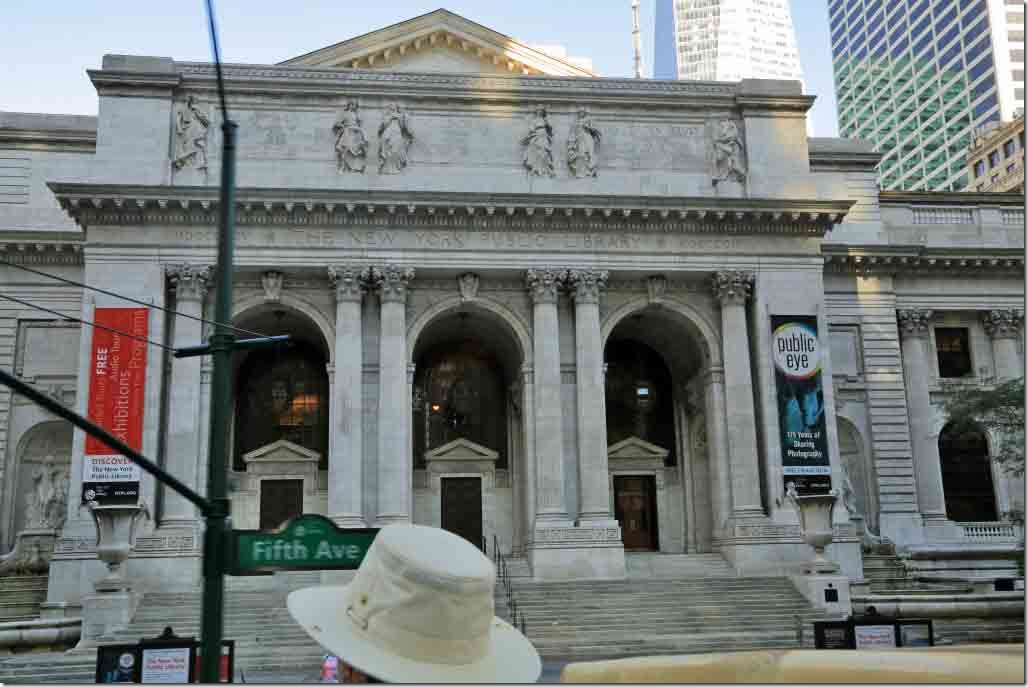 New York Public Library at the corner of 5th Avenue and W42nd Street. This library is purely for research, as you cannot borrow books. Another regular library was located about 1 block down 5th Avenue where you can borrow books. Stop # 3 is at 5th Ave and W37th Street and is for the Empire State Building and Korea Town. 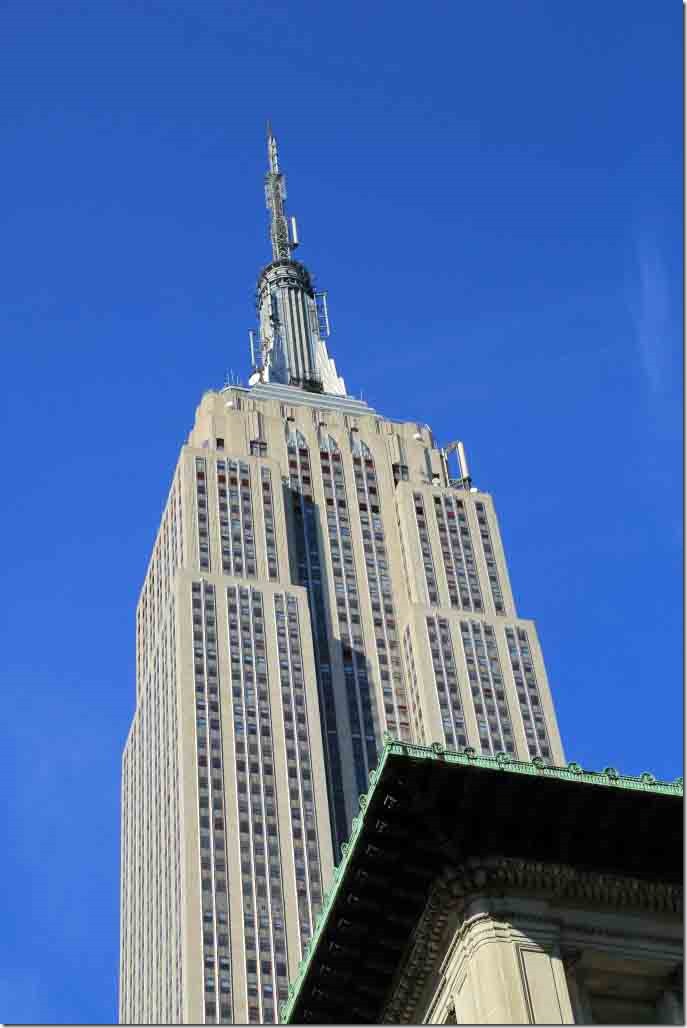 Two shots of the Empire State Building, the 2nd with the name over the entrance. At this point the bus was completely full on the top deck, so further photographs were rather challenging. We continued down 5th Ave towards the Flat Iron District, which was stop #5, located at 5th Avenue and W23rd Street.

Unfortunately, I have to use maximum JPG compression to minimise satellite upload times, so I can’t guarantee you will be able to see the detailed stone carving on the hotel to the left, especially on the top floors. The next few stops really didn’t have much of interest. Stop #6, located at 5th Avenue and W 4th Street was for Union Square. We continued down 5th Avenue, but it  stops at Washington Square, so we turned left onto E8th Avenue, as 5th Avenue is the boundary for determining east and west. Stop #7, located at the corner of Mercer Street is for Greenwich Village, has numerous NY University Buildings in the vicinity. The guide mentioned NYU has no actual campus, but consists of numerous individual buildings located around Manhattan.

South of Houston Street is an area that was safe for ladies to shop on their own, so one building has 6 ladies carved on the front, as seen above. At Canal Street we turned left and after a short distance turned right onto Lafayette Street, heading towards the civic buildings. The next stop was #10, for the Chinatown, which was a few blocks away. 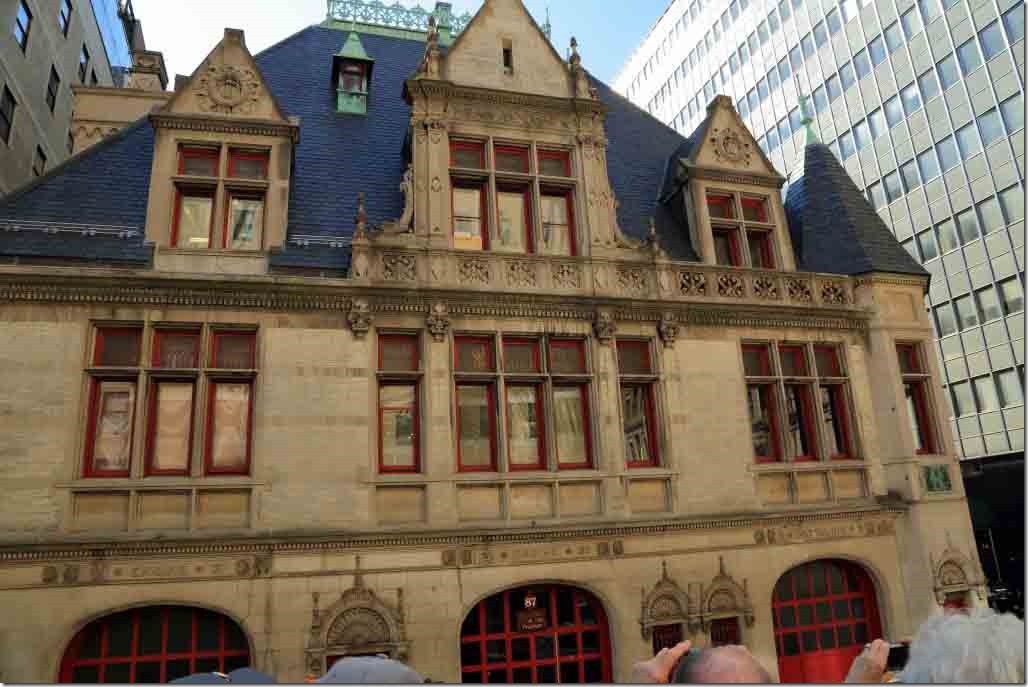 Fire Hall #31 located just before the civic buildings area. Continuing along Lafayette we passed through the array of civic building before arriving at stop # 11, located at Park Row and Beekman Street. This is the stop for the Brooklyn Bridge, City Hall and Ground Zero.

The United States Court Building with the stairs that are used on filming the TV program Law & Order. 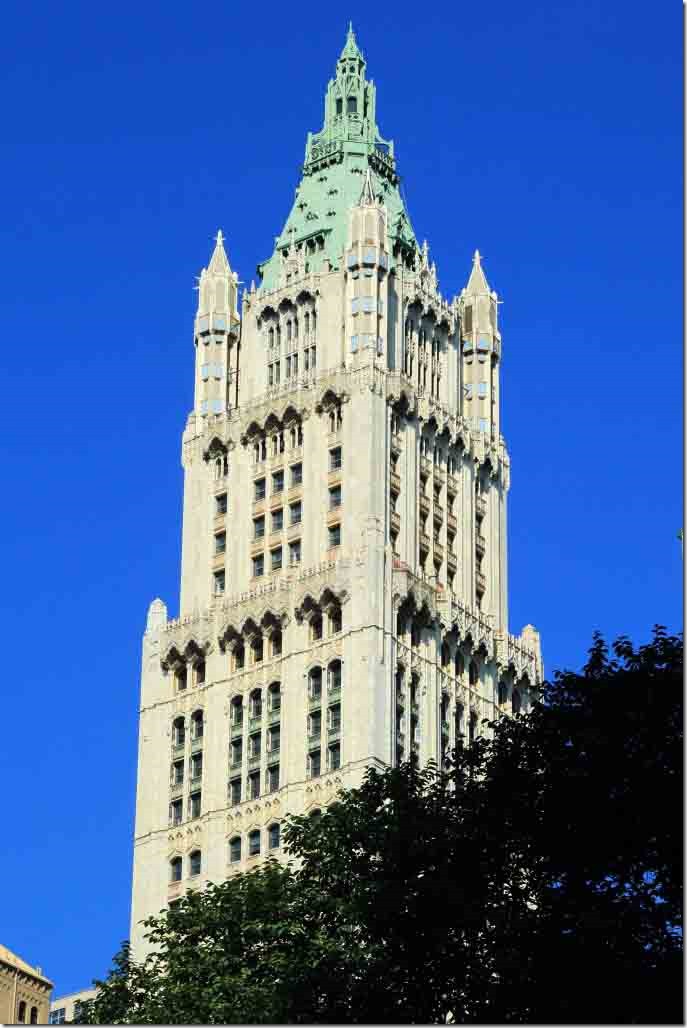 Older tower adjacent to the Civic buildings that has amazing intricate stone carvings. 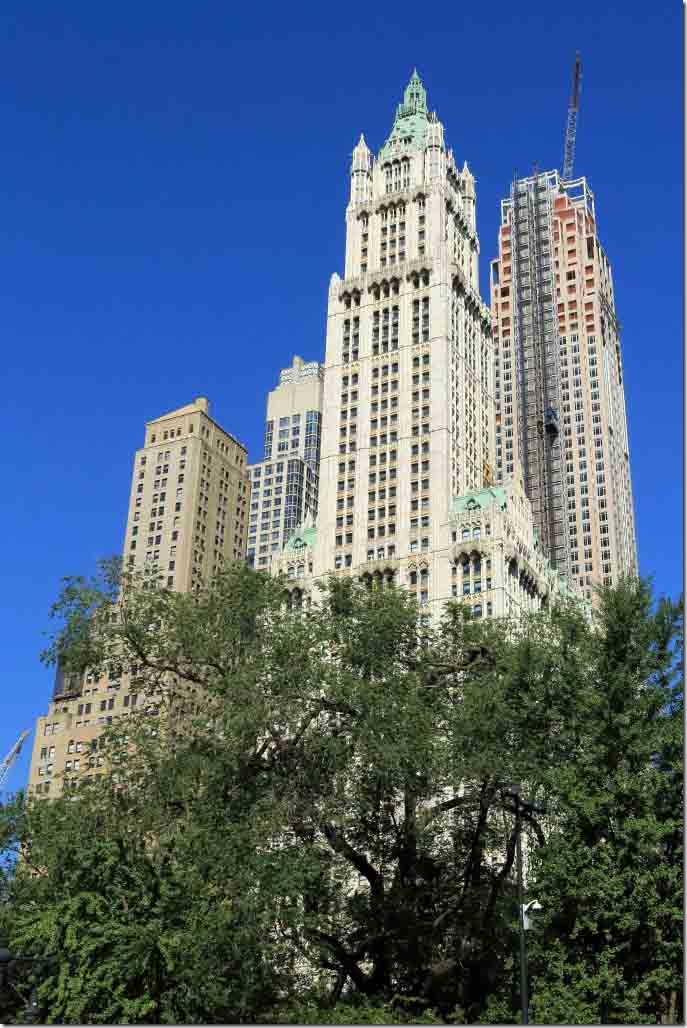 The same older tower, but this time captured with the surrounding array of newer buildings. Shortly after departing stop #11 we returned to Broadway Street.

New York City Hall, which is the oldest municipal building in the USA that still houses the original local government functions. Continuing down Broadway we passed Wall Street, getting a brief glimpse of the NY Stock Exchange, then we passed the bull statue.

Next we took a loop around Battery Park, which is a major construction zone, which we believe is still resulting from the tropical revolving storm that hit the area a couple of years ago. 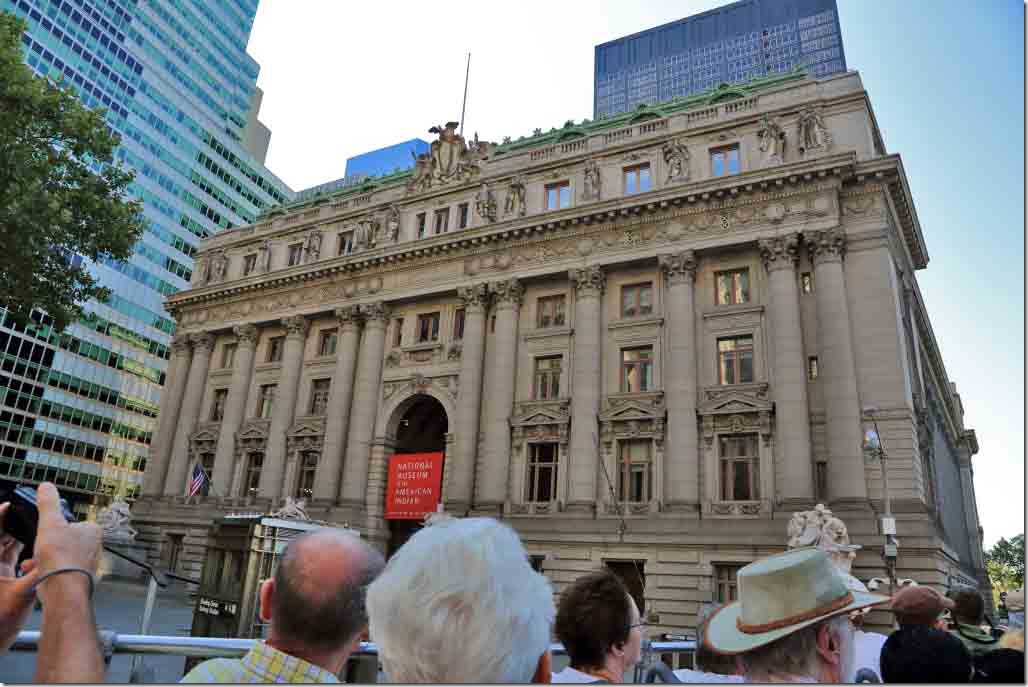 National Museum of the American Indian, close to Battery Park. Stop #12, located at Battery Place and Bridge Street is the stop for Battery Park, Wall Street and the Staten Island Ferry. On completion of the trip around Battery Park we headed onto West Street, which runs parallel to the Hudson shoreline along the West side of Manhattan.

The Freedom Tower that is built adjacent to the memorials to the fallen Twin Towers. Continuing along West Street we passed numerous old piers that have been converted into alternative uses – city impound lot, golf driving range, sailing/kayaking, football and trapize school, etc. The entire river bank is a walkway with lots of trees and additional piers for pedestrians that jutt out into the river.

Tree lined walkway along the river with a walking pier with tent at the end for shade.

Driving along West Street we passed the neighbourhoods of Tribeca, Hudson Square, The Village/Greenwich and finally the exclusive Chelsea, named after the equally exclusive area of London, UK. We turned off West Street at W18th Avenue, noting the following park.

Driving along 10th Ave the guide pointed out the following building.

Chelsea prices are commensurate with the exclusiveness of the area, with rents for an apartment about $5,000/month and purchase prices of $2 – 20 million. Ouch!!! Stop #13 is located at 10th Avenue and W21st Street and is for the Highline, an elevated walkway.

Another interesting shaped building in Chelsea with a portion of the Highline walkway in front of the building. We turned right onto W22nd Street, which is tree lined with huge apartment buildings. 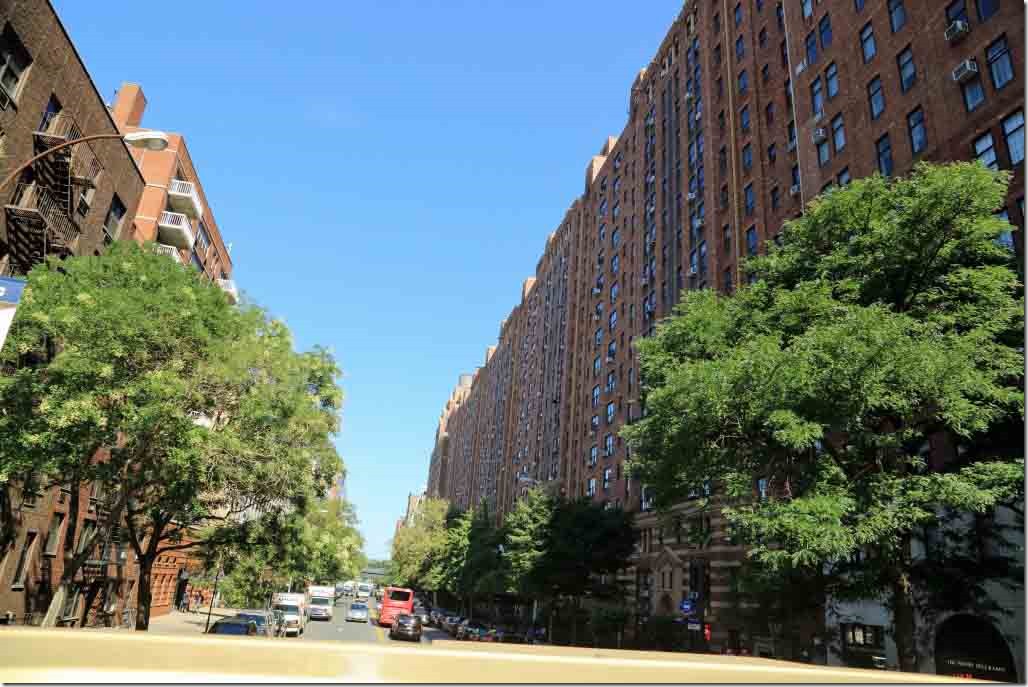 Looking back down W22nd Street, with the building on the right side being one huge apartment building. The next turn was left onto 8th Avenue, where we passed Madison Square Gardens. 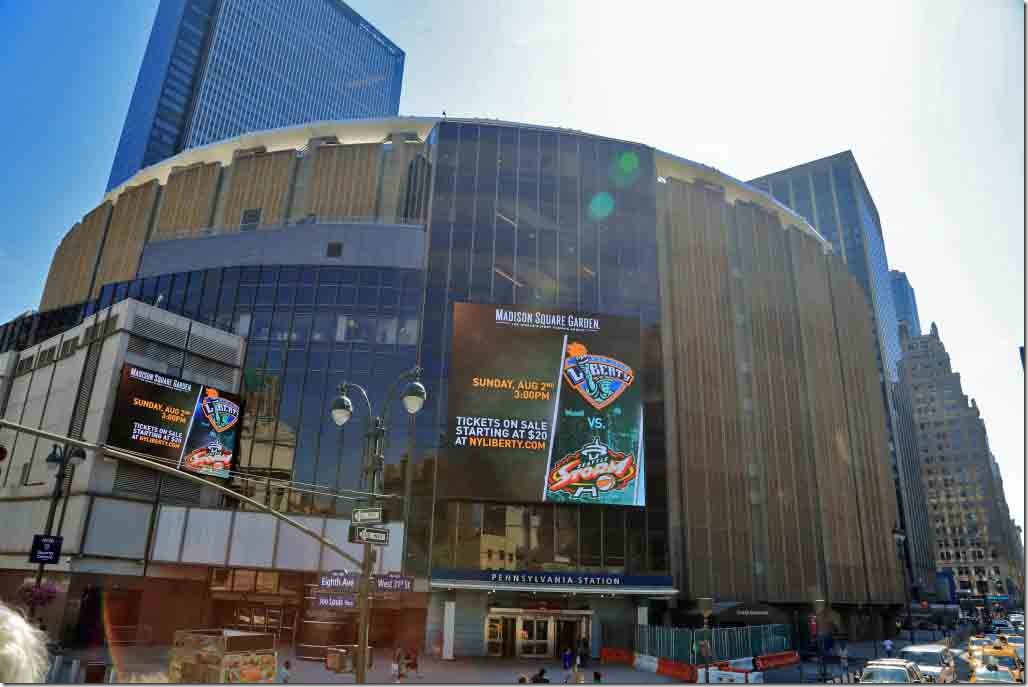 We continued along 8th Avenue, when Judi spotted Beer Authority, which advertised 90 taps and 100 bottles of beer – absolute heaven.

One of the narrow Avenues leading off W8th Street.

When the bus arrived back at stop #1 we had to depart and join the queue for the next bus. Having caught enough sun on the open upper deck we elected to sit downstairs, as we returned to stop #11 for a tour of Ground Zero. Check out the next post for a detailed report and photographs.