This will be an interesting day, as like many others aboard, this is our first visit to the west coast of South America. Today we selected a short tour visiting a Panama Hat weaving and the local Archaeological Museum, as they have documented local civilisations dating back to 9,000 BC.

Wind/Weather: Lt Airs alongside, S’ly at 20 knots at sea. Overcast.

Throughout the early morning Sea Princess maintained S’ly courses, crossing the Equator about 02:00 and arrived at the Manta Pilot Station about 05:00. We were secured alongside before 06:00.

At 19:00 the Captain thrust Sea Princess off the berth, before moving astern away from the berth. Once clear of the berth, course was altered to a S’ly heading at a speed of 14 knots towards our next port in Callao, Peru.

Manta is Ecuador’s largest seaport and has a population of about 200,000 people. Tuna fishing is the primary industry, with numerous large processing plants producing canned Tuna for most of the large world wide retailers. The next largest industry is tourism, with local history dating back to 9,000 BC.

Our tour this morning started shortly before 08:00, so we headed up to Horizon Court for breakfast about 07:00. My entire breakfast was stone cold, so the entire plate was returned and I tried the opposite side, which was much better. Judi had an omelette, which was made fresh, so no issue with cold food.

Today’s tour, is a short 4 hour visit to a Panama Hat weaving demonstration, followed by a tour of the Museum of Archaeology. Yet again, we were not disappointed with the conduct of our fellow passengers once our bus number was called. As usual, they requested we depart in the order that everyone arrived in the lounge, but no, as soon as bus # 5 was called the race, resembling a demolition derby, was on to reach the gangway and bus first. Our guide (Hector) spoke excellent English and was a wealth of information, completing the commentary at both locations.

This particular style of hat, while known as a Panama Hat, actually originates in Ecuador, or more specifically the small town of Montecristo, which is about 10 miles from Manta. The Panama Hat is a light weight, woven and breathable brimmed hat made from the locally grown Toquilla Palm. While this palm like plant is grown throughout the west coast of South and Central America, it is only the local area, where the soil conditions, provide a strong material for long lasting hats. 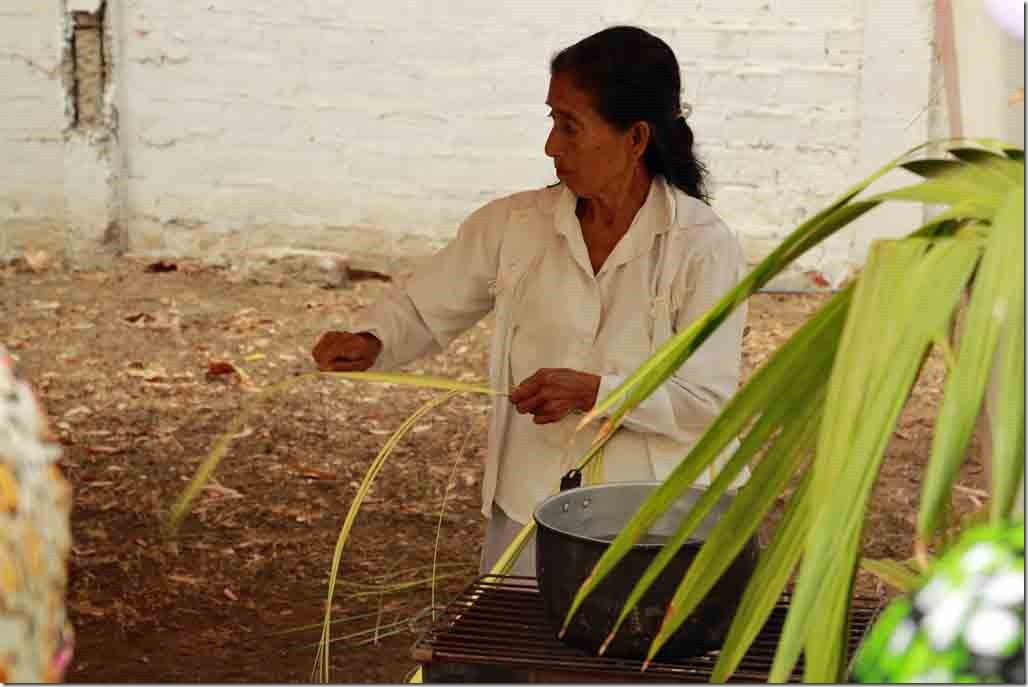 First stage with worker cutting the leaves into the straw required to weave the hat. Better quality hats are manufactured from finer strands, which are cut much thinner than the more course hats.

This is one of the strands cut fairly coarsely. A single hat will be manufactured from this strand. 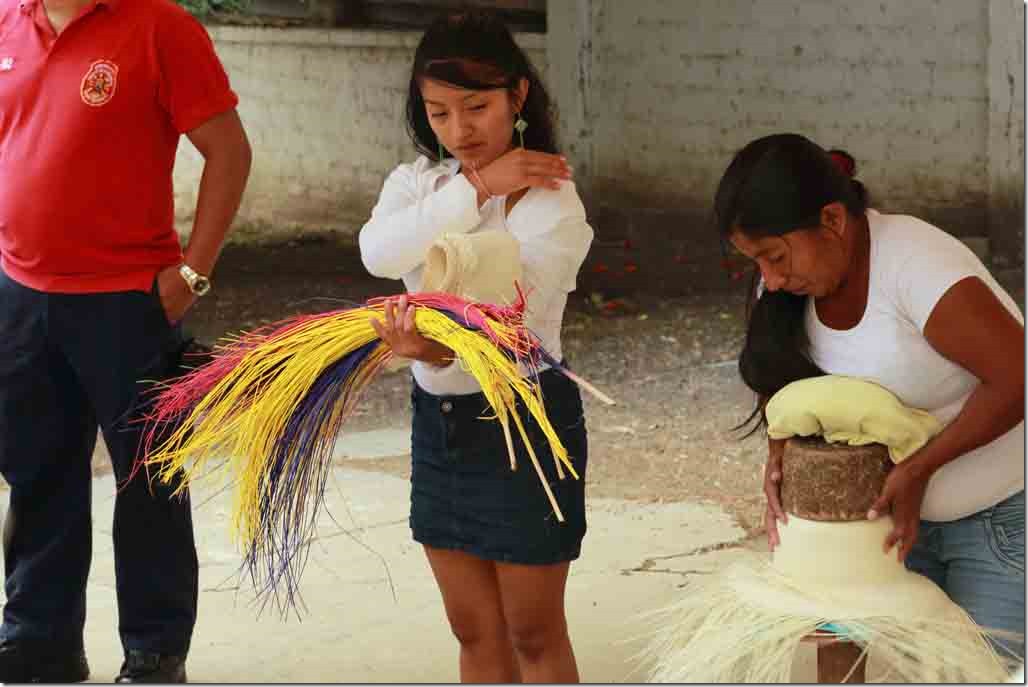 While most Panama Hats are white, an increasing number are coloured with dyes before weaving commences.

One of the ladies bent over weaving a hat. They can work only about 90 mins, or possibly 2 hours at one time, so each hat takes many days to manufacture. Our guide explained that hats from the finest straw can take up to 9 months to complete.

Judi with one of the hats being woven.

The name Panama Hat originates from a visit to Panama by U.S. President Teddy Roosevelt, who purchased one while touring the canal. On return to the United States it became known as a Panama Hat, a name which has stuck ever since.

On return to Manta, we spent an hour at the Archaeological Museum, which comprises four floors. With only an hour, our guide requested we head up to the 4th floor. The first display was a timeline of various civilisations from North, Central and South America. Local civilisations have existed since 9,000 BC, or a total of 11,000 years. Our guide Hector walked us around the floor, showing us exhibits, some which dated from the earliest local tribes. Some of the pottery and carved stone was simply amazing. He also explained that they were extensive traders, having established trading partners along the coasts of Central and South America.

We were requested to not take any photographs, so unlike a few others, my camera was turned off, until we were advised that photographs were permitted on the ground floor. 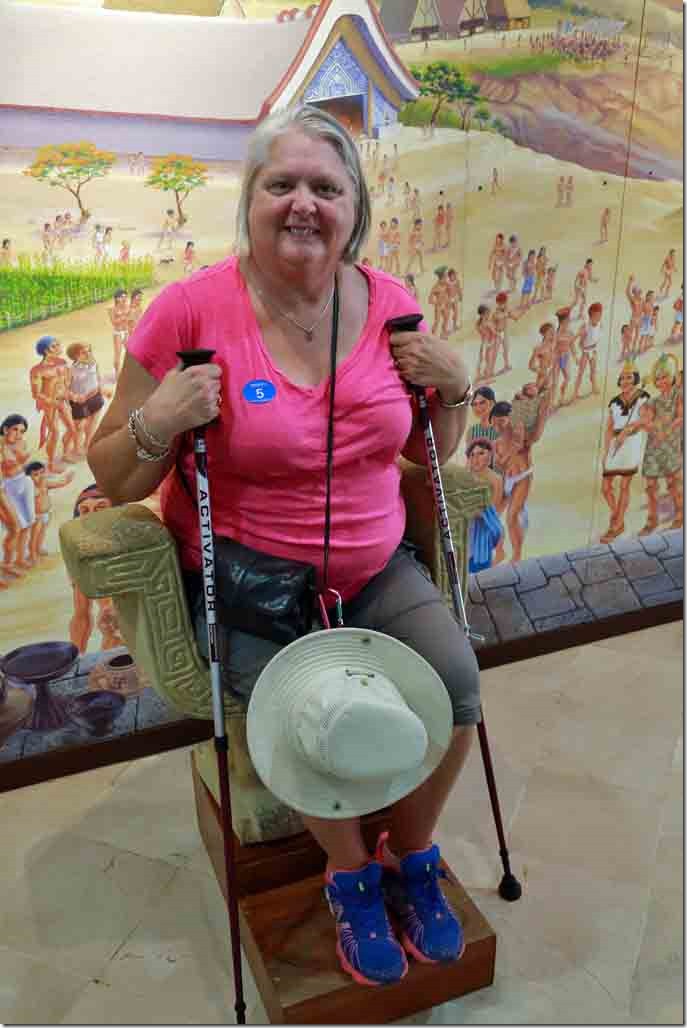 Judi sitting in a carved stone chair used by the tribe leaders, dating back thousands of years.

Tuna fishing is the major industry in Manta, with substantial quantities of fish being sold through the fish market on a daily basis. The market opens at 04:00 and by Noon, the entire daily catch is sold.

Manta fish market. As most fish are purchased whole, adjacent to the market are a number of stalls set up to clean, debone and filet the fish, for those that prefer not to complete these tasks at home.

After the fish market we passed a beach, which is used as a local shipyard with numerous small fishing vessels hauled up on the beach for overhaul.

Two of the many smaller vessels lined up on the beach getting work completed. Some new fishing boats are actually built on the beach.

As we drove to Montecristo I noted numerous roundabouts, rather than traffic lights, and many of them are adorned with statues, relevant to the fishing and weaving industries.

This huge statue to the weaving industry was located at a roundabout on the outskirts of Manta while we drove to Montecristo. The statue must be 25’ high. 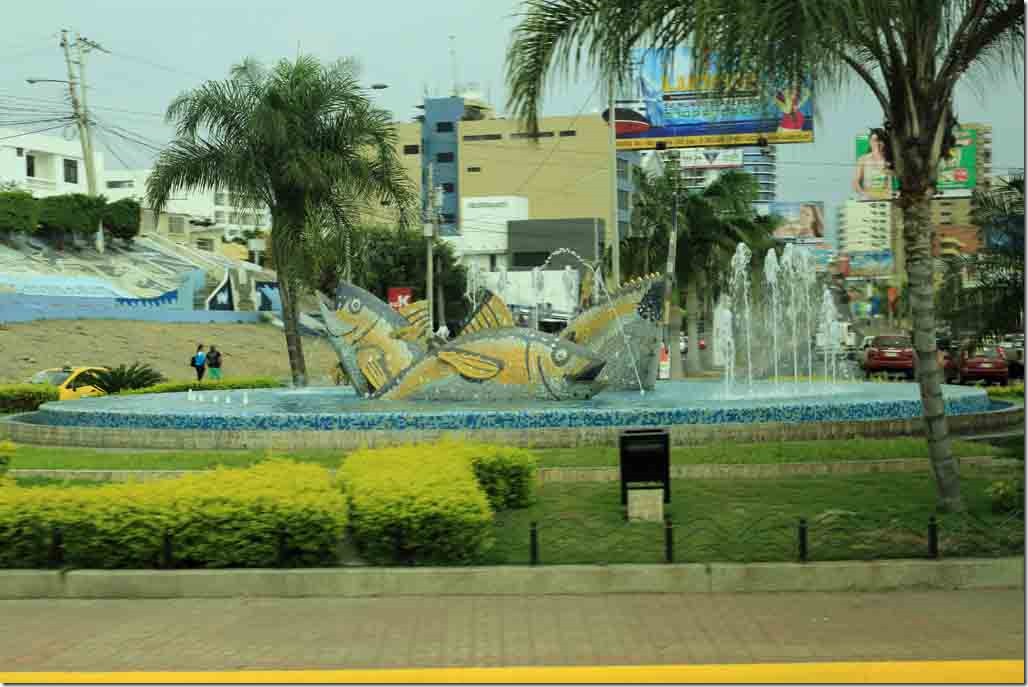 Roundabout in Manta with fish statues and a water park.

We thoroughly enjoyed the tour, returning to the ship about 11:45. While we remained in port until 19:00, we saw nothing in the immediate vicinity of the port that was of any interest, so we spent a quiet afternoon aboard ship. Being a port day, the restaurant wasn’t open for lunch, so we headed up to the Horizon Court. Yet again everything was cold, so I ended up with fresh fruit for lunch. In the afternoon, I worked on my book, learning the first features of Adobe Lightroom.

In the early evening, Christine phoned to ask if we are interested in dining in Horizon, rather than getting dressed for the dining room. While we prefer the dining room, we agreed to joined her and Bob at 19:30. Bruce and Viv didn’t have lunch until 15:00, so advised they might join us later. Wow, they had real vegetables for dinner – brussel sprouts and green beans, but when Christine returned and tried them, to nobody’s surprise they were cold. Basically everything except the prawns were cold. When a waiter removed the plate, I mentioned everything was cold, so he advised the Head Waiter, who came over to the table. He asked me to follow him to the buffet line and requested the cook to bring out fresh sprouts. The cook retrieved a fresh tray of sprouts from behind the counter, removed the plastic wrap and provide me a serving on my plate. They were even colder than the ones currently being served. The Head Waiter tried them and agreed.

Bruce and Viv arrived and Bob insisted we all have a refreshment, so I agreed to join him for a Guinness. We had a great time, spending almost 3 hours eating, chatting and sipping the refreshments. Judi and I agree that we really lucked out with the dinner table assignment, as you couldn’t ask for better company. The only problem, yet again we missed the entertainment, oh well, the entertainment we produce is much more enjoyable.