Our 2nd day in Callao, Peru, but on yesterday’s tour we saw nothing to entice us to return ashore. Bob & Christine took the mall shuttle yesterday afternoon and advised it was a complete waste of time, being an extremely high end mall with substantial numbers of security forces armed with machine guns. If we went to the mall, it would be to look for wi-fi, so we stayed aboard, since we still have some satellite time left. Welcome back Capt Kent, as his first announcements did not disappoint.

Due to depart at 16:00, we were delayed by the bunker barge, which arrive late and delivered the fuel at a snail’s pace. About 18:30, the Captain let the lines go and thrust Sea Princess off the berth, altering the ship’s head towards the breakwater. We steered various courses through the buoyed channel, with the pilot disembarking about 19:00. With the pilot disembarked, various courses were steered until we cleared Peru territorial waters, at which time a S’ly course was set towards our next port of call in San Martin, at a speed of about 14 knots.

My day started down on the Promenade Deck at 05:30, with a surprising number of the regular walkers also in attendance. About 06:00, the 2nd Bosun placed barriers across the outboard side, blocking off most of that side. The signs indicated closed for bunkering operations (re-fueling), however no bunker barge was alongside. This required us to change direction each time we came across one of the barriers, which really got a number of the walkers somewhat ticked off. When I left the deck shortly after 07:00, still no bunker barge and even when we returned from breakfast at 10:00 it still wasn’t alongside. Therefore, they closed off the deck for over 4 hours waiting for a bunker barge – not good customer service, as this deck is always filled with passengers walking multiple laps. Surely, the deck could have been closed off when the barge arrived. The other consideration is that the entire port side of the ship can stand on their balconies and look down on the barge once it arrived.

On return to the cabin, as usual I worked on more photographs, until Judi awoke. After a shower we headed down for breakfast, being one of the last ones in. We sat at a table with one other couple, who boarded in Southampton, enjoying some good conversation about our respective travels. Yet again we were the last to depart the restaurant. After breakfast we headed down to the Wheelhouse Bar, where I again worked on the photographs received from Bob a few days ago. For lunch, the restaurant is closed in port, so we headed up to Horizon Court, where I gave up with the hot food and just had a salad. Judi didn’t fancy anything on offer, so she had a hot dog and chips. We sat outside overlooking the pool and on completion, headed to the Scoops ice-cream bar for a cone instead of dessert.

We returned to the cabin, where I worked on photographs and read a bit more of the Lightroom 5 book, before we received the first very welcome announcement from Capt Kent. A number of newbies that joined in Southampton and New York were surprised as their cabin loudspeaker came alive to the booming voice of Capt Kent. He stated we should have departed at 16:00, but Port Control would not permit the bunker barge to come alongside until lunch time, due to other vessel movements in the port. He advised bunkering should complete about 16:30 and he anticipated being underway about 17:00. Most importantly, with only 130 miles to Sam Martin, it will not impact tomorrow’s arrival time. Great announcement and most welcome to yet again being kept fully informed by the Captain. It is also a pleasant change to hear Bridge announcements that you can actually understand. Sure enough, shortly after 16:30 the barge operators stopped the pumps and ran around sounding each of the 8 tanks. Then pumping restarted, not with the main pump, but a smaller stripping pump that had such a small capacity I couldn’t see any movement in the discharge hose. Shortly after pumping re-commenced, Capt Kent made another announcement explaining that they tried to short the ship by 6 tons of fuel, but the error was picked up by the engineers. He explained they only ordered 1,100 tons and with the time taken, it could have been transferred by bucket faster than pumping. Brilliant sense of humour, which we have missed during his vacation.

Late afternoon we received a knock at the door, with room service delivering a plate of chocolates and a form letter from the Executive Chef. Basically it apologised that our meal did not meet our expectations (which one?) and hopes that with the chocolates it will not cloud our opinion of the cruise and the services provided by the galley. We would be happy if the Chef implemented proper quality controls, consistently serving hot food that was properly cooked, rather than the easy option of sending a plate of chocolates. During the final hours of the bunkering we sat on the balcony with refreshments, enjoying the sights of an operational port, with lots of birds flying around and ships working cargo. The bulk carrier next to us was discharging white powder with their own cranes and buckets and the next ship was discharging new semi trucks, which were secured on top of the hatches. At the far end were 2 container ships with boxes literally flying off the ships. The show on the bunker barge was definitely entertaining, especially when preparing to depart. I guess machines, winches and cranes have not reached Peru, as everything was completed manually, with complete disregard to safety. The discharge hose, which was probably about 8”, and stretched the 20 feet from barge to ship, was manually pulled back up onto the barge once disconnected by the ship. From my days on tankers I recall these are extremely heavy. Then at the bow, another seaman was hauling up the containment boom, which also weighs a ton. With all this manual labour right at the edge of the barge, not one of them wore a lifejacket. Once the barge departed, Sea Princess finally set sail shortly after sunset, with us navigating through the harbour and buoyed channel in twilight. We stayed on the balcony enjoying the sights until time for dinner. 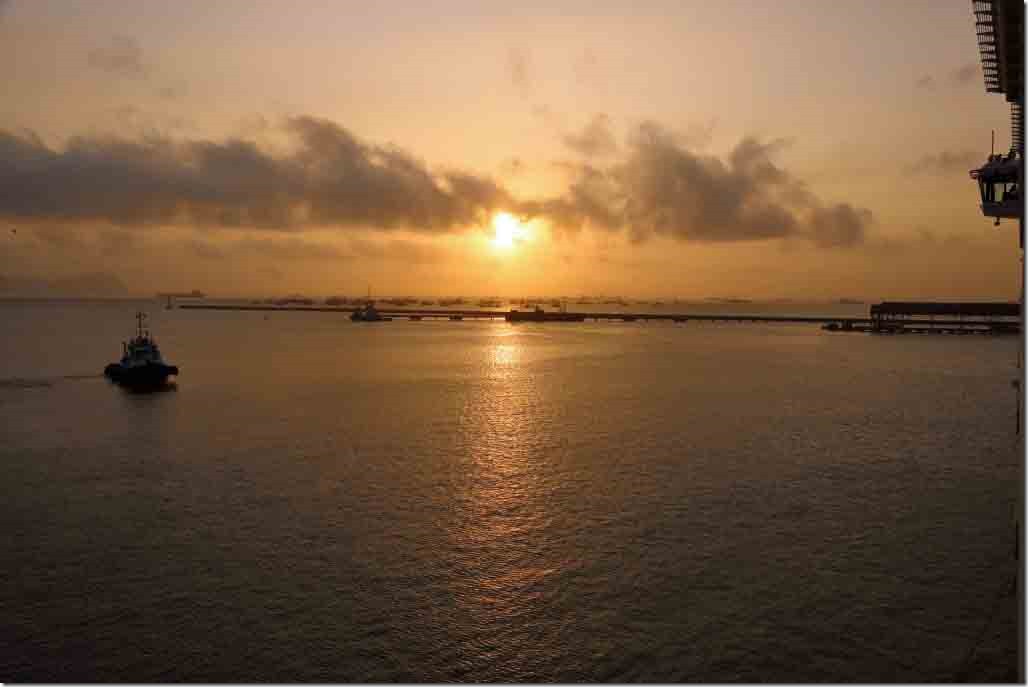 Approaching sunset while awaiting the bunker barge to finish.

With Bruce and Viv up at altitude visiting Machu Picchu, it was only the 6 of us for dinner. I had the sea bass, with asparagus and cuscus, with the entire plate of food being almost stone cold. Our Waiter was most apologetic and immediately headed to the galley to voice his displeasure with the chef and cooks. He returned with a reasonably hot plate of food and some nice steamed broccoli. For desserts, nothing appealed, so I had a Bob special – scoop of ice cream with banana and strawberries, rather than a fruit plate. Christine had a Panacotta, which was meant to be served on puff pastry. When it arrived the puff pastry was more like a graham cracker. About mid-way through dinner the rockin’ and rollin’ started in earnest, as we make our way south through the Pacific Ocean, so after dinner Judi, the ladies and Bob all headed straight to bed. Christine and I headed to the show, which was billed as a Princess Production Show, starring the Sea Princess singers and dancers. Yet again, calling this a production show is taking extensive liberties, as it involves a fixed stage with the 3 singers singing and the dancers gyrating around them. Again, a massive reduction in quality from the Princess shows of even 3 years ago.