As mentioned in a previous post, today was most definitely role reversal, as rather than the pax and crew pouring ashore, the local residents came out to visit the ship. Probably for the best, as I doubt Pitcairn Island could handle a sudden influx of 3,000 people. In this post I will start with the approach to the island in a healthy gale, show a few photographs of the resident’s boat coming alongside and unloading their ware, the onboard market place on Deck #12 and finally the scenic cruise around the island. I hope you enjoy.

Based on the Captain’s daily announcement yesterday evening, we expected some fresh winds and it certainly didn’t disappoint, with a healthy 35 knots in the early morning. 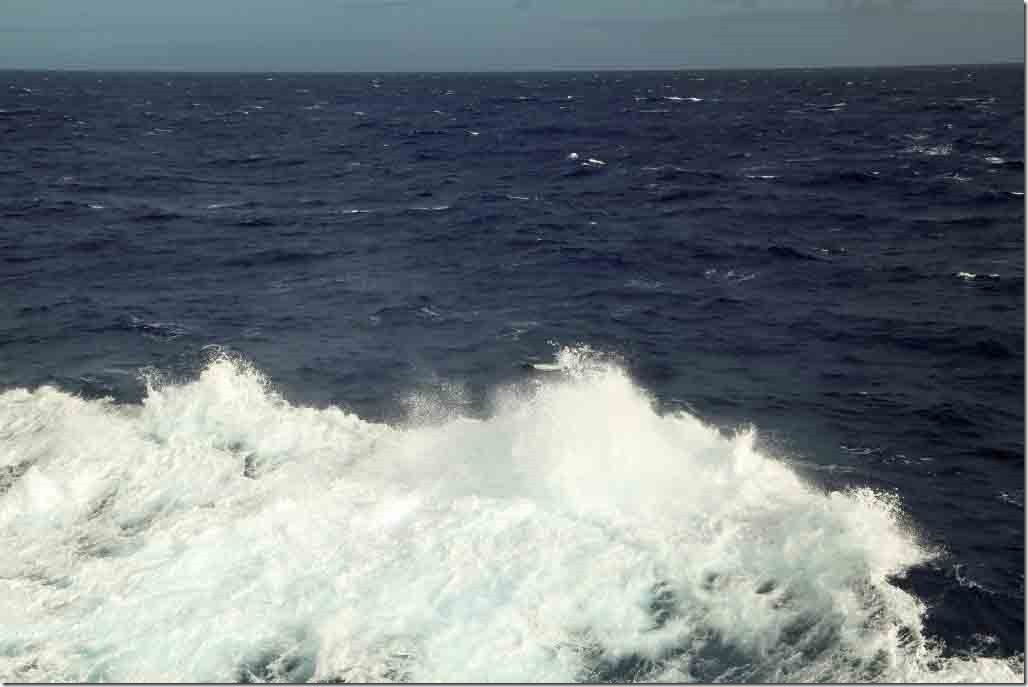 Approaching Pitcairn Island, about 10 miles out, with 35 kt winds and moderate seas. We approached the SE corner of the island where the Captain created a lee for the local’s longboat to come alongside Sea Princess.

In position a couple of miles off the SE corner of Pitcairn Island with the islander’s longboat inshore on the port bow. They came down the stbd side, around the stern and alongside the pilot ladder on the port side, almost below our cabin. 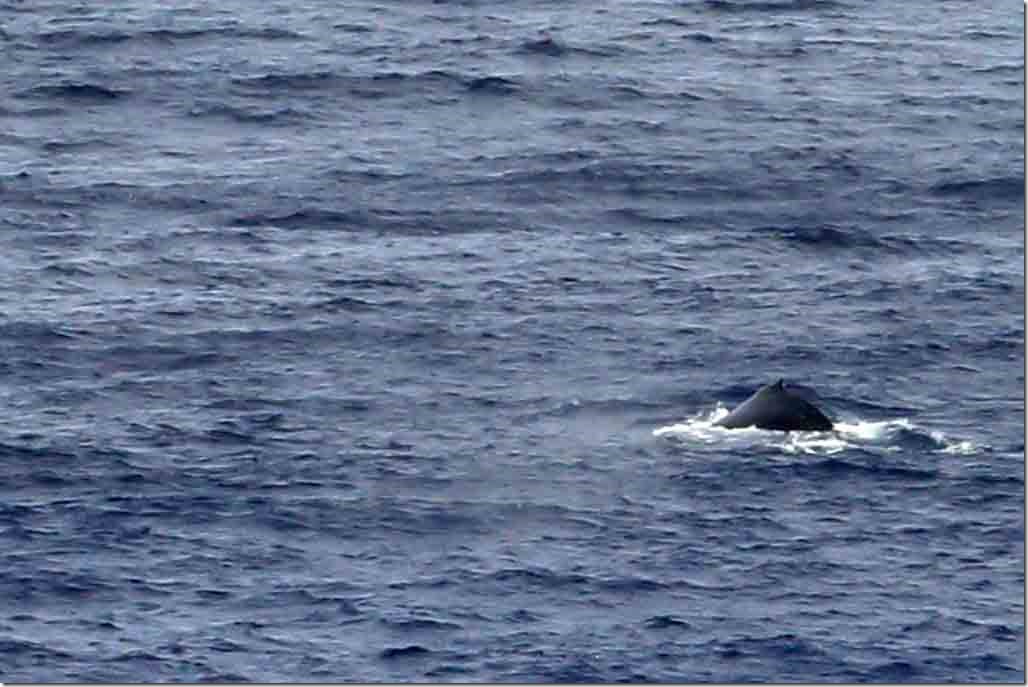 While waiting for the longboat to arrive, I spotted a spout about 1 to 2 miles on the port side. Setting the camera up for dynamic focus and high speed shooting, I caught a quick glimpse of our 2nd whale sighting, with the first being the approach to New York.

Pitcairn Islanders in their longboat, having just rounded the stern of Sea Princess are heading towards the port side pilot ladder. 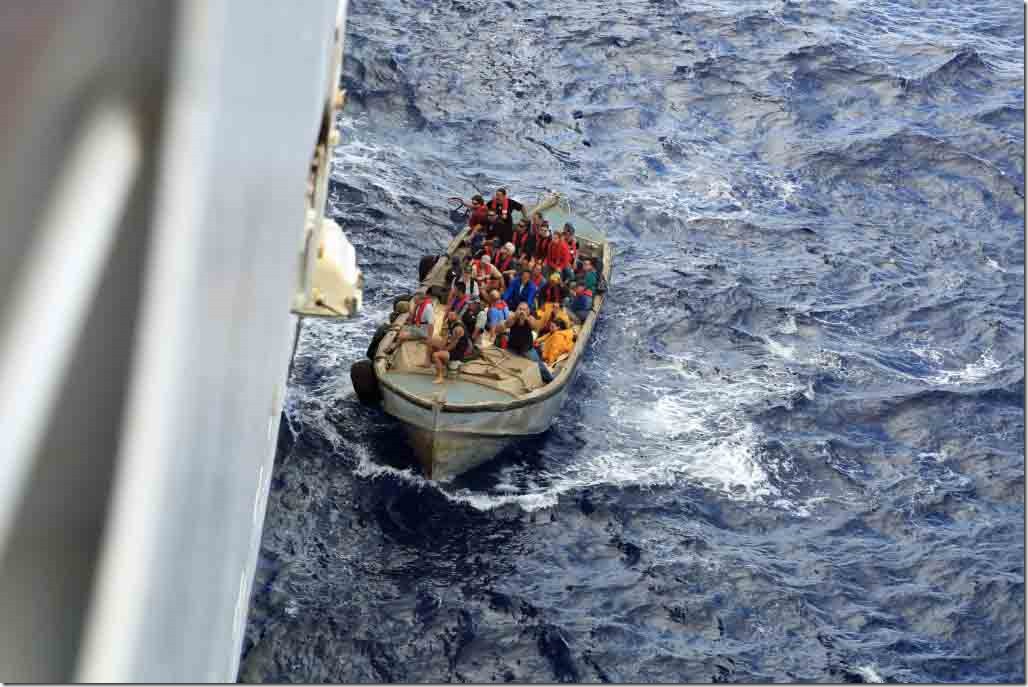 Of the 47 permanent islanders, about 35 of them came out on the boat, spending about 4 hours aboard Sea Princess, selling their wares at the market up on Deck # 12.

Securing a sternline while approaching the pilot ladder. 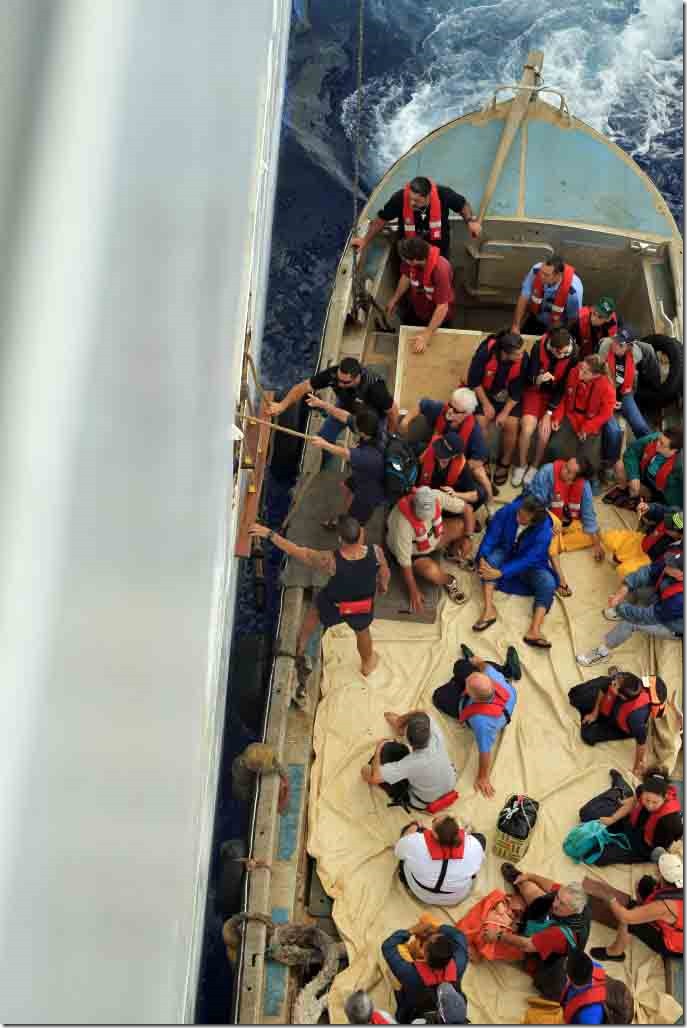 Finally alongside the pilot ladder in rather choppy seas, the coxswain demonstrated some fine boat handling skills. The residents initially wore sou’westers, but these were removed as the boat approached the Sea Princess. The above photograph shows the first islander preparing to take the leap onto the ladder and ascend up to the Deck #3 shell door. The others sit patiently awaiting their turn.

Even the kids made the journey up the pilot ladder to the safety of the ship. Only the more senior of the island residents stayed ashore, due to the inclement weather. 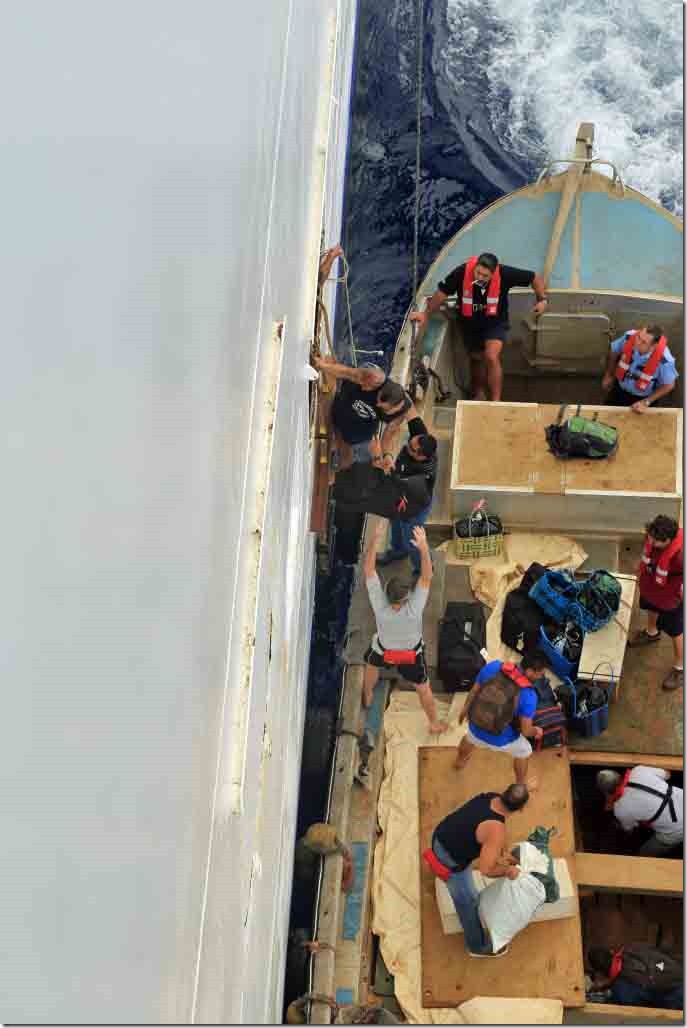 Once most of the residents were aboard, they pulled the tarpaulin back, revealing deck boards, when removed, revealed about a 4’ deep hold, filled with their wares. They literally formed a chain gang lifting the goods out of the hold and passing it up and onto the ship. One of the young chaps 1/2 way up the ladder, holding on with one hand and passing the goods up to the ship.

Loading some fairly good sized wooden boxes up to the ship. At this point we elected to head down to the Princess Theatre for the lecture on island life, rather than the official opening of the market place up on Deck # 12.

On completion of the lecture we headed up to Deck # 12 to check out the market, which consisted of many tables set up on both sides of the ship. We missed the official opening ceremony with Captain Kent and the Mayor, but did see it on the telly later. The speeches were short with the Mayor presenting the Captain with a jar of Pitcairn Island honey and a hand made replica of HMS Bounty. Captain Kent then presented the Mayor with a Sea Princess plaque.

The tables were arranged along the outboard side of the ship. This was taken over an hour after it opened, but it still resembled a mad melee. Judi did venture in to check out a couple of the tables, but no way I would even consider going anywhere near those tables. We met our table mates, who were present at the opening and they mentioned it was dreadful. People were pushing, shoving and grabbing stuff out of other peoples hands. Some even had the audacity to go behind the tables and start rummaging through the owner’s bags stowed below or behind the table. It got so bad they actually had to make a P/A announcement requesting you remained on the inboard side, or front of the tables. 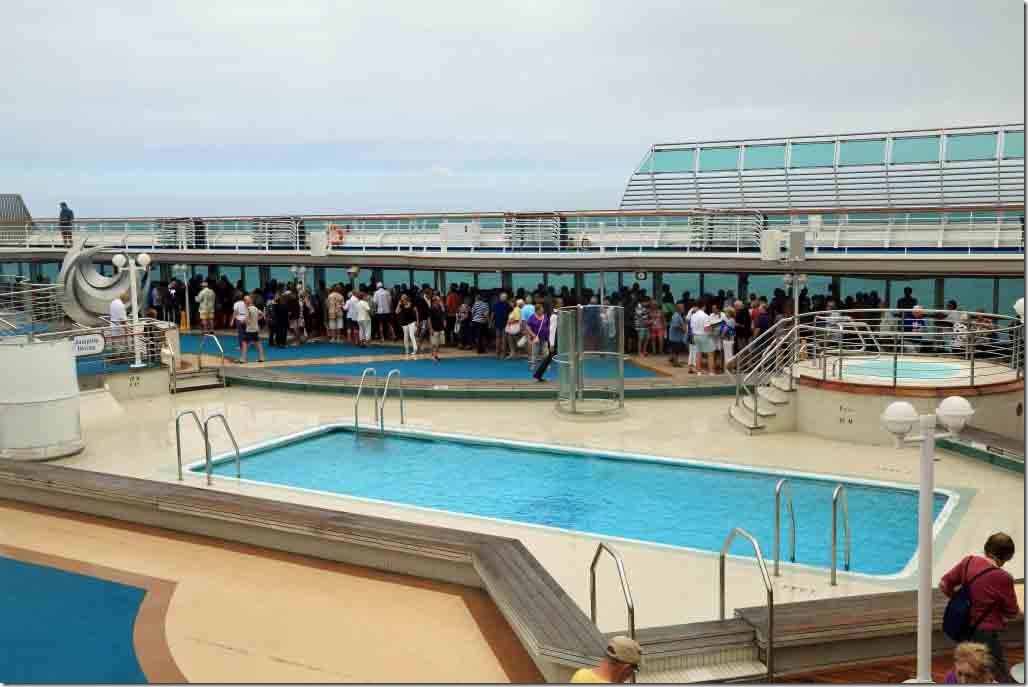 The islanders also provided a ceremonial stamp in your passport for US $10, which was popular, as the queue stretched down the pool deck and across the ship, even when we arrived. Prior to this visit the ship repeatedly advised the islanders would only accept cash, and only US dollars. They conveniently mentioned the Purser’s Desk will happily change Aussie dollars to US dollars, with a service fee of $6.00 and an exchange rate heavily in favour of the ship. Well, surprise, surprise, as the islanders would accept US, Aussie, Kiwi and Sterling. Basically they will accept any currency you have.

From the aft end, one deck above the pool looking forward. Market stalls were set up outboard on both sides, but still they found it necessary to exhibit a siege mentality. 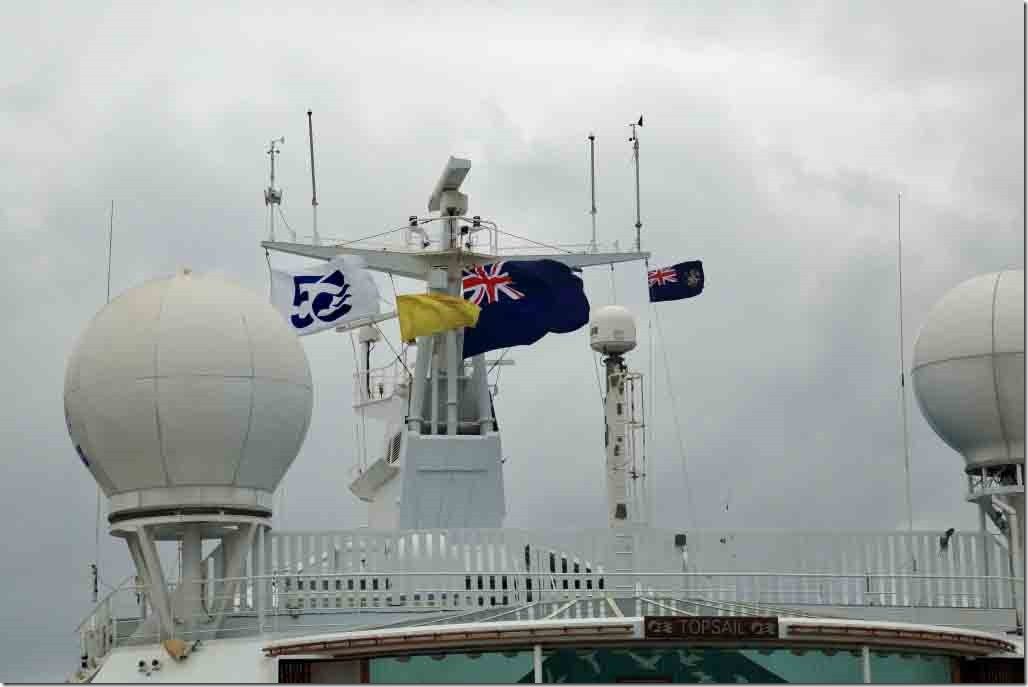 The mainmast flags, with the ship’s Blue Ensign prominently displayed on the Gaff, or aft end of the main mast. The outboard halyards have a sequence of priorities, with the most senior flag hoisted on the Stbd Outer, which in this case is the Pitcairn Island flag, or courtesy ensign. The courtesy ensign is the smaller of the blue flags with the Union Jack in the top corner. On the opposite side is the company’s house flag, which is currently the Princess Seawitch within the number 50. Flags then decrease in seniority on inner halyards, alternating Stbd then port. Basically a similar halyard on the Stbd side is more senior to one on the port side and an outer halyard is more senior to an inner halyard. The yellow flag is an international signal for requesting free practique or health clearance.

When the market place closed the islanders all congregated at the after end, singing a couple of farewell songs. They then headed down to the Deck #3 shell door for the descent down the pilot ladder to their boat. However, before loading the islanders, they loaded a considerable quantity of goods from the ship’s stores, including beer, canned goods, turkeys, steaks, potatoes, onions, flour, rice, etc. By the time they finished the area below the floor boards was packed full. The Cruise Director also made an announcement that they were collecting used paperback books at a table beside the Purser’s Desk on Deck #5. Many pax dropped off a large quantity of books, but before they could be packaged up for the islanders, other passengers dived in removing books. On completion, they announced a total of 150 books were donated, I can only imaging what the total should have been if other pax had not deemed their needs greater than those living on minimal incomes on a remote island. Unfortunately, I only shot video of the loading process, no photographs. Basically it was a reverse of the unloading, just the seas were more than a little rougher. The younger males were stationed at the bottom of the ladder and literally plucked others off the ladder and swung them around, dropping them gently onto the boat.

Islanders have departed and all pax vying for railing space to watch the scenic cruise around the island. We headed back to the cabin watching the longboat loading from the balcony. On the port side, we watched the boat loading and unloading, so it was only fair that the scenic cruise was stbd side towards Pitcairn Island.

I headed down to Deck #7, finding it mostly 2 or more deep along the entire railing. Finding an older, somewhat vertically challenged lady with nobody behind her, I stopped behind and had a great view over the top of her head. What a exceptionally nice lady, who exuded “class” through every pore in her body. She pushed over to the side and asked if I wanted to join her at the railing. I declined, suggesting she spread out and hold on, as I have a great view over the top of her. She laughed and agreed that yes, she is rather short. We chatted away and she mentioned her previous visit to Pitcairn Island was, but a mere, 77 years ago. About 1/2 way round the island, when we dug into a few seas and got a tad wet, she headed back inside. What a real sweetheart, I can only wish she gave lessons to some of the others. 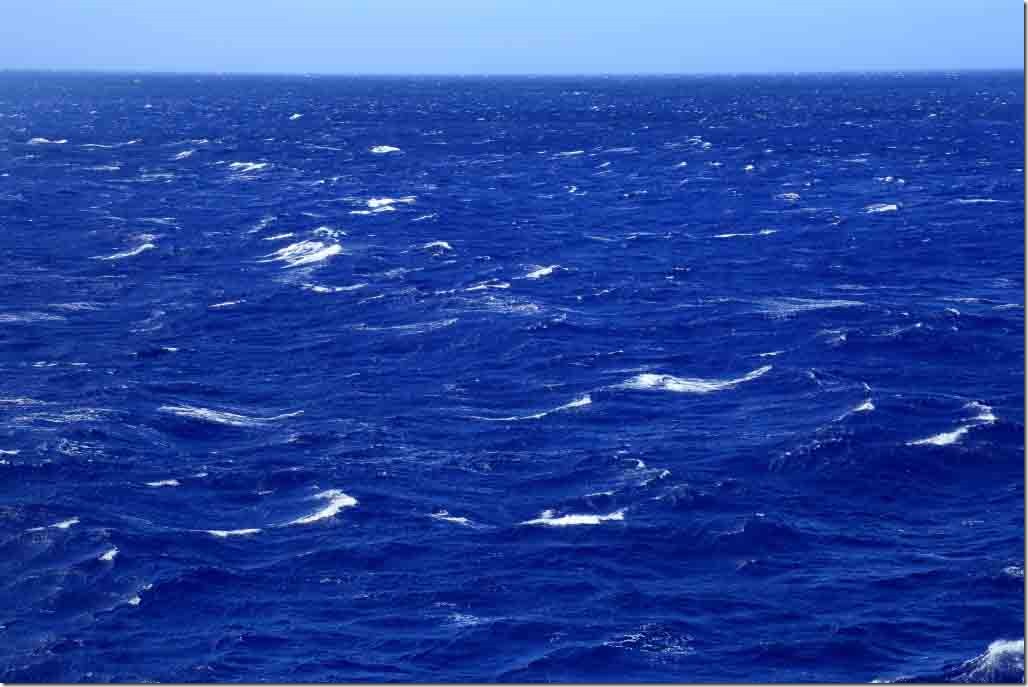 As we started the scenic cruise, the wind really peaked, with me estimating 50+ knots. Within a few minutes, the Captain made an announcement advising a wind speed of 55 knots, which was higher across the deck when factoring in the ship’s speed. 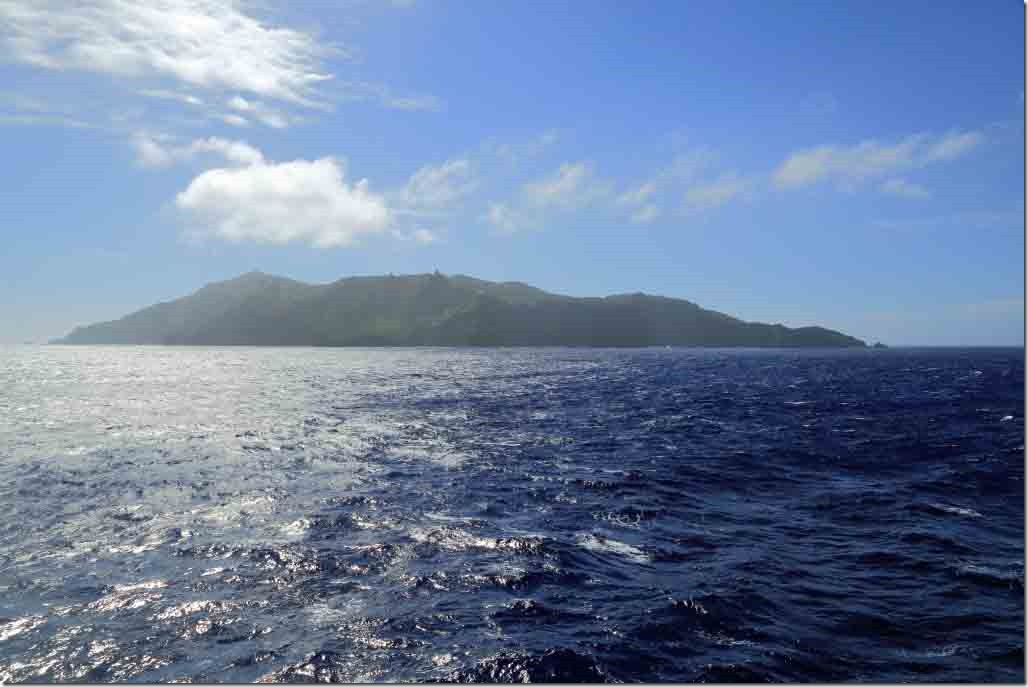 Pitcairn Island from the South at the beginning of the scenic cruise. 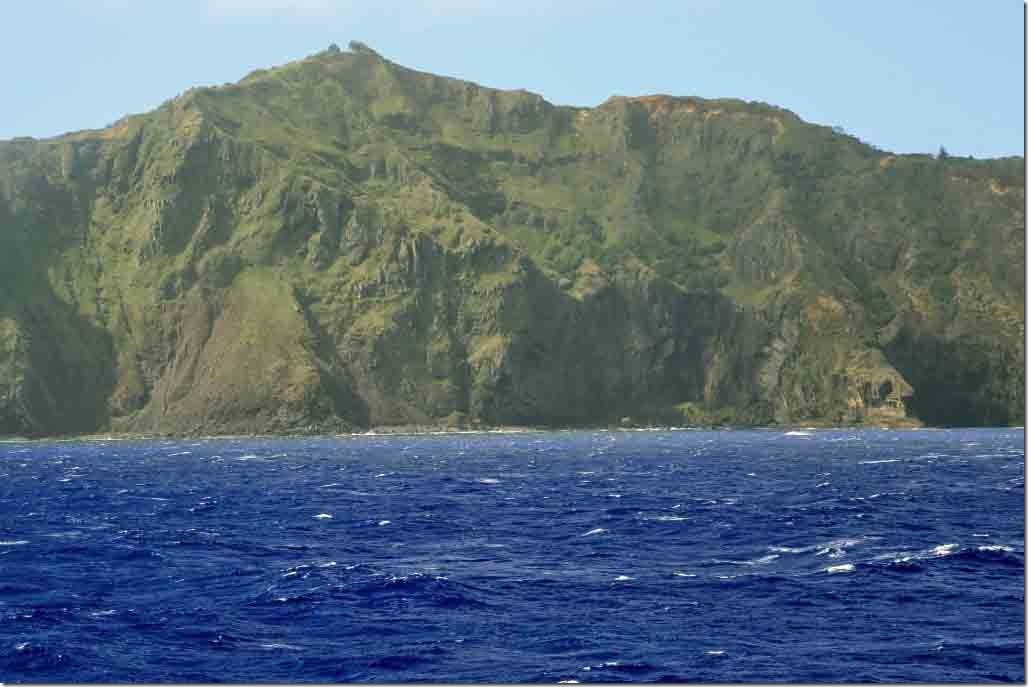 SW side of Pitcairn Island, which is uninhabitable and fairly inaccessible. 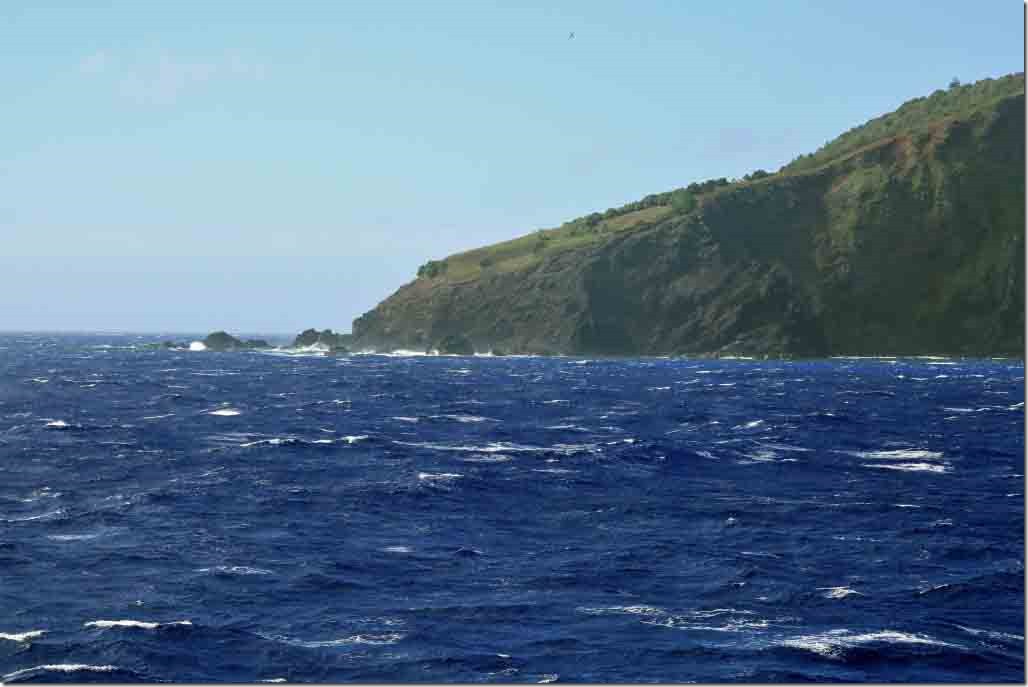 The NW corner of Pitcairn Island, which is called Christian Point.

Pitcairn Island from the NW corner.

Looking at the NW and SW shores of Pitcairn Island

Passing around the top of Pitcairn Island looking at the NW and NE shorelines.

The SE shoreline, which is the inhabited side and the location of the main harbour and HMS Bounty landing.

Rugged area of the SE shore to the North of the inhabited area.

SE side of the island, which includes the boat shed. 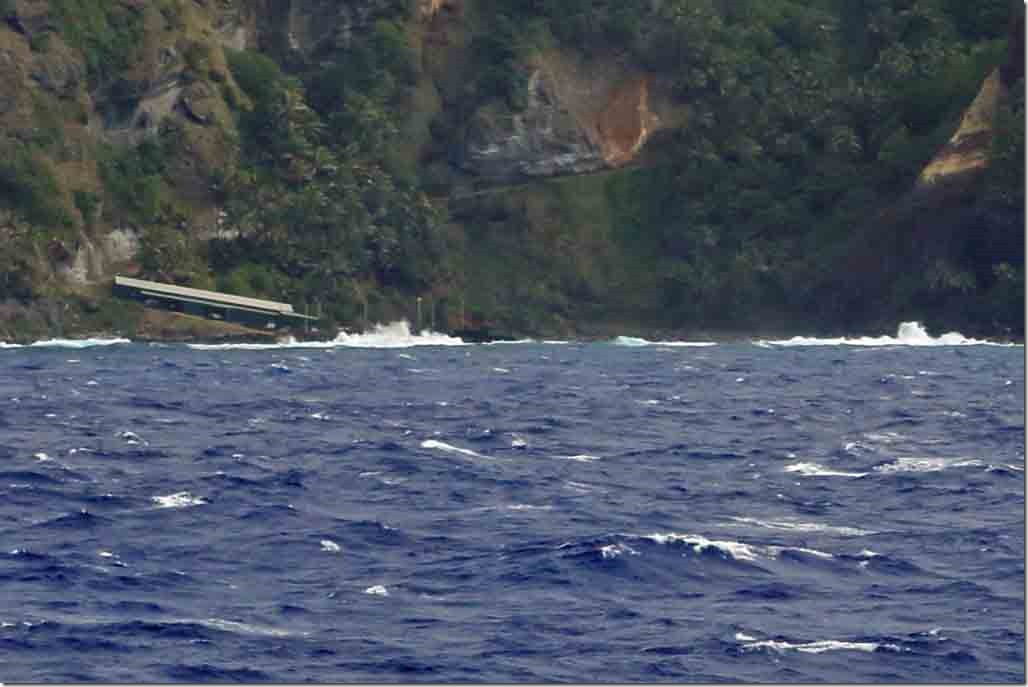 Close up of the harbour and boat shed on the SE shore. At this point we started a long and slow turn onto a WNW’ly course and set speed to 17 knots, as we commenced our passage to our next port of call Papeete. 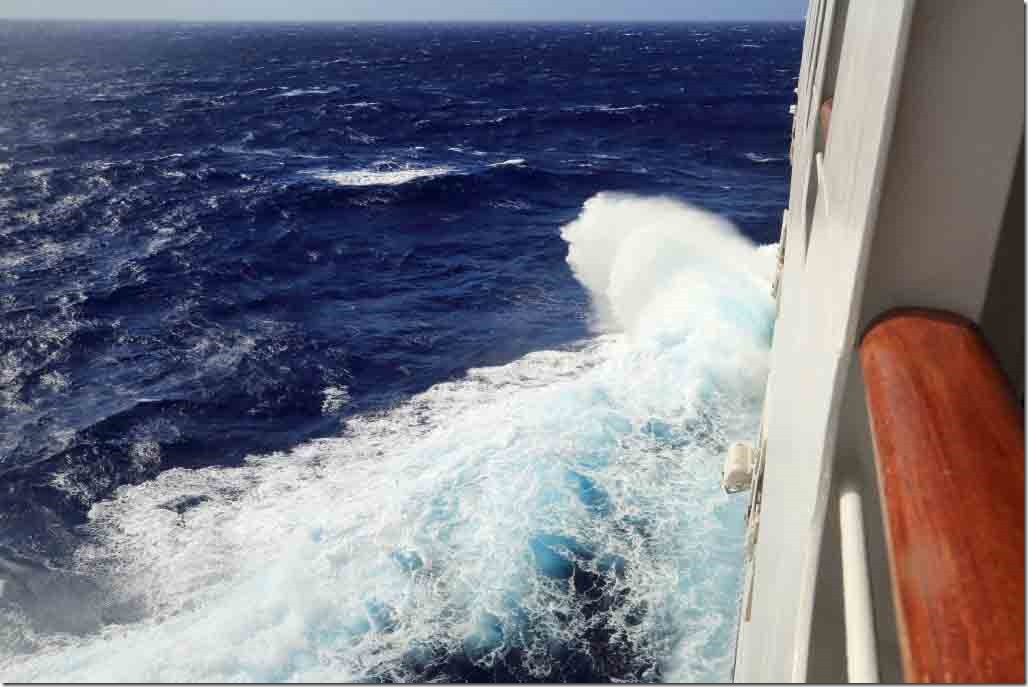 Check out the angle of the hull in relation to the horizon, which gives an indication to the amount of movement we are experiencing. Anything but smooth sailing.