After a relatively short jog of about 150 miles through the night we arrived at Bora Bora, another island of French Polynesia. Entering the single narrow channel in the outer barrier reef, we anchored in the bay off the town of Vaitape, commencing tendering operations shortly after 08:00. This morning we completed a two hour circle island tour and with very little on the shore, in the vicinity of the ship, we returned aboard, spending a pleasant quiet afternoon. However, the highlight of the day was spotting the fins of a couple of whales, during the departure. Our 3rd whale sighting.

Throughout the early morning Sea Princess maintained a generally NW’ly course to pass south of Raiatea Island, the largest of the numerous local islands. About 04:00 we altered to a NNW’ly course towards the entrance to Bora Bora, which we entered about 07:00, being brought up to the stbd anchor shortly before 08:00.

With the pontoons stowed and last tenders aboard and secured, the Captain commenced weighing the anchor shortly before 17:00. With anchor aweigh, he altered to port towards the narrow channel through the barrier reef. On clearing the barrier reef, Sea Princess set WNW’ly courses around a number of local atolls, at a speed of 18 knots, towards our next port of Pago Pago in American Samoa.

An atoll of the Leeward Group of islands and atolls, which are collectively part of the Society Islands of French Polynesia. The centre island is surrounded by a lagoon and barrier reef, which is dotted with numerous smaller islets. The main island has two peaks from an extinct volcano, with the maximum elevation being about 2,300’. Tourism is currently the major industry, with numerous high end and ultra expensive resorts sporting the iconic chalets built on pilings over the water. However, we noted that almost all of them are built on the small islets of the barrier reef. The island’s population is about 10,000 permanent residents.

With our tour report time of 08:00 we headed down to the restaurant when it opened at 07:00, again assigned to a table with just the two of us. When the pastry tray arrived this morning the waiter proudly exclaimed the croissants were still warm. A perfect start to the morning, hot and fresh croissant, washed down with a cuppa tea. After our usual breaky, it was back to the cabin, pick up the bag, camera, etc and off to the Princess Theatre for the tour. This morning we completed a drive around the island, which is about 19 miles around, making a few stops. Arriving back at the ship, I wandered around taking a few photographs while Judi went through the market. By 11:30 we jumped on a tender and back aboard for a relaxing afternoon. 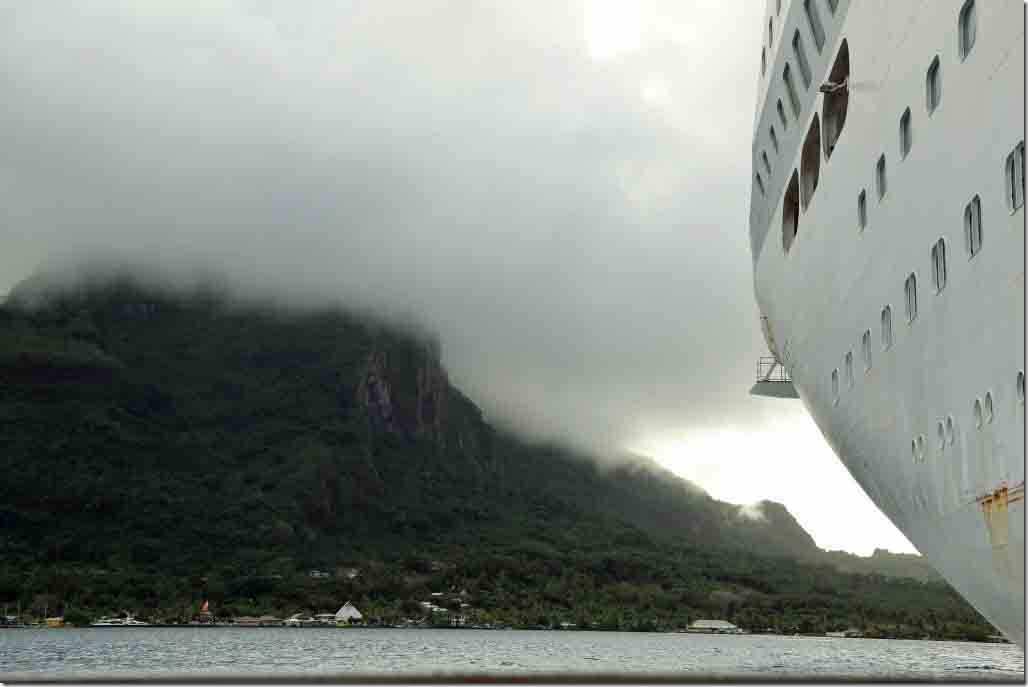 Heading ashore in the tender, looking out the front window with the ship’s bow and cloud shrouded mountain. 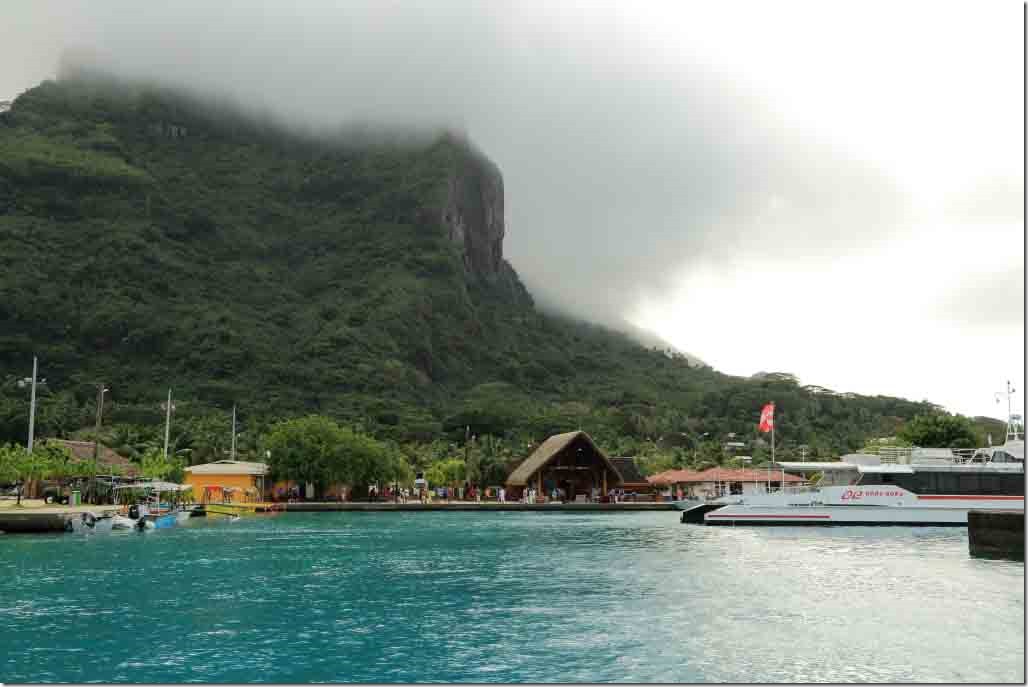 Approaching the harbour with tenders docking on the far wall.

We headed up to the Horizon Court for lunch, where most of the hot items were again lukewarm, so I enjoyed the cherry pie and some fresh fruit. After lunch we headed back to the cabin, sitting on the balcony enjoying the scenery and marine activities. We spotted an outrigger canoe racing up to the tenders and riding their wash. In addition, we watched a couple of kids in what was little more than a tiny plastic kayak, which was rather unstable. Needless to say, they got dumped in the water and couldn’t get back in. The older kid in the outrigger came to their aid, but he couldn’t help them get aboard, with all 3 of them in the water at times. Eventually one of the tenders headed over, taking the partially submerged kayak in tow and plucking the kids out of the water. All in a days work during tender operations.

The tender pontoon was almost below our balcony, so we had a great view of the operation. Having never paid much attention to the set-up or tear-down, I actually took the time to watch them close-up and stow the pontoon. Wow, what a really slick operation, with almost everything being hydraulic and folding down onto the pontoon, which is hinged at the bottom and folds into a watertight compartment. So much easier than the lowering of pontoons and ladders during my days on the older ships in the 70’s and 80’s. What would have taken us almost an hour they completed in minutes.

Tender operations almost below our balcony.

Once the pontoons were stowed and secured, and the tenders inboard we commenced weighing the anchor. About this time, at a fair distance, we spotted a couple of whales basking at or just below the surface just sticking their fins up in the air and slapping them on the surface. Unfortunately too far way for the 105 lens I had mounted on the camera for good photographs.

Looking astern as we departed the Bora Bora anchorage.

Barrier reef islets with resorts and marina on the port side, as we departed Bora Bora.

At dinner, it was only Bob, Christine, Judi and I at the table. Bob and Christine signed up for an amazing tour, which we discussed at great length. They went out to the barrier reef and with a helmet over their heads, descended down a ladder to the ocean floor, at a depth of about 12’. The helmet had a constant air supply, with sufficient pressure to keep the water out, allowing them to breathe freely. The view was spectacular in the crystal clear water, with an abundance of fish. For dinner this evening I had the prawns with a filet of barramundi. The barramundi was excellent, but as is too common, the prawns could easily have been warmer. For dessert, Bob and I ordered his usual, which is ice cream, banana and strawberries. Unfortunately the newly arrived bananas are still too green, so our waiter Santosh created a bowl of ice cream with a goodly portion of diced fresh fruit – strawberries, pineapple, melon, kiwi, etc. Yummy!

We received some new entertainers in Tahiti, as Trevor and Davidia departed, so we headed to Princess Theatre to watch Michael Falzon. It was billed as a rock theatrical journey with a contemporary musical theatre star. Sounds interesting. An excellent singer, he provided an eclectic mix of classical, rock and easy listening. An excellent show, so we will definitely return for his next show in a couple of nights.