The second of two sea days between the idyllic Bora Bora and Pago Pago, and wow, what a spectacular day it was. Being worldly travellers and courtesy of tomorrow being a port day, Judi took the liberty of arranging a surprise birthday celebration today, rather than tomorrow. However, based on Sydney time, when we headed for breakfast, it was already the 26th, so it really wasn’t a day early. We also scheduled a guys photo swap afternoon, which of course just happened to coincide with happy hour. Therefore, today was basically spent nibbling and imbibing with some exceptional company.

Throughout the day, Sea Princess maintained a W’ly course at 18 knots towards Pago Pago.

Commencing my exercise routine at the usual time, I have noted a benefit of having the forward section of the Promenade Deck blocked off until 07:00. When walking full laps, you tend to be in your own world, only occasionally seeing the speedy ladies that pass you, but walking the aft section of the deck we now pass the others on a regular basis. Yes, it was initially a bit of a shock, especially passing others in the confines of the stern, but we now have a routine organised and are stopping occasionally for a chat. First thing this morning, I walked a couple of laps with lady from Queensland, who was slowing down, as she started at 04:30. Then we were regaled with probably the best sunrise this cruise. Although  mostly overcast, towards the East, the clouds were tiered parallel to the horizon, with brilliant reds and orange colours peeking through the tiers of clouds, as the sun approached the horizon. Due to a band of cloud right at the horizon, we didn’t see the actual sunrise, but once it attained a few degrees of elevation, we experienced a huge ball of fire, slowly creeping up towards the overcast sky. Within a 1/2 hour the sun disappeared behind the cloud cover. Unfortunately, I didn’t have a camera with me and waking Judi up, by running back to the cabin, to grab the camera, simply isn’t an option. However, the 2 ladies both went for cameras and we stopped at the stern just marvelling at the amazing spectacle, having a pleasant chat.

I completed the 2 hours, returning to the cabin by 07:15 to find Judi awake and reading. Wow, that’s an early start for her, so I jumped straight in the shower, thinking we could head to breakfast at 07:30. when the dining room opens. I’m ready, but then Judi headed into the shower and on completion, took eons to get ready. On finally departing the cabin, she almost immediately returned to order some water from the steward. By this time, I figured we make it in time for lunch. Needless to say, it was shortly after 08:00 before we left for breaky, with the reason for her tardiness this morning, soon apparent.

Arriving at the dining room, Judi didn’t wait for the Head Waiter to give us a table number, as she just walked into the centre of the dining room. I just followed along, then noticed our entire table mates sitting at our dinner table. By this time Judi had a huge smile and I eventually clued in, she arranged a birthday party a day early. The table is all decorated with balloons and a number of Head Waiters are in attendance. Turns out Judi arranged it with Cynthia, the exceptional Customer Service Manager, who then worked all the arrangements with Bruce, so no calls came to our cabin. Needless to say Judi was rather proud of herself managing to keep it a secret. This morning we had Wayan, one of the best waiters in the dining room, who also substituted for Santosh last night. We started off with smoked salmon and bagel, which was excellent. Judi had requested a special treat of kippers, which they don’t actually stock, but they attempted a smoked fish, which just didn’t work out, arriving grossly over cooked and cold. Christine and I both tried it, but it just didn’t hit the spot. Judi even ordered a bottle of bubbly, so we all had a glass to start the day off properly. Finally they brought out a beautiful birthday cake, which we all agreed is the best cake we have had this cruise. All in all, a brilliant breakfast and we were the last to leave the restaurant, having enjoyed some excellent company and service. 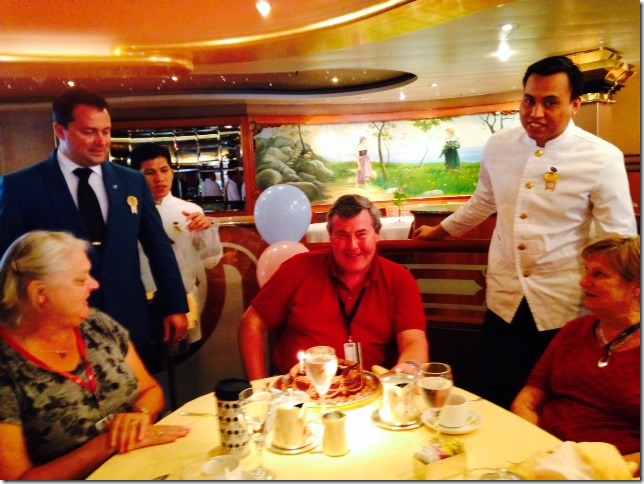 We barely had time after breakfast to return to the cabin, grab the lifejackets and head down for the Pax Sports or Emergency Drills. Post Costa Concordia, passengers must attend a drill prior to departure and in addition, every month (30 days), if aboard for an extended cruise. Later in the day, Bruce and I compared notes of our observations during the drill. We are amazed that the number of pax that don’t pay attention nor do they put on the lifejacket. With both of us having more than 40 years of seatime each, we could have an excuse to not participate, but no, we are probably the most attentive. Unfortunately, a number around us elected to continue reading a book and/or not try putting on the lifejacket.

After the drills, it was back to the cabin to get caught up with photographs and if time, some blog posts. The guys are meeting in Wheelhouse Bar at 13:30 for a chin wag session and photo swap, so I had to complete processing everything from Bora Bora and get them uploaded to the external drive. Finished about 13:20, I had no time to work on blog posts, which are a few days behind. When Bruce, Bob and I met we quickly got started the photo swap. I pass my external drive to Bruce, who uploads the RAW files, which this afternoon took almost 90 minutes. At the end of their Bora Bora underwater tour Bob was given a small stick with photographs, so I transferred them onto his USB drive. I then copied all his photographs onto a separate drive for Christine. On receiving my RAW files, Bruce converts them to JPG and has a spare external drive, which Bob will purchase. Therefore, we will load all my photographs and Bruce’s photographs onto the external drive for Bob and Christine. We ran out of time, so Bruce and I swapped external drives and I will upload his photographs and he is going to look at the hundreds of films on my drive. By 15:00, the ladies joined us for Happy Hour, so we sat in the Wheelhouse enjoying a few rounds of beverages, with Bob and I attempting to empty the storeroom of Guinness. A most enjoyable afternoon.

For dinner, none of us felt like getting changed, so we headed back to the cabins about 18:00, agreeing to meet in the Horizon Court at 18:30 for an early dinner. Probably a good idea, since most of us had no lunch, but did have a few beverages. Dinner tonight was excellent, with some great selections and everything that we all selected being nice and hot. On the cold side they had a huge vat of prawns in iced water. I started with a goodly portion of the chilled prawns, cocktail sauce and garlic bread. For main course, I tried the garlic prawns, which were being cooked at the buffet entrance, some potatoes, veg and salmon. Everything tonight was well cooked, tasty and even steaming hot. While we have all complained or grumbled about previous meals, tonight we all agreed it was kudos to the galley staff for a job very well done. Dinner tonight was excellent.

We finished dinner shortly after 20:30 and while I really wanted to watch the show tonight, it didn’t start until 21:45 and when they turned the lights out I, along with most of us would have been sound asleep. Therefore, we all elected to retire for an early night. On returning to the cabin we found our steward Ben had been hard at work with the bed filled with balloons and a towel art dog lying on the bed. 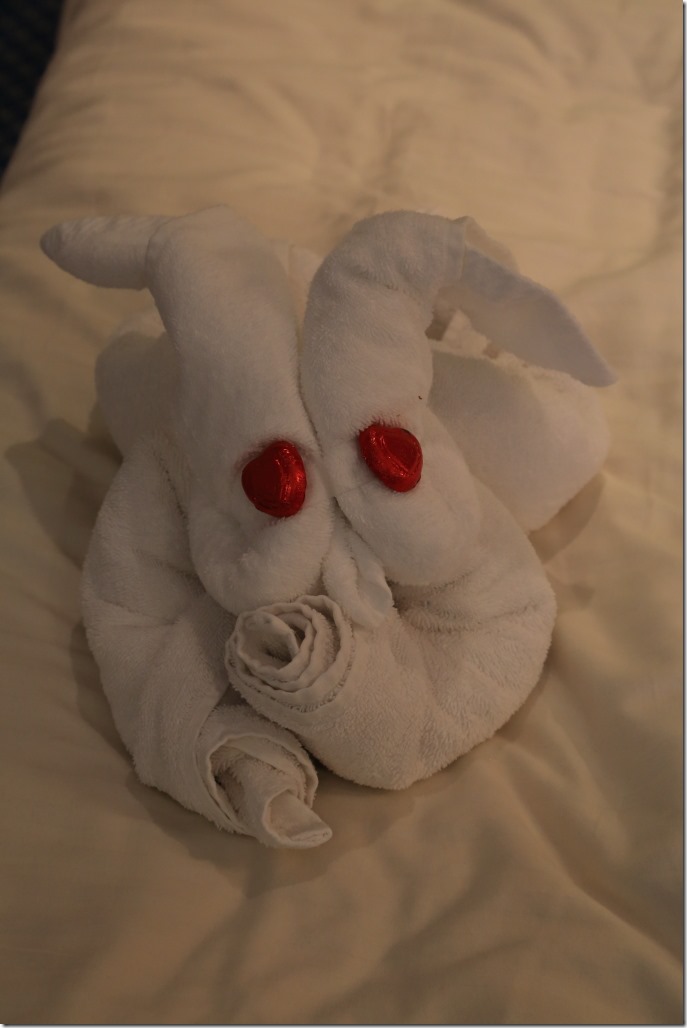