During last night’s update the Captain advised of inclement weather expected today. Sure enough after sunrise the wind picked up and the swell steepened, creating considerable pounding and slamming, resulting in the Captain altering course to the south to avoid the worst of the seas. Other than the weather, today was much quieter than yesterday, with few activities of interest.

Throughout the day, Sea Princess was scheduled to maintain a W’ly course at 17 knots across the Tasman Sea. However, once the wind and seas picked up the Captain altered to the SW for about 4 hours, before altering to the NW to regain the intended track.

This morning the passage was reasonably easy, with some light rolling and pitching, so I headed down to the Promenade Deck for my usual walk. I started walking with Faye, a regular from Queensland, who is always out before me. When she headed in, I continued until shortly after 07:00, completing my usual 6 miles. Returning to the cabin, I worked on yesterday’s blog until Judi was awake. A quick shower and off to breakfast. We sat with 2 other couples, neither of which we have enjoyed a meal with before, having some excellent conversation. Yet again, we were the very last to leave the dining room.

Grabbing the laptops we headed down to Razzmatazz where I worked on learning a few more features of Windows 10, while the ship really rocked, rolled and pounded her way across the Tasman Sea. Shortly before Noon, Judi headed back to the cabin, while I went to the theatre for David’s lecture on the science of refrigerators. Another excellent lecture where he covered the science of thermodynamics, evaporation, etc. After lunch we headed down to the Wheelhouse Bar for Happy Hour, unfortunately Bob was ailing, so an excellent excuse for a repeat performance tomorrow, our final day.

A busy evening, commenced at 18:15, with an excellent performance by newly arrived entertainers, “The Rat Pack’s Back”. Excellent singers, they performed many of the hits by the infamous American Rat Pack – Dean Martin, Sammy Davis Junior and Frank Sinatra. The 45 minutes just blew past as they ended the show with Sinatra’s “My Way”. Unfortunately, as soon as they announced their last song, a large number of pax headed for the exit and free drinks at the Captain’s Farewell Cocktail Party. One group of ladies, even had the audacity to scream and laugh going up the stairs. The very nice, elderly lady sitting next to me was thoroughly enjoying the music, so she gave them a good tongue lashing. I thanked her immensely.

On completion of the show, we headed down to the Atrium for the farewell cocktails, chatting with Cynthia the excellent Customer Services Manager and one of the nurses. The Captain completed the evening with another excellent speech and was standing outside the dining room when we headed in. Based on his talk yesterday, I thanked him for leaving a wee bit of rust on the MV Otaio, which he left on arrival UK in July 1975 and I joined in August 1975, just before departing for New Zealand.

Dinner this evening was Captain’s Farewell Menu, which has Beef Wellington and Lobster. On completion of the meal we arranged to have our Head Waiter and Waiters join us for a photo. 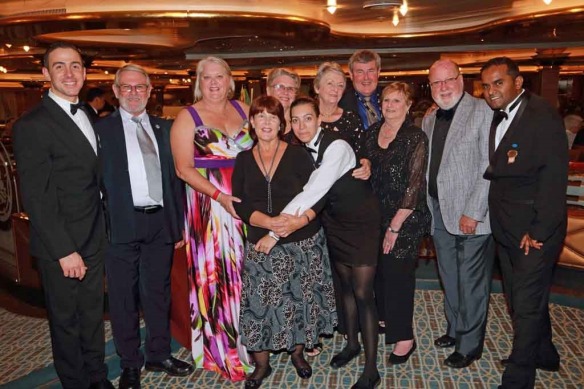 After dinner we headed straight back to the cabin to Skype with our son, who is currently serving as Captain on the 3rd largest yacht in the world, and at only 30 is most likely much younger than his peers. A very proud mum and dad.