Can you ever see too many whales? Well for Judi and I, the answer is definitely, a huge “No”. When working for Princess Cruises, I completed two seasons of Alaska Cruising and subsequently we have completed about 6 Alaska cruises, so we have seen many, many whales. However, on arriving on Maui, a whale watching trip was still one of the activities at the top of the agenda.

The middle of April is close to the end of the Hawaiian season, as many whales have already started the migration to the Alaskan feeding grounds. We selected Pacific Whale Foundation out of Maalaea Harbour, as they provide a complimentary cruise, if no whales are sighted during your cruise.

We are happy to report that we didn’t receive a complimentary cruise. Check out the following photos of our whale sightings.

Check-in is 45 minutes prior to departure, at their store, which is next to the Maui Ocean Centre. Shortly before departure, a crew member walks the group down to the boat, which is almost at the furthest dock. After the obligatory pre-boarding photograph we boarded with our group of about 12 passengers; on a double deck catamaran that holds about 150 passengers. Needles to say, prime viewing spots were not at a premium.

We headed to the upper deck, along with most of our fellow passengers. This doubled as the ship’s Bridge, as the Captain operated the ship and mingled with the passengers. We actually stood next to the conning station most of the cruise. It really was an exceptionally relaxed atmosphere.

We had barely cleared the harbour and had set course when the call went out, “Whale dead ahead”. However, it was a few miles ahead of us.

First sighting a significant splash about 3 to 4 miles ahead

Hitting the throttles to the stops we raced at full speed to the location, but alas, this whale must have huge lungs, as we never saw it resurface. However, while watching ahead, we got our 2nd sighting on the beam towards shore. Somebody spotted an exhalation and swinging the camera around, I captured our first sighting on the surface. 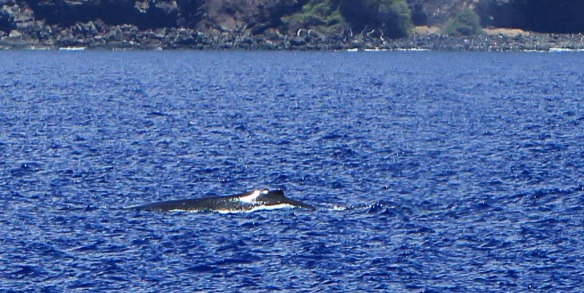 First Sighting of Whale on Surface

The Naturalist explained that the Humpback Whales normally stay submerged for about 15 minutes, but the longest recorded was 59 minutes. With this whale, we waited an agonising 20 + minutes for it’s 2nd appearance. Eventually it re-surfaced, putting on an impressive show.

One of a series of photographs of the 2nd sighting

Slideshow of 2nd sighting shot at 5 frames per second

Enjoy the slideshow, which comprises the 10 photographs of the 2nd sighting, from the exhalation to the tail slipping below the water. The series was shot with 400 mm lens at 5 frames per second. In addition, they were severely cropped,  due to the distance from the boat.

We waited in the vicinity for about another 20 minutes, but the whale hadn’t re-surfaced, so the Captain headed further out to find more whales. Unfortunately, this was a futile excursion, as no whales were spotted. Another company boat kept station at location of the previous whale we sighted, but their Captain reported it dived about 5 minutes prior to our return. We held station and waited, but no whale. Time was marching on and it was time to head for home.

Shortly after setting course for the harbour, I spotted an exhalation right astern at a distance of about 1 mile. 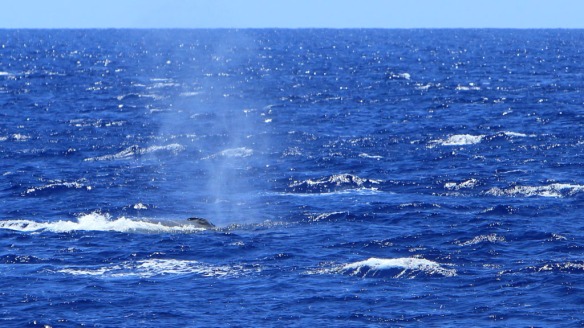 Our final sighting – we only saw the exhalation, but camera captured the whale

The Captain reduced speed and within a couple of minutes were treated to the highlight of the cruise.

This was taken from at least 1 mile distant with a 400 mm lens. Seeing it live was simply spectacular.

Whale landing after a full breach. The next photo show the huge splash.

Wow, what a spectacular sight. What an excellent cruise. If you are ever in Maui, we definitely recommend this attraction with Pacific Whale Foundation.