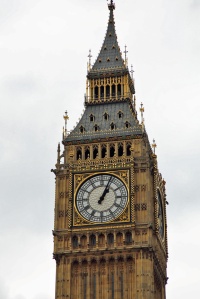 With 4 full days in London, prior to jumping on the train to Southampton, our objectives included – Florence Nightingale Museum (Judi), National Maritime Museum (Andy), Royal Observatory (Andy) and a Ho-Ho tour (Judi).  Yes, we have taken the big red buses in London before, but when the weather isn’t the best, they are usually a great way to see the sights. The Met. Office forecast rain on day # 1; therefore, we started with the Ho-Ho tour, followed by a couple of days in Greenwich, with the last day walking to the Florence Nightingale Museum, Westminster Bridge and along the south bank of the Thames, around Waterloo. We have additional visits to London for a couple of days prior to and after the cruise, so will visit Buckingham Palace, Tower of London, London Eye and hopefully the Palace of Westminster/Parliament on those days.

This is the one activity I forgot to research and pre-book tickets, prior to arriving in UK. London now has 3 service providers:

All three companies offer virtually identical services, with the first two being well established, and Golden Tours, the new kids on the block. Prices are fairly similar, with Golden Tours normally a few pounds cheaper than the others. Online prices are discounted from purchasing on the bus, with online tickets valid for up to 6 months.

Since we hadn’t pre-purchased tickets online, we caught the Tube to Trafalgar Square, electing to use the first company we found. This was the Original Tour, but sadly, we didn’t the receive the usual excellent experience we have grown to expect with other Ho-Ho operators. The negative experience started while purchasing tickets. With my Visa in hand, the vendor stated his credit card machine didn’t work, so without sufficient cash, we were heading to one of the other 2 vendors. However, his credit card machine made a miraculous recovery. Not sure what scam he was working, but was even less impressed with his attempt at directions to the bus. In very broken English, “See blue flags, find bus there”.

We wandered around Trafalgar Square, towards the blue flags, but well before them, found a bus sitting on Cockspur Street. They didn’t have any earphones, but advised the driver would provide a P/A commentary. The forecast rain hadn’t started, so we headed upstairs, and on settling into seats, noted Canadian flags across the street. We were parked in front of Canada House, which is huge, taking up an entire city block next to Trafalgar Square.

On departure, the driver provided the promised commentary, but we made a short trip around Leicester Square, before returning to the original stop at Canada House, where we waited a few minutes and changed drivers. Setting off again, the new driver didn’t provide any commentary. Shortly after departing the rain started, so Judi & I headed downstairs, as the entire upper deck was open. We remained on the bus until the Tower of London, where we switched to a River Thames cruise, which is included in the fare.

London is flush with literally thousands of statues and monuments throughout the city. Here are a few with special meaning for both of us. 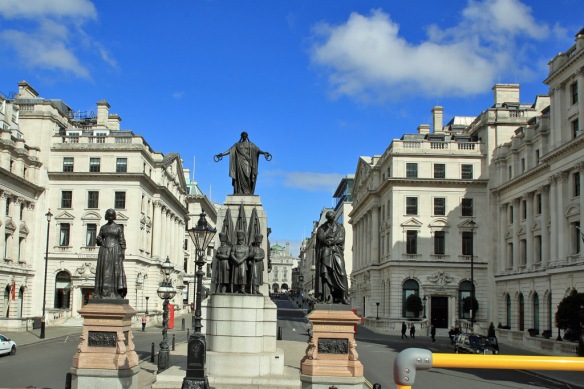 Located at Pall Mall and Waterloo Place, the Florence Nightingale Statue is to the left. 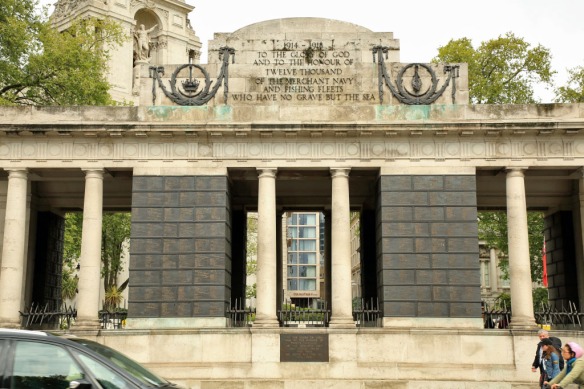 Located in Trinity Square Gardens on Tower Hill Road, it is adjacent to the Port of London Building.

Located on Victoria Embankment, this is relevant to both of us, as Judi’s dad served in the RCAF and my dad in the RAF.

The 1-day ticket includes a cruise between The Tower and Westminster Bridge, while 2-day tickets provides an additional cruise to Greenwich. Cruises are provided by City Cruises. 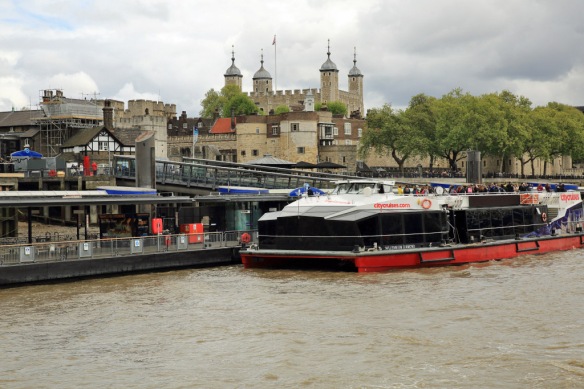 Departing the bus, we walked around the tower, toward the pier. While fairly basic, the boats are perfect for the short trip up river, having an enclosed lower deck for rainy days and an open upper deck. 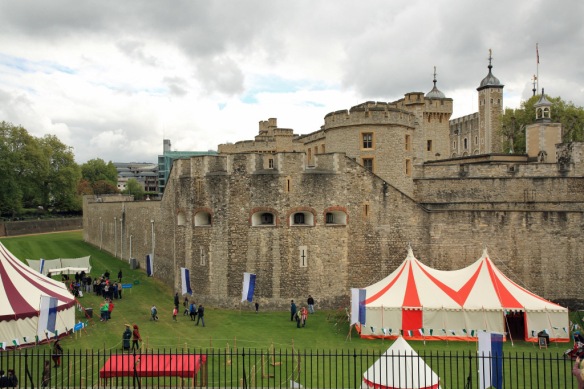 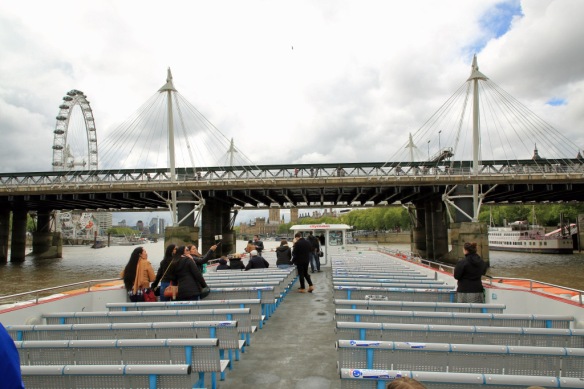 We had a brief respite from the rain, so I headed topside, for some better photographs, as down below the windows were tinted.

Tower Bridge, on departing the pier

We have 2 days in London prior to the cruise in September, so I am planning a Tower Bridge visit, including walking across the upper platform.

Built as a light cruiser for the Royal Navy, HMS Belfast is permanently moored close to Tower Bridge and is operated as a museum, by the Imperial War Museum. I am planning a visit, the same day I complete the Tower Bridge Tour.

The Shard, or Shard of Glass

At 95-floors and 1,016 feet high, the glass covered skyscraper is the tallest building in UK. Built as part of the London Bridge development, it opened in 2013, and has an open air observation deck on the 72nd floor.

Heading up towards Waterloo Bridge with the tree lined and shaded south bank promenade to the left, and the London Eye in the distance.

Built in 1934, the HQS Wellington is the last remaining sloop of the Grimsby Class that served during WW II. Purchased by The Honourable Company of Master Mariners in 1947, she was permanently moored on the Thames, and used as their headquarters for meetings and holding functions. It is now managed by a preservation trust, and can be visited, by appointment, for those with an interest in the sea.

After passing under Waterloo Bridge, to the right is the renowned ultra-luxurious Fairmont managed Savoy Hotel, which is located on The Strand.

This is a combination of the original Hungerforth (Charing Cross) railway bridge and the newer foot bridge on both sides. Construction of the foot bridges was completed in 2002 to honour the 50th anniversary of Queen Elizabeth’s accession to the throne. Construction was complicated by the London Tube’s Bakerloo Line running only a few feet below the Thames. They also had issues with potential unexploded WW II bombs in the mud at the bottom of the river. 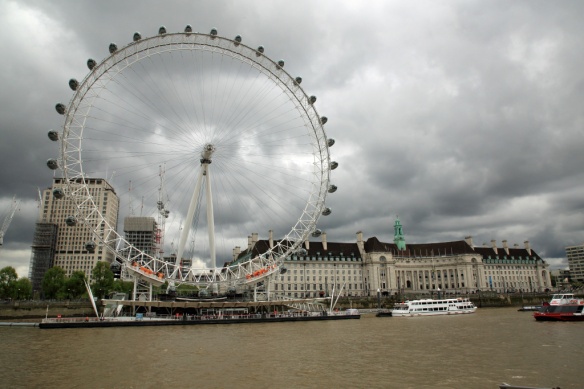 When you see the London Eye from a distance, it doesn’t appear to be turning, but when walking along the south bank, I noted that it actually rarely stops. It continues turning slowly, only stopping to embark, or disembark persons with mobility difficulties. Otherwise, it continues moving slowly, even while the capsules are loaded and unloaded.

Approaching the end of the cruise at Westminster Pier, we held off the dock awaiting the departure of another boat. This provided an excellent view of the Palace of Westminster.

Located in the lower floor of St Thomas Hospital, on the south bank of the Thames, by the Westminster Bridge, the Florence Nightingale Museum is a must see, for all nurses visiting London. A small museum, located on a single floor, it consists of 3 separate areas – her privileged childhood, service in the Crimea War and efforts in forming the nursing profession.

Located between the hospital and Thames, is the St Thomas Hospital Gardens, which has a fountain and numerous benches to sit, relax and enjoy the views across the river.

Palace of Westminster from the hospital gardens

After a short break in the gardens, we wandered across Westminster Bridge, returned to the south bank for a stroll along the Thames promenade. Before returning to the hotel we stopped at the Wellington Hotel (pub), across from Waterloo Station. A traditional English Pub, we enjoyed a tasty lunch, which I washed down with a couple pints of genuine hand-pulled craft ale.