When planning our current 5-month holiday in UK, I checked out the RCI website, the timeshare exchange organisation, to determine what timeshares were available in UK that we could exchange for our Worldmark credits. Our goal was finding options in Yorkshire, Lake District, East Anglia, Cornwall and Devon.

Signing into the RCI website, I found options for all the above except the Lake District, but another very interesting option was provided – a week on aboard a canal boat cruising the inland waterways. This was something Judi and I had discussed previously and had always planned to give it a try. Mentioning it to Judi, she immediately responded, after a nano-second of thought, with a resounding “Yes”.

Remembering the adage, “Happy wife, happy life”, the canal boat immediately jumped to priority status, so the Canal Boat Club at Union Wharf, Market Harborough, was the first exchange I reserved, and it did not disappoint.After making the reservation for a 4-berth boat, Judi thought about inviting our daughter-in-law’s mum (Erica) & granny (Nan); an invitation that was immediately accepted. It would be a wee bit cramped and with 1 bedroom and a dinning room table that converted to the 2nd bed, it would be akin to the old days of caravanning (RV’ing) as a child.

On arrival, we received an excellent reception from some great people – very friendly and helpful. Once the paperwork was complete, they helped move our gear onto the boat and showed where to park the cars. We then received a thorough walk through the boat, and instruction on the boat systems and canal locks. Following questions & answers, the trainer normally cruises up the canal with you for at least an hour, or longer, until you are comfortable handling the boat. On departure, I took it away from one berth and put it alongside another berth in the marina, at which point the trainer said, “you seem to have it figured out”. Basically he jumped off, and we pulled away from the marina and headed out for our 7-day adventure, not upon the usual high seas, but the local inland waterways. 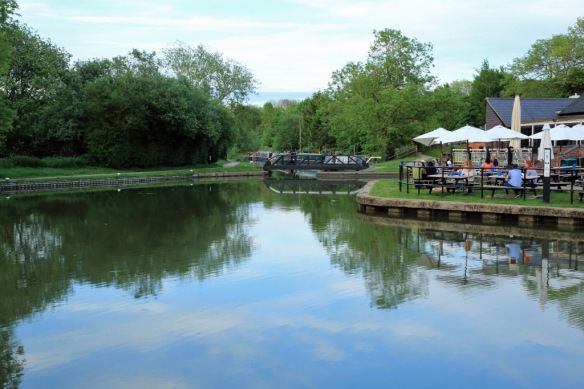 Foxton Locks Swing Bridge at far end of the water

Departing Union Wharf in Market Harborough, about 16:00, we completed the 5 miles to Foxton Locks in a shade over 2 hours, proceeding at a sedate speed of about 2 kts. Maximum speed on the canals is 4 kts and the trainer recommended maximum revs of 2,000. I found 2,000 RPM to be noisy, with some vibration, which tended to spill the drinks. Therefore, I found a comfortable engine speed about 1,200 RPM, which gave us about 2 kts. A very leisurely pace.

The initial cruising passes some magnificent homes, followed by passing through the countryside. Shortly before Foxton Locks, we met our first challenges, having to navigate through a couple of swing bridges. The first one was a car bridge, so you must close barriers on both sides, before unlocking the bridge and manually swinging it open. Once the boat clears the bridge you reverse the procedure. Yes, we did stop cars, so we had an audience for our first bridge – no pressure!! The 2nd bridge was only a pedestrian bridge, but again it was manual and required more force to open.

We planned to stop overnight at Foxton Locks, as this is the first navigational decision, as you can take 1 of 2 routes. Foxton Locks are a series of 10 locks in a row, raising the boat 75 feet. During my planning, I thought this could be rather onerous on the first day, so was leaning more towards heading for Leicester. However, during the training they explained that around Leicester, the canals may not be so aesthetically pleasing.

Our boat at Foxton Locks junction

On the above photo, to the left is the entrance to the locks and to the right it heads to Leicester, Loughborough, etc.

The above photo taken from our boat, shows the Foxton Locks Inn and patio on the left and the Bridge 61 Inn to the right. Between them is the very narrow entrance to the locks – only about 7 feet wide.

The above photo was taken while enroute to the pub for dinner. We had decided in advance that we would enjoy breakfast and lunches aboard the boat, but all dinners would be at a local canal side pub or restaurant.

This was a very interesting business. At the near end of the building, they had a small shop that sold touristy type stuff, but also some food items and ice cream. At the far end is the pub, which served basic meals and drinks. In among the trees on the far side, they have a pleasant garden patio, which includes a BBQ, where you could cook some meat. All they requested is that you purchase drinks.

Lower lock at Foxton Locks, with our boat in background

This was our first sighting of the locks; OMG it must have shrunk, it’s tiny compared to Panama. After an excellent dinner, we returned to the boat for sleep, before accepting the Foxton Locks challenge in the morning.

Awake at the crack of dawn, as usual, I escaped out the emergency exit and scampered along the side of the boat, sitting back aft for a couple of hours, enjoying the fresh air and the ever rising sun. Only thing missing was a steaming hot mug of tea, which arrived, when the Admirals (ladies) were awake.

Foxton Locks are managed by some exceptional volunteers. Shortly before they started at 08:00, I wandered around and started up the hill. Finding a volunteer he suggested following immediately behind the boat now entering the lower lock. Fortunately, on returning to the boat, the ladies were awake somewhat, so I advised them of the schedule. All hands on deck, cast off and let’s go conquer the Foxton Lock Challenge.

Over 200 years old, the 10 locks are set up as 2 flights of 5 locks each, with a passing pond in the middle. The entire 10 locks raise boats at least 75′. These locks are a Grade II listing building and receive hundreds of spectators on a daily basis. So yes, you have an audience the entire transit.

While the ladies got ready, I started the engine, cast off the lines, turned the boat around and headed for the quay by the Bridge 61 Inn. Erica and I jumped off to operated the locks, while Judi was in command, supervised by Admiral of the Fleet Nan. Judi did an amazing job, shoehorning the boat into those tiny locks.

Operating the locks really wasn’t that challenging, as the volunteers are great at explaining the system and are always available to lend a helping hand. By the time we got to the 2nd flight of locks, it was actually becoming great fun.

Our boat to the right at exit from Foxton Locks

Our timing was perfect, as we cleared the locks in about 45 minutes, securing at the top shortly before 09:00.

The Lock Keeper’s Cottage, built in 1814, is also a Grad II listed building and now houses a cafe, which opened at 09:00. Perfect timing, so rather than having breakfast on board, we headed to the cafe for bacon butties(sandwich).

We also received a visitor, willing to accept any scraps from our sandwiches. 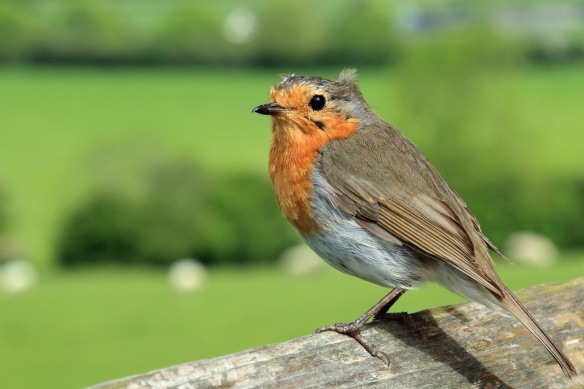 With full tummies and chests puffed out from conquering the locks, we returned to the boat and headed south along the Grand Union Canal.

Shortly after departing Foxton we encountered our first tunnel, the Husbands Bosworth Tunnel, which was completed in 1813 and is 1,166 yards long, with no ventilation shafts. The tunnel is narrow, just wide enough for 2 boats and has no tow path. It is brick lined and is reasonably dry, but you do get some drips, well actually quite a few drips. This is one of the shorter tunnels and we survived this one without meeting another boat. 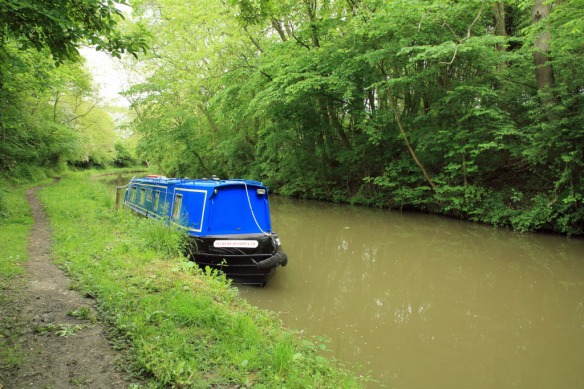 Shortly after navigating our first tunnel, we stopped for lunch and a celebratory glass of bubbly. You don’t have to find a marina, you can stop and secure almost anywhere on the canal. At this location, I used the single post to secure the lines, but the boat is also supplied with big spikes to pound into the ground to secure lines to.

Andy with hopped libation after lunch

At the end of day 2, we planned to secure around Welford Marina, which is at the end of a mile long offshoot off the main canal. Approaching Welford you navigate through another lock and then down a narrow channel with boats along one shore, except immediately before the marina, which has boats on both sides.

Rather narrow entrance to Welford Marina

The above photo is taken from where we secured for the evening and shows the narrow entrance.

Turning basin is down channel to the left

Welford is a single way in and out, so at some point you have to turn around. In the photo above, we headed down the channel to the left, which has a turning basin at the end. We then docked, facing outbound for a faster departure in the morning. 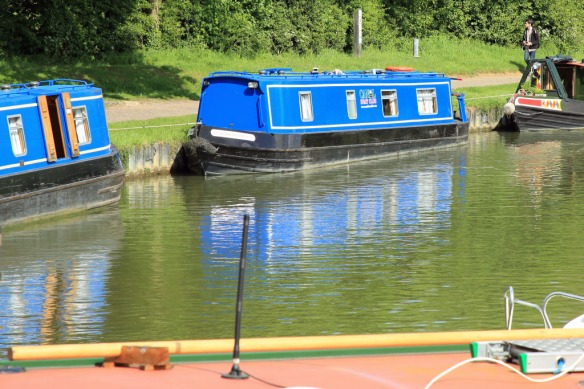 Our boat secured at Welford Marina

For dinner, we continued the tradition of frequenting canal side pubs or restaurants. It was a short couple of minute walk to the Wharf Inn, where we enjoyed a great meal.

This concludes the first few days of canal boating, check back for the conclusion in a separate post.

2 thoughts on “Canal Boating, The Ultimate In Peace, Quiet & Tranquility”