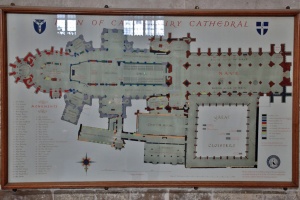 While I wouldn’t exactly call myself a history buff, I did enjoy the subject back in school, and to this day, I still enjoy visiting old castles, cathedrals, palaces, etc. Living on the West Coast of Canada, anything 100 years old is considered historic, but in Canterbury, they probably consider that current affairs, since the cathedral dates from 1070 and they have records going back to the 6th century, a mere 1,500 years ago.

We allocated 1 day for visiting Canterbury, and although I’m definitely not religious, the cathedral was on top of our places to visit.

At breakfast, while chatting with our B&B hosts, Tony & Jackie, they suggested using the park & ride, rather than driving into town. Since we paid UKP 1.50 per hour for parking the previous evening, we definitely followed their suggestion.

A brilliant system and I highly recommend it for any visitors to Canterbury. They have 3 routes, with Judi & I using the Wincheap route. Less than 2 miles from our B&B, the park & ride is located in the Morrisons mall complex, right off the A28.

With space for hundreds of vehicles, and buses departing about every 8 minutes, it is excellent service. For only UKP 3.00, you get full day parking and return bus journey for up to 6 people. Now that appeals to my heritage.

In Canterbury, you are dropped off at the bus loop on St Georges Lane, right at the edge of the city centre. Exceptional value and great service.

The current clock tower is all that remains of the medieval church of St George the Martyr. While the current tower dates from the 15th Century, it is believed a Saxon church may have graced this site as early as the 7th Century. However, the earliest substantiated evidence has a church developed in the 11th Century, with numerous expansions in the 12th, 14th and 15th Centuries, and again in the late 1800’s.

Sadly, on June 1st 1942 most of the church and surrounding structures were destroyed by German bombs, with only the current tower remaining. The church’s claim to fame is being where playwright Christopher Marlowe was baptised in 1564. 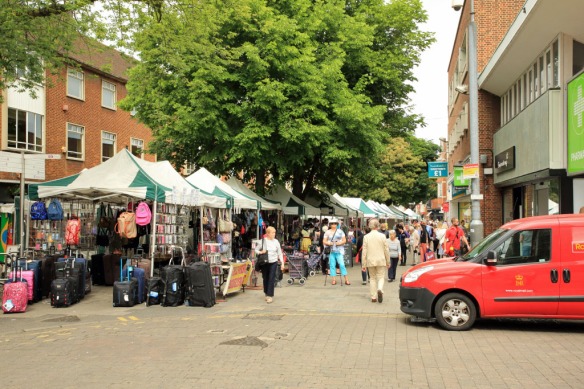 The Canterbury market is held Wednesdays & Fridays from 08:00 to 17:00. It comprises 2 rows of tents down the pedestrian precinct between Canterbury Lane and Longmarket. They have the usual selections of fruits, vegetables, meats and baked goods, but they also have stalls selling touristy stuff, linens, books, watches, baby clothes, etc. With a 2 yr old grandson we had to visit the baby clothes stall. 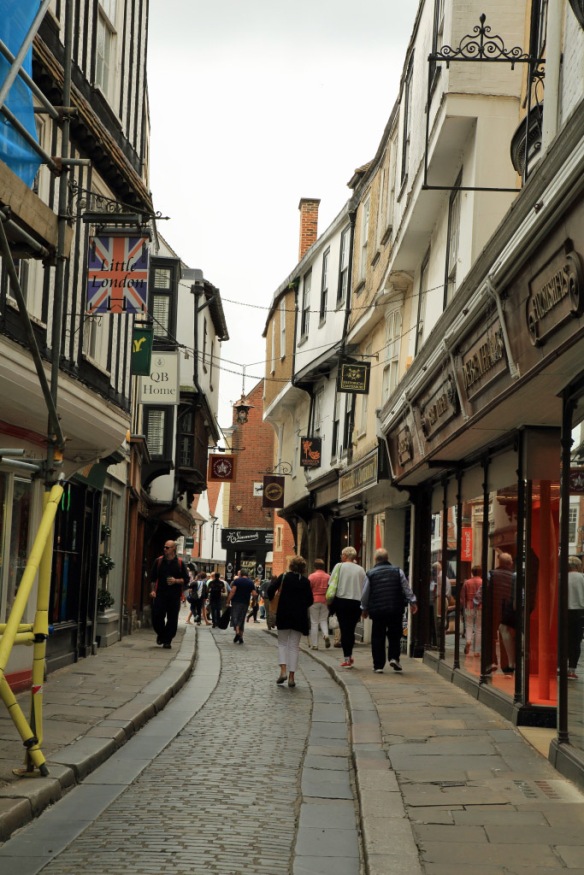 A typical narrow street in downtown

Above is one of many narrow streets, running from St George’s Street to the cathedral. 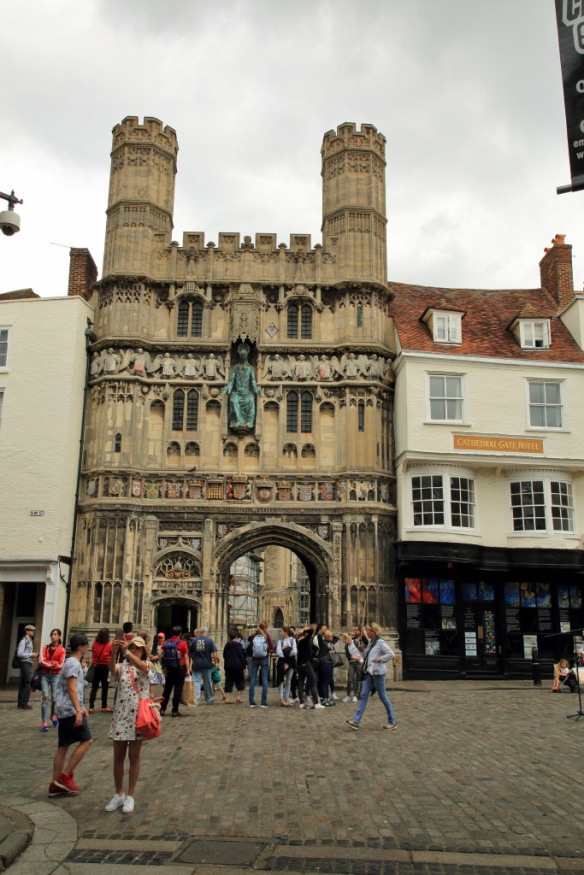 The above photo shows the entrance to The Precincts, which are the cathedral grounds and provide access to the cathedral.

Access – The cathedral is open daily, to visitors, except during services and special events. Check the website for planned closures. Entry fees:

UK tax payers can gift aid the admission price and receive a complimentary annual pass. During the summer it is open 09:00 to 17:30.

St. Martin’s Church is the oldest English church in continuous use and is considered the oldest church in the English speaking world. Already in use in 597 AD, when the Pope sent Augustine, a Benedictine monk, to England as a missionary, to re-establish Christianity. He initially established his mission HQ in the church, before commissioning St Augustine’s Abbey, which is currently in ruins. Augustine was the first Archbishop of Canterbury.

Augustine was well received by AEthelberht, the King of Kent, who he baptised a few years later. The development of the Abbey commenced about 598 AD, with additions in the 8th and 10th centuries. In 1538, King Henry VIII, during his suppression of the monasteries, assumed control of the Abbey from the resident monks. The Abbey was ransacked and laid to ruin. 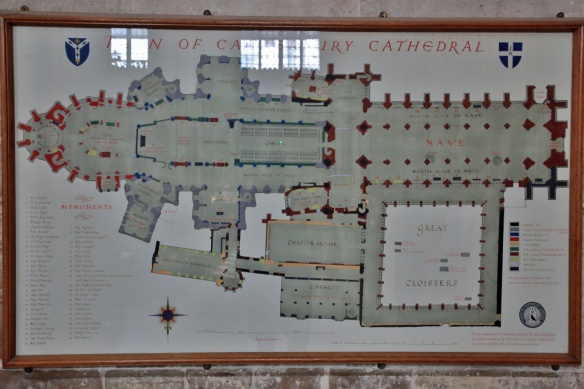 Augustine’s original building lies below the existing floor of the Nave. A later church, which was rebuilt and enlarged by the Saxons, was destroyed by fire in 1067. In 1070, the Church was significantly rebuilt by the Normans, following the arrival of William the Conqueror in 1066, at the Battle of Hastings. The cathedral has been extensively rebuilt and extended over the years.

Trinity Chapel (East end), which is the oldest section

The Cathedral is the seat of the Archbishop of Canterbury, with the current Archbishop (2013) being the 105th successor to Augustine.

Memorial to all former Archbishops of Canterbury

The 3 frames on the rear bulkhead list all Archbishops, with a continuous record since Augustine in 597 AD. When I zoom in on the original photo, I am able to read almost all the names.

We thoroughly enjoyed the guided tour, hosted by an excellent and very knowledgeable guide, who spent almost 2 hours walking us through the cathedral. The tour meeting place is the vicinity of the Nave pulpit. While waiting for our guide, the resident minister sat beside us and chatted. Very pleasant chap. Shortly before 11:00, he excused himself and headed to the pulpit to conduct the hourly prayer session.

On completion of prayers, our guide welcomed us and we set off on a most enjoyable and informative tour.

Nave – the Nave dates from the 14th Century and comprises Perpendicular Gothic Architecture.

Nave – centre section looking towards the entrance to the Quire

Nave – centre section looking down from stairs into The Quire

Restoration work is currently underway on The Nave and Tower, so they have constructed a raised platform to facilitate inspections of the higher reaches and prevent rubble falling on visitors. Scaffolding has also been erected on the exterior. 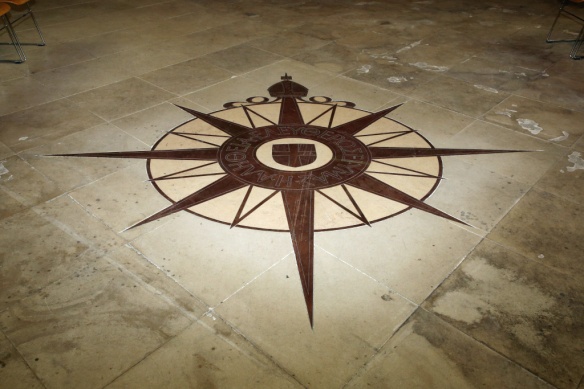 The above photo depicts, The Compass Rose, which is the worldwide symbol of Anglican Communion. It is located at the East end of the Nave just before the head table, as seen in one of the previous photographs.

Baptism Font on North side of The Nave 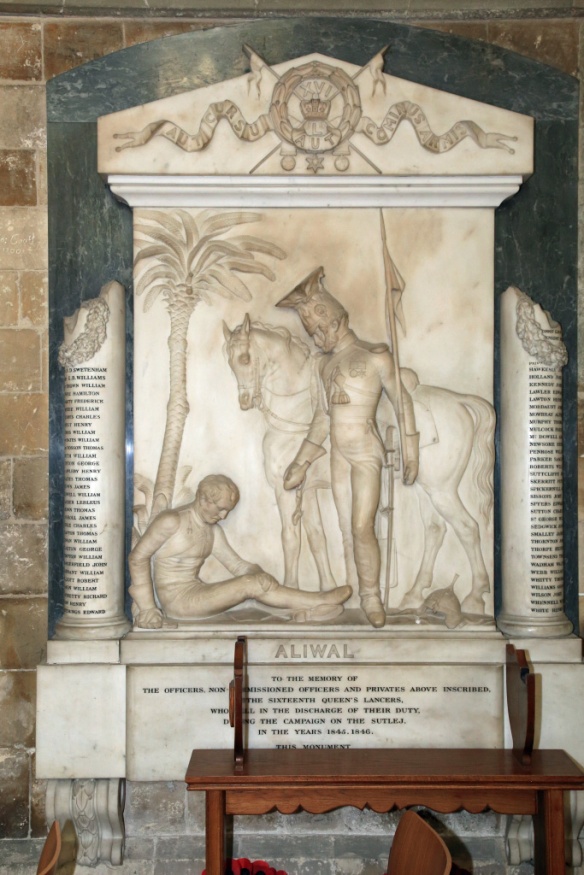 One of many memorials down both sides of The Nave

Martyrdom – or “Murder in the Cathedral. 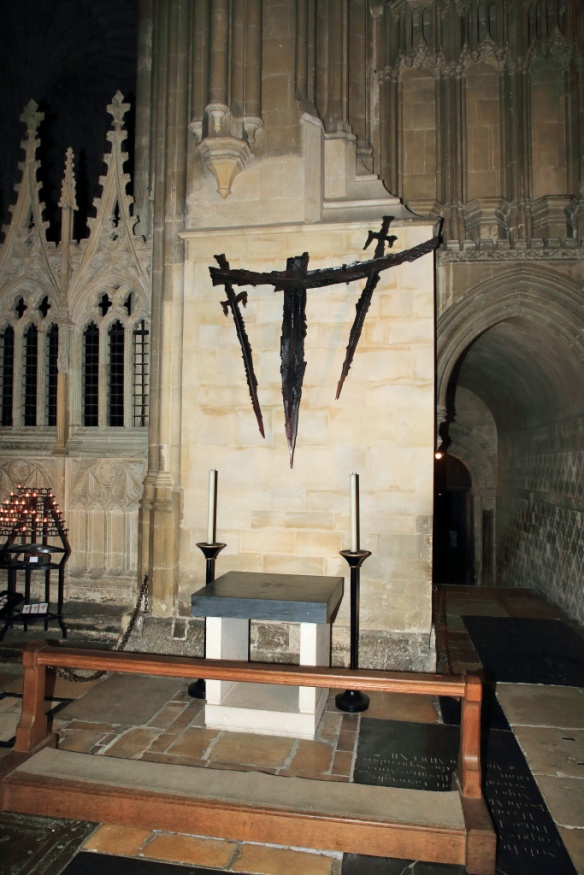 Thomas Becket was Archbishop of Canterbury from 1162 until his murder inside the Cathedral, at this spot, in 1170. Probably one of the most famous and better known Archbishops, he was embroiled in a long lasting dispute with then King, Henry II. It is said, the King dispatched 4 Knights to Canterbury, who murdered the Archbishop at this spot.

Cloisters & Chapter House – These areas are located on the north side, with Cloisters being a lawn area that connects the various parts of the monastery. The Chapter House was a daily meeting place for the monks.

Constructed about 1077, it was enlarged in the 1300’s and the current roof and windows installed in 1400 or 1500’s. The detail in the roof is simply amazing and is best viewed by the magnifying mirror located in the centre of the room. The roof looks impressive just looking up, but from the mirror, the details will take your breathe away. Sadly, I observed way too many people enter, take a quick look and then depart. Stained glass windows are installed at both ends, the East window depicts many important people in the history of the Cathedral, while the West window depicts scenes linked to people in the other window.

The Crypt –  No photography is permitted in The Crypt, or basement, which lies beneath the Quire and Trinity Chapel. The Eastern portion dates from the 11th Century and comprises classic Romanesque, or Norman Architecture, with highly intricate carved and curved pillars. Click here to view a photograph of the architecture from the British Library. Thomas Becket’s tomb was located in The Crypt from 1170 until 1220, when it was relocated to the Trinity Chapel above.

Bell Harry Tower – Ascending the stairs from the Nave to the Quire, if you look up you will see the base of the tower. 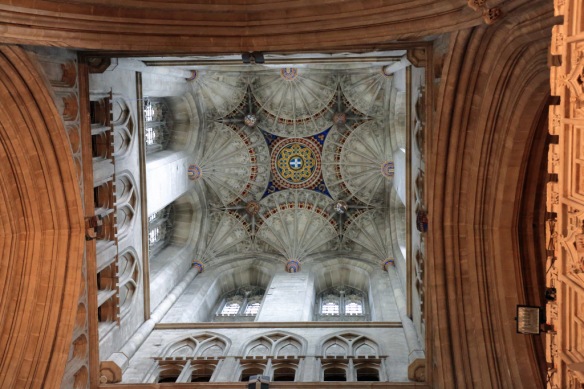 Base of the Bell Tower

Sadly, without zooming in, the photo does not do justice to the fan vaulted ceiling and the colours. A trap door is also incorporated to supply building materials during construction and the bell.

From The Nave showing the transition to The Quire

Quire & Trinity Chapel – The entrance from The Nave is up a set of stairs, where you are faced with a most intricately carved stone wall.

Entrance to The Quire

Dating from the 12th Century, the architecture is more Gothic, with pointed arches, rather than the rounded ones in the older Crypt.

The above photo showed the intricately carved benches for the choir in The Quire, looking back towards The Nave. 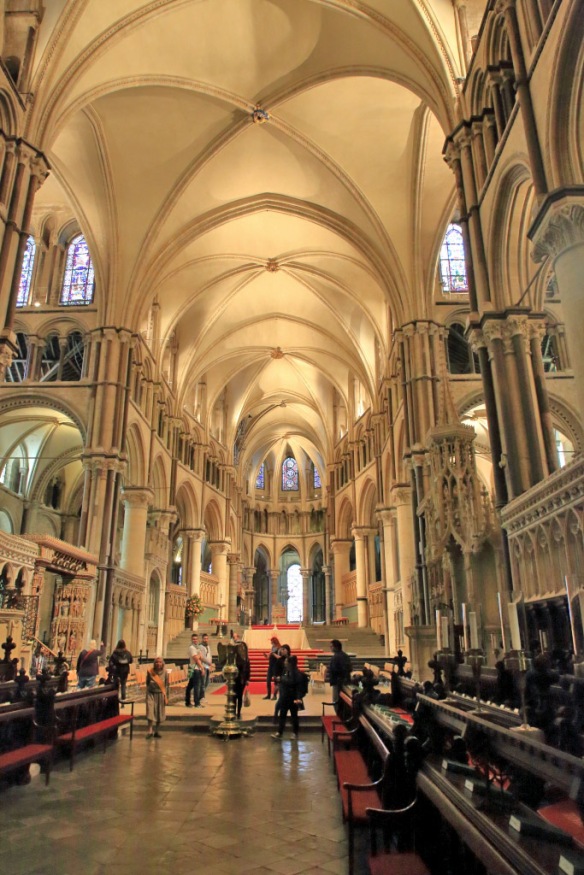 The Quire and roof

The above photograph was taken in The Quire, looking in the opposite direction from the previous photo. This one is looking up the 2 sets of stairs towards Trinity Chapel and again shows the more pointed arches on the roof.

Above photo was taken from The Quire and is looking East, up the stairs towards Trinity Chapel and the upper altar.

This area of the cathedral is also home to a number of tombs of royalty and warriors. 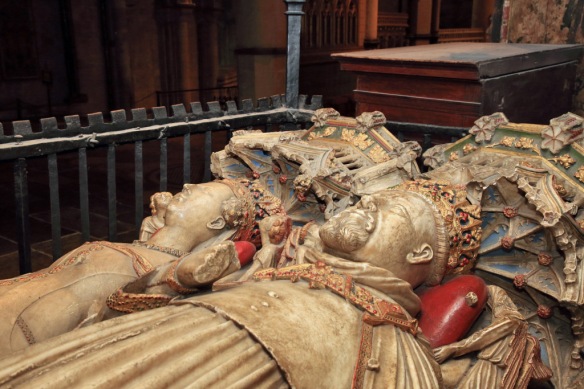 Tomb of King Henry IV and his wife 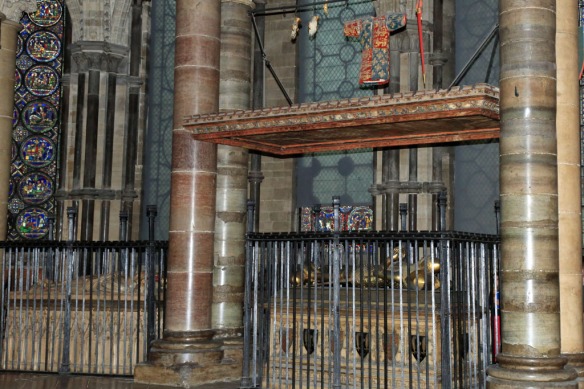 Tomb of Edward, Prince of Wales – The Black Prince

Each of the coloured patches is an intricately carved and painted design. 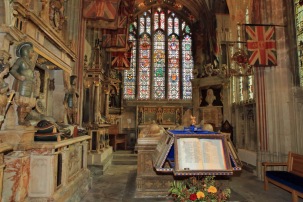 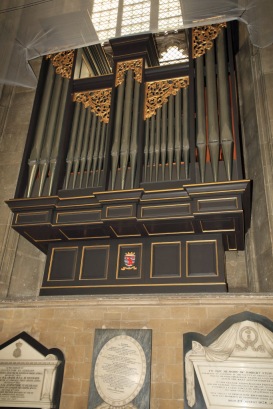 After our guided tour we started chatting with an Australian couple with a couple of young kids, who were also on our tour. We all visited the gift shop and then headed to a restaurant for a late lunch. We sat and chatted for a couple of hours. By the time we finished it was closing on 17:00, so headed to the bus stations, catching the bus back to the park & ride.

We didn’t have a chance to visit any other attractions in Canterbury, but the cathedral visit and guided tour was worth the time, as it is truly amazing.