While enjoying our breakfast at 15 Bed & Breakfast and chatting with hostess Lorraine, she asked about our plans for the day. Since it was a rather dull and overcast day, with heavy rain forecast late afternoon, we planned to visit the Historic Dockyard in Portsmouth. Rather than driving around to Portsmouth, Lorraine suggested following the Solent around to Gosport, parking in the long stay lot and taking the ferry across to Portsmouth. Sure beats the congestion around Fareham.

Parking cost about UKP 5.00 for the day, and the return on the ferry was UKP 3.50 for me and UKP 2.40 for Judi. Bonus, it saved driving in gridlock, which in retirement, is an activity I avoid with a passion.

With a single ferry in operation, it departs every 15 minutes, and after the short crossing, docks at the train and bus station, which is a short walk from the dockyard.

Having recently visited Chatham Dockyard, we eagerly anticipated visiting Portsmouth. Yes, it will be interesting to compare them, but more importantly, having seen where HMS Victory was built, we looked forward to touring the ship. However, HMS Warrior was first on the agenda.

In 1859, the French Navy launched La Gloire, the first steel hull warship. The HMS Warrior was the UK’s response. The ship was designed and built at The Thames Ironworks and Shipbuilding Company, of Blackwall in London. Working 24 hrs a day, she was launched only 4 months after the French ship. 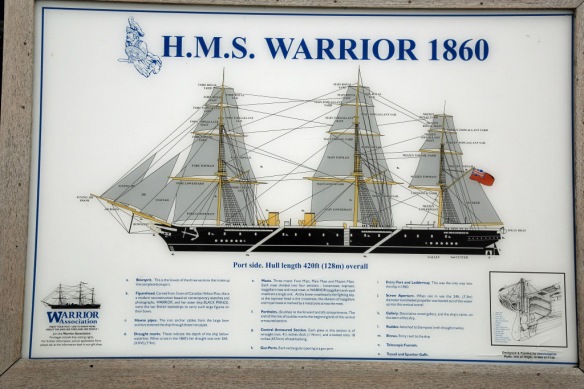 The revolutionary design comprised an armoured box protecting the guns, crew and machinery, which then had a bow and stern added to resemble a ship. The armoured box comprised 4″ thick plate bolted onto 18″ thick teak, which was then covered by the outer 1″ thick steel plate of the outer hull. Wow, the hull was almost 2 feet thick, just a little thicker than the 1/2″ or 3/8″ hulls I spent almost 40 years working aboard.

In addition to being steel hulled, she also was propelled by both steam and sail.

Steam valve, similar operation to steam ships I worked aboard 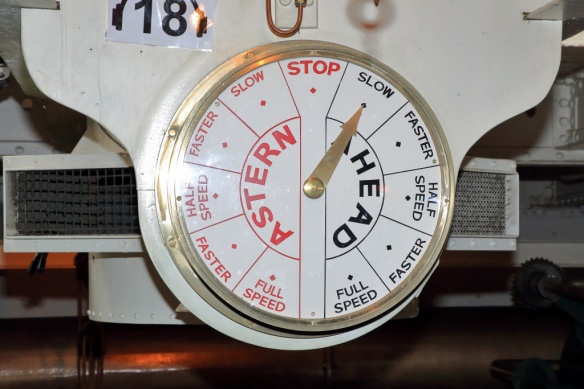 Engine room telegraph, again similar to many I sailed with

The engine and boilers were the most powerful ever fitted to a ship. Coupled with the other technological advances, she was considered the ultimate deterrent; consequently, she never fired a shot in battle throughout her RN service.

Fore deck with rigging for sails

The cannon aiming forward is interesting and was discussed at one of the presentations we attended at Chatham. Prior to the Battle of Trafalgar, enemy fleets used to run on parallel courses and blast each other with broadsides, using only 50% of their available guns. Admiral Nelson revolutionised naval warfare tactics by attacked on a course perpendicular to the French fleet, driving through the line of enemy ships. Once through the line he could fire from both sides of his ship.

At Chatham dockyard, they discussed this new tactic and how they could modify the construction. The strengthened the bow area and added forward facing cannon, so they could open fire earlier.

Rigging and funnels identify both steam and sail propulsion 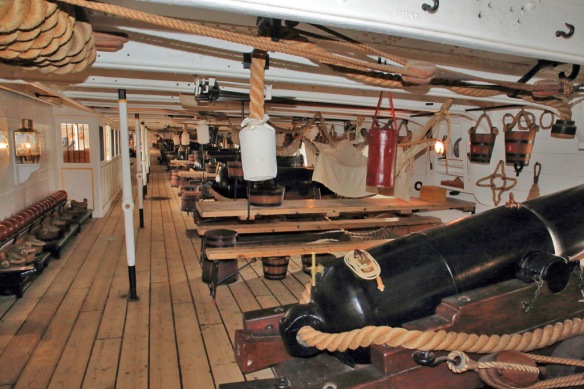 The Gun deck, which doubled as mess & accommodation

Each of the gun crews worked, ate and slept together, no cabins or even dorms were available for the ratings. Although the facilities aboard this ship provided a greater comfort and welfare for the crew, compared to the conditions on say HMS Victory. 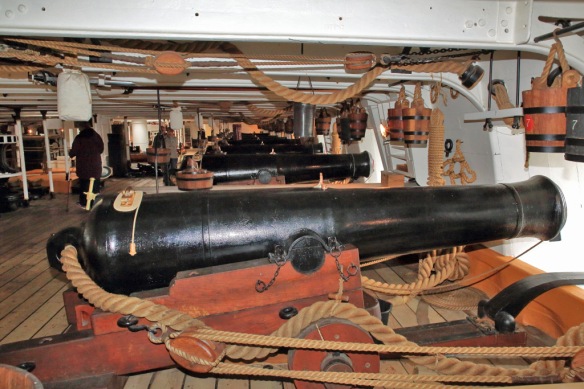 Shot for the 68 lbs cannons

Each cannon has a table between them, which is the messroom for each of the crews. One of the volunteers explained that each gun crew had a designated messman/boy, who fetched the meals from the galley and finished the preparation at the table, where they all sat to eat. When off-watch, hammocks were rigged above the tables and cannon and that is where the ratings slept. Just a little more primitive than my first ship, but not by much.

Rather opulent compared to the ratings, but as I am well aware, at sea, “Rank hath its privlidges”, or RHIP.

Officer cabin, with a cannon

Wow, that is impressive, especially compared to the tiny wheels or even single levers we use today. Might be powered by steam, but no power steering on this ship.

After visiting HMS Warrior, you return to the main entrance and coffee shop, before heading into the other parts of the dockyard. Excellent excuse to stop for a spot of tea and a scone. Suitably nourished and re-hydrated we headed to the far end of the dockyard towards the HMS Victory and the Mary Rose exhibit.

Shortly after ascending to the throne, King Henry VIII ordered 2 new ships in 1510, one of 400 tons and the other 300 tons. Both ships cost UKP 700, with the Mary Rose the larger of the 2, launched a year later. 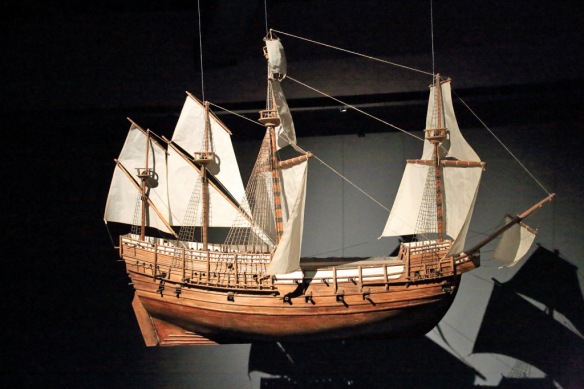 The Mary Rose, served the Navy in active service for 34 years and was involved in battles against the French, Scots and Brittany. In 1545, she sank in the Solent, off the northern tip of the Isle of Wight. Spending 437 years underwater, she was brought to the surface in 1982. Restoration took a further 35 years.

Click here for full story on re-surfacing the Mary Rose.

The Mary Rose exhibition is built over one of the small naval drydocks. The building comprises 3 levels, with viewing platforms on each level. The lower 2 levels have ceiling to floor windows for viewing the ship, but are completely sealed off from the drydock. However, on the 3rd level you enter an airlock, which leads to the actual drydock, looking directly down on the remains. The first thing that hit us was smell, the smell of old wood. It is a truly amazing sight.

Block rescued from the silt around the wreck 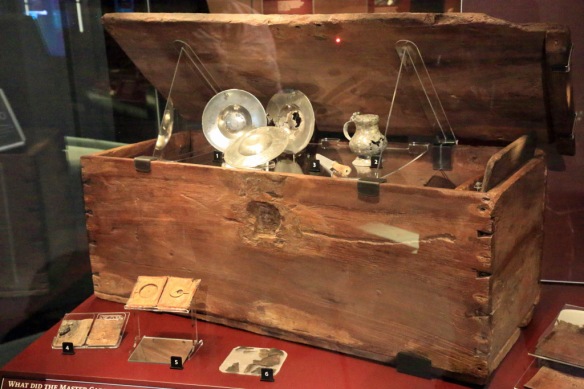 Chest and artifacts located in the Carpenter’s Cabin

Replica of the gun deck

Once the remains entered the dry-dock the rear caisson was secured in place.

The dockyard has numerous other attraction in Portsmouth and across in Gosport, but by the time we departed the Mary Rose, the dockyard was closing. Therefore, we stopped in a pub across the road for dinner, then caught the ferry back to Gosport.

A most enjoyable and informative day.