Driving through Salisbury, while heading to our first stop of the day at Boscombe Down, we noted the Petersfinger Park & Ride, right off the A36.

After a couple of hours at Boscombe Down Aviation Collection, we returned to Salisbury, arriving at the Petersfinger Park & Ride about 13:00. Parking is free and the return fare is UKP 4.00, for groups of up to 4 persons. Buses depart about every 15 minutes, with the last bus from town about 18:40, so that gave us about 5 hours to explore.

The bus dropped us off on Milford Street, which is right downtown and a short 5 to 10 minute walk from the cathedral. This post will cover our walk to the Cathedral, tour of the Cathedral and finally the Magna Carta, of which Salisbury has one of the four remaining original copies.

Shortly after departing the bus, we found Butcher’s Row, which may have been butcher shops at one time, but is now a row of cafes, pubs and bakeries that back onto market square. We stopped at a bakery for lunch and pot of tea, sitting out back on their patio.

It was also market day, so the square was covered with stalls and we listened to the adjacent fruit stall peddling their fresh strawberries.

I still remember their sales pitch, “Fresh English strawberries, 2 for UKP1.50”. We were sitting at Reeve Bakery patio, which is directly behind his stall, and thoroughly enjoyed listening to and watching the market. Departing the bakery, we took a quick wander through the stalls before heading to the Cathedral. 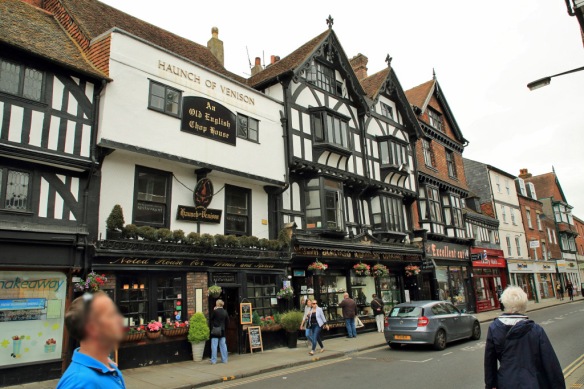 From Silver Street we turned left, heading down High Street, which quickly becomes a pedestrian precinct. 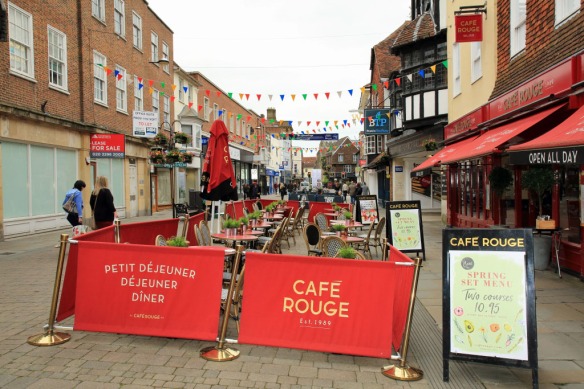 The downtown is well served with bars & cafes with roadside patios

This was one of the things we enjoyed most about Salisbury, as while the downtown is busy, you have numerous opportunities to sit outside in the fresh air and enjoy a snack or refreshment. 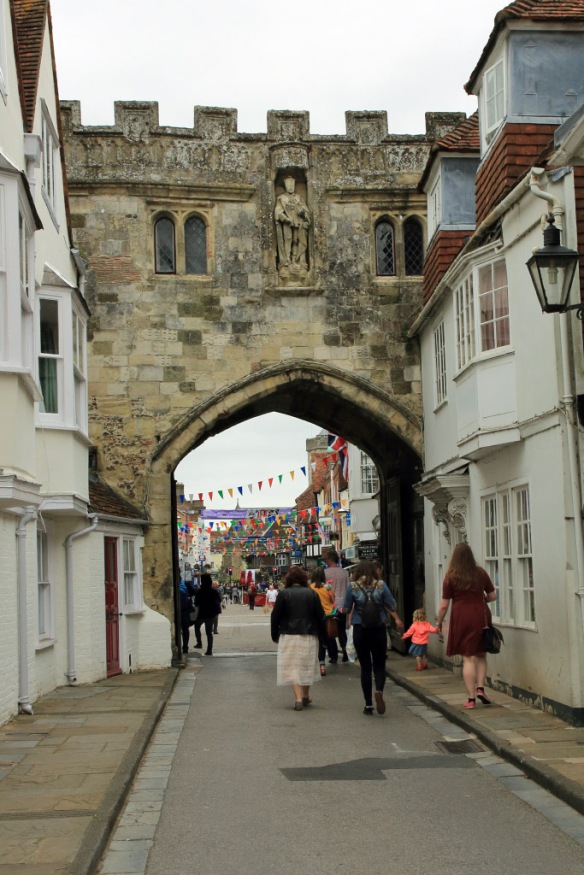 This is the main entrance to Cathedral Close, which was built between 1327 and 1342, and is a portion of the wall around Cathedral Precinct. As seen above, the Cathedral side has a statue of a single Knight, whereas the city side has a coat of arms. To this day, the gate closes daily at 23:00 and re-opens the following morning at 06:00.

The original cathedral required 70,000 tons of stone, 28,000 tons of oak and 420 tons of lead, and was designed in a single architectural style – early English Gothic. The tower, which was added between 1310 and 1330 is an additional 6,500 tons and is the highest medieval spire in UK, at 404 feet. The original iron cross from the top of the spire was replaced during a recent refurbishment, with the original located in the north aisle of the Nave.

Tower tours are available daily and require climbing over 330 stairs. I was definitely game, but unfortunately the last tour had already departed before we arrived. Book online, if you want to see the tower and spire.

West wall of The Nave

Entrance to the cathedral is from the Cloisters Square, which is accessed through the door immediately to the right of the west wall. They request a donation, with UKP 7.50 suggested for adults. A complimentary brochure is provided on entering the cathedral and free guided tours start about every hour.

Located at the west end, it is high, but rather narrow, as seen in photo below.

The Nave looking towards the West Wall & doors

The Nave has 3 distinct levels, the lower pointed arches, then a gallery, and finally a row of windows just below the ceiling. This provides lots of natural light, to view the contrast between the dark pillars and other lighter stone. 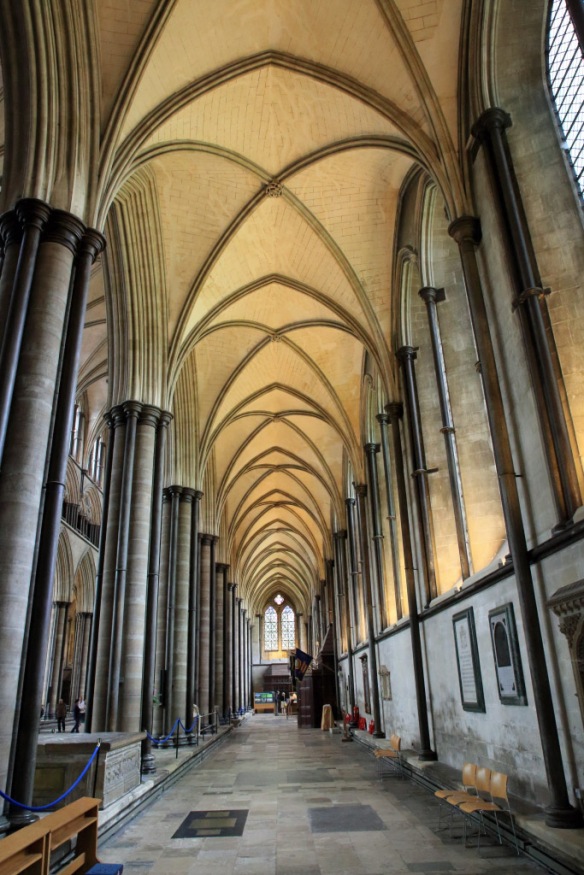 The Nave – display of the Wiltshire Regiment Colours

One of many stained glass windows providing lots of natural light

Reputed to be the world’s oldest clock, it was constructed from wrought iron about 1386.

The above clock, built about 1386, has no face, as in those days, clocks were designed solely to chime the hours on a bell. It was originally installed in the separate North Bell Tower, but the tower was demolished in 1792, when it was moved to the cathedral tower. It was replaced in 1884, with a new clock that was gifted by the Officers and Men of the Wiltshire Regiment. The medieval clock remained unused until it was discovered in 1929. It was completely restored and moved to the aisle in 1956.

Click here for an explanation of how it works.

During our tours, the guide discussed the weight of the tower (6,500 tons) and that the cathedral was built with very shallow foundations, only about 4 feet. This was a result of the high water table. They must manage the water table height closely and have holes drilled through the floor. He opened one, demonstrating the water table is only about 3 feet below the surface.

Base of the tower, between Nave & Quire

The Nave architecture and 3 distinct levels is continued into the Trancepts.

The middle section of the Cathedral, it has rich, solid wooden seats for the choirs.

Quire looking west towards the Nave 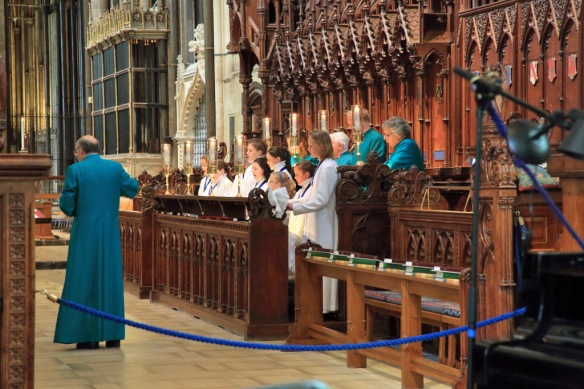 Located between the Quire and Trinity Chapel, it retains the same 3 level architecture as the Nave. The roof, however is more decorative.

One of the older tombs within the Cathedral

Tomb of Bishop Giles de Bridport, who died in the 1200’s.

Located at the eastern end, this is where they started construction.

Undoubtedly one of the world’s most important documents; its official title is Magna Carta Libertatum, or “The Great Charter of the Liberties”. Drafted by the Archbishop of Canterbury in 1215, it was a response to the feud between the very unpopular King John and the rebel Barons. The intent was to protect the Church, protect the people from illegal imprisonment, provide access to swift justice, limit feudal payments to the King and create a Baron’s council.

The Magna Carta, without actually stating the exact words is probably the first legal document to represent human rights, democracy and free speech. Although virtually none of it remains in UK Law to this day, it was most definitely the foundation for laws in the UK, many Commonwealth Countries and the U.S. Constitution. Although in UK, only 3 actual clauses remain. 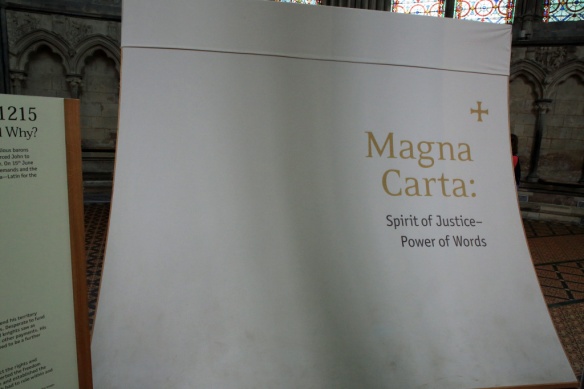 Salisbury Cathedral has one of the the 4 remaining original copies, which is displayed within the enclosure seen above. No photographs are permitted of the original, but they do provide a translated version on the rear of the display. I include a small piece of the text. The original is in Latin. 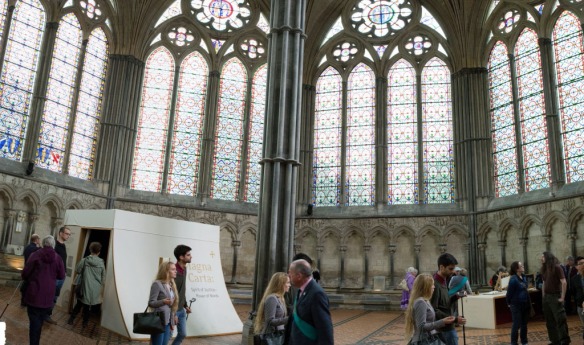 Chapter House is an octagonal room, with a slim central column that fans out to support the ceiling. A huge expanse of windows provides lots of natural light. 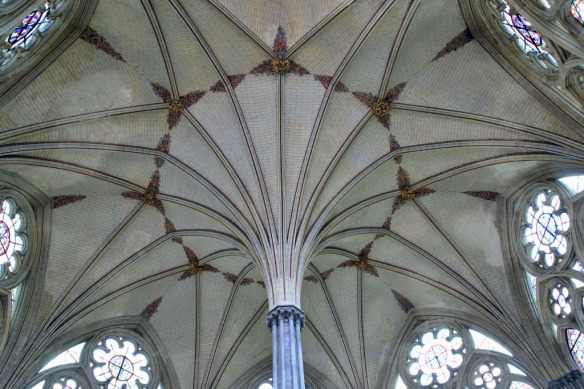 A most enjoyable tour, especially seeing one of the original copies of an 800 year old document that we covered extensively back in history classes.

After a quick trip through the gift shop, we headed back downtown, stopping at the Cornish Bakery, before catching the bus back to the park & ride.