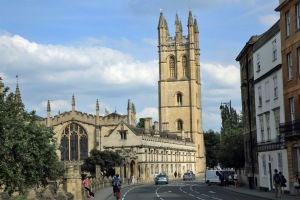 Having lived in St Andrews for many years, I looked forward to exploring another university town. Yes, similar to St. Andrews, most buildings in Oxford are connected with the university.

Considered as the oldest university in the English speaking world, the exact foundation date is unknown, but teaching is known to have existed from 1097, with rapid expansion over the next hundred years. University ratings are highly subjective and many raters vary widely with their results, however, The Higher Education World University Rankings rate Oxford, as the world’s number 1 university for 2016-17.

While we prefer rural B&B’s, I was unable to find one with good reviews, at a reasonable price and with ready access to public transport. Therefore, we opted for the Travelodge Abingdon Road. Located a couple of miles from downtown, it was only 1/4 mile from the bypass and it was adjacent to a park & ride. An almost new hotel, we found it modern, bright, reasonably comfortable and very well managed, with exceptional staff. The young lady at check-in was excellent, asking for our interests and plans, providing a number of relevant brochures.

Staying 2 nights, we had a single day to tour the city, which is a perfect recipe for the local sightseeing or Ho-Ho bus. Bonus – the sightseeing bus now operates from the adjacent park & ride, which was 150 yards from the hotel. The first bus departed at 10:00, with the last bus leaving downtown shortly before 18:00, so for UKP 28.00 we spent 8 hrs touring the colleges and sights of Oxford.

The park & ride loop took us downtown, where we boarded a City and University Loop bus, completing entire loop, which lasted about 90 mins. We then spent the afternoon walking around the downtown area.

The university is unique, in that it comprises 44 individual and independent colleges. Students applying to Oxford request a specific college(s), with many of them providing full accommodation and meals. Each year they receive about 5 applications for every spot available.

Located downtown, Christ Church College was formed in 1524 and is one of the larger colleges at Oxford, with over 600 students.

Named after the bell, Great Tom, this is the main entrance into the college, except for visitors. Visitor entrance is about 150 yard down the road, then through the gardens to the ticket office. 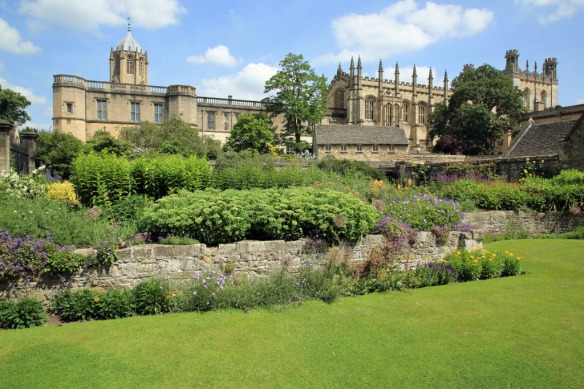 While it is a working academic and religious institution, it is open to visitors. Costs vary by month, with summer months being UKP 9.00/adults and UKP 8.00/seniors. This permits self guided visits to the Quad, Cloisters, Mess Hall and Cathedral.

This long hall is the messroom for Christ Church students, with all walls adorned with portraits of prominent previous students, dating back to the 1500’s. 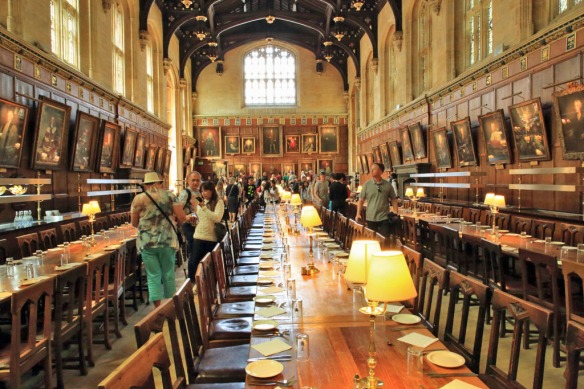 View of Christ Church Mess Hall from the entrance 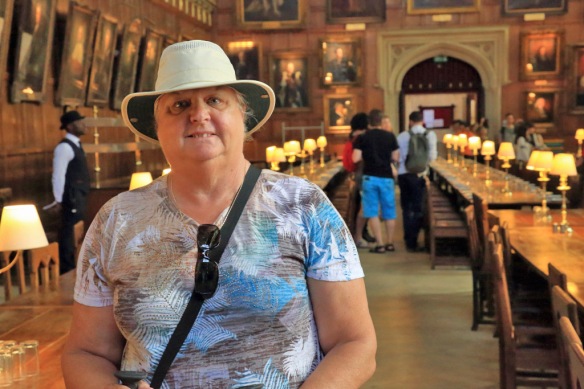 As seen above, the staff are all attired with bowler hats. They were all very pleasant and informative. We chatted with the chap stationed behind Judi. 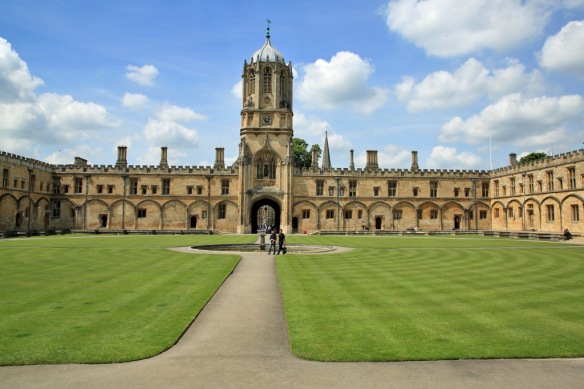 The college has a fully functioning cathedral, which is the college’s chapel. The Dean is also head of the college. 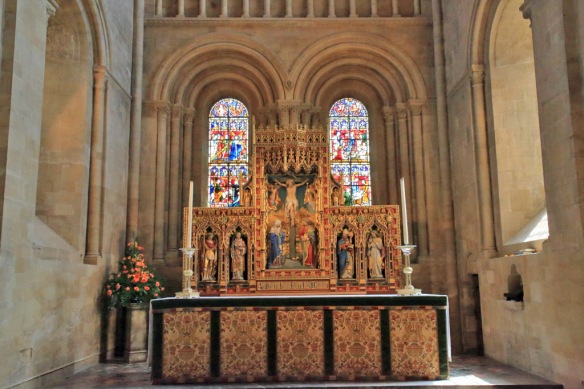 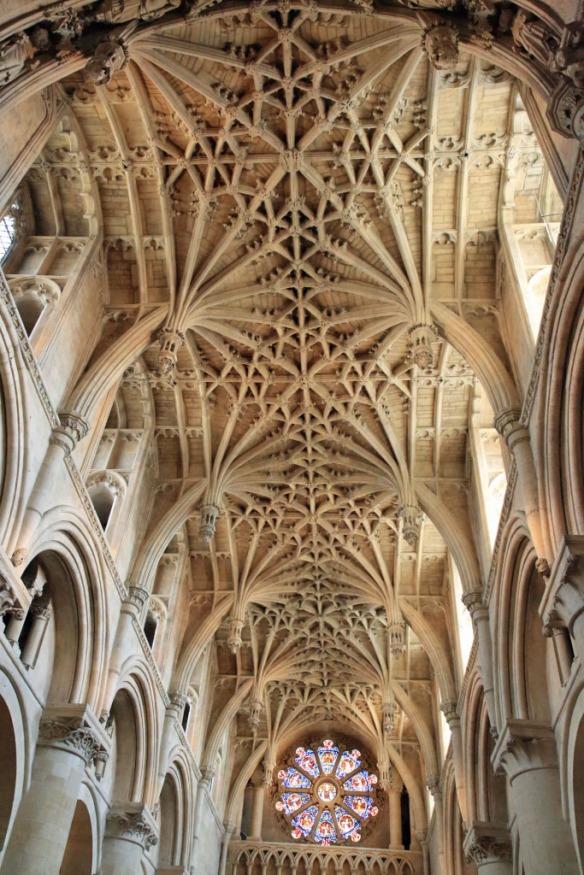 One of many stained glass windows

Almost all Christ College students live onsite in recently renovated rooms. Above is one of the residences. The tour exit is onto Merton Street, which has further colleges.

Merton College is one of the older colleges, having been founded in 1264. Previous students include TS Eliot and JRR Tolkein. 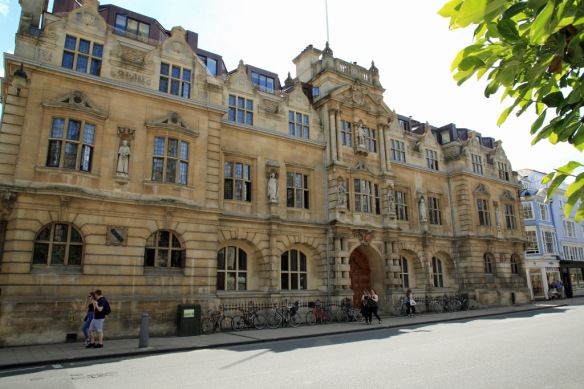 Oriel College is the 5th oldest of Oxford’s College, being founded in 1326. It has about 600 students and 100 academic staff.

Crossing the High Street, our next stop was the Covered Market, which is located downtown, with multiple entrances off High Street and Market Street. Founded in 1774, the historic market comprises over 40 shops, with about 50% selling foodstuffs – green grocers, butchers, fishmonger, bakeries, cafes, etc. The others are fashion wares, gift stores, flowers, jewelry, etc.

We stopped at one of the cafes, where Judi had lunch and I enjoyed a pot of tea and a scone. Escaping out the rear entrance onto Market Street, we headed up the narrow Turf Street towards Broad Street, which has a multitude of colleges and other attractions. 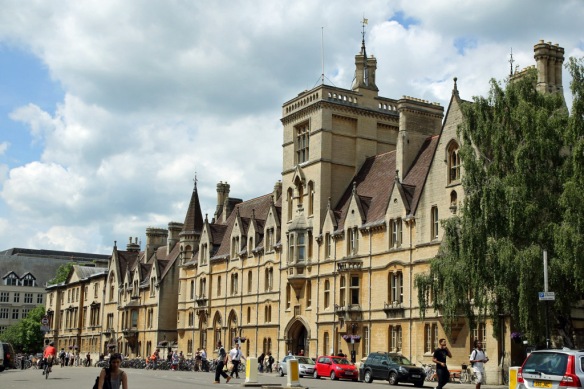 Founded in 1263, Balliol College is one of the oldest Oxford Colleges, but is also one of the largest, with about 750 students. 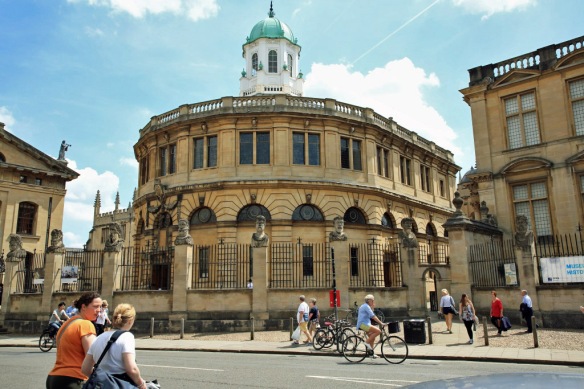 Located on Broad Street adjacent to the admission’s office and between the libraries, Built between 1664 and 1669, The Sheldonian Theatre is used for graduation ceremonies and can be rented for many other functions. 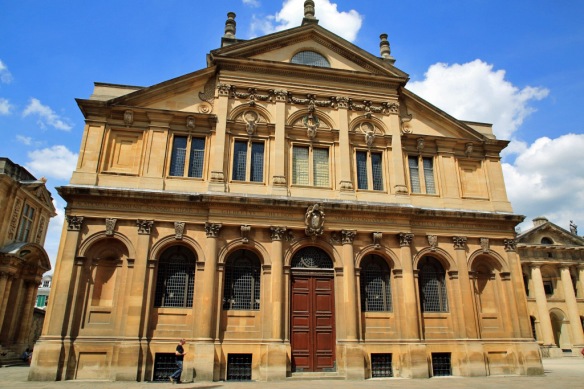 Also located on Broad Street, the Clarenden Building was built between 1711 to 1713. It was originally built for the Oxford free press, but is now the home of the Admissions Office and Bodleian Library Administration.

This was definitely the best tour in Oxford. Only the Mini Tour was available by the time we arrived, so for UKP 8.00 we received a guided tour of the Divinity Room & Duke Humfrey’s Library.

Note – about 100 stairs are required to access the library, as no lifts are available.

If you have the time, I suggest planning ahead and scheduling one of the extended tours, which get to see so much more.

Built between 1427 and 1483, the 15th Century Divinity School was originally used for theology lectures, exams and discussions. It is now the meeting place for tours and the area that graduating student gown up before heading to the theatre for the ceremony. We then climbed approximate 100 stairs, entering the Duke Humfrey Library, which contains numerous ancient books. 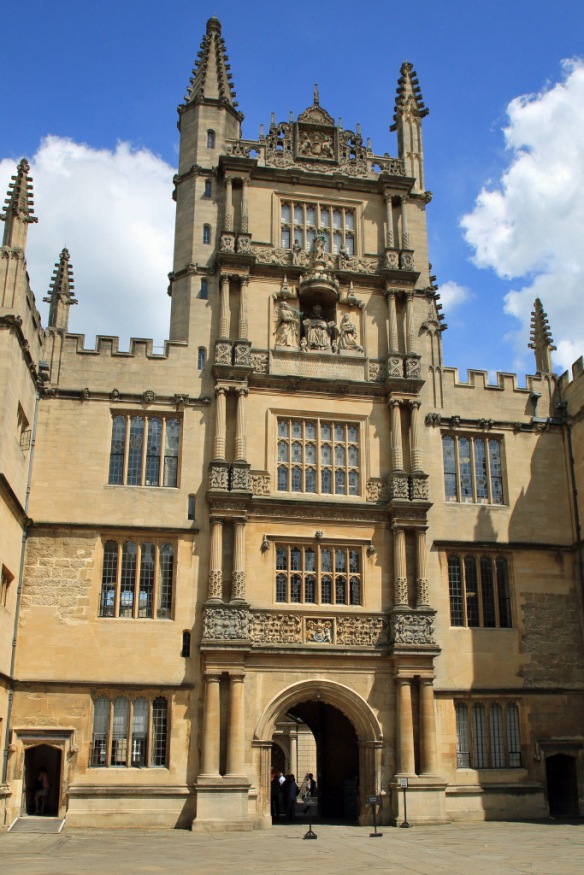 Bodleian Library – tower at one of the entrances

One of Europe’s oldest libraries, the first library started in 1320 at the adjacent church. In 1488 a new library was constructed above the Divinity School, which is the one we visited on the tour. In 1550, the library was purged of all books, but was rescued in 1598 by Sir Thomas Bodley. 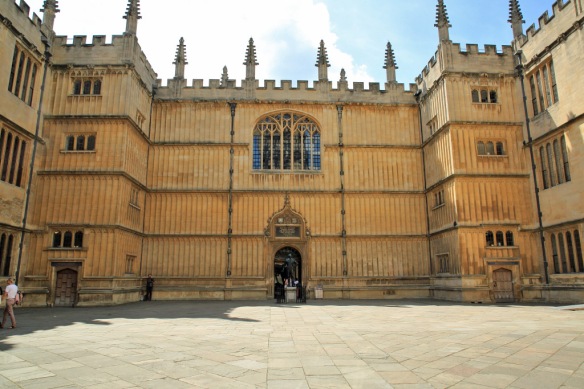 The library is currently 1 of 6 legal deposit libraries, which by legislation, are required to received every publication produced in UK. Therefore, the library receives about 1,000 publications every day. Our guide explained that all magazines, etc that contain free samples, have the printed material catalogued, with the additional samples also catalogued separately. If a Bodleian Reader requests a publication, they will receive any samples that originally came with the publication. 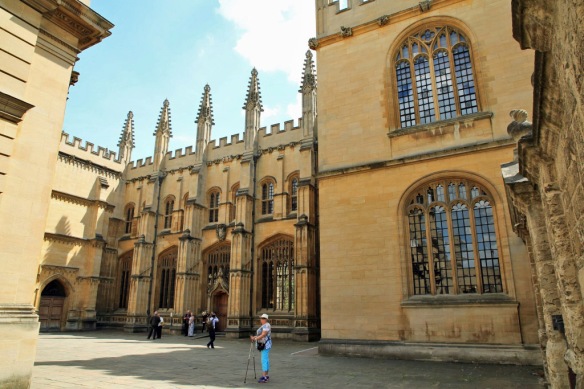 Completing the guided tour, Judi took a short break sitting on a wall facing the bridge of Sighs, while I went for a quick walk around the local streets. 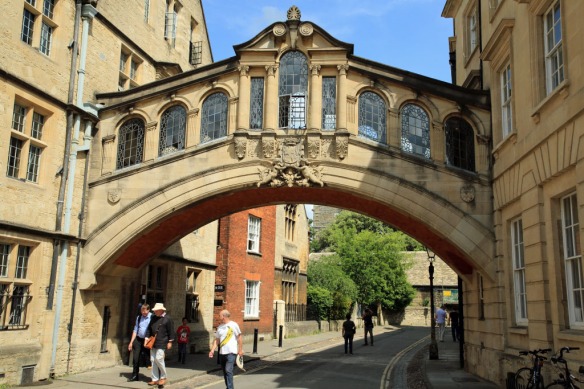 Hertford Bridge – referred to as Bridge of Sighs

The Hertford Bridge connects two parts of Hertford College and is commonly referred to as the Bridge of Sighs. However, it was never intended to replicate the Venice landmark, especially as it more closely Venice’s Rialto Bridge. 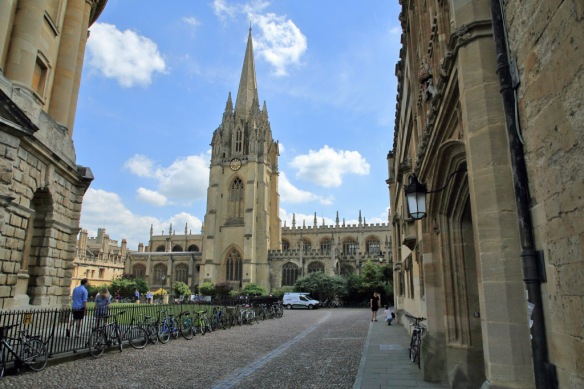 A church has existed on the current site of The University Church of St Mary the Virgin since 1086, with the tower built in the 1200’s. After I picked up Judi, we stopped at their cafe, enjoying a pleasant cup of tea and scones. 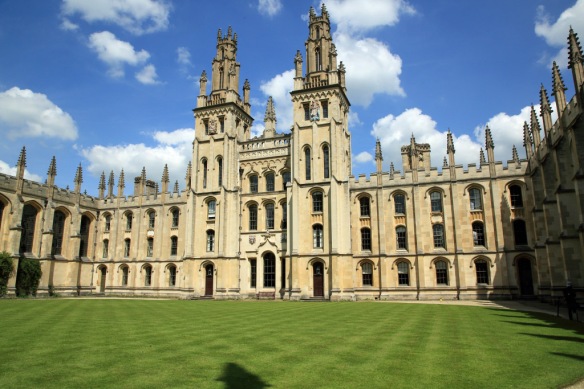 Founded in 1438, All Souls College, is unique in that it has no undergraduates. However they conduct extensive research projects. 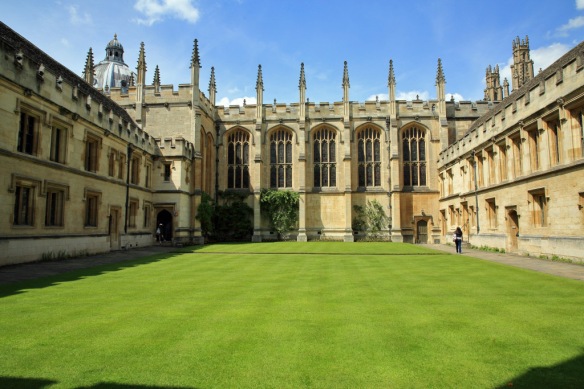 No guided tours were available, however, entry was free and everything was well signed. 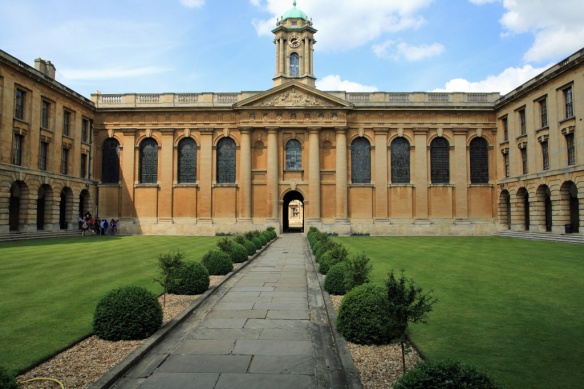 Founded in 1341, Queen’s College was not open to visitors, but we could snap a quick photo of the quadrangle.

Located on High Street, it was built between 1876 and 1882 and was originally built as the examination centre. To date it still host exams, but is also used as a conference centre and for business meetings. 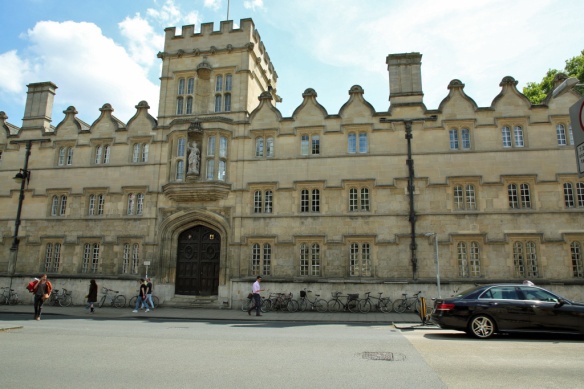 The oldest constituent college, University College was founded in 1249.

Approaching the time for the last bus, we wandered down High Street, towards one of the bus stops.

We caught the last bus, returning to the Park & Ride at about 18:00, after a fairly long and hot day. A most enjoyable day that was steeped in history.