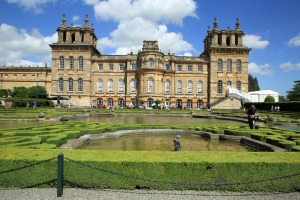 Blenheim Palace, located about 20 miles from Oxford has 2 claims to fame – it is the only palace in UK that is not a royal residence, and it was the birthplace of one of UK’s most famous Prime Ministers, Sir Winston Churchill.

Our visit coincided with one of the Nocturne concerts, which that night featured The Royal Philharmonic Orchestra. This resulted in some areas not being open and the home closing earlier than usual.

General John Churchill, the 1st Duke of Marlborough, commanded the UK Forces during the War of the Spanish Succession, winning many battles, including Blenheim in 1704. In recognition of his war efforts, the Monarch, Queen Anne provided the funding for the construction of Blenheim Palace, which started in 1705.

During our tour, the guide explained that the Duke must deliver a pennant, similar to the one above, before a specific date every year, to maintain ownership of the estate. With a huge home and 2,000 acres you wouldn’t want to miss the deadline. 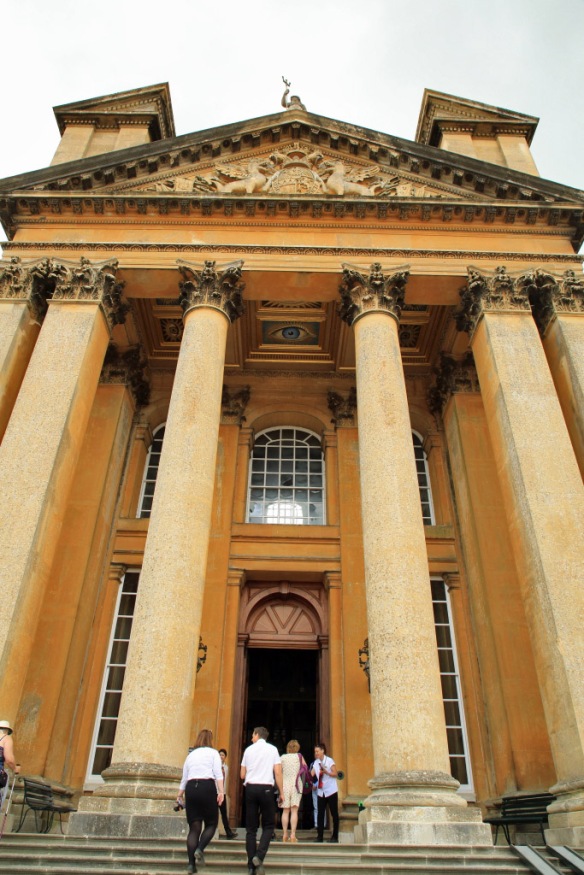 Entrance to the home

Blenheim Palace’s more recent claim to fame, is being the birthplace of Sir Winston Churchill, who was a nephew to the Duke. Entering the home you can visit the Churchill Museum and State Rooms on the lower floor, or an audio-visual presentation upstairs. 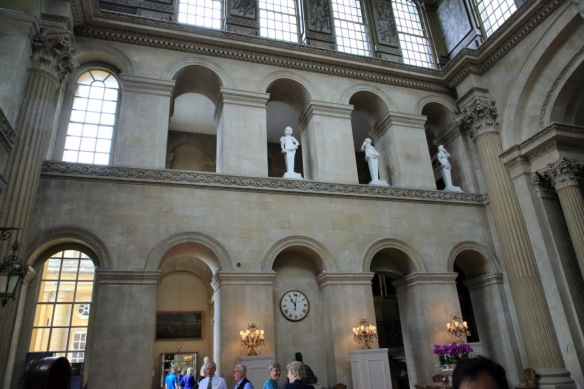 The foyer is huge, with polished marble floor and a ceiling that must be 50 to 60 feet high.

We opted to start with visiting the Churchill Museum, dedicated to the life of Sir Winston Churchill. 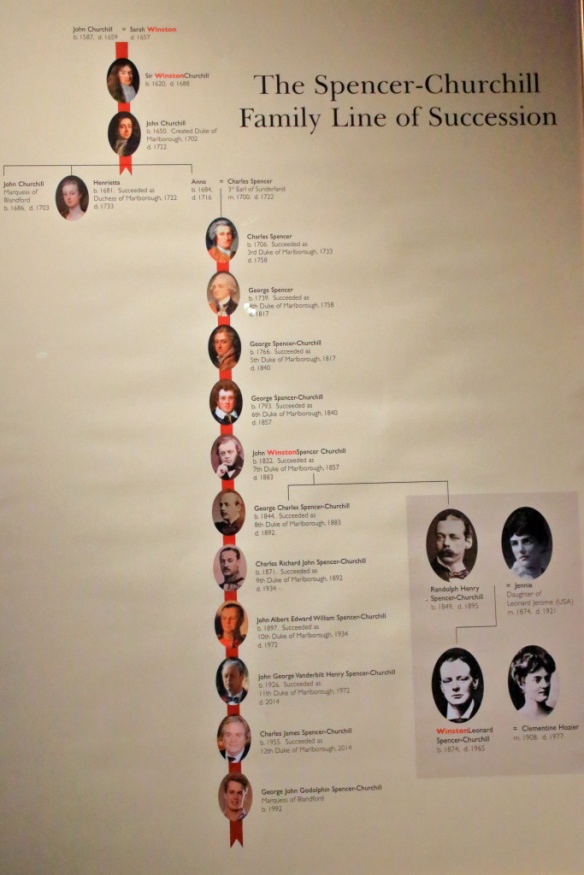 Although he was actually born at Blenheim, his dad was the 2nd son, so it was unlikely that his dad, or Winston would attain the title of Duke. However, he spent a large portion of his childhood at Blenheim. Receiving a commission in the army, he served in India, Sudan and South Africa. 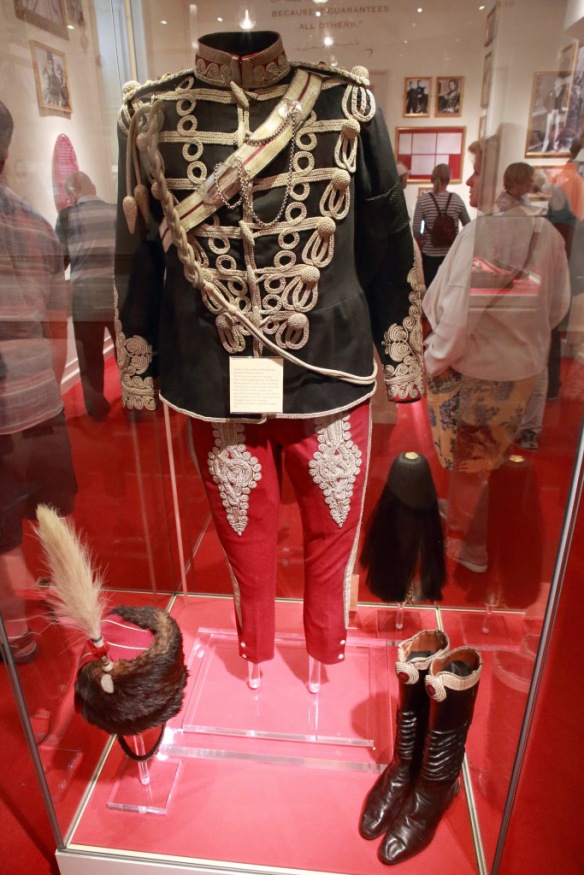 Dress uniform of Oxfordshire Hussars as worn by Churchill

Following his army career, they covered his life as a politician, ultimately serving as Prime Minister on 2 occasions. 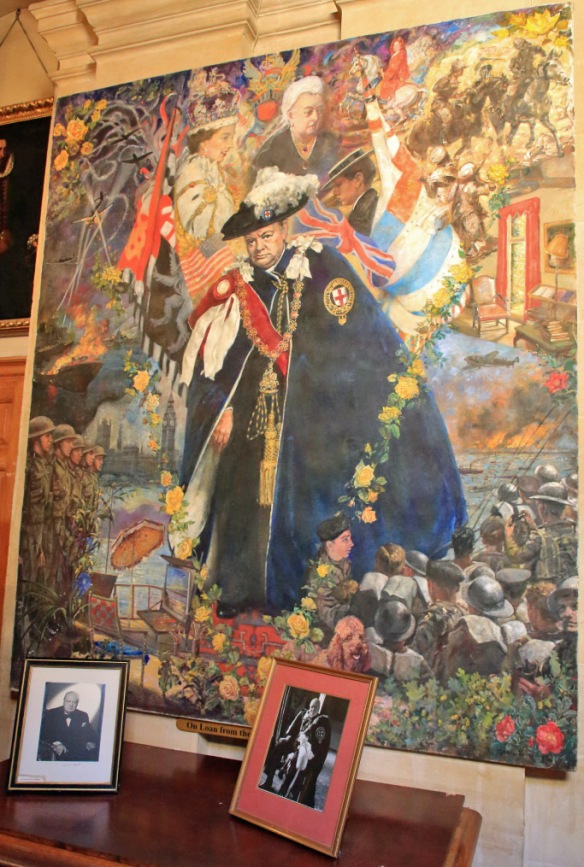 Completing the Winston Churchill Museum, we commenced walking through the State Rooms. About 1/2 way through we joined a group with a guide, who provided a constant stream of information.

First of the State Rooms

The first few State Rooms were based on the colour of the wallpaper, with a selection of old family portraits displayed on the walls. The ceilings and coves were also highly decorated. 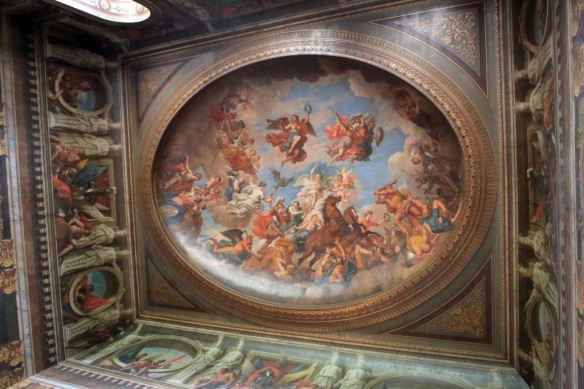 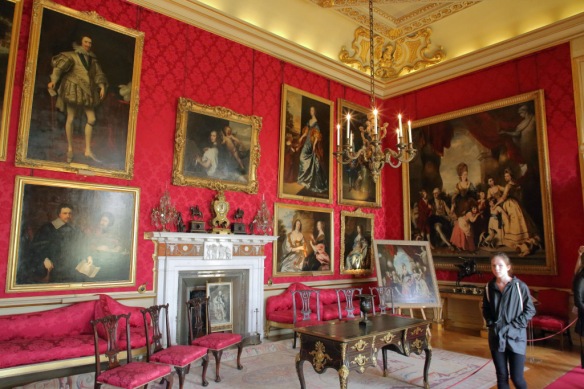 The next series of rooms commemorated the 1st Duke of Marlborough’s exploits in battle, which were represented in a series of tapestries.

Doorway between 2 of the rooms 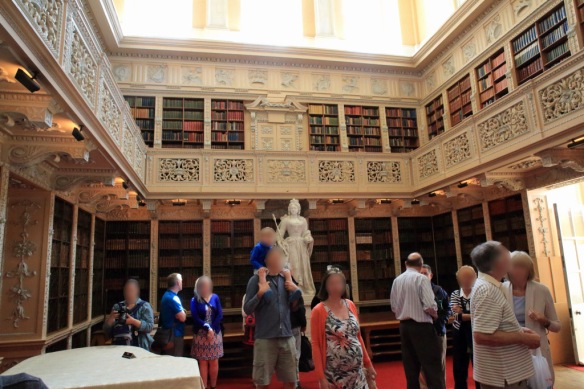 Library with statue of Queen Anne

Dinning room being set for a function 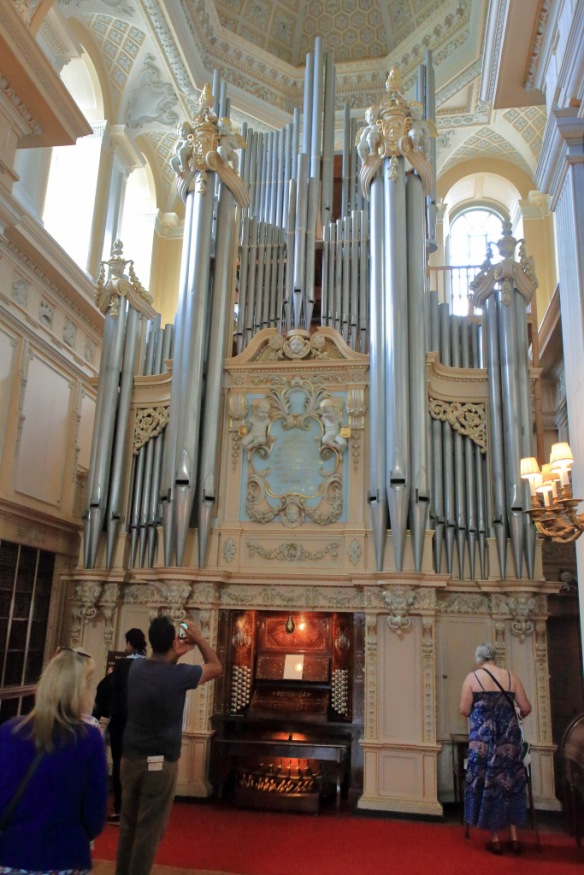 Organ at opposite end of dinning room from the library

Upstairs is an audio-visual presentation through a series of rooms that covers the family history. Each room contains a different story, as they take you from the 1st Duke through to the current family, which is the 12th Duke.

Before taking a wander through the extensive gardens, we visited the Water Terrace Cafe, one of 4 restaurants at the Palace. I enjoyed a pot of tea and scone, while Judi had a light lunch. With a view of the water terrace, this was an excellent starting point for touring the gardens.

Part of the water terrace

The entire water terrace was immaculate, with about a dozen gardeners working diligently, with no detail too small. 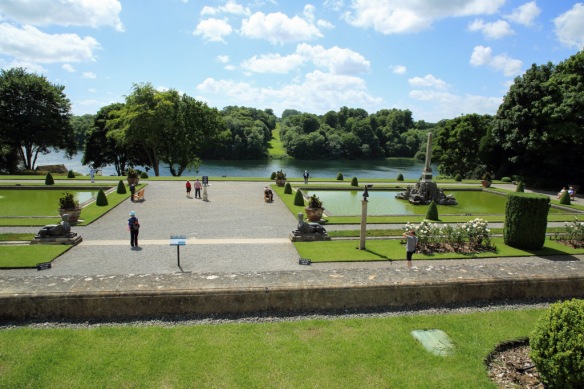 Judi enjoying lake views before setting off towards the waterfall

Leaving the water terrace we elected to complete the waterfall route, which follows along the lake to the waterfall at the end. The round trip is about 1.5 miles and is mostly gently undulating, with a short, moderate grade after the waterfall.

Looking up lake towards the Palace

View from top of waterfall

Judi at the waterfall

Ducks below the waterfall

Lawns heading back to the Palace

Some of the many large trees

Judi in the rose garden

The garden is semi-circular, with wild flowers along the fence. The walkway through the garden contains a timeline of the major events in his life, including receiving honourary US citizenship from Congress & President JF Kennedy. The gardens were built at the location where Churchill proposed to his future wife. 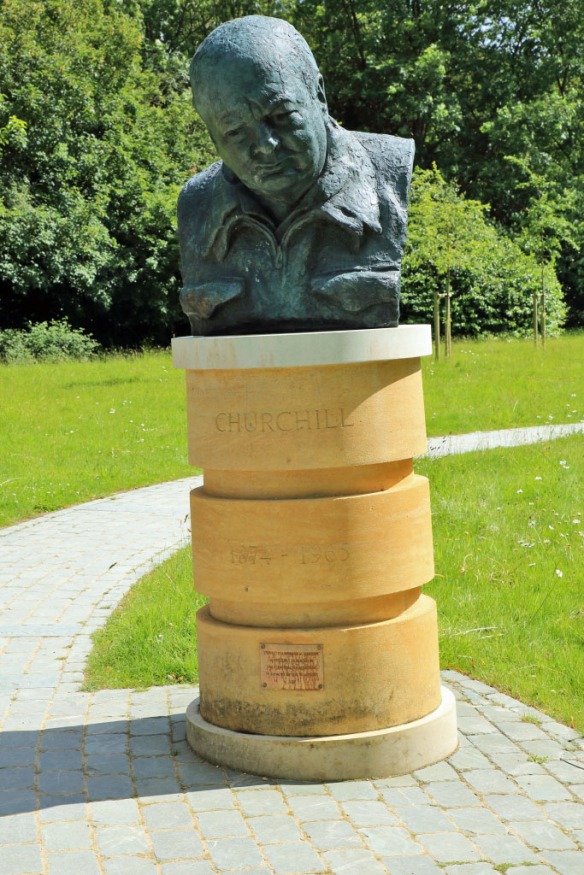 Returning to the palace, it was approaching closing time due to the concert. so we commenced the lengthy trek back to the car, to continue our adventure into the Cotswolds.

Aerial View of Palace and the grounds

In total, we spent about 6 hrs at Blenheim and attended or saw possibly 25%. To see it all, expect a full day, or allow for a couple of days at a leisurely pace. Some of the attractions we missed include: