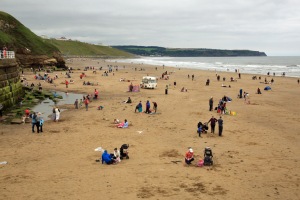 During our week in Yorkshire, while the weather forecast was consistent, sadly it called for daily rain. On day 3, the forecast comprised early morning rain, followed by mixed overcast and sunny periods. Since Whitby is about 50 miles, or over an hour drive from our condo in Thirsk, we hoped the rain would quit by the time we reached Whitby. Well, we didn’t see any sun, but at least it didn’t rain.

There isn’t a direct highway from Thirsk, so we elected the north circle around the moors via A19 and A171/A172. Prior to departing, I researched downtown parking, but on approaching the coast, we noted signs for a park & ride. Wow, great option. It was located on the outskirts of town, with lots of parking spaces and a clean, modern waiting room with toilets. Buses depart every 15 mins and cost UKP 2.50 for a return fare. No additional parking charges applied, so this was a great deal. The bus dropped us at the downtown bus loop, next to the train station. 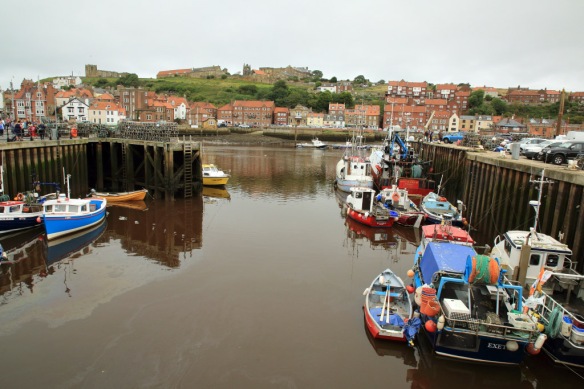 With no firm plans for the day, we disembarked the bus, crossed in front of the train station onto New Quay Road, heading to the harbour. Strolling along the banks of the River Esk, we passed a multitude of vendors hawking various cruises – fishing trips, old lifeboat, pirate boat, etc. None were overly tempting, so we continued across the swing bridge, on the aptly named Bridge Street.

Judi felt she could handle the hike up to Whitby Abbey, so on crossing the bridge we turned left on Church Street, which is one of many narrow, cobble-stoned and pedestrian friendly streets.

Church Street began a gentle climb, then we arrived at the bottom of the 199 steps up to the Church of Saint Mary and Whitby Abbey. 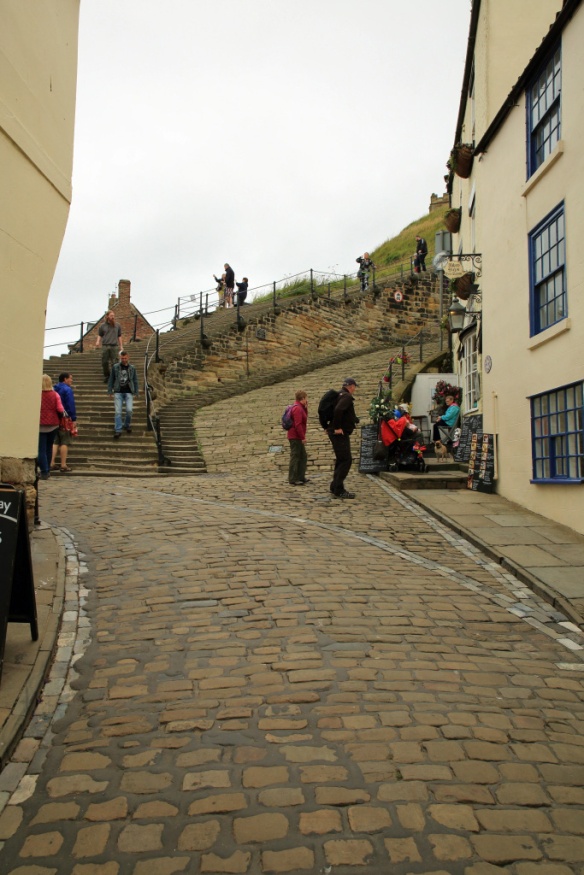 With the big curve in the stairs, it really didn’t look as taunting a task, than if they were straight and you could see all the way to the top. About 1/2 way up, we took a quick pit stop to reduce the heart rate and check out the views. 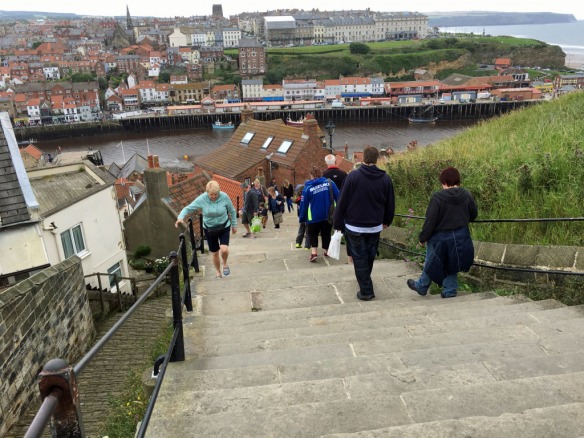 Top of the 199 stairs looking down

At the top of the steps is Church of Saint Mary, Whitby Abbey (ruins) and Whitby Brewery. We started off at the church, which had a very different interior. Each row of pews was almost in an individual fenced area, with the pulpit elevated.

The Whitby Abbey is an English Heritage facility, so they did not accept our National Trust memberships. Entry fee was UKP 8.40. In addition to walking around the ruins they have a small museum with various artifacts on display, a number of touch screen displays and the history of the Abbey. 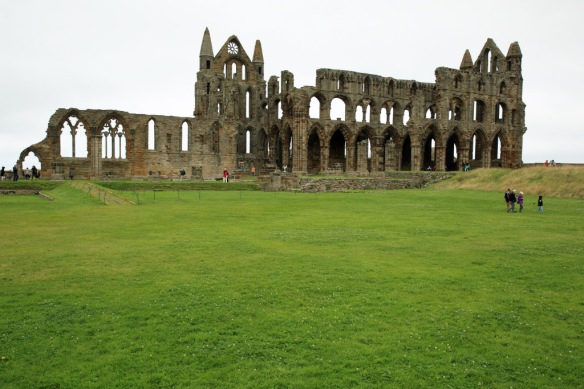 In addition to the church and abbey, they also have one of my favourite retail establishments – Whitby Brewery, a small craft brewery that has been brewing since 2013. They have an excellent selections of beers, but with a hour drive back to Thirsk, I elected to be good and skip the brewery. At home, Judi drives home after brewery visits, but I am the only driver listed on the insurance, and if truth be known, Judi really isn’t comfortable driving on the other side of the road. I learned on the left, so have no problem switching back and forth.

If you would rather skip the stairs, I noted the local Ho-Ho bus has a stop right outside the Abbey.

Whitby and inner harbour from top of steps

We decided to head back down to find a restaurant for lunch. Most of the chippies either had big queues or smelled fishy, which is never a good advert for fresh fish. The Humble Pie and Mash on Church Street looked interesting, being located in a renovated 1700’s building. They have a simple menu of about 6 pies, all made fresh daily. You select the pie, which is served with mashed tatties, gravy and a choice of mushy or garden peas. All pie meals are UKP 5.99, an excellent deal. I tried the Yorkshire Sausage and Black Pudding pie, which was excellent. They don’t have a licence, but encourage you visit one of the local pubs and bring a drink back to the restaurant. Excellent service.

Completely stuffed, we wandered along the network of narrow street, while Judi checked out a number of shops. We then headed back across the bridge, heading out Pier Road, spending about an hour at the RNLI Museum. Entry is free, with a donation suggested. The museum tells the story of the many volunteers over the years and has an old lifeboat on display. While a small museum, it was actually very interesting. 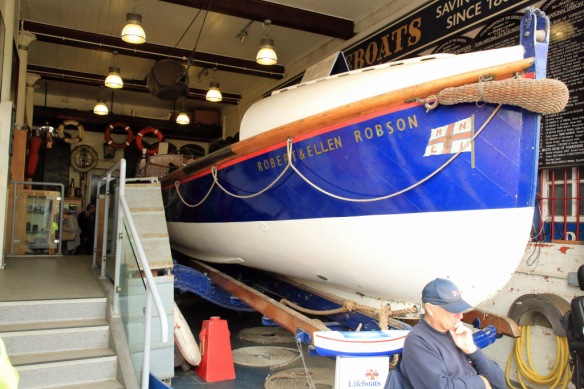 Departing the museum we headed out the promenade, where Judi sat on a bench watching boats entering and leaving the harbour, while I walked out to the end of the breakwater. 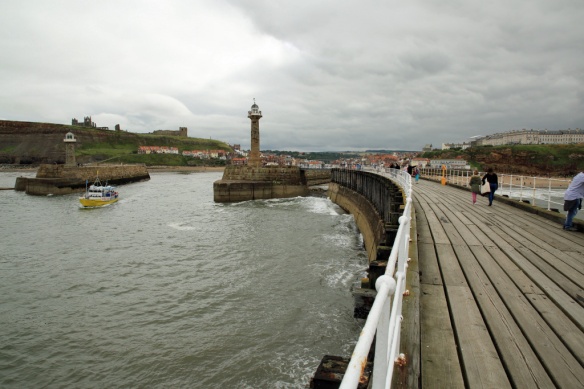 End section of breakwater looking back to the harbour entrance 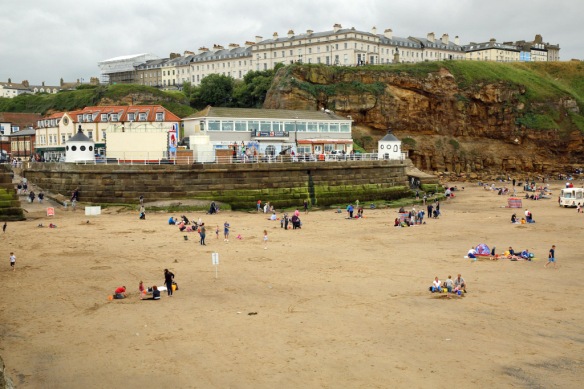 View of beach & foreshore from end of breakwater

Time was marching on and we still had over an hour drive back to the condo, so we took a slow stroll along the river back to the bus station to catch the park and ride bus.

The one local attraction we missed was the Capt Cook Museum. Unfortunately we just ran out of time, but we visited a museum in his home town the day before and have visited sites in Hawaii and Tahiti.

In summary, while Whitby is a busy tourist seaside resort, it definitely is not another Blackpool or Brighton. It is more understated, without the pier and plethora of loud amusements. We thoroughly enjoyed our day, with an interesting mixture of historical sites, harbour, beach and pedestrian friendly shopping.