Our first day in Henley-on Thames was a pleasant day, with partly cloudy skies and temperatures approaching more like summers norms. Based of the summer weather, to date, this was probably going to be our best day in Henley, so we elected to explore the town, and take a short cruise on the River Thames.

After breakfast we headed out the rear door heading down the path to the Town Hall building, which is at the entrance to the downtown area.

A great start to the day, the Town Hall has a number of flower baskets around the entrance, which is rather picturesque. The above photo was taken from the stairs, looking down Market Place, which on one side is pedestrian friendly, with lots of flower gardens and patio seating. The Farmer’s Market sets up in this area on – 2nd Saturday, 4th Thursday and 5th Sunday of the month. We arrived on the 1st Saturday in August, so unfortunately we did not see the market.

From Market Place, we headed to the train station parking lot to check out the car, passing the Imperial Hotel, which we thought had exceptional curb appeal.

Next of the agenda was a Thames River Cruise with Hobbs of Henley, which is located at the end of Station Road, by the river. While they offer self-drive boats and a plethora of special cruises, on the Sunday we were in town, they only had a 1-hour cruise between Marsh and Hambleden Locks. 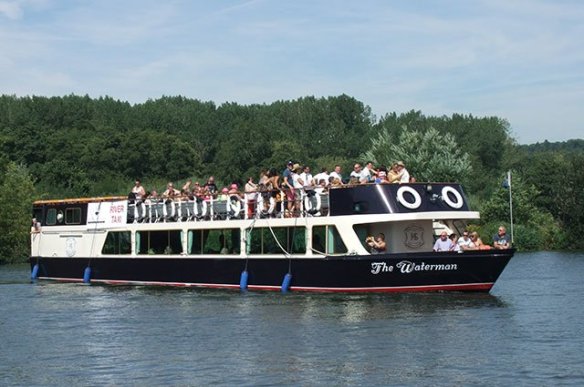 Tickets can be purchased on the dock, or online – adult UKP 10.00, seniors (60+) UKP 8.00. After purchasing our tickets, we boarded The Waterman, which had 2 decks. Being a reasonably sunny day, we headed up to the open top deck and had about 20 minutes enjoying the scenery and sunshine, before departure at Noon. 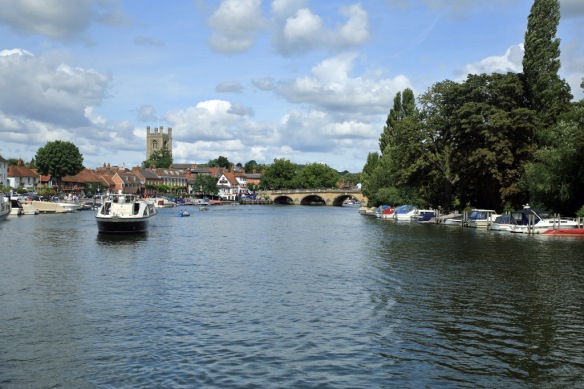 Alongside the dock looking astern at White Hill bridge

We departed, on schedule at noon, heading up river, or west, towards Marsh Lock. 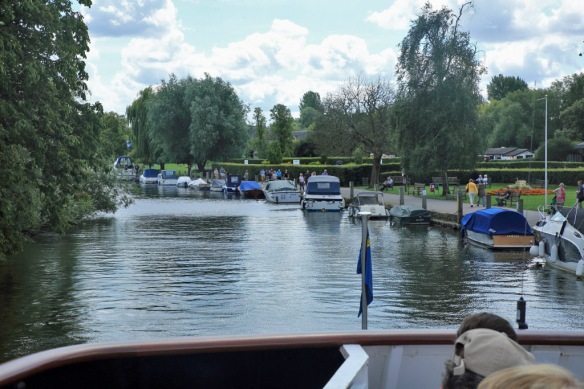 River Thames splits with an island in the middle

The right hand or north bank is continuous boat moorings, with a tow path that goes from Henley to well past Marsh Lock, where we turned around. They also have a large park with a bandstand, which was hosting an afternoon concert.

Approaching the 2nd island, which is inhabited

Living on an island in middle of Thames, that has no bridge

Huge park along the north bank of the Thames

The tow path, as seen above, crosses the river onto the island at Marsh Lock, giving great views of the lock in operation. This was the western extent of our cruise, so we turned around and headed back down river.

At Marsh Locks heading back down river

Family of swans with park in background 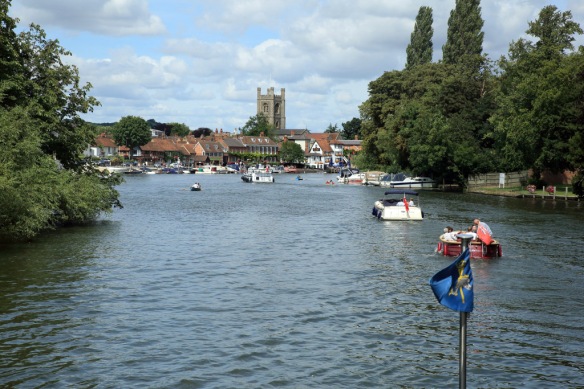 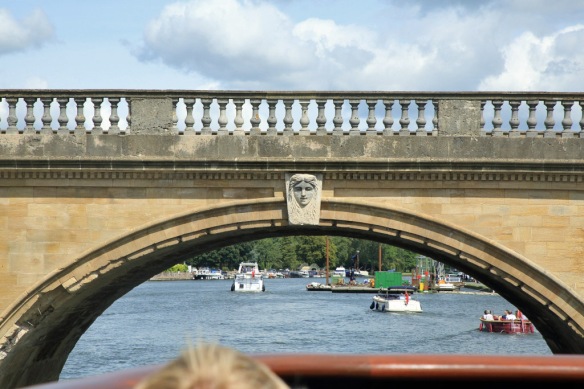 The bridge had minimal clearance so those of us standing, were requested to kneel down well before reaching the bridge.

The above row houses on Wharfe Lane have garages and cars parked out front and docks with boats at their back doors. Just outside London, I can’t imagine the cost. 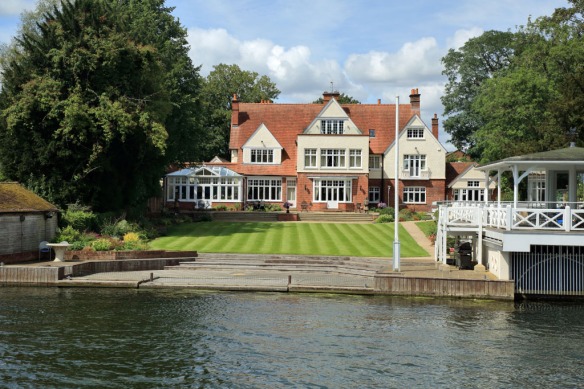 Another waterfront mansion with putting green lawn and boat house

A private members club dating from the early 1900’s that is located close to the finish line of the Henley Regatta. 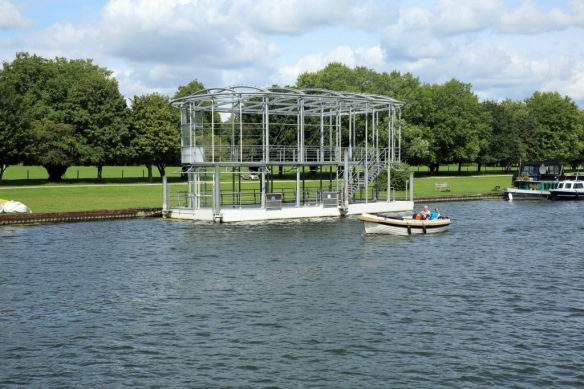 As we sailed down river towards Hambleden Locks we were heading the wrong way down the regatta course, which heads up river, against the current. 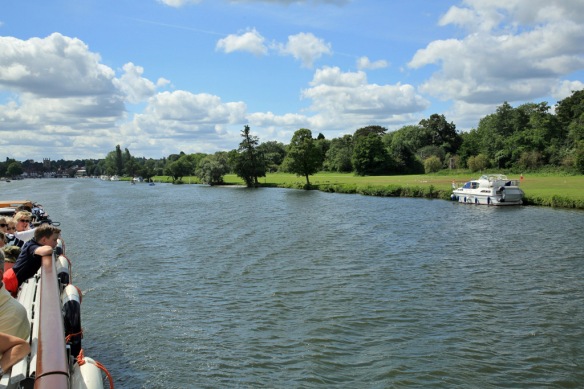 Looking down river along the Henley Regatta course from finish line

Built in the 1770’s, the building on Temple Island started life as a fishing lodge for the island’s owners. Being the starting point for the regatta, the island is now owned by the Regatta, on a 999 year lease.

Approaching the final bend in the River Thames

Just past the boat secured to the left bank, we turned around and headed back to the dock.

After a most enjoyable hour cruising along the Thames on a splendid day, we headed along the towpath for a stroll. At the end of the park we visited the Henley River & Rowing Museum. Admission prices are UKP 12.50 (adult) & UKP 11.50 (Seniors 65+). We headed upstairs where 1 section is packed with information on the River Thames.

The above exhibit was in the river section and is a medieval log boat dating from about 1030. They also provided lots of information on how they are controlling the historic tendency for extensive flooding using locks, etc.

Rowing section of the museum

We spent a couple of hours wandering through the exhibits, then headed back downstairs to the cafe, enjoying a pot of tea and scones on the patio.

Departing the museum we returned to downtown Henley, stopping at a bench close to the bandstand, listening to the complimentary concert. I suspect it was a regular occurrence, as many people brought their deck chairs and were dotted around the park, enjoying the music.

We continued past the cruise dock, along Thameside Road towards the White Hill bridge.

View up river from bridge

We considered stopping at the Angel on the Bridge, sitting on the patio with a beer and watching boats on the river. Unfortunately, many others had similar plans and the patio was full. Therefore, we continued towards the Market Square.

Returning to Market Square we headed to the Grey’s Road parking lot, which has the entrance to Henley’s craft brewery – Lovibonds Brewery.

The brewery was actually rather difficult to find, as we had to ask some locals for directions. It’s entrance is off a back corner of the parking lot. They had about 4 beers available, so I tried the IPA. We sat outside at one of the picnic tables, enjoying both the beer and sunshine.

From the brewery, it was a short walk back to the Barge Inn, where we enjoyed the Sunday roast dinners the owners saved for our return.