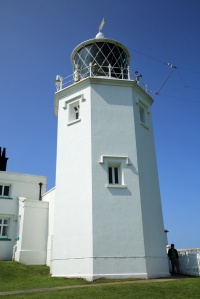 Cornwall is the final stop on our current UK travels. We originally planned a week, but cut it back to 5 days, so we could attend the final show at the Edinburgh Royal Military Tattoo.

However, the passing of a long time family friend required a change of plans, giving us a single night in Cornwall. Our original detailed 5-day plan was curtailed to include the following objectives:

After an almost 11 hour day of driving and sight-seeing, we achieved our 5 objectives, then the following day, we drove the 550+ miles back to St. Andrews.

On a Saturday in mid-August, with almost 200 miles to drive on crowded, mostly 2-lane roads and lots of planned sight-seeing, we were up early, getting the car loaded and departing the condo about 08:30. The fastest route to our next destination (Clowance Estates) was just over 100 miles, but we would have missed both Lizard Point and Land’s End. Therefore, we opted for the much slower roads of south Cornwall.

Departing Newton Abbott, we made great progress on the A38 (Devon Expressway), which was dual carriageway to the Cornish border. In Cornwall, the road changed to 2-lanes and traffic volumes increased significantly, with a consequential substantial reduction in speed. Therefore, we arrived at Lizard Point in the late morning.

In addition to being the most southerly point in UK, the Lizard Peninsula has numerous attractions, beaches and points of interest. Before curtailing our Cornwall trip, we had planned to spend an entire day on the Lizard Peninsula. However, our revised plan had a visit to the lighthouse and lunch.

We parked in the National Trust parking lot, taking the short walk to the museum, where you can purchase tickets for the lighthouse tour. Our timing was perfect, as a group was just starting. Our guide was a volunteer, who provided an excellent tour.

We started outside, where he discussed the light’s specifications and the life of the lighthouse keepers back in the days when the lights were actually manned. The light produces a white flash every 3 seconds, to a distance of 26 miles. Initially illuminated with 2 separate lights in 1751, it reverted to a single light in 1903 when the west tower was decommissioned. Trinity House automated and de-manned the light in 1998. The keepers lived in the cottages between both lights and were required to tend the light(s) every hour.

Inside the light, we climbed up to the first level that contains most of the automation equipment. We then took the final stairs up to the Fresnel Lens and were amazed how small the bulb is, being less than 100 Watts. An excellent tour, which lasted about 3/4 hr. 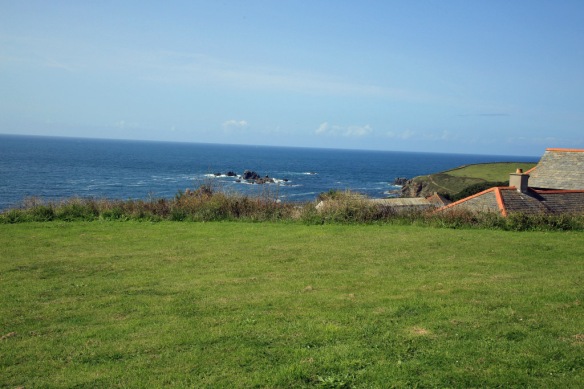 Looking out to sea from Lizard Point Ligthouse

Some other local attractions are the SW Coastal Path, Marconi Wireless Centre, RNLI lifeboat station and a number of beaches. After a quick trip through the museum/heritage centre, we returned to the car, heading for a quick lunch.

Time to tick-off another of the day’s objectives, as I ordered one of their original Cornish pasties, pot of tea and a scone. Excellent lunch in a small cafe.

Land’s End, our next destination, was about 35 miles, but we took a longer and more scenic route along the coast. We departed the A394 onto Turnpike Road towards Marazion/Penzance. Before curtailing our time in Cornwall, we had planned for a walk over the causeway to St Michael’s Mount, which is about 400 yds offshore.

From Marazion, we continued to Penzance, where we drove around the harbour and promenade, taking the “Strand”, which became Cliff Road following the coast to the small town of Mousehole. No coast road exists after Mousehole, so we headed onto country lanes, reaching the B3315, which took us most of the way to Land’s End.

Having visited John O’Groats, three years ago, we were looking forward to a similar rustic experience and getting the photo at the iconic signpost. While John O’Groats is still rustic and non-commercial, unfortunately the same can’t be said for Land’s End. Yes it still has the rustic coastline, but commercialism has taken over, trying to replicate your typical seaside resort. Even the signpost is a commercial venture and you must pay the photographer, if you want a photo at the signpost. 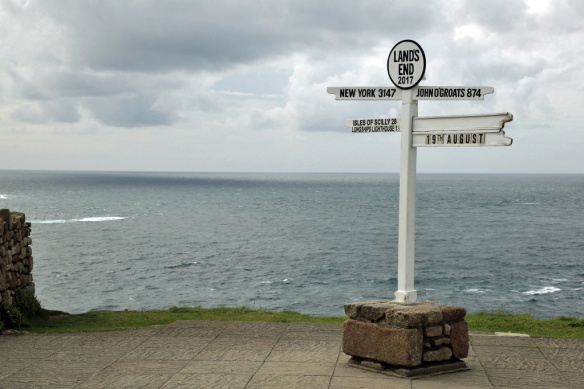 The signpost has a fence around it and the photographer in an adjacent shack. Signage is very clear – payment must be completed first, then they take your photo, which is mailed to your home. However, it is possible to stand by the fence with the signpost in the background. Due to the number of visitors, you can’t stand too far back, so depth of focus has to be managed carefully. 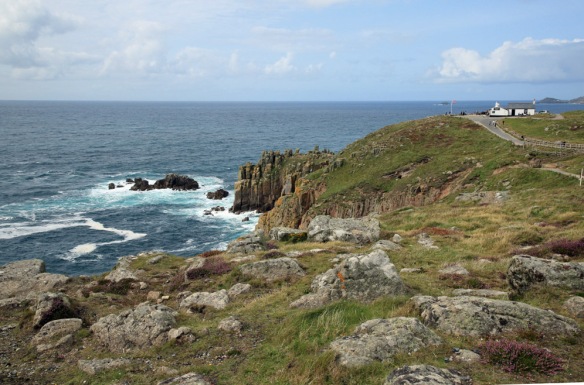 The above photo was taken about the signpost, looking along the coast to the first and last house (Land’s End), as John O’Groats has a similarly named house. 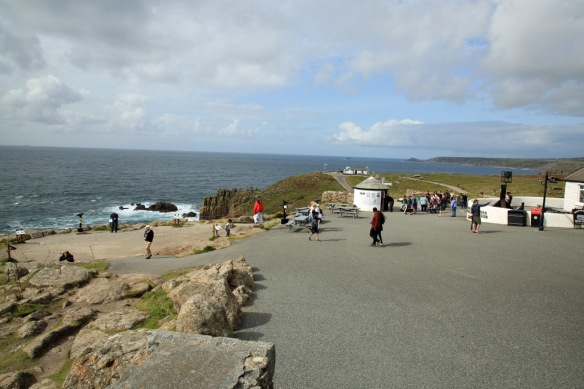 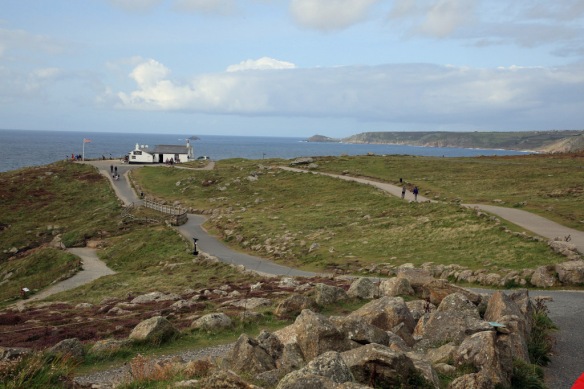 The Land’s End Visitor Centre was the biggest disappointment. A few shops were expected – cafes, bakeries, gift shops, etc. However, we do not believe that attractions – 4D cinema, Athur’s Quest, Shaun the Sheep, Ardmann Animations, etc. are consistent with the rugged coastline. If we wanted these activities, we would visit Brighton or Blackpool.

We obviously skipped the attractions, but did wander through the giftshop, picking up a couple of mementos, then headed to the Cornish ice-cream shop. With 4 of our objectives for the day achieved, it was time to head for # 5 – cream tea.

I researched the area and found Rosemergy Cream teas, at Rosemergy Farm. Wow, the drive along the B3306 was spectacular, with some incredible sea views. The farm was easy to find, with a number of signs along the side of the road. What a great first impression, as you walk through the gardens into the farmhouse, where you submit the order. You can sit inside, but with a sunny day, we opted for a picnic table in the garden. Excellent pot of tea, served in a Brown Betty Teapot, with fresh scones, lashings of clotted cream and strawberry jam. If you are ever in this area, we highly recommend stopping at Rosemergy Farm for tea.

This completed our 5 objectives for the day, so we set course for our condo at Clowance Estates, via St Ives. Departing the farm we encountered a local road hazard!! 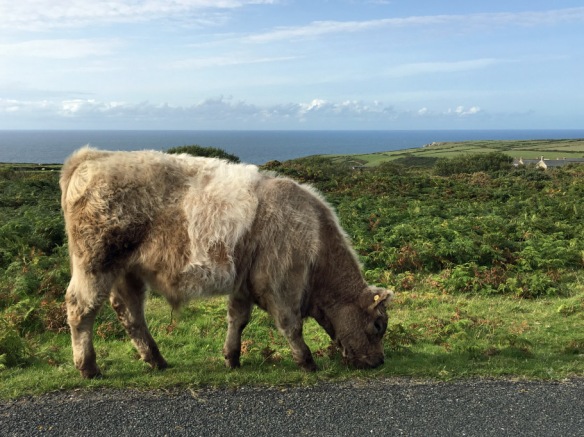 Cows wandering along the road

A few minutes after passing these cows, we met a farmer with his entire herd blocking the road, so we took an alternate route, which unfortunately was away from St Ives.

About 19:00, we eventually arrived at Clowance Estate & Country Club, which is an old manor house with many rustic condos built throughout the extensive gardens. Our 1-bedroom condo was fabulous; without a doubt, the best timeshare condo we visited in UK. Unfortunately, we only stayed 1 night, as we departed shortly before 05:30 the next morning.