My grandfather had season tickets at Ibrox, as did my dad for many years, so little wonder, I am a “Died in the Wool” bluenose. I may have spent almost 40 years in Canada, but I still follow Rangers F.C. Although I can’t get to the matches every week, I still keep abreast of news, follow the scores and watch matches on the telly.

With the advent of all-seated stadiums, the Ibrox capacity is reduced to just over 50,000, and most of those are purchased by season ticket holders. You can normally find single seats or even 2 seats fairly easily, but with with my dad joining us, getting three together only had availability in the nose bleeds. Being an older stadium, dating from the 1800’s, many areas are only accessible by stairs – no lifts or escalators.

Having my dad climb up to the 3rd tier of the main stand just wasn’t an option, so Judi suggested checking out the match day hospitality packages. This was part of my birthday present (one that ends in zero) and also another thank you to my dad for lending us his car for almost 5 months, both good excuses for a little splurge.

Rangers have numerous hospitality packages in various parts of the stadium, which vary from expensive to OMG, buying a house is cheaper. For us, this is a once in a lifetime opportunity, so we booked the Cooper Suite, for the match against Dundee on September 9th.

The tickets were received a week prior and they outlined the expected dress code (lounge suits) and schedule for the day. Kick-off was 15:00, so it was suggested we arrive at the Main Entrance about 12:45, with lunch commencing shortly after 13:00. After the match, the lounge remained open for refreshments for an hour. 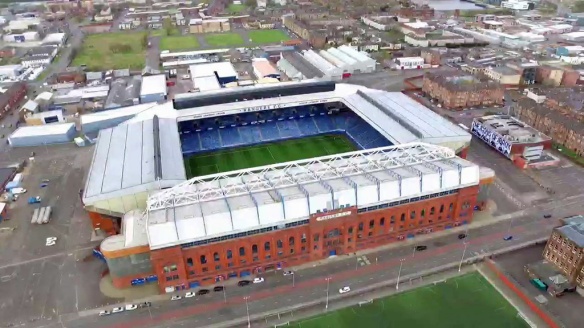 The day included unlimited adult beverages, so we took the train from Leuchars to Glasgow, then the Glasgow Underground to Ibrox. This was the first time on the underground for Judi and I, and the first time in over 60 years for my dad. As a kid going to the football, I heard horror stories of the underground, but we actually found it very safe and well operated. From the underground station, it was a short walk to Ibrox, where we visited the shop, purchasing replica kit and other items for our grandson. The “bluenose” family tradition continues through another generation. 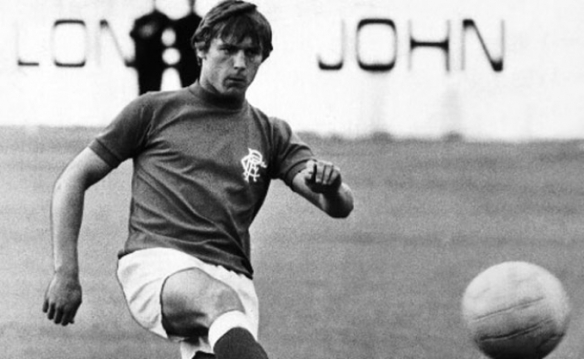 On arrival at the entrance, we were a little early, so were invited to take seats in the reception area. As we sat down, we received a visit from the famous Rangers winger Willie Johnson, also of Vancouver Whitecaps fame. I remember him vividly, as a great winger, while growing up in UK. Having played for Vancouver in the late 70’s, we had a great chat about the Lower Mainland.

Top of the marble stairs and entrance to Blue Room

We were invited to ascend the famous marble staircase, leading to the 2nd level in the main stand, then along the passageway to the Cooper Suite.

On entering the suite, our names were checked off, we were invited to help ourselves to a drink from the abundant selection available on the tables. We were then shown to our table, with a waitress arriving with menus and to take further drink orders. Judi and my dad ordered wine, while I ordered an ale. The Cooper Suite only had lager on tap, no problem, the staff went to another Suite for myself and the others that preferred dark beer. As soon as your glass got close to the bottom, a waitress returned to take refill orders – simply brilliant service.

Fortunately, an excellent 3-course lunch was provided to help soak up the beer & wine. We started with one of the nicest bowls of Scotch Broth, I have enjoyed in many years.

Following on from the soup, we were served a Fillet Steak – very tender, with lots of flavour, unfortunately they all came a little more well done than the medium rare we prefer. 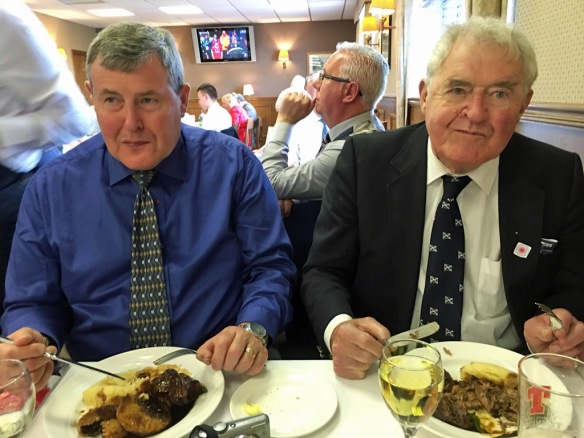 While enjoying our steaks, we received a very welcome visitor to the table – another legendary Rangers winger. We chatted away to none other than Willie Henderson.

The meal concluded with an excellent lemon tart.

After the match, which Rangers won comfortably, we returned to the suite, where we found another drink waiting. The staff continued serving drinks for over an hour after the match.

A truly magnificent day, both great football and hospitality package, with exceptional service and meal. An exceptional final activity in Scotland, as the following morning we headed to London for a couple of days before embarking on a Baltic Cruise.