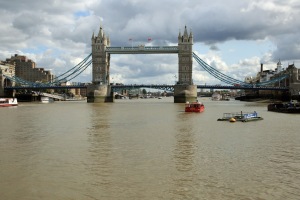 On our 2nd day in London, we had tickets for the Ceremony of the Keys, at the Tower, in the evening. Judi opted for a quiet day, while I visited some of the locations around our hotel.

I planned a round trip – Tower Bridge, south embankment, HMS Belfast, London Bridge, the Great Fire of London Monument, then back to the hotel along the north bank of the Thames.

It was a pleasant day, so I enjoyed an excellent walk, visiting some interesting attractions.

Departing the hotel, I walked down to the River Thames, staying on the Tower of London side of Tower Bridge Road, as the Tower Bridge tours start from this side.

The day I visited the bridge, the only tour available was the non-guided walk through the bridge and engine room. However, other tours are available, which I would have signed up for, if they were available:

From the customer service area, you take a lift to the top of the North Tower, where they have a short film running on a continuous loop. It covers some of the local history of the bridge. You then walk across one of the upper walkways towards the south tower.

Information boards are provided on both sides of the upper walkway. 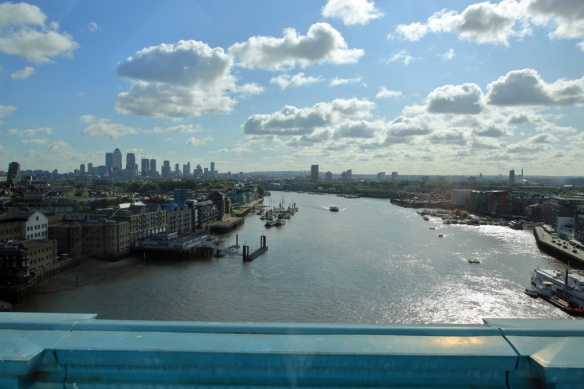 Looking down river towards Canary Wharf from Tower Bridge 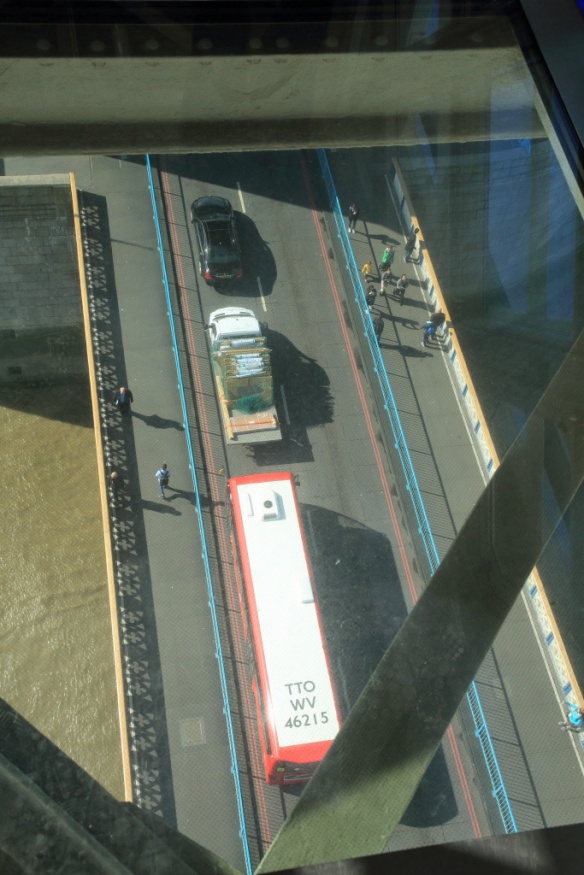 Looking through the glass floor panels

It was most interesting watching other visitors around the glass panels. Some would not walk on the glass, opting to squeeze up one side. Others were very tentative, while a couple of kids were jumping on the glass.

At the South Tower they have a film showing how the bridge was constructed. I originally thought the Towers were stone construction, but learned they are steel, with stone facing. 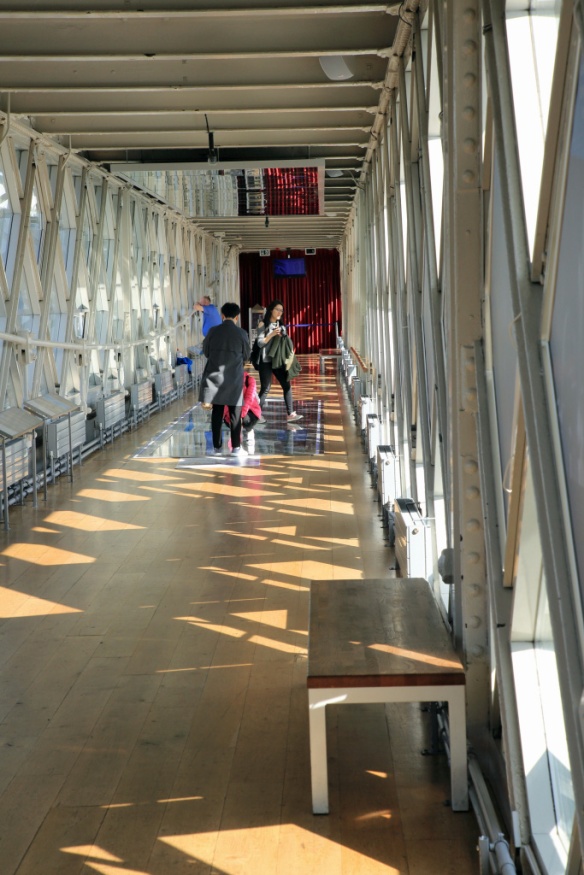 Up river side of bridge walkway

After the film, I wandered onto the walkway on the up river side of the bridge, which was much quieter than the other side, as this side is optional.

Looking up river with The Shard glass tower on left bank 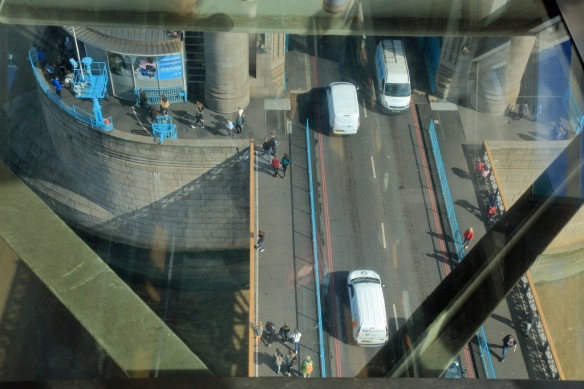 Looking down through the glass floor

Heading back to the South Tower, I descended a couple flights of stairs to about 1/2 way down, where you must board a lift for the final descent to the roadway. 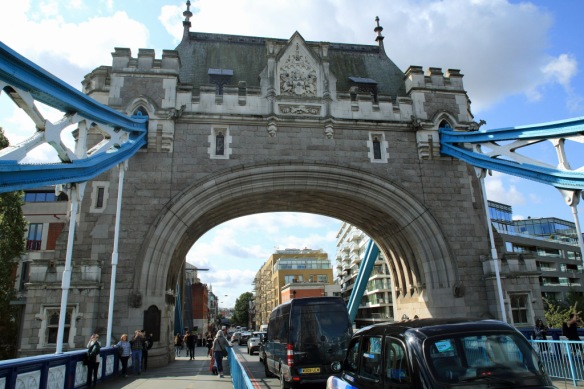 On the bridge deck, you follow a painted line, which leads to the Engine Room, on the South Bank. 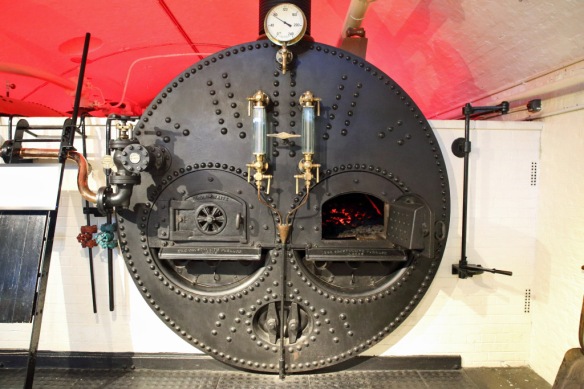 The boilers consumed about 20 tons of coal per week to maintain steam, for raising and lowering the bridge deck. 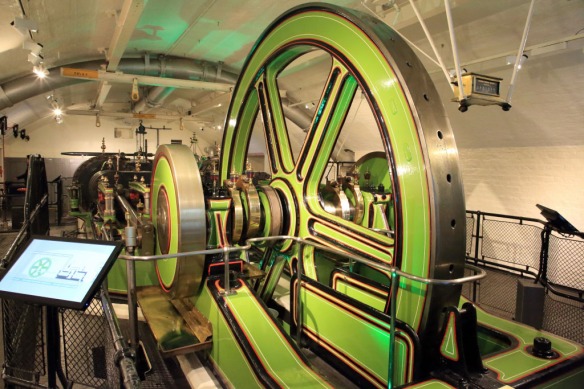 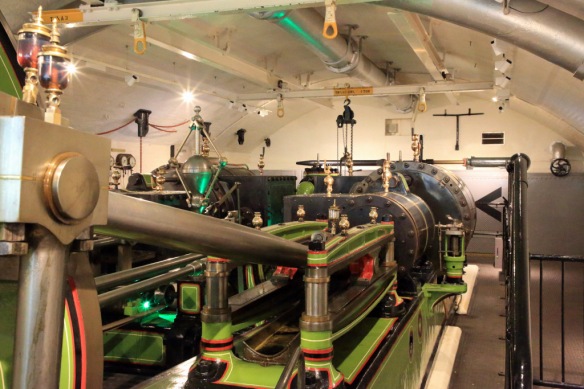 This completed the basic tour of Tower Bridge, so I headed down to the south embankment, walking towards London Bridge.

Tower of London on the North Bank

A Royal Navy light-cruiser, HMS Belfast was built by Harland & Wolfe in Belfast, she was launched in 1938 and remained in service until 1963. She served throughout WW II and Korea.

Entering the ship on the fantail, you receive an audio guide, which provides detailed notes at numerous points throughout the ship.

Departing the fantail, I wandered up fwd, checking out the 6″ guns. 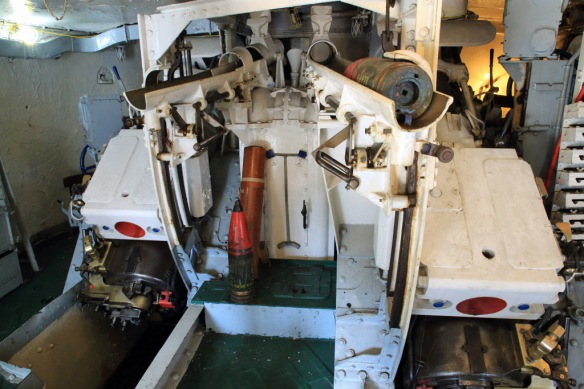 When the ship was moored, the guns were targeted at the Scratchwood Service Area on the M1 motorway. The normal range of the guns is 11.5 miles, with a maximum range of about 14 miles. Each shell weighs 112 lbs and the ship can fire 8 of them per minute.

In addition to not being armed, this is another of the big differences to the ships I worked aboard, as our steering stations were on the bridge. This one is almost in the middle of the ship, protected by armour plate. 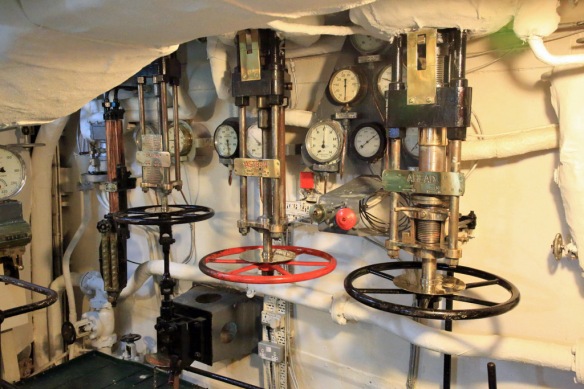 A year after the Great Plague, the survivors endured another disaster when the 1666 Great Fire of London started in King’s Bakery of Pudding Lane. The fire burned for 3 days, destroying about 80% of the City of London – consuming about 13,000 homes and almost all government buildings. 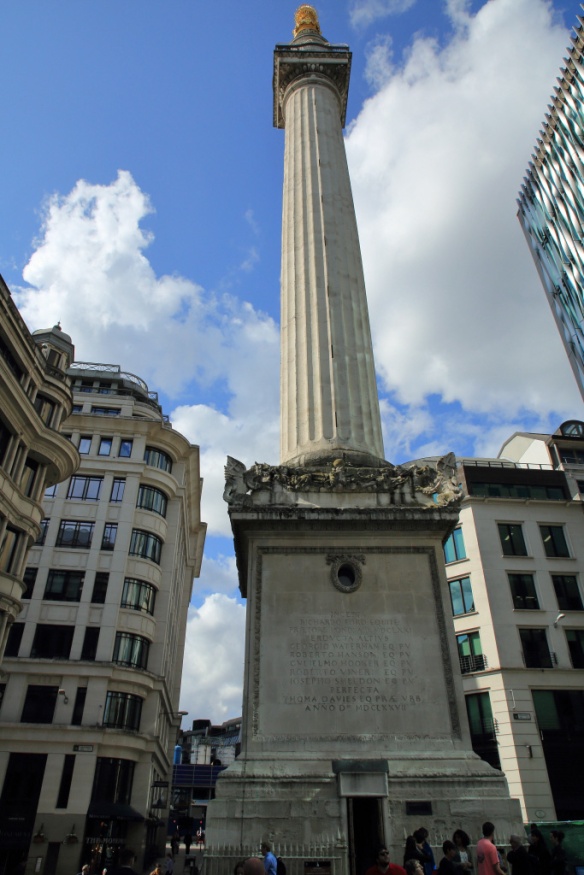 Constructed between 1671 and 1677, the monument is 202 ft high, which is the distance between the monument and seat of the fire. The monument contains an internal spiral staircase with 311 steps up to the viewing platform. Passing people at the lower levels is fairly easy, as the stairs are fairly wide. As you ascend the monument, the stairs narrow, so passing people going in the opposite direction is a bit of a challenge.

Yes, I made it to the top, having a couple of stops on the way up, to let others heading down pass safely.

View from top of The Monument

Exiting the monument, a staff member provides a certificate confirming you climbed all 311 steps.

Having conquered the monument, it was time to return to the hotel to pick up Judi for dinner and the Ceremony of the Key at the Tower of London.